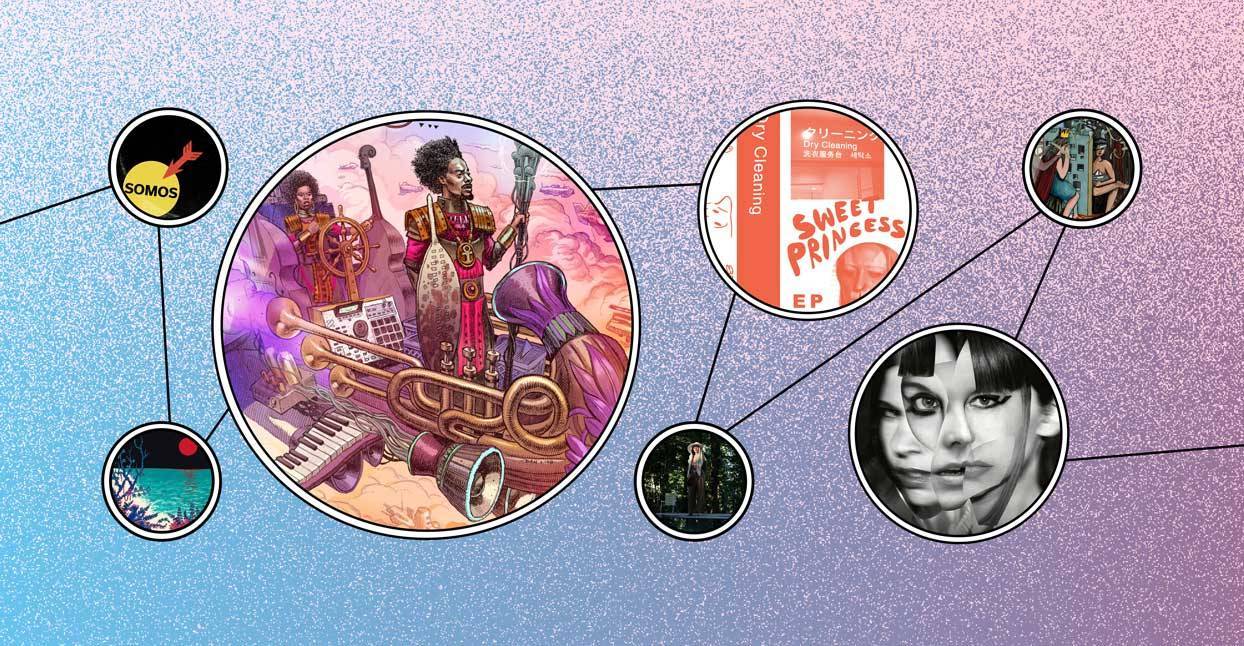 For anyone looking to get a quick sense of the vibe of the bracing debut EP from the London group Dry Cleaning, vocalist Florence Shaw provides a tip right out of the gate: “During what was probably the longest two-and-a-half months of my life after a near death experience, I could not sleep/…The only thing that kept me going was Saw 2.”  Dry Cleaning—emphasis on “dry”—use bleak humor and acid sarcasm as a way to cut life’s thousand tiny indignities down to size. You have to be a sharp writer to make this kind of withering wit work, but fortunately, Shaw is one of the sharpest. When a date goes south and Shaw returns from the bathroom to discover her would-be partner has ghosted, she offers, “I thought you liked me, but maybe I was just a captive audience. You did seem a bit bored when I was talking.” In “The Magic of Meghan” (which certainly appears to be about a member of the Royal Family, but I don’t want to jump to conclusions), Shaw tartly observes, “Never has one outfit been designed to send so many messages/ Earrings to empower women/ Bag that helps charity/ jeans made in Wales/ Cruelty-free coat.” Come to think of it, that line may be appreciative rather than cutting, but that’s one of the things that makes Shaw’s writing so good—it’s beguilingly difficult to read. The band surrounds her verse with the kind of jabbing guitars and lockstep rhythms that defined their home country’s post-punk years, bands like Delta 5 and the Au Pairs. Shaw would probably hate that comparison—but I bet she’d write a killer song about it.

Black Love & War by couple G&D (Georgia Anne Muldrow and Declaime) is a futuristic funk project. The album is dripping with old-school Funkadelic-esque beats and clever lyrics. On the vintage sounding, “The Battle,” the duo encourages self-love, and Georgia sings, “Just open the pages, read the design.” On the soulful “Protect Yourself,” G&D are very clear about the need for reparations. Black Love & War is an album that merges themes of liberation with strong beats—it is not unlike past G&D projects in that regard. Of the album, Declaime says, “Truth fucks with people. This ain’t just music; it’s a message and a tool to raise up the spirit of the black race.” This is an album that is unapologetic and pulls no punches.

Now that they’ve ascended to hagiographic levels of what is essentially mainstream fame, it’s easy to forget that Sleater-Kinney were always kind of a weird band—even in the context of the 90s, when “indie music” actually was weird. Their music felt drawn straight from the void, passion and rage formed into song-shaped-songs that cut through to some deeper truth written in a language made up by the twin souls of Carrie Brownstein and Corin Tucker. While the band grew more confident and playful over the years, basically transmogrifying into Led Zeppelin by the time 2005’s The Woods rolled around, they were, at least, always more or less punk. They aren’t anymore, which is sure to break a lot of hearts but doesn’t need to. Though seventh LP The Center Won’t Hold is clouded by the abrupt departure of drummer Janet Weiss and some truly unfortunate press photos, the record itself is full of the same nervous energy, political engagement, and demands for visibility that have powered the band’s catalogue since the beginning. Producer Annie Clark leads Sleater-Kinney into artier, gothier territory, and some will miss the guitars, however much else remains the same. Brownstein may be the one in the spotlight these days, but Tucker (and her pipes) is the true star here, and the soul.

Maria Usbeck’s 2016 album Amparo was a soft, subtle collection of songs that layered pillowy electronics over gentle, bubbling rhythms. The result was something like synthetic Tropicalia—gentle music designed for relaxing beachside. Her sonics have shifted slightly on her follow-up, Envejeciendo. The mood is still languid, but this time out, the music feels more in line with early ‘80s techno and dance music. The album-opening “Adios A Mi Memoria,” with its wind-chimey synths and softly blinking rhythms, almost sounds like a distant cousin to the music on Kedr Livanskiy’s similarly backward-looking Your Need. But where that record often entered rave-y terrain, Usbeck’s approach is more subtle. Even when the tempo quickens, as it does on the ENIAC dance number “The Machine,” her voice still floats between whisper and tone. Topically, the album is concerned with the aging process, and that theme turns up on a number of tracks. On “Secret in Japan,” Usbeck outlines tips for leading a long life against a backdrop of synth tones that blink in and out like a defective Lite Brite; “Obscuro Obituario” opens with the sound of gently exhaled breath, before opening up just slightly with a tripping rhythm track and a synth line that sounds lifted from an old Commodore 64 RPG (Defenders of the Crown specifically, if you must know). And while the album’s topic—the contemplation of mortality—is a fraught one, Usbeck delivers the material with such tenderness it lands more like a lullaby than an obituary.

Somos
Prison On a Hill

For 99.9% of artists, surprise album drops are all about spectacle: breaking the internet, flipping the bird to record labels and leakers, and—all together now—doing it for the fans. Then there’s the Massachusetts indie-rock band Somos, who made their third album Prison on a Hill available for purchase this week (and this week alone) ahead of its street date later this autumn — not because they wanted to cause a viral disruption or make a statement, but because tragic circumstances demand proper tribute and prompt action. More specifically, they did it for Phil Haggerty, their 28-year-old guitarist, who passed away over the weekend; all proceeds from the LP—a heartfelt mix of emo ballads and pop-punk bangers, gussied up with some new wave—will help pay for his funeral expenses. It’s an especially fitting send-off for Haggerty, whose sultry, scraping strums lend an infectious frisson to standout tracks like “Untraceable Past” and “Ammunition.” A standout album for a strong cause: don’t wait around.

There’s something existential about Ex Voto, the excellent new full-length from much-loved 90s indie band Versus. An extension of similarly solid EP Ex Nihilo, which made an appearance in this column upon its release back in May, Ex Voto is a sci-fi concept record of sorts, with many of the songs dealing superficially with interstellar travel, suspended animation, and some sort of God-like figure to whom the band makes the occasional appeal for life or death. But rather than gazing into the void with dread, Versus sound curiously optimistic, not least of all because Ex Voto is also filled with genuine bangers. Though the band’s last proper record was released nearly a decade ago, the powerful songwriting and confident arrangements on Ex Voto make a strong argument that Versus might just be reaching a new career high. “In the far-flung future/ you will be unsung,” they sing on the jangly “Moon Palace.” With music this solid, not likely.

Fans and critics have a few choice phrases they like to throw around when describing the cadre of emo (and demo-adjacent) artists who’ve cropped up over the past decade. You’ve got your emo, your post-emo, your emocore, your emo revival, your Third-wave emo, the Wave, and of course, infamous strain known as emo rap. Such stylistic hair-splitting is actually pretty silly when you think about it; with the obvious exception of Lil Peep and company, the minutae distinguishing today’s bleeding-heart bands from each other—much less their ’80s and ’90s forebears—can largely be explained away by advancements in production, as well as emo’s omnipresence as a cultural movement in the early ’00s.

After listening to the The First Glass Beach Album, though, I’m starting to see how post-emo could be an actual “thing.” On this remarkable debut, the Los Angeles band treat the fundamentals of emo—nasal vocals, brittle guitars, creeping tempos —as the bedrock for the musical equivalent of a gigantic bouncy castle where everyone’s strung out on psychedelics, crying and laughing at the same time. Unexpected crossovers await at every turn, as the band snakes from nocturnal ambient ((“blood rivers”)) to auto-tuned jazz-pop (“planetarium”) to indie exotica (“yoshis island”) and back again, on and on off into the future. Call it post-emo, emo revival, weird-ass pop punk, or whatever else you’d like. Just make sure you give it a spin.