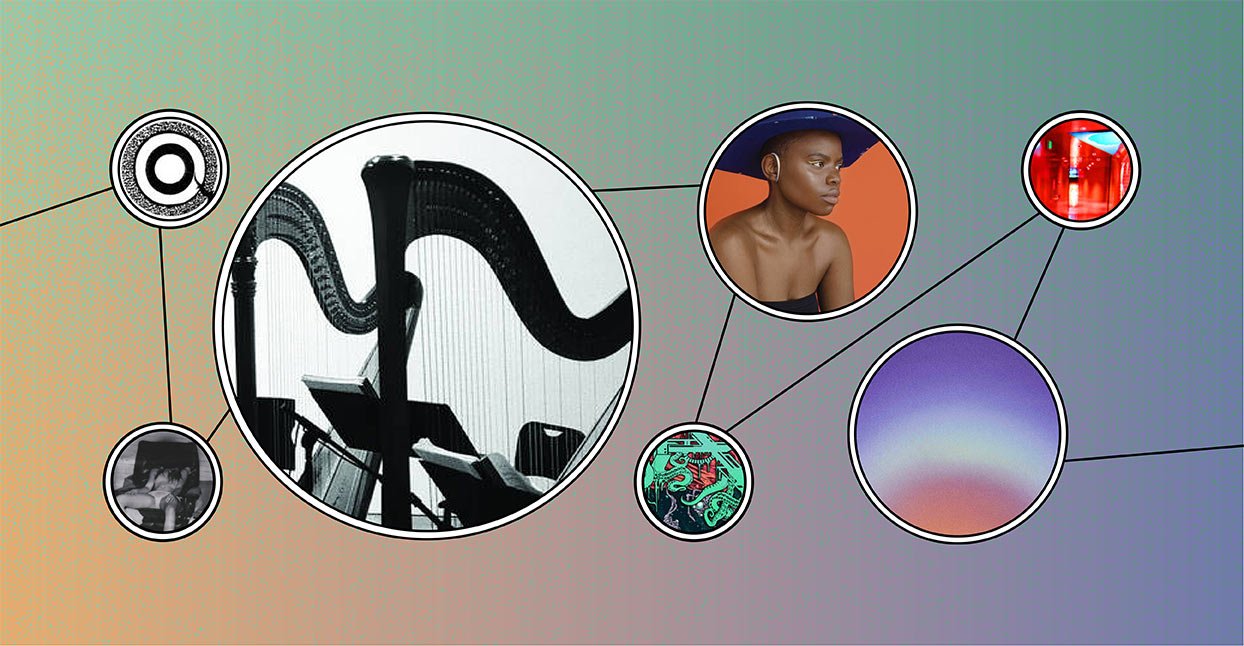 L.A. post-punk trio Behavior make deconstructed rock n’ roll, all odd angles, that fizzes with anxiety and burns with tension even in its most seemingly-languid, minimal moments. Take “Cheap Dive,” from their latest album, Spirits and Embellishments; a minor-key jangler in the vein of the ‘80s Boston suburban underground (think Native Tongue or Moving Targets), the track slowly breaks down to barely strummed guitar and abstract lyrics, only to gather up again and stutter to a stop. This is the group’s most playful work yet; sure, there’s plenty of their trademark bleakness to be found, but tracks like “Cute,” “Some Dear Sign,” and “Organic” have percussive shuffle and even, dare I say it, a little bit of pop’s cheeky charm (which has been peeking out from their sound for a while, but feels more fully acknowledged here). I’ve been fascinated by what Behavior do since their first album (the closest overall analog in my head is Swell Maps, which is a large compliment), and it’s a joy to me to watch them build a cohesive style and get comfortable within it across such broad, experimental terrain.

The list of collaborators on the latest album from Canadian producer Jacques Greene gives a quick indication of its breadth. Everyone from the rapper Cadence Weapon to cellist Oliver Coates to synth experimentalist Juliana Barwick turns up in the album’s credits, a suitably broad roster for an album that is relentlessly determined to pool out in every direction. Greene works from a general base of dance music, but the way he approaches it is almost defiant. The press line on this record is that he approached the songs as if he were working with a band, which would be nothing more than a clever hook if the music didn’t actually sound that way. But that rethink is clearly audible—mainly in the cavernous drums on songs like “Drop Location” and “Do It Without You,” which have a resonance that feels strikingly organic. Genre-wise, Greene is all over the map, from the ambient house of “Let Go,” where waterfalls of synth cascade down over Rochelle Jordan’s winding R&B-like melody, to the bright and blinking “Sibling,” where fat, twitchy synths seem to flirt with retrowave. The album is held together by a kind of gliding ambience—a soft fog of electronics that hangs over even rambunctious numbers like the album opening “Serenity.” Greene and co-producer Jonathan Ford of the techno duo Ford & Lopatin created and followed a specific production rule book while making the record; as a result, Dawn Chorus hangs together as a cohesive work, even when Greene is pushing genre omnivorousness to giddy new extremes.

Laura Palmer’s DEATH PARADE
Among Us All

Portland band Laura Palmer’s DEATH PARADE’s overlooked 2018 EP release, Among Us All, receives a cassette reissue on Seattle’s reliably cool Halfshell Records this month, giving dream pop aficionados a second chance to sink into the cloudy embrace of the band’s alternately sweet and doomy guitar pop. This band’s music is as spookily atmospheric and darkly insular as the mood conjured by the television show they so shamelessly reference both in their name and even sonically, but there’s so much depth and shape to these songs it’s impossible to get hung up on aesthetics—though they are, let’s face it, a huge part of the charm with this kind of music. But LPDP have something most dreampoppers don’t, which is soul. Laura Hopkins’ gorgeous, velvety voice winds in and out of her grief-stricken melodies, her yearning torch songs coated with soft shoegaze shimmer that only serves to make them feel even darker and more sad for being so pretty at the same time. The only thing this band needs to change is their name.

Seattle-based R&B singer Falon Sierra is making music that transverses the line between soul and experimental. A self-proclaimed alt-R&B artist, her latest album, Damaged By System, is about self-definition and self-determination. On album opener, “What’s Wrong!?!?” Sierra sings, “I want to be adored,” to an uninterested lover over a piano-heavy beat with resounding synths. The track “CrazyInsane” sounds glitchy with light, airy electro pings that are expertly matched with Sierra’s syrupy vocals. On the hazy closer “Let Them [Sleep On You],” Sierra addresses listeners with a monologue about the struggles of making art in Seattle—a city undergoing immense and rapid gentrification. She’s clear about the weight of fighting to carve out a space for herself against the city’s current reality. The five songs on Damaged By System are a good introduction to Sierra’s sumptuous sound.

The debut album from Laetitia Tamko, who records as Vagabon, was bare-bones and guitar-based, springing from the indie rock scene centered around the Brooklyn venue Silent Barn, which also nurtured artists like Long Neck, Fern Mayo, Waxahatchee, and others. But her new record—and first for the major indie Nonesuch—she leaves that rough-and-tumble sound behind, opting instead for sleek, synth-driven pop music that perfectly complements her stunning, haunting voice. The change of direction pays off from the outset: “Full Moon in Gemini” is a masterfully controlled narrative of love and longing that Tamko tells using vivid, specific details, and the way her voice rolls through the lush bed of strings and electronics is like fog rolling across the top of the water. On “Water Me Down,” she gingerly strings syllables together over sweetly piping keys. In our interview with her, Tamko cites Frank Ocean’s Blonde as a reference point, and while the two albums don’t quite sound alike—though both share a fondness for languid, luxuriant tempos—the primary area of overlap is in their unflinching intimacy. In “Home Soon,” as strings bend and sway in the background like trees in a breeze, Tamko repeats, “I give it all away/ but I’ll be home soon.” She sings it with a different inflection every time—first remote, then determined, then, finally sorrowful. The words are vague, but the feeling with which she sings them makes them clear she has a specific recipient in mind. There’s a subtle irony at work: there is a lazy critical shorthand that pegs underproduced guitar music—the kind Tamko used to make—as somehow inherently more “authentic” than other styles. To listen to Vagabon is to realize how foolish that thinking is.

Xoth’s Interdimensional Invocations, my penultimate Spooky Friday pick, is a searing homage to Lovecraftian horror: Cthulu’s cold, desolate universe pressed to wax so that we might witness its majesty without our heads exploding instantaneously on the spot, like grapefruits in a microwave, upon exposure. Xoth aren’t the first cosmic metal band to come along — not by a long shot — but they’re certainly the nastiest, their oozing riffs reinforced by maddening screams and live-wire solos redolent of early-’90s death metal. Exorbitant doomsday tales like “Plague Revival 20XX” and “The Ghost Hand Of God” are filled with lyrical references to space viruses and alien overlords, the stuff of Ancient Aliens wackiness — and yet, the instrumentally-grotesque, lyrically-perverse manner in which they’re presented is nothing short of terrifying.

I’ve been waiting for the debut from Richmond dark punk band Sensual World (named for what I would say is an honestly underrated Kate Bush record) for a while now, and good lord, what a perfect album for the spooky month. Singer Julie Karr is possessed of a powerful voice, a country-soul howl that adds a particularly fascinating dimension to Sensual World’s sound. They’re clearly indebted to the Wipers (listen to those spindly, punchy Greg Sage-esque guitar lines, and the wash of reverb and delay over the entire album that makes it sound a bit like it’s transmitting from the bottom of a swampy lake), but Karr’s voice pushes them from a good band—enjoyable, smart songwriters, but not necessarily heads above the rest—to something ferocious and particular. When she recites “I’m coming, I’m coming, I’m coming,” at the end of “United States of Bullshit,” it is both a threat and a thrill.