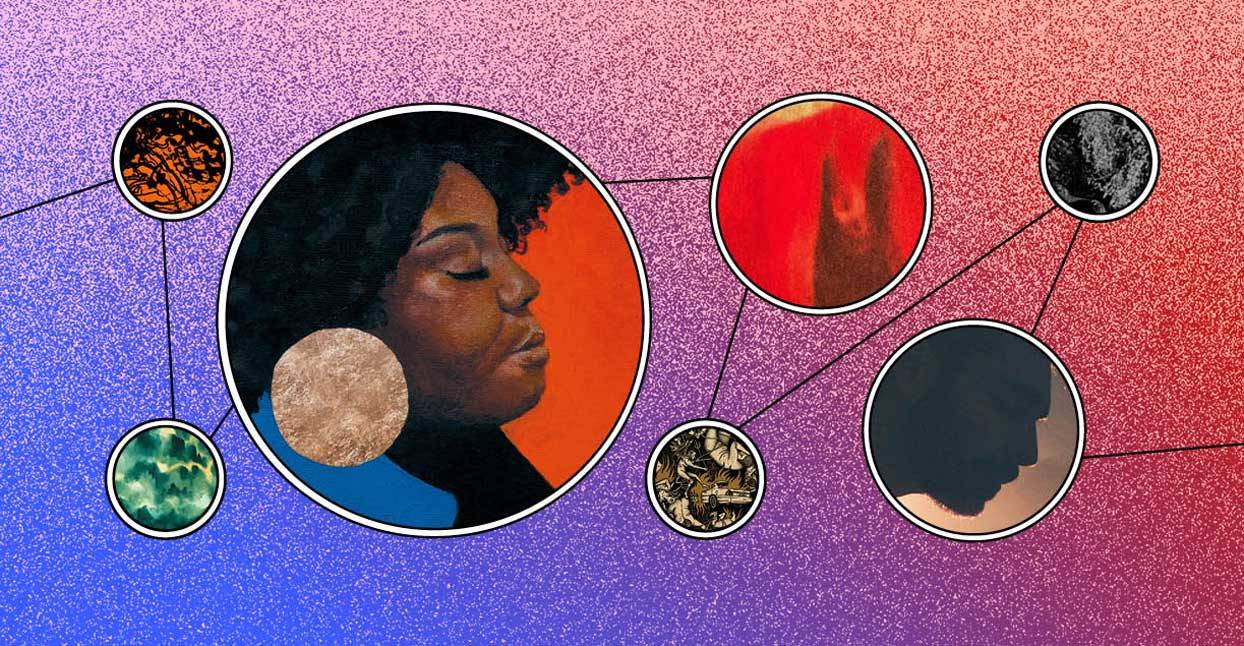 Los Angeles musician Jamael Dean is only 21 years old, but he’s already racked up an impressive roster of collaborations. When he was just 17, he was a member of Kamasi Washington’s live band, a role he also filled for Thundercat and Miguel Atwood-Ferguson. On Black Space Tapes, his debut for Stones Throw, he steps out on his own, creating a dizzying, kaleidoscopic record that has much in common with drone and ambient as it does with jazz and R&B. Witness the dizzying opener “Akamara,” where Dean and his band kick up a dust cloud of cymbal washes, darting flutes, and spiraling piano, making for a song that hovers rather than lunges. They change course entirely on “Adawa,” a ruminative jazz piece sewn up by a tense violin glissando and strolling piano. On “Olokun,” the album changes shape yet again—a dusky number squarely in line with the L.A. beat scene, the song is almost blotted out by a deliberately overdriven bass drum, and spliced into ribbons by sword-like horn lines. Black Space Tapes is the work of someone with vision—an artist who’s already considering where music should go next.

Self-inflicted Tide pod poisonings, Widespread Juul epidemics, potentially life-threatening viral TikTok “challenges,” social media bullying, imminent political, economic, and environmental collapse: Generation Z scares me sometimes, and not just because they make my entitled, lazy-ass millennial self feel ancient. Who I’m not concerned for are the teenaged members of God Alone, a new Irish metal band boasting a sick combination of mathy, Fugazi-indebted prog-punk, atmospheric black metal, and experimental post-rock, all with a Celtic lilt. Having beaten over 200 local acts to win Ireland’s Mammothfest Best Band fest, and with their first overseas tour under their belt, the foursome stand as one of the most precocious, promising heavy acts heard in the area as of late. This week’s eponymous LP only confirms that further, with four songs that menace as well as mesmerize—paralyzed by existential anxiety, and yet defiantly playful in practice, as evinced by the quirky album opener “Feeling on Tic.” Ok boomer(s); I think y’all can rest a little easier tonight.

Two years after winning over grunge-heads with their sweet-and-somber debut Dixieland, Flint, Michigan trio Greet Death return this week with New Hell, their second LP and first release for Deathwish, the beloved heavy-music label co-headed by Converge frontman Jacob Bannon. The track listing scans as a scorched-earth litany from a supremely pissed-off ex (“Do You Feel Nothing,” “Let It Die,” and “You’re Gonna Hate What You’ve Done,”) but the music’s as inviting as ever, blanketing the rancorous themes in hazy guitars, swelling choruses, and angelic vocals. Arranged thusly, the 10-minute title track, a rugged behemoth teetering on the verge of collapse—feels like a beautifully-unsettling dream, or at the very least, a graceful nightmare. Highly recommended for fans of Nothing, No Joy, and Quicksand.

Imagine you’re going to the symphony. The work being performed—by a massive philharmonic orchestra—is dark, doomy, and foreboding. (I don’t know enough about classical music to make the right reference here. Just imagine something scary.) The work will be performed with a vocalist. You get to the theater, settle into your seat, and the orchestra begins playing the first movement. The vocalist steps to the mic, opens his mouth…and unleashes a fetid, demonic, black-metal roar. That’s the experience of listening to Les Chants Du Hasard’s Livre Second, the latest confounding release from the consistently astonishing Italian label I, Voidhanger. Since their inception, the label has built their name on ruthlessly subverting metal tropes, and with Livre Second, they’ve topped themselves yet again. Theoretically this could be called “symphonic metal,” except “symphonic metal” is an actual genre, and this sounds nothing like it—there aren’t even guitars on this record. Instead, it’s 10 fully orchestrated pieces, all of which sound like an army on horseback storming the gates of hell, topped with the vocal style from A Blaze in the Northern Sky. In other words: it’s sick as hell. It takes a lot for me to say this, but the truth is I don’t think I’ve ever heard another record that sounds like this one—a crash-course of two diametrically opposed musical worlds, meeting at the lake of fire’s rim.

When we interviewed Camae Ayewa, A.K.A. Moor Mother, about her latest album, Analog Fluids of Sonic Black Holes, she was clear as day about her purpose and methodology: building a sonic history of America—built on the removal of native people and the enslaved labor of Black people—that stands counter to its founding mythology as the “land of the free.” In doing so, she connects the past not just to the present but to the future. Though her work is, as always, bracing and confrontational, it is also shot through with hope; I was reminded, listening to it this week, of how during therapeutic practice, when one opens up old wounds, it may hurt more temporarily, but this is done in the service of healing. One cannot heal if one keeps hiding, shoving things down.

Loops and samples of archival recordings are used throughout, the voices of the Black American past speaking and singing with Ayewa. Every artistic decision she makes here is vivid and meaningful. On “Passage of Time,” she brings in her family’s history as enslaved people directly; one of the core repeated lyrics (“It’s so soft”)  contrasts the softness of cotton with the cruelty shown to the people who picked it, over a strong rhythm clearly referential to West African folk music. On “LA92,” Ayewa’s distorted voice and spine-prickling electronics call up the grief and pain that led to the LA riots, referencing Rodney King and the murder of Latasha Harlins. On “Black Flight,” an anxious ode to both the power of escape and Afrofuturistic innovation, Ayewa builds a constant sense of urgency, but also space for musician/poet Saul Williams, whose voice dissolves back into the music as he finishes his piece, to speak beautifully on the connections between the modern-day prison system and American slavery and the power of breaking the bars. (If white flight is motivated by hate and fear, a negative, Black flight is motivated by hope and survival, a positive.) With each new work, Ayewa’s vision becomes sharper, her voice stronger, her imprint on this world more powerful. That sure sounds like the healing process to me.

“There are two kinds of people, the mad and the blue,” sings Montreal indie-artist Leif Vollebekk on “The Way You Feel.” The song opens and sets the tone for Vollebekk’s fourth album, New Ways. Vollebekk signature is creating melancholy, yet delightful R&B-tinged folk songs and New Ways does not waver from this standard. “Change, what it does to me, bottomless as the sea,” sings Vollebekk on the catchy and aptly named “Change”. Single “Transatlantic Flight,” melds Vollebekk’s illustrative lyrics with a steady, heavy-hearted keyboard melody and the head-nod inducing “Blood Brother” highlights his smouldering voice with elevating guitar strums and drum beats. Vollebekk leaves listeners with the folk love song “Apalachee Plain,” that ends the album on a hopeful note.

Yazin Lacey makes slow, sultry music. The British soul singer’s 2018 album, When The Sun Dips 90 Degrees, is a formidable entry point to her sound. Lacey has said that she didn’t intend on becoming a professional singer which is hard to believe once one hears the way she marries jazz, R&B, and funk to create a singular sound on her five-song EP. The neo-soul melody of opener, “90 Degrees” brings to mind Erykah Badu and Lacey’s sensuous voice shines as she sings, “I have no money in my pocket.” Lacey’s understated and compelling songwriting stands out on the experimental jazz track “Burn & Rise” where she sings “There is a time I know, where we will burn and rise,” over a steady piano melody. When The Sun Dips 90 Degrees is a slow burn that is well worth the wait.