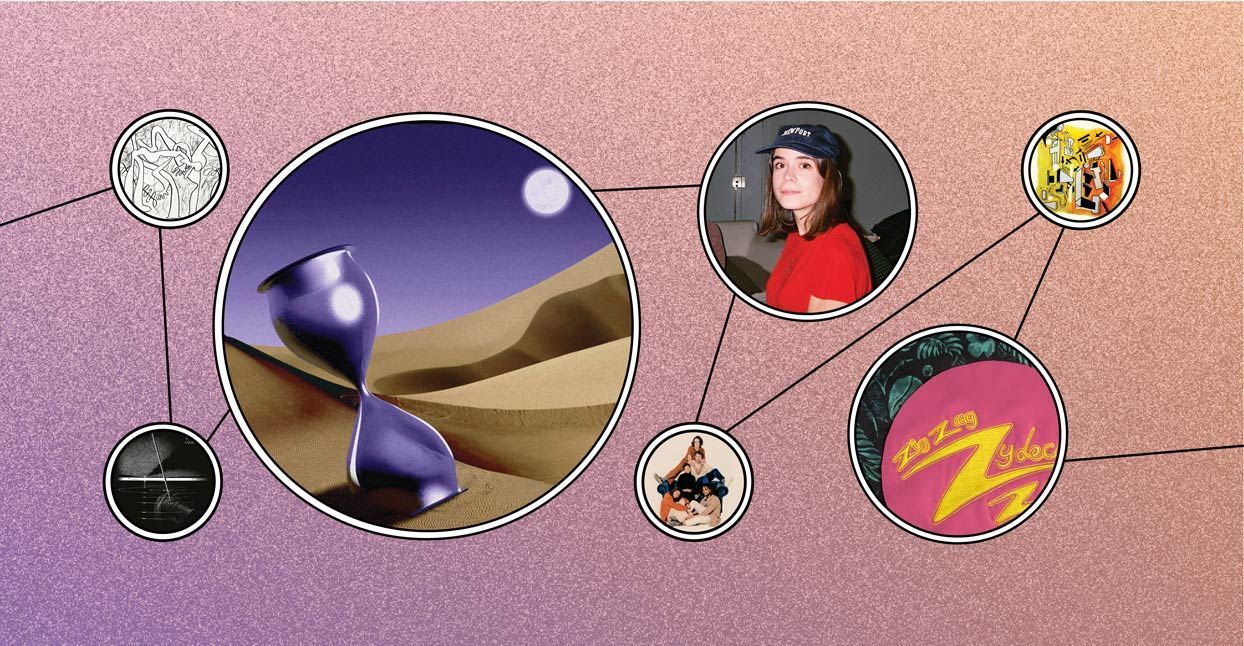 Barrie
Happy to Be Here

New York-based Barrie is making infectious and dreamy pop music. The band consists of members from around the world including, Dominic Apa, Spurgeon Carter, Sabine Holler, Barrie Lindsay and Noah Prebish. Their latest album, Happy to Be Here, opens with the nostalgia-tinged synth-pop “Darjeeling” that repeats, “Stay, keep me here for a while. Stay, you can leave when you like.” On guitar heavy “Habits,” Lindsay croons, “I’ve got my habits and I’ve got time.” Other album standouts include the yearning “Saturated” and the wistful “Geology” where Lindsay sings, “Oh skipping every other step, who knew what else was coming?” Happy to Be Here is a satisfying album from a band that knows their sound and where they’re going.

Failed Entertainment, the highly-anticipated second album from SoCal hardcore hardcore band Fury, quite possibly the best thing to result from a severe identity crisis in recent memory (or at least since Elon Musk’s blunted, public fall from grace). In the wake of 2016’s debut album, Paramount—a record unanimously praised by music critics and moshers alike for ushering in a new era of Orange County youth crew—the band found themselves at a crossroads; would Fury remain a hardcore band in the traditional sense, forgoing evolution despite its members’ creative restlessness, or risk it all and break the rules? According to frontman Jeremy Smith, Fury’s original choice was to quit while they were ahead, lest the results come out undercooked (“It’s hard to do a full-length that’s interesting for any genre,” he told Bandcamp). Thankfully, they changed their minds, went “fuck it,” called up Nirvana producer Jack Endino, and made a arena-sized post-hardcore album that sounds like Gorilla Biscuits drowning in Quicksand. Part of the success is owed to the technical improvements made across every vertical of Fury’s pummeling sound, especially the riffs, which skew so snarled and seething that they practically gnaw on your eardrums. Failed Entertainment also passes muster because the songs pull no punches and contain no bullshit noodling or try-hard bullshit, only chiseled rage and FM-ready hooks. Thanks for not breaking up, guys!

Hexdebt hail from Melbourne, but their take on post-punk is full of spitting anger and hot rage with nary a jangly guitar in sight. Their venomous debut, Rule of Four, is ruled by rhythm and nearly fairly vibrates with fury—every guitar riff, drumbeat, and vocal line commands the ear’s attention with its forceful presence. Yet this is not a competition, and the band maintains control over their sound even when the whole thing threatens to tie itself into an unworkable knot. Hexdebt work as a cohesive unit of equal parts, the better to overthrow capitalism with.

Le Winston Band are a quintet from Montreal who specialize in zydeco, an upbeat blend of blues, jazz, and Creole folk which is closely related to, though not synonymous with, Cajun music. Their songs come from a long, tumultuous, process of cultural diffusion, which began with the Great Expulsion of the mid-18th century (Britain’s forced deportation of over 11,000 French colonists from their home in present-day Nova Scotia, to other British-American colonies, primarily Louisiana); flourished throughout the 18th, as colonists settled into their new home and began taking cues from their neighbors (indigenous and African-American communities, as well as stragglers from the Spanish occupation); and finally entered popular consciousness in the 20th, thanks to an emergent public fascination with all things folkways. In other words, they play old-school, New-World party music, with a humble palette — spirited accordions, simple guitars, peppy vocals, shuffling tempos, rattling washboards, — and a jubilant spirit. Le Winston Band’s latest, Zig Zag Zydeco Zoo, parlays the group’s deep reverence for zydeco into an fun-filled, 14-song romp that makes me want to invite all of my Facebook friends over for a big ol’ crawfish boil in spite of my aversion to cooking arthropods alive. Oh, and it sounds a bit like ska, which is a plus. Anyway, Allez!

Scrap Brain
A Journey Into Madness

This is a hell of a week for hardcore LP debuts—Khiis’ Bezoar and Terra Soror’s Revenge both roared out of the gate swinging this week too, and are worth your ears and coins. I have been ludicrously personal in this column before, so I won’t mince words—I’m writing about Scrap Brain’s A Journey Into Madness because I could only choose one hardcore record to write about this week, and this record is not just really really good, it resonates with my personal state.
Scrap Brain are a U.K. band who play raucous hardcore—noisy, crammed with delightfully ignorant riffs (this is a compliment), walls of feedback, and pounding percussion. They’re one of those bands that sound as if the centrifugal force generated by their collective fury is the only thing that’s keeping the music from flying apart. This is a surprisingly difficult sound to master, and, in my experience, it only communicates if the group is sincere in their message. A Journey Into Madness is about being queer and mentally ill in a world that is amenable to neither, holding onto dry humor as a way of dealing with daily struggles (the promo for this album includes an extremely perfect Vengaboys cover, should you wonder whether this is a pedantically self-serious group of people). They’re able to vacillate perfectly between that survival strategy and painful self-excoriation; on “Crybaby,” for instance, the way the singer turns a sneer into a howl (“If you see something, saaaaaay something”) speaks far louder about the ways in which we surveil and are surveilled than any self-righteous condemnation could. “Independent doesn’t mean radical!” they spit on “Floundering,” in which the usefulness of the DIY community, such as it stands, is examined. In an arbitrary and absurdist world such as ours, a warped viewpoint—question yourself, question everything—can often create more worthwhile critique than a “normal” one, whatever that is. I’m thanking a deity of my choice for my own fucked-up brain, and thanking one for Scrap Brain.

On their third album A Quiet Ritual, the Bath group Snow Ghosts walk a tightrope between mystery and melancholy, spinning out lush, haunting songs that tremble and heave and sigh. Some of that is baked into the process: the album, described by the group as a meditation on death, was recorded in a castle in Wiltshire, and employs an ancient instrument called a carnyx, which has to be seen to be believed. (The album’s carnyx player, John Kenny, is one of the few living musicians who knows how to operate the instrument). Its high, wailing tones serve as a kind of introit on aptly-titled album-opener “Keening,” kicking the song open for vocalist Hannah Cartwright’s ominous, imposing alto. The first words she sings are, “You were there to rip apart, to rip me apart,” and from that moment on, A Quiet Ritual plunges steadily downward into darkness. There are elements of the music here that sounds like late-period Scott Walker, but all of them are balanced out by moments of devastating beauty. On “Heavy Heart,” Cartwright’s voice sails soft and lonely above steadily swelling church organs; on “Ribcage,” she slaloms through big blinking columns of synth and looping chiaroscuro strings. Much of A Quiet Ritual deftly blends industrial’s grind with classical music’s beauty—I was tempted to open this writeup by saying “Imagine if Enya had recorded Pretty Hate Machine,” but that doesn’t quite capture what’s going on here. Songs like “Surrender” are too plaintive, too shot through with genuine longing, for that simple RIYL to suffice. A Quiet Ritual brings a kind of medieval beauty to the modern age—it’s immaculately textured, and deeply moving.

How could we have slept on this! Released in March of this year, Yawners’ Just Calm Down is a record full of big, exhilarating guitar rock songs that are sometimes pop-punk, sometimes power pop, and sometimes Pavement, but always delivered with so much heart-eyed sincerity that it would be mean to dislike them even when Elena Nieto is singing about Instagram. Nieto’s huge, wide open vocals and ultra-bright hooks give Just Calm Down the feel of a shook-up bottle of pop: always on the verge of exploding into something even greater than what’s on record here, and what’s here is already pretty great.