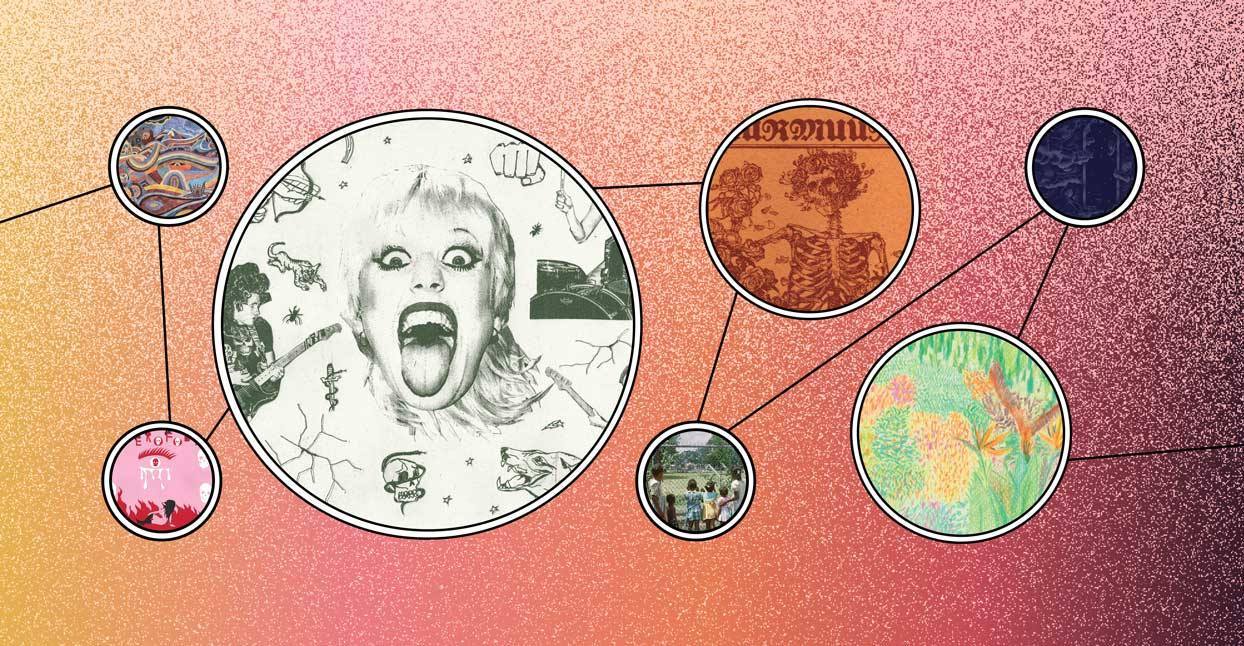 With their jokey name, thrift-chic wardrobe, and snotty, rambunctious live show, Melbourne’s Amyl & the Sniffers present as punk. Their early EPs made good on that look—“I’m Not a Loser” wouldn’t have sounded out of place on Singles Going Steady—but on their first full-length for indie titan ATO, the band they most resemble is Bon Scott-era AC/DC. (And no, it’s not just because they’re Australian.) Amyl & the Sniffers mostly traffics in devilishly blown-out blues licks, some of which strut and gallop (“Starfire 500”), others straight-up stampede (“Monsoon Rock,” “GFY”). But there’s a good reason singer Amy Taylor gets a standalone mention in the band’s name: her pissed-off wail operates between two poles—ferocious anger and withering disdain—and she scorches every single note she gets ahold of. Like Scott, Taylor knows the trick to being a rock singer isn’t the tone but the expressiveness; in songs like the raucous “Gacked on Anger,” she punches each single-syllable word with equal force then stretches out the last word in each line, making the lyrics feel like Morse Code written in all-caps. She’s a blinding blue streak tearing through the middle of every song, shoving over anything stupid enough to get in her way.

With Astres, French duo Epectase have released one of the more confounding metal LPs in recent memory. For example: Six minutes into the black metal barrage of opening track “As He Runs Towards the Stars,” the band pauses to unveil a guitar figure that could have been plucked from any ‘90s Jade Tree-era emo album. Needless to say, Epectase fit right in on the Italian label I, Voidhanger, who have been quietly redefining the scope and shape of heavy music for the last decade. Like most of the label’s releases, it’s impossible to reduce Astres to an elevator pitch. Over the course of its 67-minute runtime, the album makes stops at black metal (most often), death metal (right behind), but then also prog, glassy-eyed shoegaze, and whatever the 11-minute “Solar Winds – Climax” is (it starts out as a poem whispered over ambient synths; it ends with what sounds like Gregorian chants over triumphant post-rock riffs). But simply describing the way the music sounds doesn’t really get at what it is the band is up to—the album traces an individual’s journey into their own consciousness, and the more you listen to it, the more the wild shifts in style and tone seem to give that voyage a kind of Homeric scope. Astres may be sprawling, but it never feels unwieldy. By the time you arrive at the strangely beautiful “La Mer Pourpre,” with its arresting, mournfully sung vocal melody, it feels like you’ve crossed galaxies.

The guitars that open “Huele A Muerte,” the strong first track on Queremos Ver El Mundo Arder, have the cadence and effects common to death rock—that plangent chorus pedal—but they’re tuned so as to sound as if they’re constantly warping. This is a perfect introduction to Heterofobia, a queer punk group from Monterrey, Mexico, whose take on dark punk is a lot more vivacious and rough-hewn than the polished obsidian of many of their fellow travelers. A Christian Death-style open can take a sharp turn into ripping hardcore without sounding abrupt (“El Infierno”); an almost surf-y guitar line is grounded by thick bass, pounding percussion, and urgent vocals (“Ricones Polvorientos”). They can sound cavernous (“No Podemos Ser”) or incredibly immediate (“Me Des Asco,” with its delightful gang-vocal titular chorus). The penultimate track is a spirited cover of Madrid ‘80s punks La Uvi’s “Ya está bien,” a welcome homage. Heterofobia share their singer, Dani, with Cremalleras, and fans of that group (of which I am one, having covered them in these pages before) will recognize the raw mix, undeniable urgent fury, and distinct perspectives. Just a killer release from beginning to end, a real breath of life amid the cobwebs.

A pillowy merger of pop, folk, and psychedelic rock, the latest album from Portuguese singer-songwriter Luís Severo represents the platonic ideal of late-springtime listening: a cadre of laid-back compositions which feel as breezy and comfortable as a well-worn pair of chinos. His arrangements skew chill with a capital C, from the the sparse balladry of “Primavera” to the balearic grooves of “Domingo;” his croon is light and honeyed, the musical equivalent of gelato melting in the sun. It’s vernal bliss, plain and simple — the kind of music that makes me want to go out and lounge in a stranger’s hammock (after offering them some store-bought lemonade, of course).

Mavis Staples
We Get By

Simply said, Mavis Staples is a legend. The septuagenarian soul singer has enjoyed an illustrious career that has spanned over 60 years. The Chicago native got her start in 1950 in her family’s band, the legendary Staple Singers. With We Get By, Staples’ 14th studio album, she shows no signs of slowing down.

We Get By comes out swinging with bluesy opener, “Change”. “Change” is a call to action in the tradition of the Civil Rights Movement. Staples acutely sings, “Say it loud, say it clear, things are going to change around here.” The titular song, We Get By (featuring singer and album producer Ben Harper) is a slow, guitar ballad that opens with Staples singing, “We get by with love and faith.” Elsewhere, Staples gets sermonial with the upbeat, bass-heavy, “Brother and Sisters”. The album ends with a call back to the opener with, “One More Change”. Whereas “Change” is a call to action, Staples turns inward with the soulful closing song. “Been running too hard to slow down,” she sings. We Get By’s 11 songs harken back to Staples early career and is a timely offering by a beloved voice.

Following up an excellent but brief 2017 EP, the debut full-length from “outernational super-quintet” Derya Yıldırım & Grup Şimşek expands upon the band’s combination of Anatolian rock and the kind of colorful psychedelic pop peddled by mid-60s British groups named after chocolate bars. This time, however, they’ve given themselves space to stretch out into the stratosphere with proggy instrumentals and jazzier interludes, though Yıldırım’s rich and expressive voice and the prominent placement of the Turkish lute are still the band’s sonic calling cards. Compulsively listenable, Kar Yağar has the warm and familial feel of a jam session at times at times, which makes sense as the record was self produced at the band’s studio in in France. Really groovy and quite original in a lot of ways— a rare quality in this section of the record store.

Blackened hidden gems don’t get much better than this 2011 release, the sole musical spawn of a French musician by the name of “One.” You want sweeping, atmospheric shoegaze guitars à la Deafheaven? Murmuüre’s already done that. How about that grainy, industrial roar all the cool metal bands are using these days? Murmuüre’s already done that, too. Perhaps you’d rather fill your ears with dungeon synth-esque sound collages or sprightly flutes? Or just some good old fashioned, heavily-distorted screaming? Say it with me, folks: Murmuüre’s got you — and what’s more, mr. One assembles everything in a layered, organic fashion that actually makes sense, even if the Grateful Dead-inspired cover art is a bit of a red herring. No 420-friendly jams here, just preternatural bad trips, and lots of them. But it’s a blast, I promise.