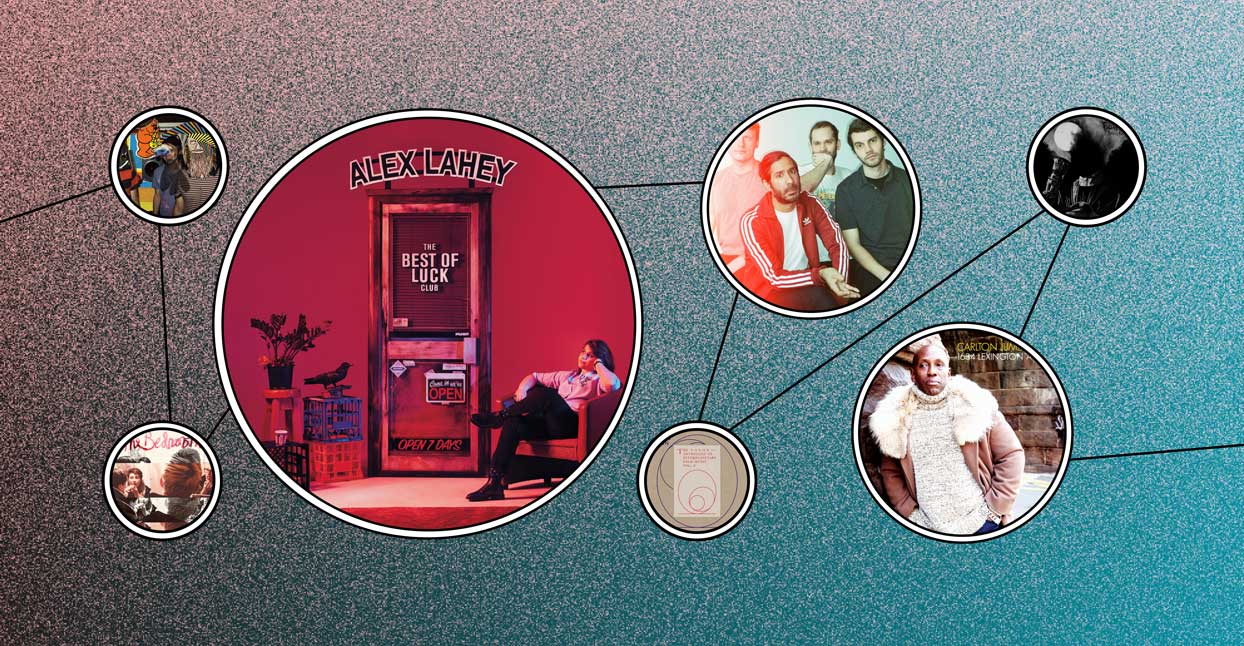 One of my few quibbles with Lizzy Goodman’s mostly-fantastic 2017 oral history, Meet Me in the Bathroom: Rebirth and Rock and Roll in New York City 2001-2011, is its reduction of Black Dice—the frenetic grindcore-turned-experimental-noise group, one of the primary galvanizing forces powering DIY in the Big Apple—to a passing mention. (To wit, the White Stripes get more face time, and they’re from Detroit.) Then again, history’s a matter of interpretation: what matters is the source material, and this remastered compilation of the band’s earliest-recorded (read: long out-of-print and highly sought-after) output is as much a time capsule as it is a time bomb. Recorded between 1998 and 2000, these 18 songs recall Black Dice’s primordial punk days through an HD lens that doesn’t render the tracks any more accessible than they were to begin with (which is to say, not much), but exponentially more potent. Listen to “Synapse Synapse,” and then answer me this…does that sound like a footnote to you?

Weeping Choir, the latest album from Full of Hell, is a god-fearing record in every sense of the word. The East Coast quartet’s death-grind epistemology—itself an extension of the blasphemed gospel showcased on their previous LP, Trumpeting Ecstasy—contains zero references to messiahs, deus ex machinas, hope, or forgiveness; paradise is forever unattainable, atonement is impossible, and punishment lasts an eternity. Highlights like “Armory of Obsidian Glass” and “Haunted Arches” however ugly-sounding, are grounded in stunning, even austere architecture, arrangements sporting all the stylistic finery associated with the band’s various incarnations up to this point, topped off with production from the always-reliable Converge‘s Kurt Ballou. The filth-ridden grindcore of their early days, the experimental noise showcased on collaborations with Merzbow and the Body, the present, astral-projecting carnage of the here and now: it’s all been crammed into one eardrum-searing confessional with reverence and care. A miracle, if you ask me.

Formerly a noisy, vaguely mathy guitar rock band, Greys take a big step forward with the adventurous Age Hasn’t Spoiled You, a record that consistently surprises with its sharp twists and turns through a litany of buzzy, bummed-out late ’90s/early ’00s alt-rock references that remain unpredictably (but not illogically) constructed no matter how many times you listen. Though it aims to unsettle and its mood is far from happy, Age Hasn’t Spoiled You is a good time in that there’s something inherently cool about a record made by a band that’s not afraid to look like they’re trying.

Carlton Jumel Smith’s album, 1634 Lexington Ave., is bursting with old-school soul. The New York veteran singer has crafted a classic soul album full of love ballads. Opener, “Woman You Made Me” is an infectious tune about the delights of falling in love with a vintage beat. Another standout, “We’re All We Got”  moves away from romance and focuses on the importance of coming together. Its beat changes the pace of the album with uptempo trumpets and heavy percussion. It’s reminiscent of the various 1970s era songs of the same nature. Smith ends the album with “I Can’t Love You Anymore” a melancholy ballad that is a good answer to “woman You Made Me”. What makes 1634 Lexington Ave. so enjoyable is its clear nod to the soul of yesteryear with a clear vision for the future.

Alex Lahey rocketed out of Melbourne in 2017 with a stack of Mutt Lange-style choruses and wry lyrics about her penchant for self-destruction. The euphoric I Love You Like A Brother was wall-to-wall bliss—barnstorming hooks and gigantic, shellacked gang-vocal choruses, playing out like a reckless, amped-up Friday night bar crawl where all the drinks had Red Bull in them and the shots arrived early and often. Fun as it is, that kind of hedonism can have consequences, and The Best of Luck Club is the next-day hangover, staring bleary-eyed at the credit card bill for the indulgences the night before. The first words on the first song are “I’m sorry,” and Lahey spends the next 40 minutes clocking the things she’s lost in the previous two years: a social life (“I Don’t Get Invited to Parties Anymore”), a sense of self (“Am I Doing It Right”), and, possibly, a relationship (“Unspoken History”). Lahey’s sharp wit and fondness for towering hooks remains intact, but there’s a sense of sadness undercutting everything that makes it feel like partying to forget instead of partying to celebrate. The best songs, like the radiant “I Need to Move On” and the anxious “Don’t Be So Hard On Yourself,” retain the smash-the-walls-down sonics of Brother, but as Best of Luck goes on, the cheery veneer starts to crack. Taken in full, it plays like a story about the cost of success written in neon highlighter, its title less a well-wishing than gallows humor.

Arriving a full 37 years after the previous installment in the series, Craig Leon’s latest chapter in the Anthology of Interplanetary Folk Music saga continues the central narrative of the LPs released in 1981 and ‘82 (and reissued in 2014 by RVNG), but also makes it feel deeper and murkier and stranger. Which is saying something: the title is a coy reference to Harry Smith’s Anthology of American Folk Music, and Leon is at a similar game, imagining the tribal music of an alien species known as the Nommo. The first two volumes were plenty odd, making use of then cutting-edge synth technology to compose songs that felt like they were drifting out of focus, batted along by murmuring rhythms and adhering to no particular melodic throughline. The Canon sticks to that general m.o. but the songs feel even wavier and more ghostlike. Elements cohere and dissipate, like the pink ribbons of synth that gradually pool in from the edges of “The Respondant in Dispute” or the mournful topline melody that floats above a still ocean of electronics on “Four Floods of the Point” before wafting off into the background. If there’s a reference point here, it’s Vangelis’s score for Blade Runner; the songs on The Canon wander between hopefulness and eeriness, but are never anything less than riveting.

This 2018 EP from Portland post-punk unknowns The Bedrooms rattles and reverberates like a three-week-old chest cough, with even the uptempo tracks conjuring up the kind of gloomy chill that seeps straight into the bones and never really dissipates. The Bedrooms’s downcast, often ominous sound is built on the post-punk-goth fundamentals (Joy Division, Au Pairs, Siouxsie, etc.) but there’s a damp rattiness to these recordings that, when coupled with the band’s coolly caustic delivery, could only have come from the Pacific Northwest.