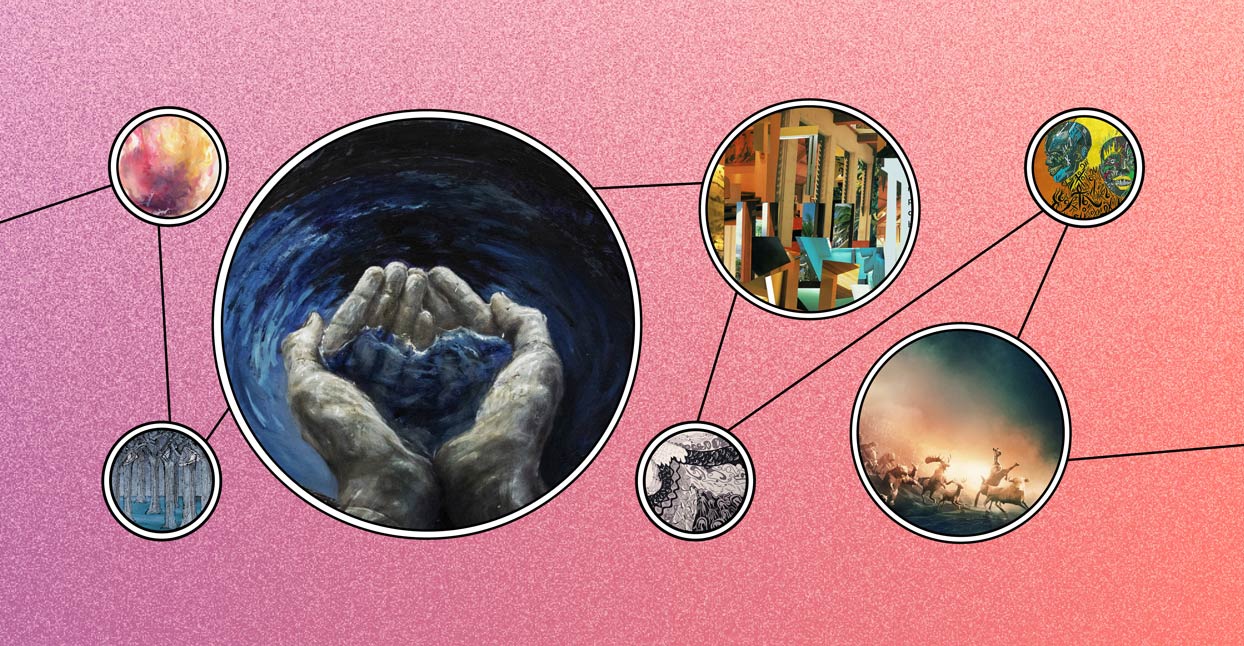 BIG|BRAVE
A Gaze Among Them

Like ISIS and Neurosis before them, the Montreal group BIG|BRAVE define “heavy” music in terms of weight, not speed. Their fourth album, A Gaze Among Them, stretches five songs out over 39 minutes, and each of them use their extended runtimes to figure out increasingly punishing ways to fill every available air pocket with sound. You don’t listen to A Gaze Among Them so much as get submerged in it: the twin guitars of Robin Wattie and Mathieu Ball flood the songs with pooling, lava-like riffs, and drummer Loel Campbell chooses his flourishes carefully. “This Deafening Verity” goes on for five full minutes before a bass drum finally kicks in, and when it does, the impact is shattering. Rattie and Ball seem more interested in texture than shape, keeping most of their baseline tones low, expansive, and guttural while filling the atmosphere above them with shrieks of feedback and glassy tremolo. Music this deliberately formless needs a centerpoint to cohere around, and the group has one in Wattie’s remarkably baleful voice. She commands every song, often stretching a single note out across multiple words and entire verses, an approach that amplifies the music’s hypnotic effect. In “Muted Shifting of Space,” she sounds like she’s dragging herself in great heaving motions from one end of the song to the other, a dead-eyed zombie condemned to walk a blackened earth. This is big, suffocating music, with a sense of nihilism that is almost palpable.

“Idle hands are the devil’s workshop.” So declared my Sunday school teacher back in 1997, after she caught me doodling on one of the many, many Greek Orthodox-related word searches assigned to pass the time further our theological upbringing. Taken literally, this supposed strand of scripture (which actually isn’t in the Bible — Google it) says pretty much all you need to know about the new album from Portland’s Idle Hands: 11 scorching, sweeping goth-rock songs stacked like castle arches; melancholy wails, metallic churn, and dark fantasy themes humming along the assembly line Baphomet built. From the gloom-ridden balladry of “Dragon, Why Do You Cry?” (Shoutout to Rhaegal, gone too soon) to the the fist-pumping, Mastodonian theatrics of “Blade And the Will,” every track bears the sign of moribund excellence. Excellent listening for your next Bible study group!

Model Home, the duo of NAPPYNAPPA and Pat Cain, are a team on the avant-garde edges of their respective scenes; NAPPYNAPPA is a whip-smart rapper from DC’s thriving young underground, while Cain is a video artist and experimental electronic producer. Their collaboration has yielded fertile results—this is their eighth release over the last year, and while one might not expect a group that releases so much to have tight quality control, their work has the exuberance and thoughtfulness of free jazz. One can hear the two bouncing off one another, coming together and wheeling apart, rapping winding around and through electronic gurgles and spasms.

On this latest release, the two add in another vector of forward-thinking DC music—Future Times label head Dolo Percussion (Max D, Beautiful Swimmers) on live drums and FX, brings in the cutting edge of the Capitol City’s dance scene. Across five heady and playful tracks (yes, “Intro” is actually the centerpiece), the trio make their own map, from the spiritual realm (“Orbital”) to earthly pleasures (“Push Thru,” which also features Boost and M Cherry) to outer space (“No Threshold”). 8 is full of the crackling excitement of artists working together to find a unique creative groove, as bright as the lightning during one of the daily afternoon thunderstorms of a DC summer.

On their debut album, Dutch producer-duo Polynation (Stijn Hosman and Hessel Stuut) attempt to translate the ancient, unchallenged laws of nature—evolution and extinction, birth and death, regeneration and decay—into lush, polished electronic music that leavens live percussion with nebulous synth leads à la Hot Chip or Yellow Magic Orchestra. Their mission might seem lofty on paper, but put into practice, it yields natural, approachable results, especially on the longer cuts; “Toba,” a particular standout, starts off serene but gets slowly weighed down by dread as the song drifts closer to the event horizon — a flood of primal anguish, masquerading as easy listening. Think of Igneous as the musical version of one of those dioramas at the national history museum that shows what the earth might have looked like before the meteor came to wipe everything out: the twilight leading up to the inevitable end (or at least a version of it), trapped and staged for all to hear.

For music fans of a certain age, a new release from Versus may seems like a dream of the 90s unexpectedly resurfacing— except that what’s happening on Ex Nihilo, the band’s first release in 9 years, isn’t informed by any indie rock nostalgia because who remembers Versus sounding this jangly? From the crisp snare hits that lead into expansive opener “Invisible Love” to the ponderous synth explorations of “Gravity,” Versus display the confidence of the seasoned band they are tempered with the curiosity of a younger outfit in search of new sonic worlds. Versus is also old and wise enough not to waste our time. Ex Nihilo takes the shape of an economical EP trimmed of extra frills; it’s the dream of the 90s, again—alas, if only it were available on 7-inch.

150 years ago today, at Promontory Point, Utah, a robber baron by the name of Leland Stanford put the smack-down on a golden spike to connect the Union Pacific and Central Pacific railroads, thus completing America’s first transcontinental railroad. “Now, Zoe,” you ask, “What could this Gilded-Age factoid possibly have in common with the eponymous debut album by Recluse Raccoon, released last October?” Well, reader, the answer is not a lot, except for the fact that it would probably sound great on a cross-country train tour.  The Richmond, Va. band steer through broad stretches of stylistic terrain — jazz, pop, psychedelia, folk, math rock, and more — at a slackened pace, keeping their jams fluid but focused on standouts like “Mother America” and “New Acid.” Strengthening and texturizing its sturdy construction further are the various, eccentric musical flourishes, ranging from fluttering flutes on (“See You As You”) to cinematic horns on “Put In The Time.” It’s not a golden railroad spike, but who cares, except maybe the metaphor police? Besides, hidden gems like this shine gleam even brighter.