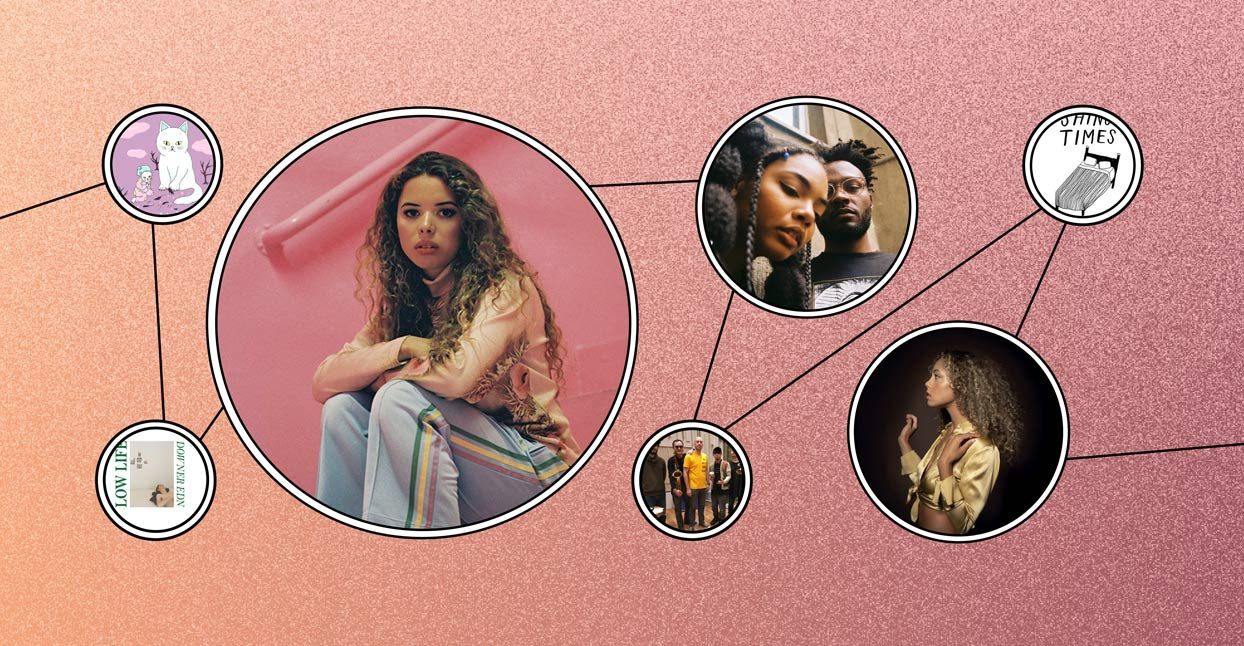 A few weeks ago, I was talking with someone on Bandcamp’s labels team about how much I loved the Jayda G record, and he offered a brilliant suggestion: have Dee Lite’s Lady Miss Kier interview Jayda. The plan made sense: Significant Changes plays like a mini-history of club music, albeit one that begins with Paradise Garage (where, coincidentally, Miss Kier DJed) and ends with Dee-Lite. Like most wild schemes, this one didn’t end up coming together, but that might be for the best, as Significant Changes is an album best taken on its own terms. Wild, freewheeling, and designed for maximum joy, Changes deftly utilizes the house and techno lexicon to create a club music language that feels both bracingly new and welcomely familiar. The endorphin rush kicks in early, with the back-to-back peaks of “Stanley’s Get Down” and “Leave Room 2 Breathe.” The former—with its repeated scold, “I see you with your phone, looking at Instagram”—radiates the cheeky fun of early ‘90s dance staples like “You Better Work”; the latter is a swooping, soulful number that cross-wires Alison Moyet with C+C Music Factory. But, as its title implies, Changes never stays in one place for too long; ambient outings like “Orca’s Reprise” make for a welcome mid-album comedown. That song features the sound of whale cries, a nod to Jayda G’s work as a scientist (she recently completed a master’s in environmental toxicology). That she was able to complete her coursework while touring the world and completing her solo album (you can read more about this in our upcoming feature) is another clue to the album’s m.o. After such an exhausting year, Jayda G has earned the right to party.

A lot of people are going to find by Lo Siento vocalist Pepa Chan’s screechy, sometimes snotty singing style obnoxious, but it adds a distinctiveness to her band’s pinwheeling and playful garage punk, which also features all Spanish lyrics. Though the four piece are still barreling through their sugary songs at a million miles an hour Peach Kelli Pop-style, Lo Siento have actually dialed down their energy for second release Brujas, ruminating on their hooks a while longer while keeping their songs at an economical 2 minute running time. Also, it’s worth mentioning that this band is somehow from St. John’s on Newfoundland island aka very far away on an island off the Atlantic coast of Canada, which is sort of the last place you’d expect a wacky Spanish-language indie pop band to call home. But that’s the world of Bandcamp.

I listened to Low Life’s Dogging a lot in 2014. I’d been laid off at the end of 2013 from a job I cared about very much, and I was exhaustedly cobbling together an insufficient living from two retail jobs and freelance writing. I’d come home from a 10-hour shift on my feet and spend another two or three hours writing in order to meet deadlines, feeling like I might pass out at any second. The Sydney punk band’s grim outlook, all boorish lads and everyday cruelty, riffs and vocals both dispatched with arch edges, matched mine; I was in my mid-30s, felt like I was going nowhere, felt like I’d survived an early life of brutal violence so that I could tread water barely living. My life’s done a 180 since then, but there’s still something that feels incredibly resonant to me about Low Life’s approach. They revisit the same well (as a five-piece, now, grown from a trio) on Downer Edn, even sharper and more focused, with an understandably bigger sound (see the chorused-out guitar squall of soccer hooligan anthem “RBB,” for example, or the controlled chaos of “Gabbertron,” or the punchy chords of “Warrior”). “92” is the song that sticks with me the most, with its refrain of “Small boys become bad men, battered boys become very bad men.” I’ve had had violence done to me at the hands of those men, seen cycles of abuse in real time, felt those cycles stretch down through generations. It is real. (Low Life and I do not share the same opinion of dance music, which I love; there are a couple of digs on this album at club escapism.) Unlike Dogging, though, Downer Edn has a core of implied hope—there are escapes that don’t lead to death, there are chances to break things open. This is a record spun from the worst, most banal aspects of humanity that manages, in its best moments, to transcend them.

Ronin Arkestra are a recently-formed collective led by revered player Mark de Clive Lowe, featuring some of Japan’s most-talented contemporary jazz musicians: The all-star roster includes members of Kyoto Jazz Sextet, WONK, Cro-Magnon, Root Soul, Sleepwalker, Sauce81, and Kyoto Jazz Massive. Their debut four-track offering, First Meeting, condenses the country’s sprawling scene down to an instrumentally-complex — but nonetheless listener-friendly-EP. The band land a discordant sucker-punch from the get-go with “Stranger Searching,” a soulful, spiritual jazz jam studded with woozy electronics, mournful horns, and hip-hop backbeats; and “Redeye Reprisal,” a frenetic track anchored by virtuoso drummer Hikaru Arata. Over on the B-side, “The Silk Road” prelude offers a guitar-driven, pastoral version of the preceding madness, all before de Clive Lowe leads the band in with a killer cover of John Coltrane’s “The Love Supreme.” This is, truly, Japanese jazz at its finest.

While Kim Weldin’s 2017 release as Shiny Times, Secret Memos, sounded like a collection of small, plaintive songs made and meant to be listened to in a bedroom, her new full-length Can’t Be Depressed is both more focused and more experimental. Weldin’s main gig is in dream pop duo Tape Waves, and her work as Shiny Times is very much in line with that band’s dreamy, feather-light indie pop, but there’s more shading to her songs here, and a little more playfulness. It’s when Weldin lets her songs melt into more meditative song structures, as on the looping “She’s So Heavy,” that Can’t Be Depressed is at it’s best.

Pop doesn’t get more post-apocalyptic — or perfect, for that matter — than on Miss Universe, the debut full-length from acclaimed London singer Nilüfer Yanya. A loosely-defined concept album, it guides the listener through a 24/7 self-care program called “WWAY Health,” which is basically Siri playing therapist: “We are here for you. We care for you. We worry about you so you don’t have to,” a disembodied, synthetic voice shortly after pressing play. The uncanny, ear-catching adventure that ensues traverses a wide range of styles, from sullen grunge (“In My Head”) and lush synthwave (“Paradise”) to the jazz-infused pop that fueled her rise as a critical darling (“Paradise,” “Melt”). Through it all, Yanya maintains a straight-shooting path, her arrangements minimal and well-balanced, her husky vocals situated front and center; this, in turn, ensures that the album’s protean nature never grows overwhelming. If you ask me, it’s a extraordinary machine. (Nevertheless, I’ll pass on those android heart-to-hearts.)

April + VISTA
You Are Here

You Are Here, April + VISTA’s 2018 album is filled with April George’s sage lyrics and VISTA’s (Matthew Thompson) futuristic beats. “What gives you peace when you rest your head,” sings George on “Hot Coffee Freestyle”. I’ve revisited You Are Here many times since its release and I am continually struck by the synergy between the duo. All lyrics are penned by George and Thompson brings them alive with his future-forward, experimental beats. You Are Here is only 19 minutes long but seems more expansive than its timestamp alludes to. George and Thompson take care to create strong narrative structures for each song on the project. Album opener “FOMO” sounds like an intergalactic lullaby with lyrics about overcoming self-doubt with George crooning, “Am I asking for too much?” “Fo’Sho” is a new age neo-soul tune with a message about who you can depend on: “It’s a shame that the ties we take time to make don’t take much to weaken, even less to break,” sings George. On album standout “Own2” George is clear about taking the reins to control her life and her future and Thompson backs her up with a seamless, soulful production. I’m excited to see where April + VISTA go next.