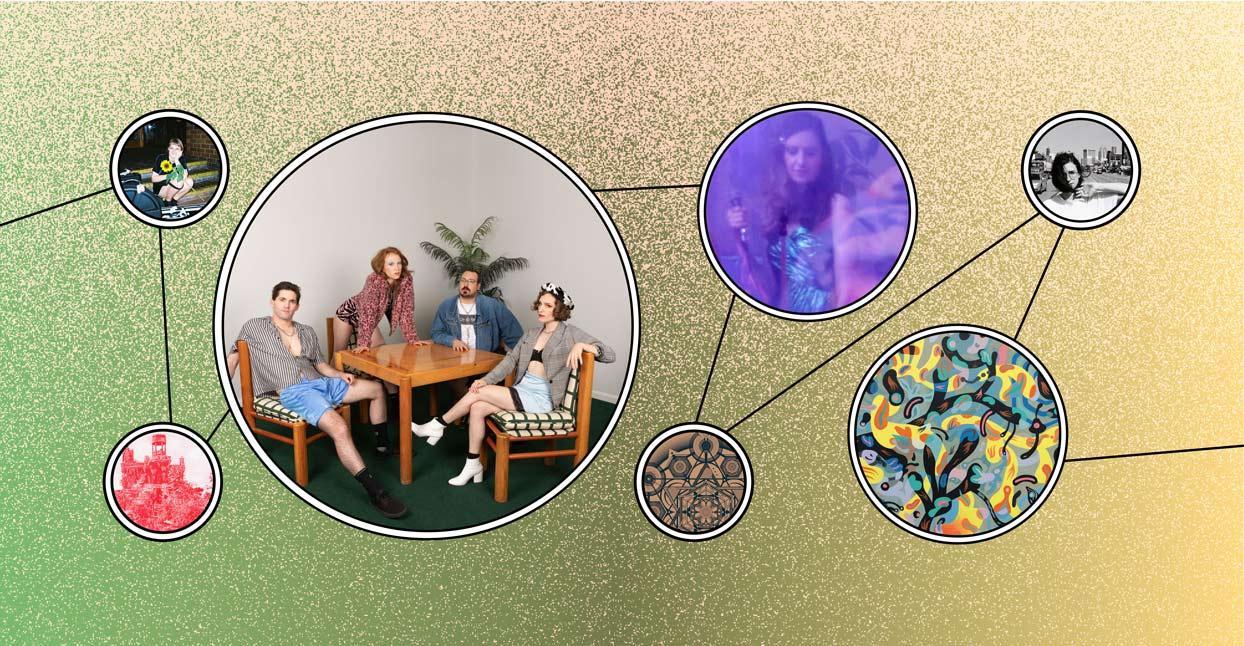 Anyone who has spent any amount of time attending DIY shows in Brooklyn has undoubtedly witnessed an opening set by synth surrealist, animator, and industry vet Alice Cohen. They’re always transfixing: a bespectacled Cohen, with the disarming appearance and affect of a beloved grade-school teacher, conjuring eerie waves of sound from her machine, then abruptly switching gears to launch into winsome soft rock. On her first record for the excellent experimental/avant-pop label NNA Tapes, Cohen hones her skills at the latter even further, delivering nine of her most winning and fully formed pop songs to date. Where Cohen’s past work made a virtue of its rickety, homemade feel, Artificial Fairytales is sleeker and more focused—traits all the more surprising, considering this record actually was recorded at Cohen’s home. It also makes savvier use of Cohen’s voice than any of her previous work: she cruises confidently through the center of the synth-funk number “Plastic Paradise,” lighting up the chorus with taut three-part harmonies; the rippling “Hourglass” is structured to be a Cohen/Cohen duet, her voice layered so she’s always singing two different parts at once, making the song feel rich and full. The synth work throughout is straight ‘80s lite rock, but Cohen makes it all work, and work well. “Hidden Staircase” is tender and aching, and the sincerity in Cohen’s voice is the perfect counterpoint to the plasticine castle of synths she’s built around it. Cohen has been making music since the late ‘70s; Artificial Fairytale presents a strong case for why she should keep on making it for the next 40 years.

Stef Chura records sound like fingerpaintings look, all bright smears and goopy slashes with no care for coloring within the lines. On her latest LP, Midnight, the Detroit guitarist unearths a newfound sense of emotional freedom by tightening up her gloriously messy sound. Although Chura is a remarkably creative guitarist, her talents as a vocalist are what shine most brightly on Midnight. On the chorus of “Scream,” she sings, “If only you could hear me scream!” three times in a row, changing the inflection of the final word so it sounds like “scram” or “scree-yum,” playfully expounding upon the possibilities of language while her fingers explore the boundaries of the electric guitar. On “Sweet Sweet Midnight,” Chura duets with producer Will Toledo on a song about a departed friend, her yodel softening to nearly a murmur as she reaches the bridge. “I wanna see you breathing,” she sings, and then the key change breaks your heart.

French Vanilla
How Am I Not Myself?

L.A.’s premier art punks French Vanilla have never been shy about letting their freak flag fly but on sophomore release How Am I Not Myself? they turn that freakiness (and the funkiness) up to 11 for a record that actually does sound like it came from Planet Claire. This slinky LP oozes confidence and sex and sax appeal, with some of the finest grooves of 2019 so far and a truly powerhouse performance from vocalist Sally Spitz. French Vanilla is the real deal and How Am I Not Myself? is huge achievement for a band that deserves all the accolades coming their way.

The six songs on Carla Geneve’s debut EP run the gamut from love and identity and set the tone for Geneve’s introduction to the world. The Australian singer has said of single, “Yesterday’s Clothes,” that the song was written to “come to terms with my thoughts and situation,” and that ethos of self-reflection is seen across the album. The songs on Carla Geneve often turn inward and the overarching theme is introspection. Opener, “Empty Stomach,” has sweeping guitar riffs and lyrics about love that land like a gut punch. Elsewhere on the album, “Yesterday Clothes,” is a vulnerable song about love and guilt that is expertly paired with classic indie rock drums, guitar melody, and Geneve’s confident voice. Album closer, “I Hate You (For Making Me Not Want To Leave The City),” is a melancholy ballad where Geneve’s voice and guitar take center stage. Carla Geneve is clear and poised and a strong introduction to a new artist.

On his 2017 album El Gran Poder, Lagartijeando emerged as the “wild card” of the electronic folklore scene. His music contained many of the genre’s familiar touchstones—melody lines played on flute and nylon-string guitar that pointed clearly back to traditional Andes folk, murmuring tempos, tasteful electronic elements; but then there were the strange, psychedelic additions: an arrhythmic pulse that made the song feel wobbly, distant warbled voices buried in the mix. All of that, thankfully, persists on his new record, Jallalla which feels even moodier and stranger than its predecessor. The instrumentation on “La Frontera,” which features a fluttering vocal by Minük, starts and stops unpredictably, and Lagartijeando has layered the background with ghostly vocal snatches that appear for mere seconds above the rough strum of acoustic guitar. The five-minute “Chakana Cosmica” is Andes folk gone dubstep, a repeating doomy wash of synths flooding the song with darkness. “A Todo Pai,” boasting a strangely Damon Albarn-like vocal melody from Javier Arce, feels tense and bristling, and the far-off bird-like squawking that appears a minute and a half in adds to its surreal mood. Jallalla is a reaffirmation of Lagartijeando’s peculiar and fascinating vision, and the ways he warps and disrupts familiar sounds makes his music feel wavy and wonderfully mirage-like.

The British producer-dj Ochre (né Christopher Scott Leary) is what some folks (more specifically me) might call an IDM optimist. His work contains little in the way of bleak glitchscapes or harsh noise assaults, instead conjuring the enduring miracles of day-to-day life on our dying planet; a given song might feature thin, soft drum loops that flutter like a baby’s heartbeat; or deep, water-logged synths which ascend gracefully from the low-end of the mix like a surfacing whale. To listen to Leary’s 2004 effort A Midsummer Nice Dream, newly reissued by Lapsus Records for its 15th anniversary, is to snuggle up for a long nap in utopia. Soothers like “REM Sleep Research” and “Summer Lusk” are like ear candy for the pineal gland, contrasted by the slightly-uptempo, nocturnal swarm of “Seesoar,” which glimmers like golden-era Autechre. With the world as it is, I’ll take any glimmer of hope I can get.

Argentinian electronic duo Balvanera make infectious, clubby darkwave that neatly melds elements of minimal techno (those clipped beats), synth-pop (those handclaps) and EBM (that buzzing bassline) with swooping goth synth pads and singer Agustina Vizcarra’s vocal incantations. On harder, more industrial tracks like “Decode” and “Ruthlessly” she opts for an almost spoken-word approach; on dreamier ones like “Narratives” and “Citadel” she’s more fluid, more sing-song. Delusion/Desire is the pair’s debut full-length, released in 2018, and the balance and variety of the album, along with its insistent beats and elegantly placed, hooky synth melodies, make it a perfect witches’ brew. I’ve written a lot about the draw of the goth club floor, its aesthetic, and tunes that are perfect for it—melodramatic low lighting, sometimes too much dry ice—but finding Delusion/Desire (as I worked on another story) and falling for its instant appeal has me wishing pleather catsuits were appropriate for summer.