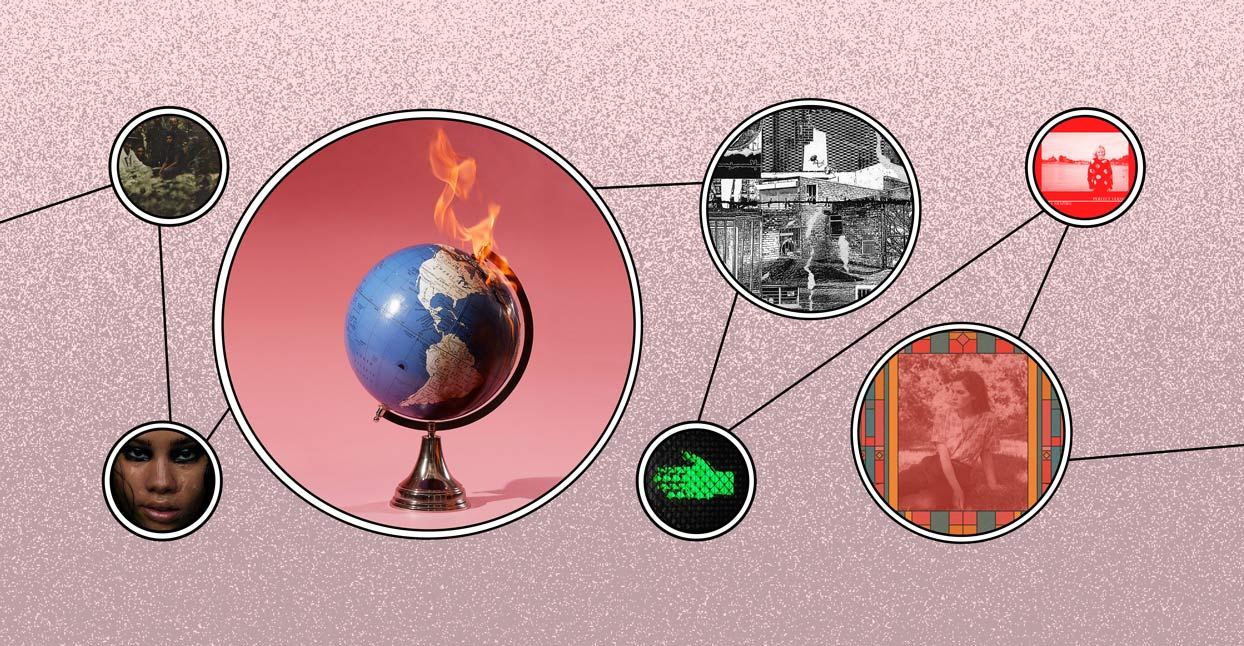 British punks Bad Breeding have their thumbs on the desperate, ragged pulse of a decaying empire. Exiled is their third LP, a blistering mix of hardcore snd noise rock firmly rooted in ‘80s anarcho-punk tradition while still feeling entirely contemporary. (Anti-Farage music necessarily sounds a little different than anti-Thatcher music, no?) The thundering, squalling “Theatre of Work,” the album’s longest track and its centerpiece, probably best illustrates the group’s ability to fuse several different subgenre styles into something that feels unique, dangerous, powerful, and alive; its rhythm is, in places, nearly that of breathing before it sweeps up into a brief circle-pit dust storm and back down. Guitars howl, and vocals feel like an invocation. By the time the whole thing dissolves into pure warping noise, one feels less enervated than exhausted. Though, as mentioned, the subject matter on this album will be familiar to anyone who has a passing familiarity with anti-capitalist, anti-fascist literature and left-wing hardcore in general, it’s far from vague sloganeering, choosing instead to focus on everyday, localized struggle. One has only to read the band’s essays to understand how thoughtful and invested they are. An essential record for those of us fighting the good fight(s).

Islands is the second album from country and folk singer Emily Durant. The New Orleans-bred singer-songwriter makes her home in Brooklyn and is known for taking her piano to gigs around New York City. Produced by TV On the Radio’s Kyp Malone, Islands is about love, longing, and heartbreak. Durant begins the album with “Rising Sun,” a melancholy folk tune where she repeats, “I just want you to hold me until my time is up.” On the seven-minute “Good Ol Night,” Durant’s pristine voice gleams over the piano and horns that make up the country melody. On “Islands,” the title song, Durant sings about escape and the end of a relationship. Throughout the album, Durant’s voice shines—it’s pure and unwavering. Islands is a good introduction to Durant’s solid sound.

Full of rage but equally full of joy, Mannequin Pussy’s Patience is a knockout, drag down, girls-invented-punk rock record that detonates upon impact and leaves a cloud of stardust lingering in its wake. The band takes up space in a real way here, whipping up frenetic sonic clouds to soundtrack frontperson Marisa Dabice’s bloody snarls and howls which sound both wilder and more laser-focused than ever. Yet while she might be angry (and what woman isn’t right now), any cruelty in her fury is tempered by how much fun the band is having playing these righteous, hook-filled songs. Patience will give you a hard time, but it’s a good time, too.

The Raconteurs
Help Us Stranger

The Raconteurs—Brendan Benson, Patrick Keeler, Jack Lawrence, and Jack White—make their long-awaited return this week with Help Us Stranger, their third album and first studio effort in more than a decade. A bricolage of meat-and-potatoes rock, alternative country, and jam-band interludes, it stays true to the band’s old, chart-topping motto of “Steady As She Goes:” a particular point of relief, no doubt, to those White fans who found last year’s off-kilter, Boarding House Reach LP too jarring and didactic. Rather, standouts like “Bored and Razed” and “What’s Yours Is Mine” place a heavy emphasis on the dynamic interplay between these four men; White’s frantic yawps scrape against Benson’s sinewy refrains like thorns on petals, their frisson buttressed on the back-end by Keeler and Lawrence. A similar singularity sustains “Only Child”—the album’s requisite yeehaw ballad—and the title track, which leavens choppy acoustic guitars with crisp percussion redolent of ’90s Britpop. Don’t call it a comeback. These guys never left.

Julia Shapiro attempts to raise her vibration on soul searching solo debut, Perfect Version, a quieter and more concentrated distillation of the ragged emotional terrain she traverses with her main gig, Chastity Belt. The band’s 2017 release I Used to Spend So Much Time Alone is basically a personality crisis plastered with a yellow smiley face, but Shapiro lets all the cracks show on Perfect Version, a record about depression that never feels self-pitying because Shapiro doesn’t pity herself. She’s melancholy but inquisitive, and the songs here feel like worry stones, a pocket full of problems that have been turned over and over until they’ve been worn smooth from the effort but are no less heavy for it. Shapiro sounds on the verge of tears throughout opening track “Natural,” a song about both envying and doubting people who display the confidence she herself lacks. “It’s not natural,” she insists, perhaps to convince us, but definitely to convince herself. On the washed out and feverish “Shape,” the echo-y tracked vocals and layered guitars sonically mimic her emotional disassociation as Shapiro sadly admits, “I can’t fit into that shape/I can’t/ For what it’s worth/I’m not here.” There aren’t any resolutions on this record, no sudden bursts of insight to conclude Shapiro’s book of sorrows with a happy ending, but it’s her refusal to indulge in such phony platitudes when exploring her inner life that makes Shapiro such an interesting songwriter and Perfect Version another fearless entry in her ouvre.

The latest archival deep-dive from the ever-reliable Analog Africa label showcases the music of the Brazilian city Belém, which is located close enough to Colombia, Surinam, Guyana, Cuba, and the D.R. that it could pick up radio broadcasts from those regions. Location is central to the backstory on Jambú—those curious would do well do spend some time with the richly detailed album notes—but what matters is that, by the 1960s, the music of Belém had become a hybrid of a host of styles from the surrounding regions. All of that comes through across the compilation’s 19 joyous songs, which fuse the swinging rhythms of ‘60s calypso with the jittery horn charts of salsa and lightly fluttering flutes of the local traditional music. And while there’s no shortage of riches in the Analog Africa discography, Jambú may be its most revelatory collection in years: “Os Quentes de Terra Alta” by Praia Do Algodoal sounds like a carnival street band trying to cram its way into a recording booth, woodwinds skipping rudely across drunken brass while a lone bass drum bangs away hypnotically; “Lambada Da Baleia” by Vieira e Seu Conjunto speeds by so quickly the vocalist can barely keep up with the band, guitar notes appearing in split-second bursts. Everything operates at a breathless pace, non-stop party music with a sound that spans continents.

On Shygirl’s 2018 EP Cruel Practice, slashing industrial sonics go head-to-head with affectless, vaguely menacing vocals; it’s club music for a club where the threat of violence hangs ever-present in the air. Shygirl—born Blane Muise—is a nimble, cunning vocalist; on “O,” she bounces her voice against a stuttering bass beat, matching its chaotic cadence pound for deafening pound. She maintains that quick-syllable approach on “Nasty,” peppering Sega Bodega’s nails-on-a-digital-chalkboard production with breathless, blink-and-you’ll-miss-it wordplay. Throughout Cruel Practice, Sega employs a musical backdrop that could be best be described as “industrial horror film”: all of the synths are razor-edged and threatening, from the broad string-like swipes that open “Rude” to the queasy Halloween-ish ambience that burbles beneath “Asher Wolfe.” And in the center of the digital bloodbath stands Shygirl—calm, poised, unfazed. “I’ve got you right where I want you,” she murmurs in the EP’s final song. It is the sound of a hunter toying with her prey.