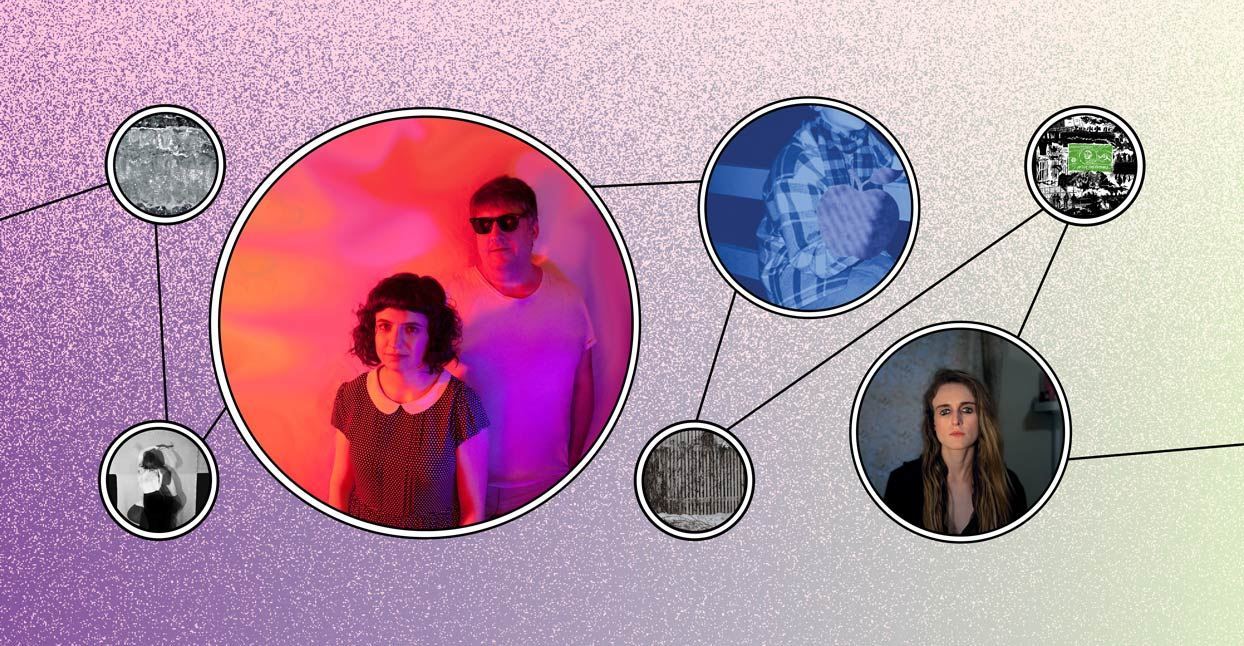 On “Blood Into Wine,” the first track on California Black Vows, Clay Rendering sound like a band reborn. On their 2013 album Snowthorn, as well as the intervening singles, they seemed to trace their ancestry to drone and gothy EBM, but by the time “Wine”’s widescreen chorus kicks in, it’s clear they’ve got their sights set on bigger rooms. They’ve got the songs to support the ambition: Black Vows is a cutting, focused record, one where the fog that surrounded the group’s songs in the past lifts, revealing the sharp outlines of church spires and peaked roofs of mausoleums. “Another Roll of the Iron Dice” is all momentum, Lords of the New Church riffing thrashing up against Mike Connelly’s deep, bitter voice. On “Once in the Well,” a thick layer of keys and croaking guitars is offset by a ghostly lead vocal from Connelly’s wife and bandmate Tara. Their two voices meet on “Don’t Understand You,” Tara responding to Mike’s furious shouts with eerie serenity. Black Vows takes ample cues from music on the darker end of the color spectrum—a little doom metal in “Closed Circle,” a little darkwave on “Cities of the World”—but unlike the free-roaming bad-mood music on their previous work, here they put them in service of songs with concrete shape and structures. It’s music that is both chilling and imposing.

Claire Cronin is a Los Angeles-raised, Athens, GA-based poet and singer with a knack for dark alchemy. Her new album, Big Dread Moon, puts those sensibilities to good use. Situating her tightly-controlled, undulating yodels within spacious, bare-bones folk arrangements, the artist imbues every composition with a quiet discomfort, deepened by the queasy, orchestral passages that encroach on nearly every song, a dismal tide always lapping at the margins. Putting her bicoastal influences to good use, “Tourniquet” and “Saint’s Lake” trace a hidden path from the Deep South and the Old West, punctuating her southern gothic imagery—haunted houses, genteel facades, supernatural presences—with forlorn strums of the acoustic guitar. For fans of: Flannery O’ Connor, Sharon Van Etten, and werewolves.

On his 2018 album Cold Air Kyle Bates, who records as Drowse, used a greyish slurry of shoegaze, slowcore, and post-rock as a backdrop for a queasy exploration of mental illness, depression, and substance abuse. The effect was chilling: the uneasiness of the music, the way the tones warped and bled into one another, seemed to mirror the dread and disorientation in the lyrics. The combination felt so specific to the album’s subject matter, it was hard to imagine it working in any other context, but on follow-up Light Mirror, Bates’s band-playing-underwater sonics remain fascinatingly shapeless. It probably doesn’t hurt that the album was recorded while Bates was living in isolation in Northern Iceland; music like this is so relentlessly internal that collaboration would only dilute the qualities that make it so absorbing. On songs like “Shower Pt. 2,” Bates drowns his guitar in so much reverb you can’t even hear the pick hitting the strings—it’s all just a wavy band of sound with no beginning and no end. On “Arrow,” Bates bangs away on an ancient piano as rivers of guitar pool up in the center. That song also employs one of his signature tricks: having the instruments go briefly, jarringly out of tune, upsetting the equilibrium of the song and underscoring the sense of clammy dread. Bates’s voice remains far, far in the background throughout, a distant ghost murmuring sad secrets from the beyond. You can’t make out what it is that he’s saying, but the cold sorrow in his tone speaks volumes.

Jeanines’ self-titled debut takes the classic bright and blary indie pop formula and doesn’t do much to it, matching its super sweet, blink-and-they’re-over pop opuses with bittersweet sentiments and dousing it all in lots of jangle and reverb. This isn’t a bad thing. Garage rock, dream pop, the Beatles— all the references are here, and you already love this.

Kaleidoscope
After the Futures…

NYC punks Kaleidoscope are perfectly named—their version of hardcore breaks common genre tropes and approaches into odd, disorienting, and fascinating new patterns. Just a cursory listen through After the Futures…, their latest delightfully monstrous LP, reveals a number of jarring spots amid the whirlwind momentum—the disquieting rhythms of “Exhaustion,” the stuttering drums and motor-acceleration guitars of the title track, the vomiting that opens “Feedback Systems,” the echoing vocal dropoff in “Feeling Machine,” the cloud of noise that is “Suicide.” (Their guitarist and frontperson is Shiva Addanki, also a visual artist who’s designed a fair number of album sleeves from the last decade you might recognize, if you pay attention to the contemporary scene; the idea of aesthetic and design as inextricable from political approach winds through his lyrics and the band’s own presentation.) After the Futures… is aimed straight at the current state of politics both national and global, drawing the web of digital data-mining, surveillance, border enforcement, policing, and paranoia that impacts our everyday lives in indelible ways into tight relief. In an absurdist world, there’s no better way to take a picture than to smash the lens.

Zoe Reddy’s MACHINE is raw and visceral. The Hague-based artist has taken great care to create an immersive electronic project that flows seamlessly from start to finish. MACHINE draws from electronic and experimental R&B and merges them into a singular, distinctive sound. The song titles of the album’s songs are alliterative and that seems like a purposeful choice. “SPLIT,” “SPINN,” and “SATELLITE,” and their hard consonants mirror the sound of the project: hard, reactive, and unyielding. Opener “SPLIT” traverses multiple sounds starting with Reddy’s haunting vocals and ending with eerie strings. “SATELLITE” ends the album with an avant-garde electro sound. Reddy regularly uses everyday sounds as the catalyst for her beats—washer machines, blenders, and other household items—taking the mundane and quotidien and revving them up to create an unforgettable sound.

Vancouver’s Nice Apple turn peppy indie pop into tidy post-punk on a droll, catchy, and curiously titled release that’s over in a flash but retains enough replay value to make a cassette purchase very worth it, if you’re still into cassettes. As far as I can tell, to “auto​-​cathect” means more or less to hype yourself up, but Googling the phrase PTSD’ed me back to grad school which is the opposite of the vibe given off by this laid-back project, which features members of Dumb, Maneater, and Cruel Sport doing their best to put their main gigs to shame with a sense of musical playfulness that suits their dry humor perfectly.