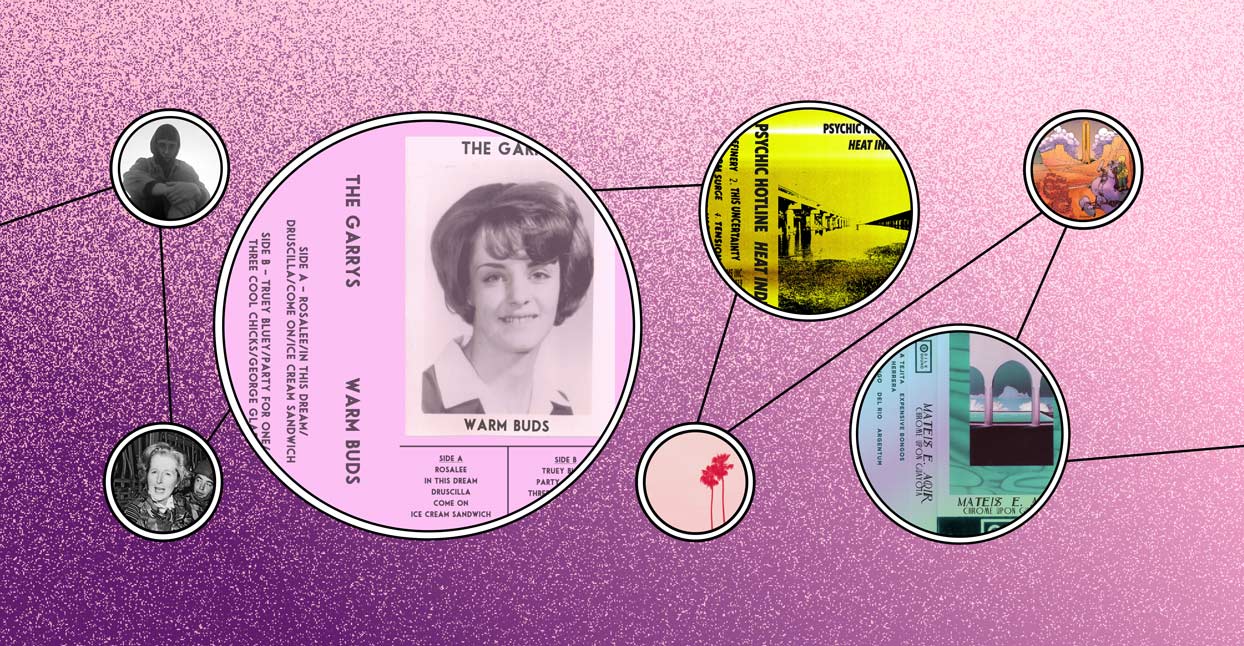 Mike Cooper has worn plenty of respectable hats over the course of his storied 60-plus-year career: R&B sideman, folk troubadour, country bluesman, free-jazz improviser, film scorer, even music historian. But if you ask me, his Hawaiian-shirt period, showcased on 2004’s album Rayon Hula, newly reissued by Room40, don’t get nearly enough credit. Inspired by his repeated travels to the Pacific in the mid-to-late ’90s, and disturbed by climate change, the British guitarist crafted the LP as a 21st-century update to — and in many ways, a repudiation of — exotica as an institution. Cooper guts all the usual tropical signifiers, like ukuleles, ocean sounds, and surf guitars, replacing them instead with minimalist loops, luscious lap steel, and little else: artificial eden left untouched, paradise weighed down by paradox. The Tiki Room at Walt Disney World this certainly ain’t.

The Tokyo quintet De Lorians bill their prog-jazz fusion as a musical extension of “pataphysics,” an obscure, surrealistic branch of philosophy devoted to the “science of imaginary solutions,” which is basically the band’s highly-technical way of telling us that their eponymous debut LP contains half an hour’s worth of some seriously-kooky shit. Led by tenor saxophonist and synth player Takefumi Ishida—a star-gazing Zappa fan who fell in love with experimental jazz after coming across Pharaoh Sanders’ Karma LP in a bookstore—this tenacious collective thread spiritual jazz, Canterbury-style rock, ambient electronic, kraut, psychedelia, and vintage funk into a cosmic tapestry that’s engrossing, energizing, and thanks to the masterful production and digestible run-times, accessible. My particular favorite is “A Ship Of Mental Health,” which punctuates Hyozo Shiratori’s bouncy keyboards with hand shakers, hearty laughter, and a sax solo so ebullient and soaring, you’d think Ishida had won the lottery on his way to the studio. Or maybe we’re the lucky ones.

Florist, the “friendship project” that consists of lead vocalist Emily Sprague, Rick Spataro, Jonnie Baker, Felix Walworth is back with a new project. Emily Alone is a steady, mediative, and delicately devastating folk album. The umbrella theme of the album is loneliness and the band does a good job of creating a listening experience that is simultaneously delightful to listen to yet keenly somber. On the melancholy opener, “As Alone,” Sprague repeats, “As you feel in the dark,” to a wistful melody. On the sorrowful “Ocean Arms,” Sprague sings, “You are not your final form.” Sprague sadly declares, “My mind is still my mind,” on album closer, “Today I’ll Have You Around”. The lyrics throughout the album are pared down and poetic. Florist has given listeners a painfully self-reflective folk album that is worth a listen or a dozen.

Mateis e. Aqir is a Barcelona-based producer whose latest LP, Chrome Upon Guyota, was inspired by a trip to the Canary Islands. It’s always dangerous to make sweeping generalizations about places you’ve never been, so I’m going to try to avoid that here and stop after I say that there is, indeed, something very “beachlike” about the album. (I feel relatively safe saying that, as I know that the Canary Islands does, indeed, have beaches.) The songs—the majority of them gentle 5-to-6-minute electronic compositions—feel sunny and breezy: everything is major key, the synth tones feel pastel colored, and the rhythms are present enough to move the songs forward, but not pounding or obtrusive. On “Herrera,” glassy electronics ripple across what sound like electronic replications of congas and steel drums; “Del Rio” is more humid, dense blotches of electronics clustering like warm air, filling up all the space around the song’s simple, hypnotizing beat. Album-closer “Argentum” is the brightest of all, with a high, trebly guitar (or synths that sound an awful lot like one) beaming high and strong above a blissfully chugging beat. Summer is entering its “brutally hot” phase; Chrome Upon Guyota is the cool breeze we all need.

The solo project of Ruth Mascelli, who handles the electronics and rhythms for New Orleans punks Special Interest, Psychic Hotline has been active for the last handful of years, and this latest release, Heat Index, further evolves the project’s pulsing electro sound. While previous releases have felt harsher and more industrial-leaning, darker-edged, Heat Index opens with the sensuous, acid-inflected banger “Refinery,” blooming into the dreamy minimalist synth-pop of “This Uncertainty” and “Storm Surge.” “Tension” brings us back to Wax Trax’s early days, and “Variety” perfectly balances summer-thick swooning with dreamy exhaustion, vocals chopped and layered and manipulated. In the tradition of the best queer dance music, Mascelli ably balances a variety of synth textures with spare beats, sweeping melodies with discordant turns, the personal with the political. (As above, so below? As top, so bottom?) Haunting and appealing, just abstract enough to tease, this is perfect night-driving music for the 3AM club close. Windows down, makeup smeared, hair matted, turn it up until you can feel it in your throat.

The first EP New York musician Jed Smith released under the name Mick Trouble came with a built-in fictional backstory: that Trouble was a UK pub rocker in the late ‘70s, palled around with people like Jowe Head and had a brief brush with Stiff Records fame. The EP, the story claimed, were “lost” tracks from the ‘70s just now seeing the light of day. The four songs were spot-on recreations of the UK pub rock sound, and Smith gamely sang in a British accent and filled his lyrics with UK slang to help sell the whole thing. Anyone concerned that the gimmick only had enough life for four songs, take heart—It’s the Mick Trouble LP delivers on the promise of those first songs. The humor has wisely been toned down some—the songs still have titles like “Not ‘Alf Bad” and “Hung Up on a Dram,” but they don’t work as hard to sell the song as they did on the EP. Instead, what sells the songs are the songs themselves: “He’s Frank” (no relation to the Monochrome Set song of the same name—as far as I know) is jaunty and hooky, loose guitars ping-ponging across rattling drums; “Weekends At the Wag,” with its bouncing bass, feels like it could have been written on the edge of the era when rock bands were cautiously eyeing disco. Smith has turned a clever prank into a bona fide throwback rock album, and the results are a joy to listen to.

The Garrys are a surf-pop band made up of three sisters from Saskatoon who conjure up a overcast mood on their 2016 full-length Warm Buds. Though surf is a notoriously technical genre (so some men have told me, anyway) on this record the Garrys sound like they’re still figuring out how to play together, in the best way. Their music has an appealing garage band ricketiness that suits the simplicity of their songs. All of the women in the band sing, and their warbly harmonies combined with the liberal use of hazy reverb lend their music an indelibly spooky quality, even when their lyrics consist of the words “ice cream sandwich” repeated over and over again.