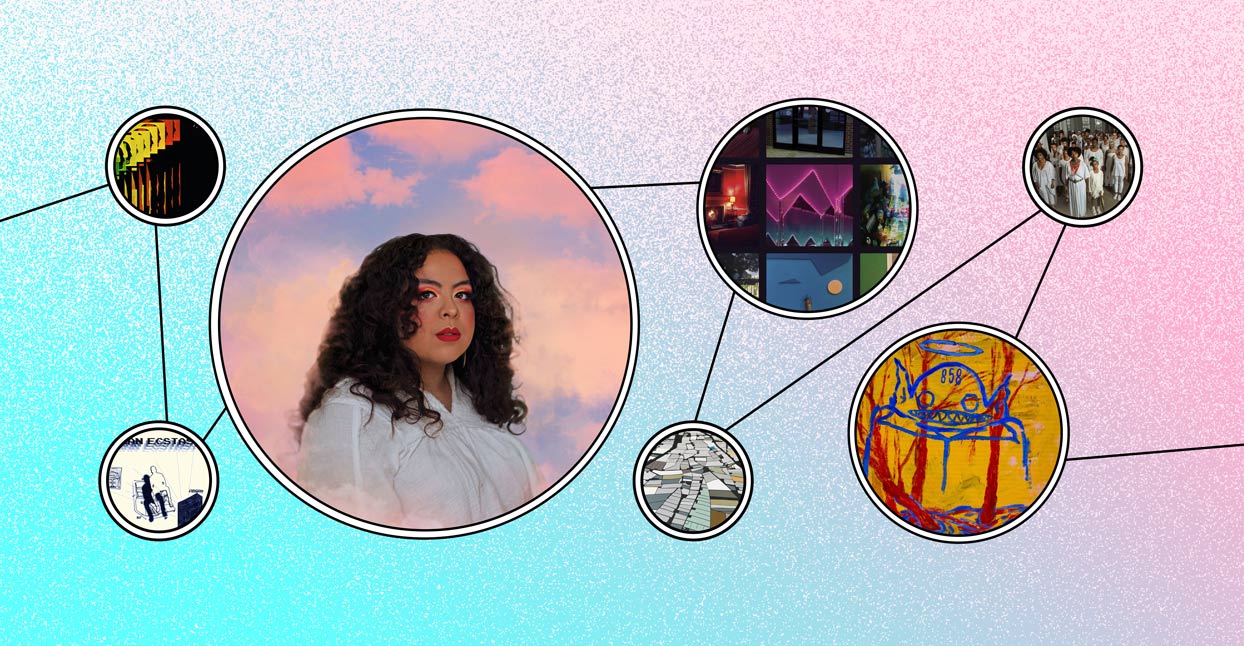 To say that sinus woes suck would be a serious understatement: Your senses grow dull, your eyes throb with pain, and your whole noggin begins to feel like a fruit-gusher candy getting slowly crushed between two steel plates at any given moment. At least there’s a silver lining to all that snot; not only does the sickness eventually end — at least for a time — it might just inspire you to make a kickass album. Los Angeles grunge-gaze band Goon have done just that with their debut record, Heaven Is Humming, which mastermind Kenny Becker wrote while battling a chronic sinus condition. Rather than snuffle and lament, the musician sought inspiration from the good days. “I find encouragement in the fact that I’m able to be productive in the times that I’m not sick,” he said in a press release. “People like to romanticize the periods in which, for example, someone like Van Gogh was suffering, but it was actually because he was sick that he would go outside, and see a cherry-blossom tree, and be struck by its beauty.”

Heaven Is Humming, then, is the rare example of a grunge album that isn’t mired in the artist’s despair, but rather his perseverance in the face of the fever dream. The noise-rock malaise hanging poison cloud-like over the record’s two heaviest cuts, “Datura” and “Deny,” along with Becker’s tension-laden yelps throughout, proves that journey as anything but easy, but chill vibes win out in the end. Tracks like “CCLL” and “Northern Saturn” run a little harsh, a little hazy, and a little high: just the way I like my rock.

Renowned for their confessional lyrics, crackling DIY production, and furious, sub-10-minute sets, Jeromes Dream rank among the most storied, essential bands in all of screamo-dom. Together with the likes of Orchid, Pg. 99, City of Caterpillar, Circle Takes the Square, and the rest of the East Coast old guard, the Connecticut hardcore outfit laid the groundwork for the scene’s come-up in the mid-to-late ’90s, before parting ways in 2001. Eighteen years later, they’re back with a great new self-titled LP produced by Jack Shirley (Nirvana, Deafheaven, Fury), and to old heads’ delight, it’s mostly chaotic business as usual. As portended by advance singles “Cataracts So Far” and “Drone Before Power Violence,” it finds the band adding several modern nuances into their barbed-wire-bound, spoken-word-powered mayhem, perhaps in a nod to all the bands they’ve inspired. Some tracks feature post-rock instrumentation à la Touché Amoré, while others traffic in the leaden, wafting shoegaze championed by groups such as Cloakroom. It’s always nice to see the creative cycle coming full circle in such a satisfying, surly fashion; masters will always be masters, but there’s always room to evolve.

Kaina
Next to the Sun

KAINA’s Next to the Sun is a delightful mix of soul, Latin, and bedroom-pop influences. The Chicago raised singer keenly balances sweetness and despair throughout the album—a decidedly different approach from her earlier, more optimistic release, Sweet ASL . “There’s a ghost in my heart,” she sings on the alt-R&B, “Ghost”. On the soulful, in-your-face, “Next to the Sun,” Kaina asks, ‘Tell me what you think about me,” over a seductive beat. On the salsa influenced album closer, “Green,” KAINA ends the EP with a song about finding one’s way. Next to the Sun captures KAINA at a vital moment as a person and artist and gives listeners a thoughtful snapshot of her growth.

Haley Morris’s voice is a force of nature. The singer of long-running Cleveland post-punk outfit Pleasure Leftists has always had a strong, controlled alto, but the range and vibrance of her instrument—she’s gotten comparisons to Siouxsie, Savages’ Jehnny Beth, and “crying Dracula” in the past—is especially luminous on The Gate. Much less gloomy than their previous (excellent) work, The Gate still has the propulsive, danceable rhythms and winding, chorused-out minor key guitars of death rock, but there are moments here where the whole thing cracks open and joy—joy!!—leaks in. See “The Conversation,” when the sublime pop chorus kicks in at roughly 0:45; both Morris’s voice and Kevin Jaworski’s guitar lift several steps; as Morris sings “The conversation is over now,” bassist Steve Peffer and drummer Mark TerVeen hustle to a peak that feels like relief and release. (Feels like the best, and rarest, kind of closure.) Even the gothiest songs, like the spiky “Dancing in the Dark” and the tense, moody “Try the Door,” have soaring bridges or choruses.

They’re an incredible band to watch live, with truly infectious energy—full disclosure, an old band of mine opened for them many years back—and The Gate is the first record of theirs where that feels genuinely captured. Inventive and bright, with songwriting that constantly twists and turns and powerhouse players who all know their strengths, Pleasure Leftists stand heads above the pack. The Gate is a door to possibility.

If there was any concern that David Berman had lost any of his stunning acuity with language in the 11 years since the last Silver Jews record, the record is set straight right out of the gate: “You see the life I live is sickening/ I spent a decade playing chicken with oblivion/ Day to day, I’m neck-and-neck with giving in/ I’m the same old wreck I’ve ever been.” The musical milieu may be different this time out—lush indie rock that feints frequently toward Americana—but Berman’s knack for weaving evocative narratives shot through with hope, doubt, and self-destruction are as strong as they’ve ever been. The album feels like a gift: when Berman blew up Silver Jews in 2008, he disappeared entirely; the long silence that followed made it seem like things might stay that way. Purple Mountains rewards the patience of his ardent followers with some of his strongest melodic songwriting to date, and also has enough clean hooks and clever barbs to reel in a few new ones. Centerpiece “Margaritas at the Mall” likens the futility of human existence in the face of a silent God with day-drinking at a shopping center: “See the plod of the flawed individual, looking for a nod from God/ Trodding the sod of the visible, with no new word from God/ We’re just drinking margaritas at the mall/ That’s what this stuff adds up to after all.” The melody in the chorus sounds triumphant; the lyrics are anything but. The album is dusted with traces of pedal steel, barroom piano, and string-like keys, but—as it should be—the centerpiece is always Berman. “If no one’s fond of fucking me/ then maybe no one’s fucking fond of me/ Maybe I’m the only one for me,” he sings wryly in the album’s closing number. Berman may feel alone, but his legion of disciples cheer his return—and hang on every word.

Tubman, the bracing new record from Chicago musician Avery R. Young, situates itself at the crossroads of rock, gospel, blues and vintage soul—searing, joyous songs cut through with searing guitars and peppered with handclaps, bubbling drums, and raucous choir vocals. Young has described his live performance as “a Sunday mornin jook joint,” and that description definitely applies to tubman, an album that applies the jubilant sound of church music to secular concerns. Early standout “Comb” a lurching, libidinous number, built around a throbbing wah-wah guitar and a pulsing bassline, clearing the way for an impassioned vocal from Avery, whose worked-up-preacher vocal style sets fire to every note it hits. “Get To Know a Nina Simone Song” is twitchy and worked up, its fitful, spastic guitar recalling prime Sly & the Family Stone. Like much of Tubman, it slides cleanly into a roaring chorus, where brass bursts go off like fireworks around Young and his choir of backing vocalists. If there is a recent reference point for tubman, it’s Damon Locks’s Where Future Unfolds. Like Locks, Young drawns on the music of the ‘60s to tell contemporary stories. Also like Locks, the results are undeniable.

On their final record Denver-based trio Homebody find a way to make their experimental, doomy post-punk both more accessible and even weirder at the same time. Always kind of a difficult band to describe in that the music isn’t unpleasant to the ear while also not really seeming to want/care about listeners, all of the songs on Human Ecstasy feel much longer than their running time because there are so many ideas at work at once. Sometimes they can even feel like more than one song at once, as the band’s quick musical chemistry allows them to seamlessly shift moods and genres. Still Homebody is resolutely minimalist overall, which suits their insular attitude—”Stay home,” singer Michael Stein advises on “Household Assimilator,” a 7-minute long song that might be the purest distillation of this band’s musical output and cynical perspective.