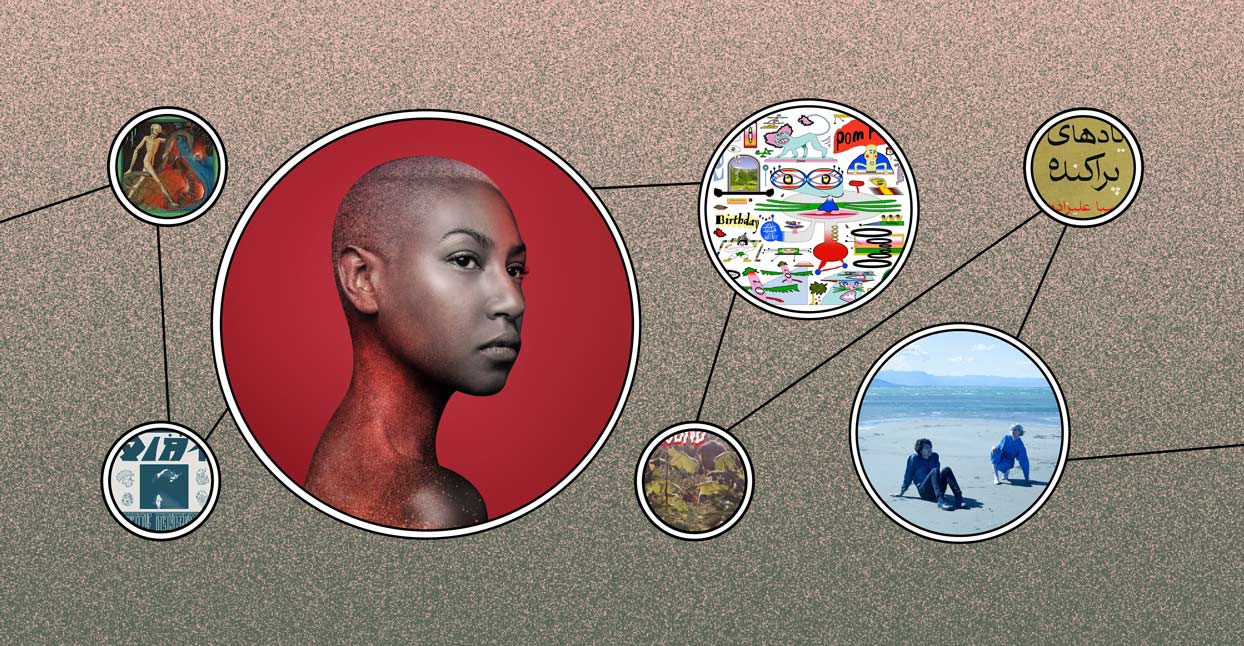 [Editor’s Note: Due to—let’s call it a “clerical error”—Spellling’s Mazy Fly appeared in the February 8 edition of this column. It is being released today, and it remains essential.]

The Iranian spike fiddle looks the way you’d imagine: it’s a narrow instrument with an unusually long neck that juts out sharply from a small, spherical body. But the sound it makes is anything but violent: in the hands of master player Saba Alizadeh, it makes a haunting, brittle sound, reedy and flute-like, sorrowful and hopeful all at once. Alizadeh, who is hailed as one of the instrument’s best players, wrings every available texture and tone from it across the length of Scattered Memories, an album that is a tribute to his home city of Tehran and employs field recordings and samples captured around the city to give Memories a sense of place and scope. The combination works beautifully; because Alizadeh’s playing is so abstract, it intermingles gently with the snippets of bird sounds, rushing wind, passing cars and whispered voices to create a kind of collage effect, for songs that are more about immersion than hummability. “Would You Remember Me,” with its slow, sparkling wind chimes, ASMR-like murmuring, and scattered electronic wooshing, raises gooseflesh; “Ladan Dead End” is spidery and unsettling, and the ominous symphonic crescendos that swell and vanish haphazardly make it feel shadowy and imposing. The word “transportive” is thrown around often in relation to art, but Scattered Memories actually achieves that—shutting down the world around you and gently leading you to someplace new.

Berlin post-punkers DIÄT made one of my favorite albums of 2015, Positive Energy. The long-awaited follow-up, Positive Disintegration, builds on Positive Energy’s limber early ‘80s-influenced sound and dry, smart lyricism, with giant guitar hooks, a bouncy, taut rhythm section, and deftly placed textural analog synth. It’s a bit less frenetic overall, but even more droll: see “W.I.G.T.D.W.M.,” which stands for “What’s It Got To Do With Me,” a perfect puncturing of the bubble around those who can’t understand what we’re all so mad about these days. (This frustration with inaction bleeds over into “Dogshit” and “Only My Own.”) Mark E. Smith comparisons are a dime a dozen, but the way DIÄT needle at the everyday hell of modern life and the expectations of the middle class absolutely make me think of that wizened apple puppet (Brix Smith-Start’s words, not mine) at his best. And ugh, do those riffs get me under the breastbone. What a great goddamned band.

My friend Chris Berry’s joke about “the punk-to-techno pipeline” is something I think about a lot, as someone who used to hide in a bathroom in between the hardcore matinee show and the rave night that happened in the same space because they were underage and wanted to go to both. While they might seem like polar opposites instrumentally, they share a lot of musical history and a lot of commonality —there’s something both primal and communal about both styles, the core rhythm often being less essential than the surrounding filigree, and it’s possible to do a lot with a few resources. That conservation of elements is something the Barcelona duo Fatamorgana, who have punk backgrounds, excel at; their debut LP is incredibly charming, hooky minimal synth work. The drum machines are spare, the synths mega-dreamy, the melodic lines delicate, and Patrycja Proniewska’s lovely vocal tone makes her near-monotone lines glow. With just these tools, they’re able to swing easily from the crisp and infectious disco handclaps of opener “La Atlántida” to the chilly atmosphere of “Universo,” where Proniewska’s hanging vocal warps into a held drone that pans back and forth, and beyond. The clean production, with studio manipulation used judiciously, helps these efficient songs pop. It’s hard not to get immediately entranced.

There’s an elegant simplicity to the music on Dominique Fils-Aimé’s stunning second record, Stay Tuned!—there’s not an element there that doesn’t need to be. “Gun Burial,” one of the album’s endless series of highlights, consists of little more than Fils-Aimé’s voice, a bone-dry drum track, and a creeping bassline (a string section appears and then vanishes just as quickly); the gorgeous “Constructive Interference” also makes ample use of Fils-Aimé’s soulful alto, layering it tower-like over a crackling rhythm track and a few pulses of bass; and the showstopper “Free Dom” lets the vocal stand alone for a full two minutes, providing both rhythm and melody, before the rest of the band joins in, adding just the outline of shape and texture. The judicious paring-down only heightens the album’s impact: every song lands hard and works its way immediately into the bloodstream, and Fils-Aimé’s masterful performance—she is a master of both vocal control and expressiveness—lends a scorching potency to every word. Which is good, because for however stripped back the arrangements are, her lyrics are rich, carefully crafted, and full of strength, power, anger, and pain. She deftly juxtaposes ballads of love and heartbreak, like the stirring “Revolution Serenade,” with moments of bracing, solemn urgency: halfway through the buoyant jump-rope chant “9LRR,” a voice in the background begins reciting the names of the Little Rock Nine. Stay Tuned! Is a riveting record that uses minimal arrangements to deliver maximum impact.

Funereal Presence is a one-man killing machine manned by Bestial Devotion, a fine young man from New York who made his name as the drummer for revered black-metal band Negative Plane, currently fashioning old-school, down-and-dirty black metal by his lonesome. Continuing down the frost-caked, blood-stained path he charted on 2014’s debut album The Archer Takes Aim, his gloriously-discordant new album, Achatius, affirms Bestial Devotion as a USBM board-wizard to watch. These four rippers, however exorbitant in title, ambitious in style (classical guitar intros, anyone?), and intimidatingly-long in length, carry an distinct DIY charm: particularly the archaic, lo-fi mix, which is so drippy and dank-sounding, you can’t help but wonder if its creator recorded it from the depths of an abandoned sewage drain. “To all lone wolves & leftovers out there who still worship the long forgotten maxim ‘black metal shall be gruesome, ugly and cold,’ this truly is for you!” reads the album description — ’nuff said.

Norwegian art-rock quartet Pom Poko are so named for 1994’s animated movie from the esteemed Japanese animation team Studio Ghibli: a fantastical tale in which a village of tanuki (shape-shifting raccoon dogs) are forced to do battle against the urban developers invading their forest. As far as I can tell, their debut album Birthday contains no lyrical references to the aforementioned classic, but it’s guided by the same spirit. Leavening Ragnhild Fangel’s airy, clean vocal melodies with gnarled, mathy freak-outs, their eccentric blend of art pop and noise rock traces that same overarching conflict between unspoiled nature and man-made destruction, to spectacular musical results. My personal favorite moment on the album (and perhaps the first instance of a band evoking Parts & Labor and Dirty Projectors simultaneously) is the delicious breakdown midway through “Blue,” a sugar-coated nightmare masquerading as an otherwise-unassuming dream-pop confection. I can’t wait to see what direction these promising otakus take their whimsical madness next.

With a new solo record from La Luz frontwoman Shana Cleveland due out via Hardly Art in a few weeks, I was moved to revisit Oh Man, Cover the Ground: a dulcet post-folk LP credited to Shana Cleveland & the Sandcastles that arrived quietly in 2015 to rather sexist reviews pigeonholing Cleveland as third-rate songwriter who could play guitar and sing pretty good, anyway, even if her lyrics didn’t really mean anything, and hey, doesn’t this sound like early Cat Power? Well. There’s no accounting for taste, but it’s hardly surprising that the tender buds of Cleveland’s musical genius—and she is a genius—would be overlooked on a record that presents as delicately ramshackle and inoffensive psych-folk, which it is, a bit; Cleveland’s fingerpicking has more than a pinch of Pentangle in its intricate patterns and liquidy slides on the loping “Itching Around” and ruminative “Holy Rollers.” But Cleveland doesn’t write songs so much as conjure up self-contained sonic worlds rooted in organic sounds and abstracted by a dream logic that find her pushing at the edges of the liminal spaces between worlds, seasons, people, and lives both lyrically and musically.  On La Luz’s breakthrough single, Cleveland sang of a love “as sure as spring.” Here she dreams of wandering a world “covered in gold, covered in pink.” And later, she sings of “cutting across the country lengthwise/looking for a new scene/this one’s getting old.” Overall, the 13 tracks on Oh Man, Cover the Ground find a laid-back Cleveland in an exploratory mood, her meandering songs gently bolstered by the warmer sounds of clarinet, cello, and piano when necessary, giving the record a autumnal, transitory feel. What remains constant is Cleveland’s breathtakingly naturalistic musicianship. On a Shana Cleveland record, the guitar isn’t a medium for expression so much as an extension of the musician herself, and to listen to her songs is to be gently cradled in the space between what she sings and what she wrings from woods and string.