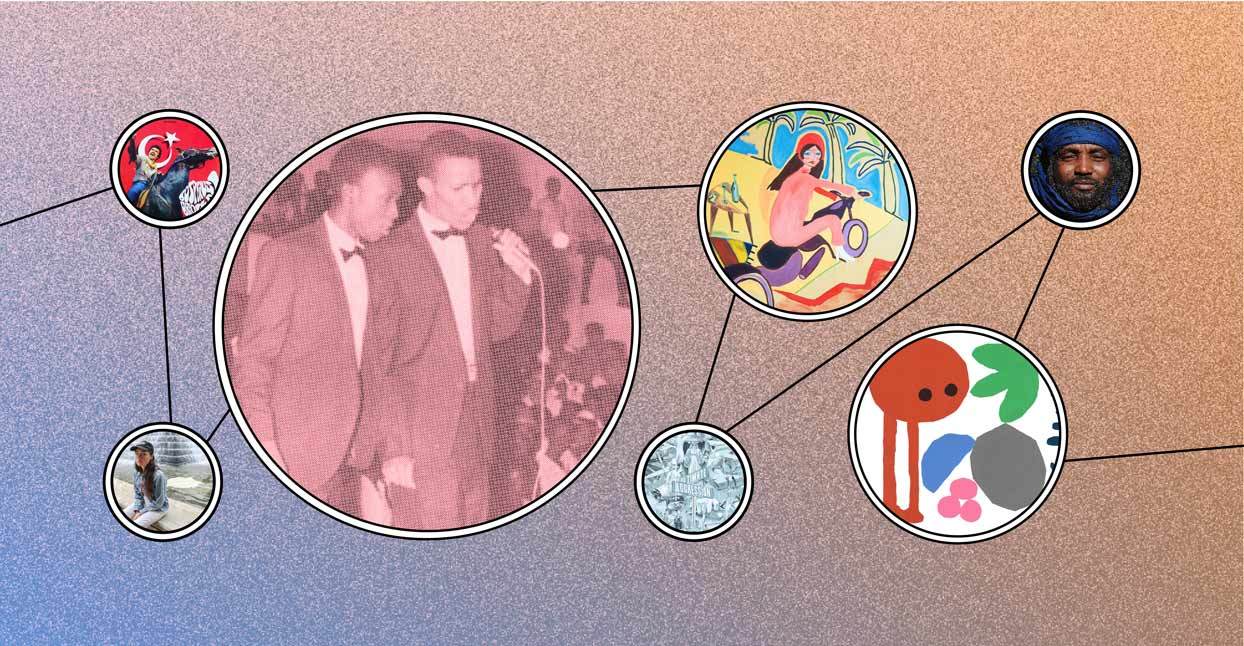 Anemone is the dreamy psych-pop brainchild of Chloé Soldevila, a classically-trained, jazz-fluent performer from Montreal. Ironically for an album recorded in the dead of a harsh Canadian winter, their debut Beat My Distance resembles the aural equivalent of a beach-town postcard, its airy shoegaze atmosphere drifting in and out at a leisurely tide. That calming, sun-dappled backdrop, in turn, helps Soldevila’s sweet, simplistic hooks ripen to perfection: organic alchemy at its finest. Such is Soldevila’s goal with the LP, a clearly-stated one at that; on the early-half, Slowdive-esque highlight “Daffodils,” she proclaims, “Where you go, I want to be a hole inside your head.” And judging by the sound of Beat My Distance, this promising upstarts gets what she wants, without fail.

Two albums into their career, the Tuareg band Kel Assouf already boast an impressive CV. Frontman Anana Haroun cut his teeth playing in world-famous desert blues band Tinariwen, and the band’s keyboardist, Sofyann Ben Youssef, is the creative force behind last year’s stunning AMMAR 808 project, which was one of Bandcamp’s Best Albums of 2017. And while the traditional shorthand for desert blues defines the genre by its gentle, rippling rivers of guitar and weaving vocals, on Black Tenere, Kel Assouf make it clear they have no interest in clinging to tradition. The album is a full-boil rager, smash-cutting desert blues together with rock and psychedelia on songs that pound and heave and pounce. Take “Alyochan”: those silvery wires of guitar obey the genre’s typical loping patterns, but they’re caked in distortion, razor-edged and biting; the all-tension rolling tom rhythm sounds like something out of the John Bonham playbook, and Ben Youssef ladles the song with a healthy helping of synths, inching in the direction of the wiggiest prog. “Amghar” is a lurching blues number with a throbbing backbeat that makes the most of its grizzled guitar lead, and album closer “Ubary” is a head-spinning riff-fest, with enough nimble fretwork to bowl over even the stubbornest power metal fan. Black Tenere is a scorching record that reimagines rock from the ground up.

When listening to After Its own Death/ Walking in a Spiral, a collection of recordings made by Liz Harris of Grouper under the name Nivhek, one question comes to mind: is this music? The answer isn’t no—it’s hard to deny that the nebulous and ever-shifting layers of reverb, vocal tracks, and isolated instruments do take melodious forms when and where they choose—but it isn’t exactly yes, either. These aren’t songs so much as ruminations running the gamut from hauntingly celestial to eerily raw; deeply personal sonic experiments that require close attention to grasp their many subtleties and occasional profundities, but won’t demand it. That part, just like the answer to the question posed above, is on you.

Brickbat, the debut full-length from “don’t call us a supergroup or Britpop” Britpop second act supergroup Piroshka arrives with swagger to spare and swirling sonics happily recalling the softer pop elements of front woman Miki Berenyi’s work in Lush. Starting out with the feisty “This Must Be Bedlam,” the group attacks 21st century life with a mix of exasperation and bite, tempered with songs that sound more blissful than bitter. Most of all, the members of Piroshka sound like they’re having a lot of fun—and the elation is infectious. “Hated By The Powers” is the album centerpiece, a euphoric declaration of love and solidarity in the face of entrenched systems of power that threaten to destroy everything good in the world. Hey, the olds are alright!

Anyone with a passing interest in non-Western music already knows that Turkey was a hotbed of funk and psych music in the ‘70s, and artists like Selda an Cem Karaca have been finding their way into enterprising DJ sets (as well as Mos Def records) for years now. But the thrilling third installment in the Bosporus Bridges series suggests that crate-diggers have only begun scratching the surface. The 13 tracks here are all knockouts—fiery, worked-up slabs of psyched-out funk music that deftly weave in elements of traditional Turkish music without disturbing the groove. Witness “Gurbet,” where Semra Sine’s vocal follows the hypnotic melodic pattern of traditional music while the band snuggles tightly in the pocket beneath her, peppering the song with wah-wah guitar and rat-a-tat rhythms. “Hey… Taksi” is a smoldering R&B workout, with a bassline that clambers up and down the octave as vocalist Fatos Balkir pleads and hollers above it. And “Yildiz,” with its bleary horn line, spaced-out synths, and group-sung refrain, is just waiting for an enterprising beat tape maker to pillage it. And while occasionally comps like this are frontloaded with bangers and tend to taper off as you approach track 11 or 12, Bosporus Bridges slams from start to finish—a searing set that proves there is plenty of vital Turkish funk left to be discovered.

Various Artists
If I Had a Pair of Wings: Jamaican Doo Wop, Vol. 2

Soundwise, the second installment in Death Is Not the End’s series dedicated to Jamaican Doo-Wop doesn’t vary too much from the first one; listen without a track listing or any historical context, and you’d be forgiven for assuming these were American private press doo-wop singles gathered up Numero Group-style and compiled for rediscovery. But that doesn’t make the album any less of a winner. Aside from the thrill of getting to hear future reggae legends like Derrick Harriott and Prince Buster at the earliest stages of their career, If I Had a Pair of Wings also holds its own as a showcase for what happens when doo-dop is done right. Jiving Juniors’ bell-clear falsetto voice on “Have Faith in Me” raises gooseflesh, and the way it arcs impossibly high over the subtle, restrained rhythm section makes for a gorgeous demonstration of dynamics. The subtle ska rhythm and looping horn solo on Prince Buster’s “Now You Want to Cry” hints at the direction Jamaican music would soon take, but Buster’s swinging vocal is pure Enchantment Under the Sea slow-dance. Rupert Edwards’s “Guilty Convict” borrows the cadence and vocal melody of traditional blues, but peppers it with a banging piano line that wouldn’t sound out of place in a Jerry Lee Lewis song. Full of sweet, subtle charms, If I Had a Pair of Wings is the kind of valentine that lasts long after February 14th is over.

Year of the Knife
Ultimate Aggression

A little over a year ago, at the Polish catering-hall-turned-performance-space Brooklyn Bazaar, I watched a Delaware straight-edge crew bring NYC’s hardcore community to its knees, humbly and promptly, in just over twenty minutes. These young people certainly don’t refer to themselves as Year of the Knife for nothing; their brutalist, death-metal-flavored rippers cut to the quick of their home state’s present crises (namely police brutality and opioid addiction) and grind them down to dust, without resorting to scene posturing or self-serious affectations. Now that they’ve signed with heavy-music mainstay Pure Noise, a proper crossover is all but certain, which gives us the perfect opportunity for an amended trip down memory lane, in the form of Ultimate Aggression. This re-recorded collection of the band’s past material, buttressed with new vocals and mixing offers, is a must-listen for the circle-pit set, or anyone craving something real.

Calum Bowen’s original score for the indie puzzle platformer Pikuniku holds true to its source material, which is to say it’s adorable, absurd, and a little unnerving. Don’t be swayed by its childlike cover, or the chirpy electronic palette: these 45 songs actually soundtrack the player’s attempt to crack a dystopian, deep-state conspiracy and kickstart a revolution, one blobby step at a time. Accordingly, minimalistic gems like “The Rainy Mountain” and “The Spikes” find Bowen exploring the threshold between merry instrumental pop and melancholy ambient, and reaping the dynamic benefits of both. Like the rest of Bowen’s game-related discography (particularly his compositions for Pakka Pets, Super Ubie Land, and other Steam favorites), Pikuniku‘s score offers a nostalgic listen, but a mature one as well. If Yoshi was a card-carrying DSA member — which he probably isn’t, considering he committed tax fraud, but that’s besides the point — he’d bump this shit 24/7.