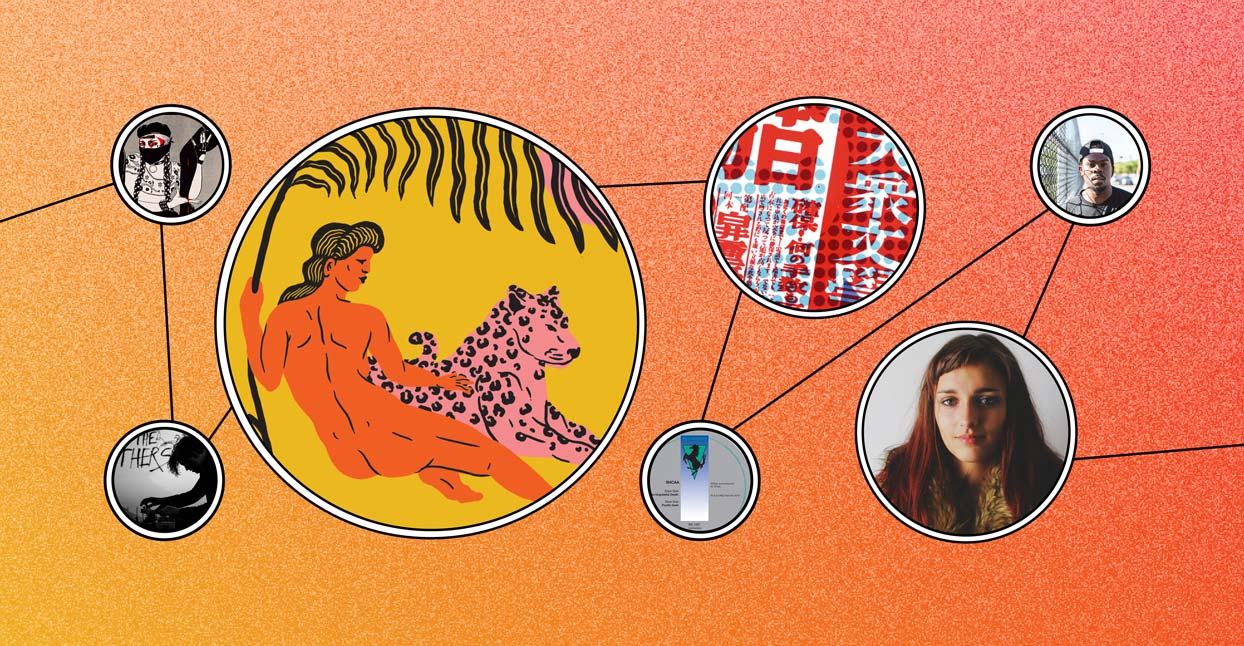 Most listeners know guitarist Dave Harrington for his spaced-out work alongside Nicolas Jaar in the experimental rock project Darkside. Over the past several years, he’s also proven himself a commendable bandleader in his own right, leading an ever-shifting cadre of musicians through a series of improvised rituals influenced by free jazz, psychedelic rock, industrial ambient, and more on 2016’s, Become Alive: a technically-stellar, albeit over-meandering full-length LP. The follow-up, Pure Imagination, No Country, makes up for its predecessor’s lack of inertia with a sharpened, slightly more linear approach to songcraft on tracks like “Belgrade Fever” and “Then I Woke Up,” which recall Pink Floyd on an instrumental acid trip. Harrington’s backing band — featuring the talents of vibraphonist Will Shore, electric pianist Lars Horntveth (also of Jagga Jazzist), and drummer Samer Ghadry, among others — makes an especially strong showing here, buttressing their leader’s astral-projecting riffs with bleak, hypnotic arrangements that render the interstitial simply extraordinary.

One of the most wonderful things about Chicago’s vaunted Teklife crew is how distinct their overall aesthetic is, while simultaneously making room for each individual artist’s unique (pardon the pun) spin. The late DJ Rashad (RIP) had an ebullient house-y style that sometimes tipped over into feeling manic or claustrophobic in a fascinating way; RP Boo’s sound is raw and heady; DJ Taye raps, with aplomb, over his own fresh, future-facing production. DJ Manny? Well, his work is serpentine, dark-edged, minimal. He places those crisp Teklife beats carefully, letting each one almost hang in the air for a second, in order to clearly define his sleek tracks’ movement. Let the Music Talk V1 appeared last weekend with little fanfare, but it’s a monster of a record. Opener “Night Crawler” sets the tone, ominous and fractured but simultaneously a little sexy. It’s clearly meticulously sequenced; the Zapp-and-Roger-style processed vocals on the dreamy club banger “Information” are eventually squashed and mutilated into an alien transmission on the track that follows, “Give It Up.” Closer “Wanna Get Crazy” might be the most classic footwork piece on the album, but it pairs those frenetic beats with icy minimal synth work and vocal samples that I can only describe as “quiet storm come-ons delivered by a ghost.” I love so much when a record works simultaneously on a micro and macro level, when there are endless details to savor and yet one doesn’t need to focus on them in order to understand or enjoy what’s happening. Just (I know, I know)… let the music talk, OK?

On Gaijin Blues, Belearic-ambient producer Naphta and his trusty sideman Playstation Yoga Music parlay their deep love of Japanese pop culture (particularly role-playing video games) into a smooth, laid-back electronica suite straddling east and west. Whereas many of their otaku peers would be content churning out a “Cruel Angel’s Thesis” cover and calling it a day, the Polish duo traffic in all-original crossovers that capture, but never copy, the essence of a given work. As a diehard Persona 5 stan (I love you Makoto!!!), I couldn’t help but squeal when I first heard Gaijin Blues’ slinky homage to “Cafe LeBlanc,” the fictional coffeeshop where much of the game’s action takes place: its plush synths, organic percussion, and jazzy flourishes bely its makers’ painstaking study of—and respect for— the storied source material. Naturally, I’m awarding some bonus points for the badass musical shout-out to Metal Gear Solid‘s Metal Gear Rex, one of the most historic boss fights of all time. Bandcamp-browsing weeaboos, this one’s for you.

If the titles on her debut EP are any indication, 16-year-old singer/songwriter Gabriella Rose has a thing for the movies. There are songs called “Lost in Translation” and “Welcome to the Dollhouse,” and in “Requiem” she sings, “I don’t go to the movies anymore” as a way to indicate her bone-deep sadness. But if Translation is any indication, it’s understandable that Rose would have escape on the brain. The album’s themes are heavy: “Requiem” deals with the death of her grandmother, “Dollhouse” takes an unflinching look at self-harm, and Rose’s own story is colored by sadness, growing up in what she describes as a “dysfunctional family” and weathering a brief stay in a psychiatric ward. Handling such weighty material is tricky, but Rose does so with grace and sensitivity throughout; at times, the sound of her robust alto, gliding over a bed of acoustic guitar, recalls Emmylou Harris circa Pieces of the Sky, and even the saddest songs have subtle hooks: the way Rose gently floats up to falsetto on the chorus of “Requiem,” the way “Lost in Translation” rocks slowly forward and back, Rose leaping up to hit the first syllable of each word like she’s reaching to pluck something off a too-high shelf. The five songs on Translation mark Rose as a confident, assured singer and songwriter, with plenty on both her head and heart to communicate.

Following a smattering of releases on noteworthy labels like Blank Slate, Archipel, and Sharingtones, Shcaa (better known as Parisian guitarist and producer Sacha Khalife) has signed with institutional electronica purveyors R&S for a new double single, containing 23 minutes of rubbery house grooves — or as I see it, a fully-realized EP trojan-horsing as a single. Despite making continuous pivots between dubby, Darkside-esque psychedelia and brutalist minimalism à la Aphex Twin, An Ungrateful Death keeps a disciplined pace throughout, with Khalife shuffling textures from the top of the mix on down: a funky guitar stab here, an unadorned vocal sample there, and darkness everywhere else. The ironclad, interlocking rhythms driving the A-side makes it a little better suited for the dance floor than the backing “Pacific Gold,” but it’s too cold to cut a rug anyway right now, so who cares?

Libérate, Volumen 1 & 2, from the Los Angeles band YANGA, may draw on the rich source material of Colombian music, but it would be impossible to mistake it as a product of anything but the here and now. The songs throughout are lithe and springy: the wheezing accordion that powers “La Veterena” galumphs like a slinky slowly working its way down a flight of stairs; album-opener “Encendemos” bubbles and pops relentlessly, a flurry of percussion batting around a bassline like it was a birdie in a badminton game. And while anyone with a working knowledge of Caribbean music can trace the album’s stylistic roots—the hurricane rhythm of cumbia here, dubby garabato there—all of the songs on Libérate are shellacked with a thin layer of distortion, making them sound less like archival finds and more like scuffed-up DIY recordings. That anti-polish is one of the things that makes Libérate so alluring; for the bulk of the record, it sounds like you’re listening to a party raging in the room of the next flat, one that you wish you’d been invited to. And while the back half of the album is given over to instrumentals of the first half, the songs practically demand the presence of vocalist Eddika Organista, who belts out each line with fire and gusto. Libérate is a tornado of sound; it’s impossible not to be swept along with it.

Blink and you’d miss this quick and efficient four-track release (I did, apparently)—but once you’ve heard it, it’s tough to forget. This is bright, catchy, mid-tempo Spanish-language punk from the Bay Area, impeccably recorded. (They share at least one member with Ruleta Rusa, who expertly bridge the sounds of mid-‘80s London, Barcelona, and Mexico City; Deseos Primitivos have a similarly classic punk feel.) Bouncy basslines! Shout-along vocals! Splashy drums! Sizzling guitar solos! Absolutely delightful, with ultra-catchy hooks and effervescent energy; A terrific formal debut for a relatively new band (with only a live recording and demo previously under their belts), and a sonic respite from the housebound winter doldrums.