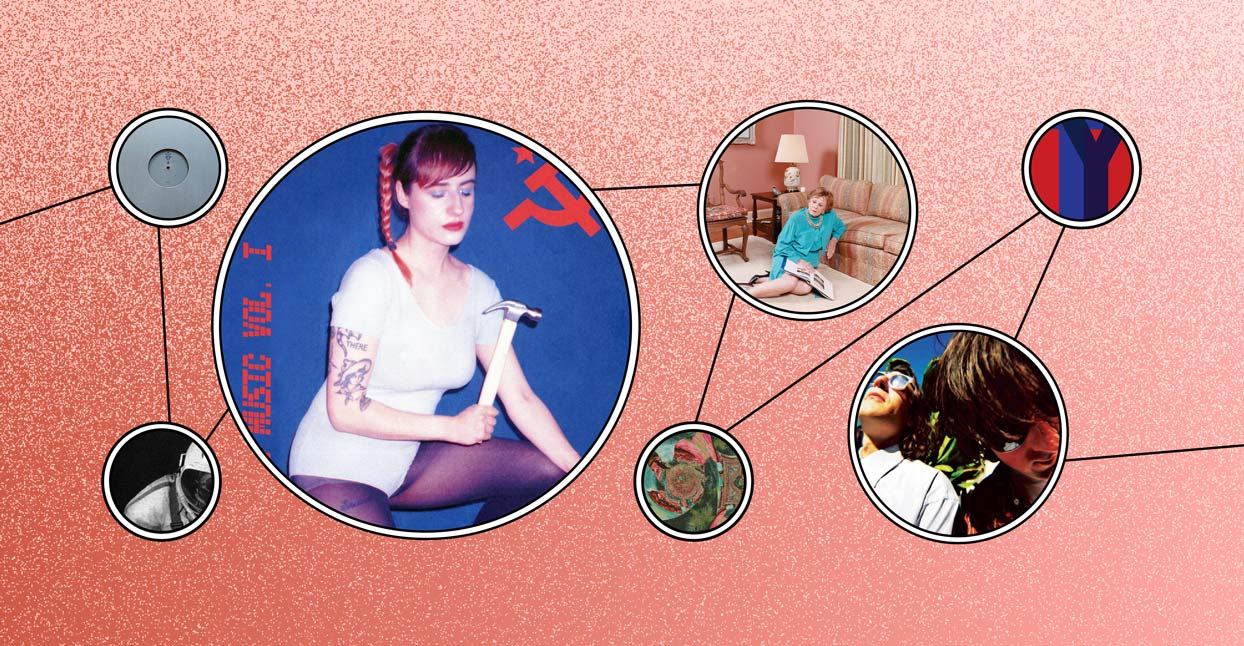 Our Senior Editor Jes Skolnik and I share an affection for ‘80s industrial music, so whenever they hit me up in Slack with an album link saying, “I think you might like this,” I tend to press play immediately. Once again, they were right: I love this. Released by the midwest label Chicago Research (who we’ll be profiling on the site next week), Club Music Vol. 1 offers five tracks of doomy, bass-heavy EDM. This is the kind of music that used to come pulsing out of the speakers when my high school friends and I would descend on Long Island goth clubs: “Western World” is built around a slap-electro-bass melody, and the background is ornamented with all sorts of little flourishes: robotic hand-claps, someone blowing a whistle (for some reason), split-second DJ scratching; “Step In2 the Grid” is more ominous; distant, distorted vocals holler out unintelligible commands, a fat bass-synth line pulses insistently, the occasional glimmer of a minor-key synth line drifts across the background. What I like most about this is the way it kind of exists at the intersection of early industrial and early Chicago house—those bright orchestra hits that pop up throughout on “Purity for the People” could come from nowhere else. And so in addition to feeding my need for low-lit, dance-while-looking-at-your-hands music, it also prompts connections between genres I hadn’t thought to make before.

I was deep in a tag-surfing session the other day, clicking my way through the vast, clusterfuck-y world of “psychedelic metal,” when I came across a intriguing specimen known as Fishslaughter: a long-dormant, recently-revived “true aquatic black metal” project helmed by one “Glub, 37th Imperator of the Trout Order;” who claims to hail from Cuba, but is actually based in Connecticut. Their latest LP, Morfar, is an aquatic concept album, benefitting the Ocean Conservacy that shines a spotlight on the grim fate of our seas, the inevitable collapse of humanity, and—in a serious break from black-metal tradition—octave mandolin. Accordingly, guitars crop up on just one of the record’s 8 tracks, not that you’ll really miss them; the bristling, weepy textures endowed by the axe’s eight-stringed cousin imbue Fishslaughter’s harsh arrangements with a naturalistic churn befitting of its almighty subject. Plus, as an added bonus for Bandcamp users, Glub and company even toss in a furious take on “Garota de Ipanema” (“The Girl from Ipanema”), Stan Getz and João Gilberto’s bossa-nova classic from 1973. Take the trip. Save the dolphins.

A little over a year after dropping their first collaborative release as Flame 1, Burial and the Bug have linked up for a short form release titled Dive/Rain (this time under the Flame 2 moniker). The two tracks, which arrives amid an active year for the pair (two albums, plus a joint EP with Godflesh’s Justin Broadrick, for the former, a Hyperdub EP for the latter), is just what you’d expect from the IDM titans: an apocalyptic, audiophile-baiting two-fer situated at the intersection of industrial and ambient, fine-tuned to intimidate, as well as entice. Maybe “predatory” is the best way to describe Bug and Burial’s approach to the listening experience; “Dive” ensnares trap percussion within a tattered web of static like a spider catching a defiant (but doomed) fly, while “Rain” drags an otherwise-sturdy beat through the depths of harsh-noise hell. The EP, however harsh, ultimately comes short of the insanity associated with an artist like, say, Merzbow, making it a great entry point for those looking to explore electronic’s dark side.

So Sensitive is a New York duo consisting of vocalist Kira Clark and producer Keith McGraw. The two created So Sensitive after dissolving their previous rock project, Muscle and Marrow. Their So Sensitive debut, Bedroom Drama, is a sensuous and serious synth pop record with overarching themes of femininity, sexuality, and sadness. Over the drums of upbeat opener, “My Heart is Open,” Clark sings, “I never do what I’m told.” Elsewhere, over the steady synth beat of “What’s My Body For,” Clark slowly sings, “What’s my body for? I want so much more.” Of their sound, the band has described it as what happens “after two sad(ish) people listen to a lot of Britney Spears,” and that rings true. Bedroom Drama is an album that invites the listener in as the duo works out their thoughts about themselves and their place in the world. It feels like a meet-up with friends sharing their intimate ruminations but with a score of strong, infectious synth beats. Bedroom Drama is a solid debut with serious undertones that seems right on time as we slowly fade from summer to fall.

It’s clear pretty much from the jump that the astronaut on the cover of the new EP from the Turkish label Sumatran Black is in some kind of trouble. He’s just sort of hanging there, in close-up, against the deathly blackness of space. Whatever ship he took to get out there is nowhere in sight. The three songs that comprise this EP perfectly capture that feeling of sickening desolation. Sumatran Black describe the music they release as “Necro Chill,” and that pretty much nails the vibe. Album opener “The Mission” starts with a long, deep drone, gradually layering an extended, smoky, three-note synth melody. They extend each note for what feels like an eternity, and the fact that the song evolves so slowly only adds to the feeling of chilling isolation. On “Is This Heaven? (это рай)”—I’m going to guess the answer to that question is “Nyet”—high, keening notes extend far into the horizon, spilling across the song as slow as morning sunlight. The title track is by far the most chilling: there’s a blur of static in the background, and then a sustained orchestral swell that gradually pitch-bends into something sickening and uneasy. They repeat this pattern again and again—coming back down to the calm stasis of the crackling tones, then introducing the strings all over again. It feels like the awful internal cycle of panic, calming down for a few moments, then remembering your situation and panicking all over again. Sumatran Black say their music is designed for “contemplation”; they never tell you that what you’ll be contemplating is “the void.”

In just three short years, YUNGMORPHEUS has already established himself as one of the West Coast’s most intriguing rappers. On last year’s Strapped 4 Survival, he and co-producer VIK conjured the humid sound of early ‘90s California hip-hop, slowing down samples to create a canvas of low-riding funk for MORPHEUS’s laconic rhyme style. On Mazal, he’s paired with the producer Fumitake Tamura, who constructs woozier, synth-based backdrops that at times feel like variations on ambient and avant-garde electronic music. It’s the perfect, glimmering counterpoint to MORPHEUS’s understated approach. There are hints of the insularity of rappers like Earl Sweatshirt and Tyler the Creator in MORPHEUS’s voice, but his approach is decidedly more pointed and more cutting. On “Last Days // Ashtrays,” he launches a calculated assault against systemic racism while the scuffed-up sound of an ice cream truck twinkles beatifically in the background. On “Quantam Leap,” Tamura scales things way down, sticking mostly to a two-note melody pattern, drawing all the attention toward MORPHEUS’s grim, croaking vocals. There’s a deliberateness about the way MORPHEUS raps that makes him impossible to ignore—there’s no breathless, rushing through verses on Mazal. Instead, he lays every syllable gingerly in the groove, and his methodical approach makes his caustic lyrics land even harder. Even when he’s doing nothing more than big-upping his own skill, as he does on the bleary funk of “General Barca,” his focus is both palpable and riveting. Mazal is a showcase for a rapper in full control of his formidable abilities.

After four albums of increasingly sophisticated psych rock Cosmonauts reach burn out status on their fifth LP, the bummed and buzzy Star 69. A detailed and driving record about crashing down in LA made by an Orange County band who’ve doggedly stuck to their disaffected drone-y guns and cherished musical influences for nearly a decade, on Star 69, Cosmonauts expand their sonic purview while sharpening their lyrical sense of cool disassociation from the maddening world around them. And you can actually hear the lyrics now, since the distortion and noise that cloaked their previous releases has (mostly) been scrubbed away, fully revealing the powerful rock band they always were underneath. Sometimes the band’s commitment to being too cool for school comes across as cynical—“love my little bubble/love my little scene” goes the sneering chorus of opener “Crystal”— but elsewhere there are jokes of a sort. Glassy-eyed music scene send-up “Media Litro” features a laundry list of things to do if you want to be famous, but the kicker is lifted wholesale from the Fall’s “Your Heart Out,” a reference you don’t make if you don’t care—about music, anyway, if not the music biz. Still, for all its posturing, there’s a dimly nostalgic feel to Star 69, and it’s not just in the heart-out artistic references and, for listeners of a certain vintage, its title. “Goodbye baby, your mixtape memory is already fading,” goes the first line of certifiable mid-album baggy banger “Faces.” Ah, say it ain’t so.