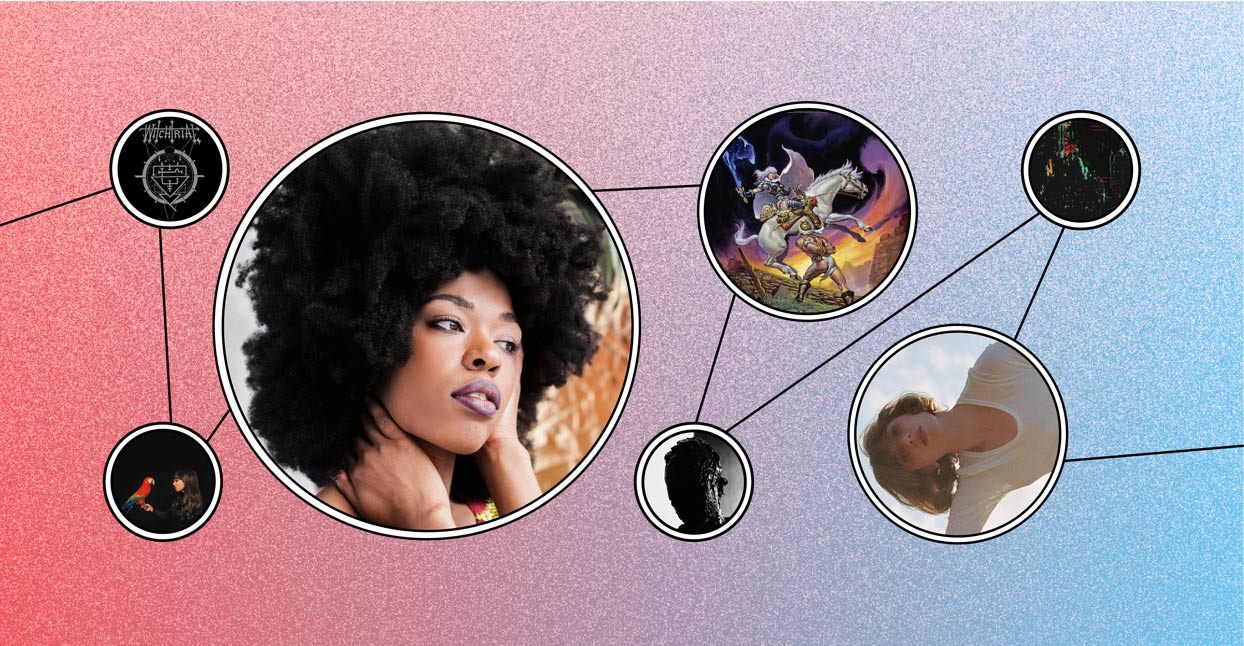 Yesterday, I was walking down the street to meet a friend for dinner; there was a group of people coming the other way on the sidewalk, and one particular member of that party gave me this stare. Being a gender-nonconforming trans person, I get that stare sometimes. The best way I can describe it is accusatory curiosity: what the hell are you?, as if my brief appearance in someone’s world has utterly scrambled their own self-conception and they’re furious at me for it.

In her liner notes to Comfort’s LP Not Passing, singer Natalie (who is also responsible for the electronics work in this post-industrial/punk duo), writes: “The worst part is that those of us that are alive and being ourselves are the lucky ones.” The number of trans people we have lost to homicide, to suicide, to overdose, to lack of resources, weighs hard on us and our community. We are lucky to be alive, and the inequity of that is painful in its own right.

So I came home last night and put on Not Passing, and it helped calm my nerves, which have been frayed for various reasons—those kinds of stares, which carry a threat, among them. (The opening title track addresses encounters just like this—it stares back steadily.) It is not a record that communicates pain so much as it communicates delight and fury. Over her brother Sean’s pounding live drums, which add not just structure and energy but help amp up the catchiness, and her burbling, sparking electronics sequencing, Natalie sing-shouts her frustrations and pithy, clear observations. She calls bullshit (“Liberal to All,” “…Promises to Heal Divisions,”) and calls for a better world in a refreshingly non-didactic way (“Together”). One might think such a minimal arrangement might start to feel same-y; it never does. Each track catches under the breastbone and lights up. This is the record I needed right now. It might be the record you need too.

(Speaking of records by trans punks that came out this week: a very different mood, but go check out Center of the Mile, the acoustic covers record by Ivy and Erica Dawn, of Black Rainbow and other groups, that came out this week. It benefits the Emma Deboncoeur Nursing Scholarship at UCSF/UC Berkeley, for students interested in trans and nonbinary-affirmative healthcare careers.)

In the late ‘70s, Serge Gainsbourg traveled to Jamaica and recorded a pair of albums with reggae legends like Sly & Robbie and The I Threes: Aux Armes et Caetera and Mauvaises nouvelles des étoiles. I couldn’t get those records out of my head while listening to the first album from Claude Fontaine. Like those Gainsbourg records, the band on Claude Fontaine is comprised entirely of reggae and roots music legends: Tony Chin, Rock Deadrick, Ronnie McQueen, and Jaime Hinckson. Also like those records, it juxtaposes a decidedly contemporary vocal style with the vintage sound of reggae and rocksteady. And—OK, look, this one is a reach—Claude Fontaine may live in Los Angeles, but her name is obviously quite French. In her interview with Andrew Jervis on this week’s Bandcamp Weekly, Fontaine discusses a life-changing trip to the Honest Jon’s record store in the UK, and the enthusiasm with which she speaks about those records is evident in every note of her debut. The whole album feels like a love letter: the springy groove and winding melodica on “Hot Tears” immediately calls to mind Jackie Mittoo, in a way that only a group of people intimately familiar with his music could. “Play by Play” has the deep and dank sound of The Congos coursing through every bobbing bassline. And though the album shifts into bossa nova in its second half, its reverence for that sound is as apparent as the love of reggae is in its first half. Fontaine’s voice is feather light—if you can bear another French pop reference, let’s say it’s similar to Jane Birkin’s—which is both the perfect complement to the breezy bossa and the perfect counterpoint to the weighty reggae. Claude Fontaine is a lovely tribute to the sound of an earlier era—with an assist from some of the people who helped create that sound the first time.

The ever intense Aldous Harding loosens her grip on our collective heartstrings with third LP Designer, her prettiest and most playful record to date. Where 2017’s Party was an emotionally fearless but sort of gloomy and gothic affair, on Designer Harding opens the windows and lets in some air, declaring her intention to “live with melody and have an honest time” on opening track “Fixture Picture.” The record’s atmosphere is sociable, the instrumentation charming and fairy-like with the gentle click of a metronome, a xylophone chime, or the baroque trill of a harpsichord serving as sparkly adornments for Harding’s phenomenal vocals, which have somehow become both softer and more steely than before. But Designer’s relative pleasantness doesn’t mean it’s a light listen. In fact, the record’s easier vibe makes the impact of Harding’s emotional truths that much more cataclysmic when they hit, as on the fantastical and fantastically sad “Zoo Eyes” or the chorus of “The Barrel,” where she delivers an unfortunate message in a sing-songy voice over a slinky groove: “It’s already dead!”

Talk about a great first impression: Times of Obscene Evil and Wild Daring, the debut full-length from Ontario metal band Smoulder, is a majestic slab o’ doom for the ages, offering up stunning production and hair-raising twists and turns on par with the latest season of “Game of Thrones.” I’m not just saying that because Sarah Ann K., the sword-wielding alto leading the charge, happens to be one of my colleagues here at Bandcamp (shoutout to our Support Team!), or because the album artwork, as Ben Handelman II (of Black Metal & Brews) tantalizingly observed, “looks like a Sega Genesis game that I would’ve spent months begging my parents to buy me in like 1993;” which is always a win in my book. What we’ve got here is metal of the dragon-slaying, ass-kicking, stick-to-your-ribs variety, packed full of solos that cleave and chug, vocals that glide and soar, and arrangements that stampede on and on miles. Is it technically a conflict of interest for me to inform you all that Smoulder fucking slay? Maybe. But I’m going to do it regardless.

Witchtrial are a DC-based speed-metal cult featuring players from across the East-Coast hardcore scene, from the Big Apple (Ajax), to Beantown (Firewater), to our nation’s capital (Red Death, Genocide Pact). The gleefully-decadent black n’ roll showcased on their 2017 demo — a hulking miasma of metal and punk originally limited to a small batch of cassettes, subsequently re-released through the always-reliable Beach Impediment Records — has garnered them a massive local following, bolstered by frequent comparisons to Hellhammer and Motörhead. Their first proper release—an eponymous EP produced by Merchandise frontman Carson Cox, and mastered by respected punk boardsmith Will Killingsworth—marks a charming, if caustic, progression in their sound; standouts like “Wait for the Reaper” and “Void of Form” crank out Tom Halford-esque squeals, nefarious guitars, and D-beat mischief at every opportunity, gesturing to a pugilistic definition of pleasure. Just don’t play it while driving: these rippers are so incendiary and wild, they’re bound to net even the most responsible driver a speeding ticket or several.

Maybe it’s the emotional runoff from seeing the Wax Trax documentary last week, but all I’ve wanted to listen to lately is music that reminds me of the first-wave industrial and EBM that provided the soundtrack to my early 20s. In other words, this new album from Maenad Veyl could not possibly have come at a better time for me. Maenad Veyl is the work of Italian producer Thomas Feriero, and with Body Count he’s delivered a masterful update on the classic sound of late ‘80s industrial music. There’s enough fealty to the past here to satisfy folks like me who grew up on this music, but it’s also bulked up and brutal enough to sound fully of-the-moment. “Silent Blood,” which arrives halfway through the album, is the perfect example of that balance: that jittery, minor-key synth line and so-low-you-feel-it-more-than-hear-it bassline wouldn’t be out of place on a better Front 242 record, but what he’s doing with the rhythm is the stuff of contemporary electronic music: the bass kicks are boulder-sized, and the hairpin switch-ups and fills sound like something Actress might cook up, were he in a particularly foul mood. “The Adversary” is four minutes of pure bleak glory, Feriero’s voice so distorted it makes Psalm 69-era Al Jourgensen sound intelligible by comparison. And what’s going on with that terrifying bird-call synth that swoops down 90 seconds into the song? Why does the whole thing feel more and more chilling as it goes on? Body Count is a record for late-night cruises through burned-out warehouse districts—as utterly gripping as it is completely unnerving.

Sudan Archives (born Brittney Denise Parks) is nothing if not unconventional. Her eponymous 2017 debut EP, Sudan Archives, is an avant-garde mixture of R&B, classical, house, soul, and West African influences. The singer and violin player masterfully merges her varied musical influences into a pointedly personal sound. Album opener “Paid” has an uptempo, bumping house beat and is expertly layered with Parks’ stunning vocals. Album standout “Come Meh Way” is a playful, rhythmic love song anchored by sweeping violin melodies. “I’ve got too much swag,” Parks harmonizes on album closer, “Wake Up”. Sudan Archives is a strong debut by an exciting artist who is just getting started.