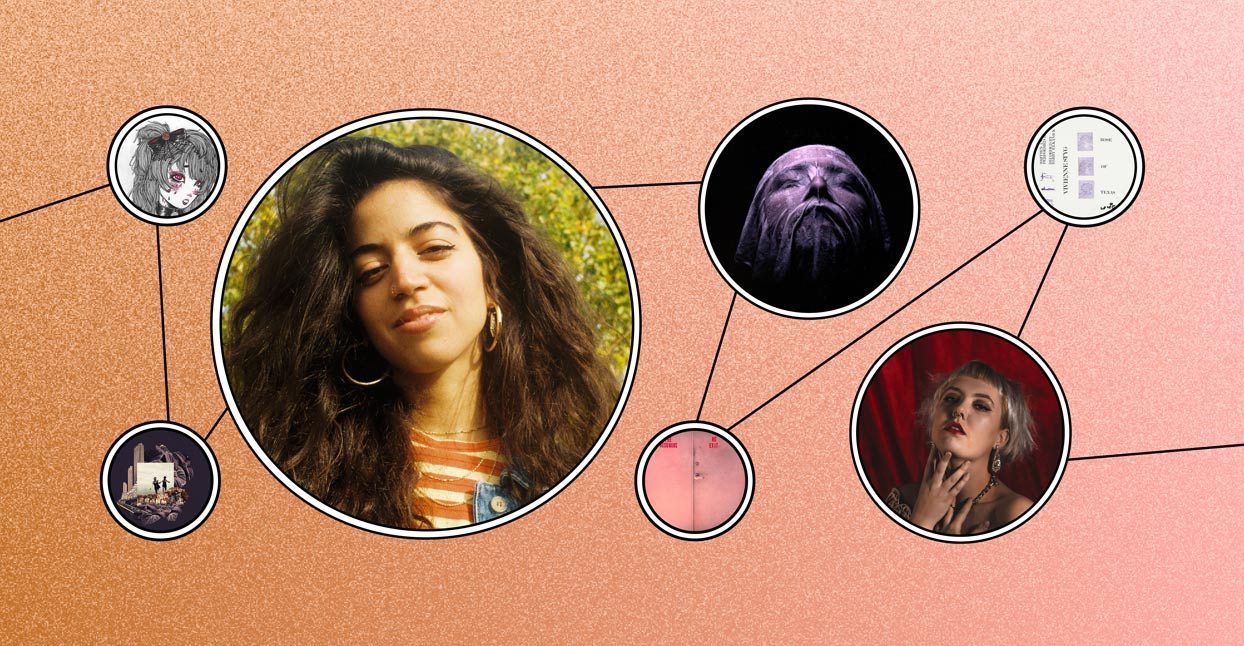 There’s a quote in this brilliant, house-of-mirrors interview with author Carmen Maria Machado on the 19th century lesbian vampire novel Carmilla that I can’t stop thinking about: “The Gothic can be conducive to suppressed voices emerging, like in a haunted house. At its core, the Gothic drama is fundamentally about voiceless things—the dead, the past, the marginalized—gaining voices that cannot be ignored.” And Gothic drama is something Sólveig Matthildur’s latest, Constantly in Love, is rich with; the Kaelan Mikla singer and keyboardist is well-acquainted with eerie atmospherics, of course, from her work with that trio and her previous solo electronic expeditions. Constantly in Love feels like a step forward for Matthildur into a more fully realized sense of herself as a solo artist—a voice, in other words, that cannot be ignored. Her pop songwriting skills are on full display—this would have been a huge hit for 4AD or Projekt in the late ‘80s or early ‘90s—and her sound feels deeper and more fleshed out than on Unexplained Miseries….

The tension necessary for that high drama, these tales of the plangent and often ugly need at the core of desire, is well-established, through curling vocal layers (“Tómas”), pulsing beats (“My Father Taught Me How To Cry”), and chord changes that feel like the bottom of one’s heart dropping out when attempting to vocalize a crush (“My Desperation”). The dark gem that is “Your Desperation” gets a lovely remix from likeminded Parisian artist Hante.; “My Desperation/Your Desperation” is one of two matched pairs on the album (“Dystopian Boy”/”Utopian Girl” is the other), more smartly complementary than strictly binary. Matthildur calls to the veils between worlds, asking them to play their shadows against the human heart. I’d imagine Carmilla, the spurned undead, might sway along.

Suzume by J. Lamotta is a refreshing neo-soul jazz album. The Berlin-based singer has returned with a sophomore album that is expansive in its borrowing from jazz, neo-soul, and hip hop elements. The multi-talented Lamotta produced each song on the album and provided additional percussion. Album single, “Turning” is smooth record that is heavy on percussion and has an infectious refrain. “Free the Jazz” incorporates spoken word over a jazz melody that sounds akin to early Les Nubians. Lamotta counts Bill Withers, Sun Ra, and Dilla as influences and studied jazz in New York before settling in Germany. Her interests in the aforementioned can be heard clearly throughout Suzume (Sun Ra makes an appearance on “Where’s the Sun in Berlin). Lamotta seems clear on the direction of her sound and Suzume is an immersive, artistic experience—each song flawlessly flows into the next. Suzume is a delightful deep dive into Lamotta’s experiences and influences and is one to add to your collection.

Adore, the latest album from Numenorean, is a crossover effort through and through. In some aspects, it’s a love letter to rock and metal fandom; across these ten songs — the nearly nine-minute title track, in particular — the Canadian band conjure vivid memories of various greats: You get the romantic sweep of the Cure, the grungy melodicism of Smashing Pumpkins, the blackened brooding of Deafheaven, and the arena appeal of Gojira, all in one. Not that nostalgia’s their lodestar; as on past albums, Numenorean treat the element of surprise as their own true north, enabling numerous dynamic feats in the process (not to mention keeping the pace smooth, which is absolutely essential for anything ’gazy). I’m not one for spoilers, album-related or otherwise, so let me just say this: in this band’s world, the possibilities are as endless as they are miserable.

For the last 22 years(!), Arizona’s Matt Rendon has been writing songs that pair the ragged garage aesthetic of groups like The Sonics with the psychedelic power pop of The Soft Boys, and while the number of other artists who have attempted the same thing is by no means small, few of them have cranked out as many back-to-back bangers as Rendon. He’s so good at this formula—take a small army of revved-up guitars, add backing harmonies, play loud—that even his weaker songs work their way into your bloodstream. And there aren’t many weak songs on No Exit, the first Resonars record in six years and one that proves his talent for ruthlessly sweet guitar-pop remains undimmed. Though previous Resonars records were primarily all Rendon, on every instrument, on No Exit, he recruits friends and members of the Resonars live band to assist, resulting in songs that feel freer and looser and more potent, as opposed to the snapped-to-grid feel of some of the Rendon-only albums. “Days Fade Away” sounds like The Monkees meets The Creation, surrounded by a circular guitar lead and a vocal line that bounces across each syllable; “Dull Today” is pure Merseybeat melancholy, with vocal line that spills down like a waterfall, and “The Man Who Does Nothing” wastes about six seconds before erecting its crystal tower of vocal harmonies. It’s tempting to read the album’s title as a wry joke—in the play of the same name, three characters are locked in a room they can’t leave. Rendon, too, has been “locked in a room,” as it were, visiting and revisiting the same sonic touchstones since he first started writing songs. But an apter afterlife metaphor for Rendon is not Sartre, but Russian Doll. He may be returning to the same thing over and over, but he gets better and better and better at it every time.

A 21-track compilation from Pittsburgh label Crafted Sounds makes a solid case for the City of Bridges as a place where young weirdos of all genre-inclinations can thrive, even while complaining about how all the “cool” places are closing down as Short Fictions do on cheeky lead-in track  “Prologue: Living in Places Like These Can Be Bad for Your Health (Can’t Live Here Anymore).” What stands out on Bridges is how the diversity of sounds—everything from shimmery synthpop (Soft Gondola) to 90s grunge (Sluggs) to mathy emo to tender indiepop (Flower Crown) to hard psych (Bat Zuppel) to scary-silly electro (Swampwalk) finds a home here—feel cohesive and of a piece. Bridges plays like a document of local scene made up of supportive friends who go to the same house shows every weekend and play in each other’s bands. It doesn’t just make you want to hear more, it makes you want to go there, too.

One of my all-time favorite guides published here at the Daily is Patrick St. Michel’s primer on Japan’s subversive “kawaii” scene, led by Snail’s House, Yunomi and others, trafficking in an uncanny combo of grotesque electronica and adorable, cuddly imagery. At first listen, Vancouver’s Terrifying Girls’ High School don’t seem to fit that label. The four-piece, led by Kitty on Fire Records mastermind Henrietta Lockhart, play sassy screamo ragers, as opposed to sparkling synth jams. Nevertheless, the songs on their debut album Spooky Girls’ Gymnasium (which bear endearingly-cheeky titles like “Death and Softbois” and “Sugoi Knee Weavers”) share the same, paradoxical end goal, hammered home by the anime-inspired album art: It’s a musical celebration of beauty at its ugliest, which is to say its whole essence.  Take a cut like “Teresa of the Faint Smile:” Lockhart’s raspy screams jut in and out of the twitchy verses with graceful precision, building up momentum for an ebullient, bleeding-heart chorus that’d make the Blood Brothers swoon. Or “Beach Town Chillzone,” a sass-core tantrum mid-way through the record, punctuated by background chants that could come from the pipes of a murderous head cheerleader. They’re killer, but also kind of cute — and the same goes for the rest of this excellent, intriguing debut.

A recent Bandcamp tag surfing session turned up a diamond in the form of Vivienne Styg’s Rose of Texas EP: an awesome set of twangy post-punk songs that sound like Vital Idles and the Feelies drowning their wiry neurosis in cheap-o beer and Roky Erickson records on a hot and deathly still summer day.  “Rose of Texas/ Rows of exes/ Rose of…Texas,” mutters lead singer Bex (the band members lists only their first names on the EP’s album page) on the title track, her reverbed vocals and halting echolalia drifting confidently over the band’s skittering rhythms. Like the great minimalist post-punks before them, Vivienne Styg rely on cadence as much as melody to propel their songs forward. Like the great Texas rock bands before them, there’s a 60s garage band heart thumping righteously beneath the group’s hazy insouciance. Vivienne Styg doesn’t maintain any social media presence and search queries only turned up assorted show listings, so all I know about the group is that they’re from Houston, they recorded Rose of Texas in August of 2018 and released it the same month, and haven’t uploaded anything since. The band themselves reveal only that “she is the devilish heat/Oh Vivienne” (“Hellhound”) but the 7 songs on Rose of Texas are so perfectly executed that Vivienne Styg could remain a mystery forever and it would do nothing to diminish their accomplishment here. Might even make it better.