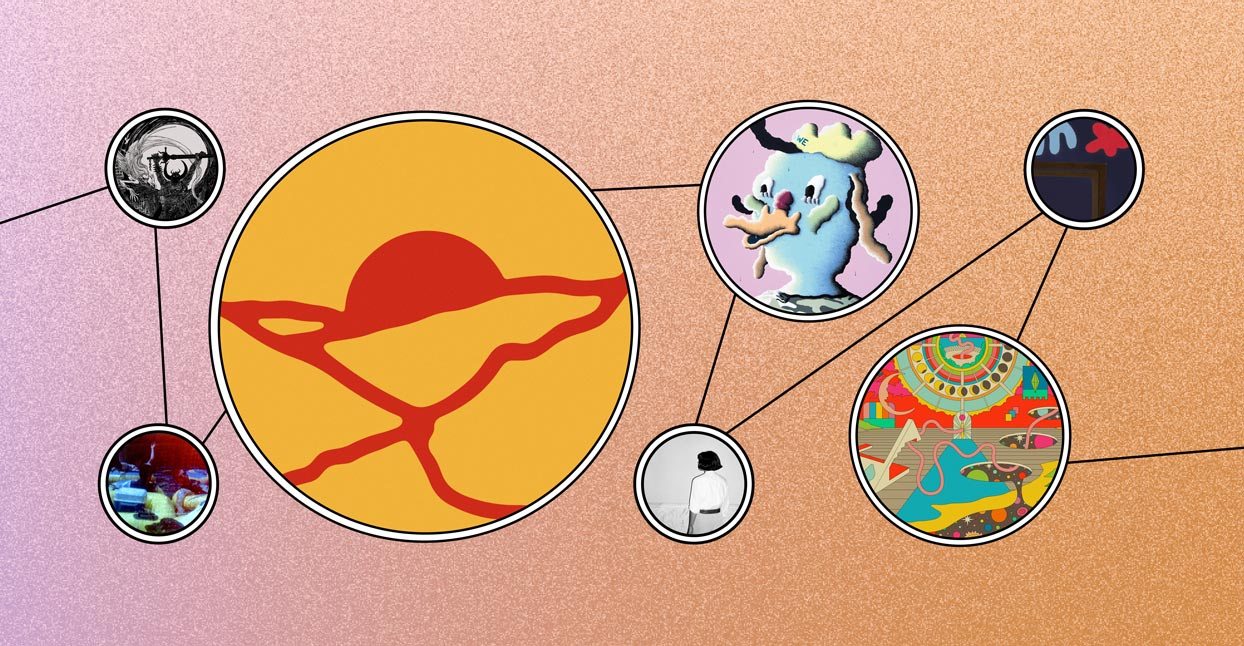 “Guitar baby/ You stumbled right/ Into the blinding light,” sings Shana Cleveland on “Face of the Sun,” the lead single from new solo record, Night of the Worm Moon. She could be singing about herself—as the leader of indie surf luminaries La Luz, Cleveland is certainly a “guitar baby” who has found herself in quite the spotlight—but, at the same time, she could very well not be. Tracing Cleveland’s musical oeuvre reveals an artist edging ever deeper into the liminal spaces where people, feelings, and places become nebulous and indistinct, and that extends to Cleveland herself. On Night of the Worm Moon, she breaks free from the material world completely via a mellow set of meditative sci-fi lullabies that rank among the most haunted recordings of Cleveland’s career. But what anchors Night isn’t just Cleveland’s accomplished musicianship (and that, it must be said, of the band she has assembled for this release, which includes Will Sprott of Shannon and the Clams, ex-La Luz bassist Abbey Blackwell, and Olie Eshelman on heartbreakingly tender pedal steel), but how she keenly excavates wisdom from weirdness. On the spooky title track Cleveland imagines herself as a phantom who’s “always been here stuck inside the walls…you never noticed me at all” but resolves the chorus with a curiously corporeal assertion: “I get what I deserve/ Putting my body first.” Ghosts with bodies, planets without galaxies, loved ones in other realms, and fireballs streaking across the sky: these are the psychedelic signifiers, but what is signified over and over on Night of the Worm Moon is a constant search for emotional truth in a world that will never—can never—make sense.

Noise rock and new age are generally situated as polar opposites where sound, aesthetics, and intended audiences are concerned: grease-bat hooligans rampaging on one side, Enya acolytes chillaxing on the other. But every now and then, we get a mind-boggling musical mutation which — just like black lobsters, chimeric plants, and killer viruses — reminds us that anything is possible.

Active Listening: Light On Earth, the fantastic new album from Philadelphia quartet Empath, is one such remarkable specimen. Verdant in mood but aggressive in execution, its songs could be best described as “flower punk,” with an pointed emphasis on the former throughout. Songs like “Redeo Fever” and (ahem!) “Roses That Cry,” have them cross-pollinating hyper-compressed noise collages with soothing, dreamy psychedelia at a breakneck pace, while the synth-spiked “Heaven” sounds like an early Broken Social Scene single being choked by overgrowth. Call it bucolic brutality.

The aforementioned new-age connection isn’t reflected in the songs themselves — no pan flutes or whale sounds here — but rather in Empath’s mystic, naturalist approach to their craft. (There’s also the band’s pre-standing fascination with auras, plants, and astrology, but I digress). “I rely a lot on balance—if there’s too much noise you’ve gotta have a chill moment,” Singer and guitarist Catherine Elicson recently told Pitchfork. “Sometimes I see a band and think it would be cooler if they got quiet just for a second.” Go with the flow, and let things grow: that, right there, is a smart way to go.

Somebody forgot to tell German label Erste Theke Tontraeger that rock is dead because they keep putting out guitar-based bangers that deserve at least 50,000 more listeners than they’re currently getting. Do your part and get acquainted with the label’s latest release, the staggeringly good self-titled debut from Endless Column. A Chicago band that’s been knocking around since 2010, Endless Column’s sound calls back to the grittier bands of the short-lived Paisley Underground scene of the early 1980s: a keyed-up mish-mush of punk rock rowdiness and Odyssey and Oracle-style song craft that is often folded into power pop but remains a little too ragged for that genre’s lacquered mores. Endless Column have the ragged part down, running wildly through 10 tracks in just 29 minutes, but they’re also got the songs, and what sells this shiny nugget is the way the band finds a way to twist their wiry mess of rough-and-tumble, crunched-up electric guitars into hooks as expansive as Lake Michigan and as bright as the California sun.

Between Pensees Nocturnes‘ carnivalesque polka-death, Traveler‘s space-age thrash, and Véhémence‘s medieval-inspired black metal, 2019’s first quarter was almost solely dominated by high concepts, and rightly so. By diving deep into their chosen themes with such wrathful enthusiasm, these bands ensured memorable, if deeply-unsettling, bouts of escapism, more of which we’ll hopefully get to experience by year’s end. Nothing against mingling with killer clowns, murderous robots, and dungeon-dwelling nasties, of course, but all that heavy high fantasy can leave me longing for a faceplant on familiar terra firma: just batshit drums, swampy bass, rancid guitars, and hell-bent vocals, no fixins’ necessary. That’s just what we get on the eponymous debut by Isotope, a Bay Area hardcore outfit featuring members of Stormcrow, Crimson Scarlet, Midnight Brain, and more. (As if that resume wasn’t enough introductory evidence of their cred, the full-length arrives via Carbonized Records, run by Chad Gailey of acclaimed Oakland band Necrot). It’s a crushing effort through and through that brings various flavors of hardcore to a rapid boil — Swedish crust, Tokyo stomp, Bay Area grind, even a dash of black n’ roll — only to slosh that noxious stew directly straight from the burner, directly onto your face. It’s short, it’s simple, and it’s probably my favorite metal album of the year so far. A little carnal satisfaction? I don’t mind if I fucking do.

Tiana Khasi’s Meghalaya EP is a divine offering. The Brisbane-based singer has followed up her “Nuketown” single with a stunning debut seven song project. Khasi’s silvery voice shines on the jazzy titular album opener, “Meghalaya”. “Up into the hills, I run. Oh, waterfalls where I come from,” Khasi sings as she sets up the overarching creative theme for the project. “Meghalaya’ is both geographic and spiritual. It’s a place I creatively resort to seeking affirmation of my identity and for true holistic inspiration,” Khasi says of her EP title. Elsewhere, on “They Call Me,” Khasi pays tribute to important women throughout history over a crisp, funky production. Other standouts include the soulful “Bitterness” in which Khasi acutely harmonizes, “I’m bigger than this petty shit, so I quit.” Previously released single, “Nuketown” is deceptively sweet sounding neo-soul tune about betrayal. Khasi is an exciting new voice and Meghalaya is a fine introduction into her world.

A collaboration between L.A.-based rapper Pyramid Vritra (one of Odd Future’s original members) and U.K. producer Wilma Archer, Burd sounds remarkably seamless. Archer’s instrumental palette includes looped gospel vocals, soaring strings, warm horns, sparkling guitars, and airy synths—perfect springtime ambience, and an able setting and foil for Vritra’s rolling flow and realist lyrics. Whether the tracks are developed, three-to-five-minute pop-length pieces or little snippets, they each feel like complete worlds, in which Vritra builds out introspective observations about ever-relevant topics like the constant noise of digital-age socialization (“Harness”), the violence of racial profiling (“Targets & Digits”), and the vulnerability of intimacy (“The Hill”). There is pain and difficulty here, obviously, but there is also gentleness, and need, and care. This is one of those blessed partnerships where both artists’ unique sounds are enhanced by the other, and where their blend simultaneously creates something fresh.

The Last Place by the Los Angeles group Army Navy was released eight years ago, but it sounds no less radiant today than it did back then. Too often power pop has a tendency to sink into sameness, but Army Navy follow the unwritten rule—I call it “The Teenage Fanclub Rule”—that says that it’s not enough to just have harmonies, you have to have songs. And The Last Place has songs for days; a rollercoaster recounting of a doomed love affair, the group yokes genuinely heartbreaking lyrics to melodies that achieve liftoff immediately and remain airborne through the length of each song. “The Long Goodbye” opens with a big acoustic guitar strum, immediately followed by Justin Kennedy’s honey-sweet tenor; he tiptoes through the verses, but in the chorus, the whole thing goes off like fireworks, big and high-arcing and bursting with color and light. “Ode to Janice Melt” is irresistibly jittery, a pogo-stick bassline and bubblegum-pop handclap rhythm. Records like this were designed for blasting into the summer afternoon, windows open, fan on. The weather’s warming up; you know what to do.