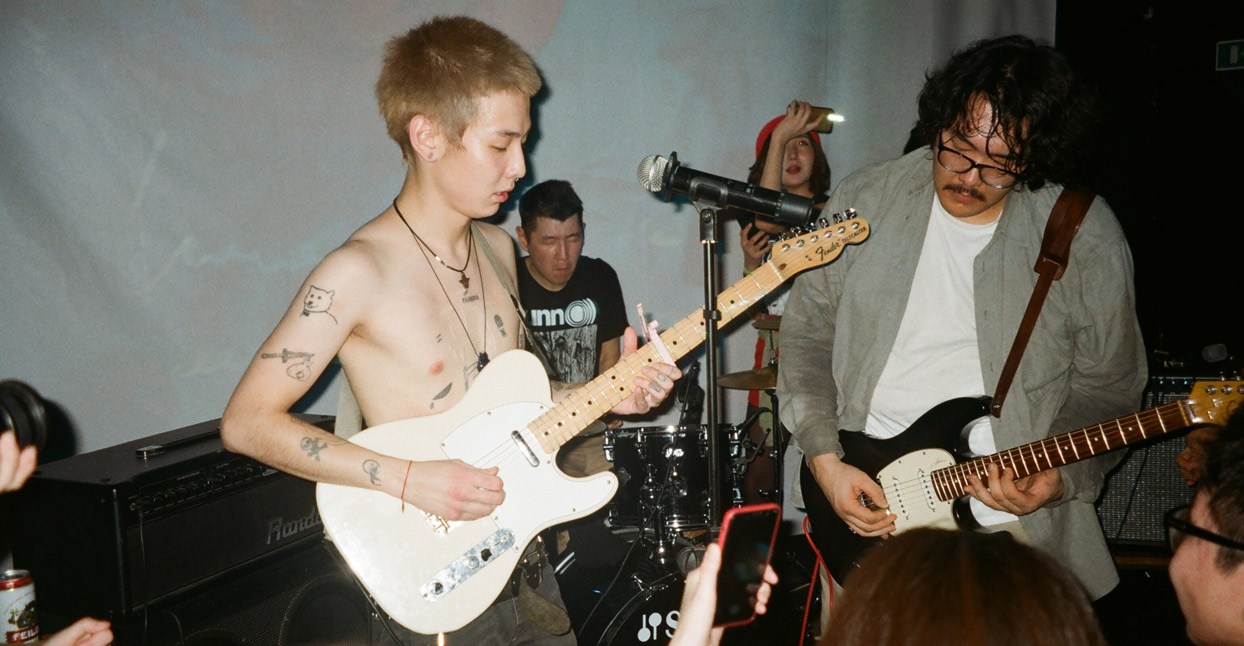 “Life is hard here,” confesses Aleksandr Ivanov, one of the most active members of the Yakutsk, Russia punk scene. “Summers are airless and dusty, while winters are dark, foggy and last about eight months. I know it sounds bad, but I love this city. It’s the only place where I can feel at home.”

Yakutsk is the capital of Sakha-Yakutia, the largest Russian federal subject—the region spans three time zones, with a total area comparable to that of India. One of the most remote and impervious places on earth, Yakutsk proper is known as one of the coldest cities in the world—and yet, it also houses a substantial and heterogeneous punk scene. There’s the wild hypnotic punk of Crispy Newspaper, the unbridled hardcore of Katiny Slezki, the raw punk of Шарм сс (Charm ss), the synth-driven post-punk of Философия (Filosofija), the heartfelt and danceable emo of Имя твоей бывшей (Imja tvoej byvshej), and many more. And there’s Ivanov’s current band, Oblaka, whose HARD-CORE TAPE offers cacophonous dark crust punk with frightful, reverb-heavy vocals that sometimes resemble a dog’s harsh bark.

Most of these groups can be found on the Bandcamp page of юность севера (“Youth of the North”). “It’s not a label nor a job,” explains Anatoly Chirayev, who started the project back in 2014. “It’s more like a small community of friends. We just do what we like.” Over the past four years, he has managed to merge his passion for recording with his passion for spreading the word about Yakutian bands. He regularly uploads demos and albums by local bands, and also offers live recordings that capture the energetic atmosphere of Yakutsk DIY shows. In 2018 alone the collective has uploaded 13 different releases to Bandcamp—including an intense and psychedelic live recording of CS, the Yakutian answer to krautrock, a tough hardcore EP by Gody, and a raw punk demo by the newest band in town, Харакири Из Окна (Harakiri Iz Okna), containing such realist lyrics as: “Minus fifty degrees / I can’t feel my legs.”

While shows of local bands alone can often have crowds as big as 300 people, bands coming from outside the republic remain special attractions. “Shows here are pretty crowded,” observes Chirayev, who used to play the drums in Шарм сс and now plays in Crispy Newspaper and CS. “There are a lot of young people, but older people are also not going anywhere yet. We want to create a friendly atmosphere overall.”

That these events are so popular is particularly impressive, given how dramatically difficult it is to reach Yakutsk to begin with. No direct railways to the town exist. The closest highway sits on the opposite shore of the vast Lena River, which can only be traversed at select points, either by ferry in the summer, or by car in the winter (provided the ice is thick enough to support traffic). Despite these difficulties, heavy groups from near and far go out of their way to play shows in this desolate town. Recent years have seen shows from Sete Star Sept, a noisy grindcore band from Japan, and Kalashnikov Collective, a self-described “romantic punk” outfit from Italy; the latter band took a 12-hour flight from Murmansk to play a single show in Yakutsk, as a deviation from the route of their Russian tour in 2015.

“No one really comes to Yakutsk, especially not punk and rock bands,” says Dmitry Egorov, who plays guitar in Crispy Newspaper. “In this terrible isolation, kids entertain themselves in different ways and music is one of them. It’s an escape from boredom. Every year I think that punks are going to disappear, but there [are] more and more of them.” He considers himself one of the oldern punks in town (he’s 37), and his first encounter with punk culture dates back to the Soviet period: “I remember once, in my childhood, I saw a punk walking on the street. He was blasting music from a tape recorder while rubbing his shoes loudly against the asphalt to make passersby angry,” he recalls. “I was both scared and inspired by such behavior.” Even though he got actively involved in the local scene only in the late aughts, he went to his first punk and death metal shows in Yakutsk in the 1990s, when the Yakutian underground scene was already starting to bloom.

Through another Bandcamp-based project called Sakha Rare Punk, Anatoly Chirayev tries to make sense of those years, collecting and cataloging all the punk-related albums recorded in Sakha-Yakutia starting from the ’90s. His discoveries range from the visceral punk of Нейтральный Автопилот (Nejtral’nyj Avtopilot) and the lo-fi indie of Хоббит Убитый Йодом (Hobbit Ubityj Jodom) to the metallic hardcore of Mortemirus and the youthful punk rock of Всенаоборот (Vsenaoborot). Some of these bands have a cult following in Yakutsk, but they remain obscure to most punk fans even in the rest of Russia.

Seeing how hard it always was for Yakutian artists to be heard out of Sakha-Yakutia, current bands would have probably faced the same destiny if not for the possibilities created by the digital era. “We have a lot of listeners in Central Russia,” Chirayev tells me, “but we aren’t really in touch with bands from outside of our republic. It all ended with a ‘Thanks for the add’ during the Myspace era. But thanks to Bandcamp, we get a lot of nice comments and sometimes a couple of dollars. It’s really cool.”

Here is a small selection of some of the most interesting acts emerging from the Yakutsk punk scene over the past few years.

The coldest city on earth had to have at least one band playing emo. Имя твоей бывшей (“your ex’s name” in English) play a distinctive mix of emo and pop-punk that is at times reminiscent of American acts such as Dowsing or Dads. On their latest EP Нарисован, Тут Же Стертый, twinkly guitars spin atop powerful riffs and danceable rhythms. Charming vocals, in Russian, deliver anthemic hooks so warm that they could melt the thick blanket of ice that covers the city streets for most of the year. The second track “Адаптация” is a real highlight, a perfect emo summer hit with a heartening video shot on the band’s tour with Katiny Slezki. In September 2018, the two groups played a series of shows in Moscow, Saint Petersburg, Veliky Novgorod, and Minsk (Belarus), carrying the Yakutsk new wave of punk more than 5000 miles away from home.

Katiny Slezki play a style of raw punk popular in the world at large these days, the sort that might end up on the roster of La Vida Es Un Mus or Static Shock. The greatest quality of this Yakutsk four-piece is in the way they manage to sound provocative even when you don’t understand a single word their singer Ekaterina Katina screams. The first song off their latest EP provides an effective example of that: while a guitar riff hurtles over furious hardcore drumming, her voice reverberates as she repeatedly screams the word “мода” (“fashion”) in the same way she might mock a spoiled brat.

“It’s easier to explain yourself in your native language,” Anatoly Chirayev says, on why his band Crispy Newspaper sing in Sakha rather than in Russian. Sakha is the the native language of the Sakha-Yakutia republic, a Turkic language written in Cyrillic script and spoken by less than 500,000 people. “Our language is dying out,” he adds, “and performing in Sakha with our band has sacral meaning for us.” Crispy Newspaper play impertinent ‘80s-style punk with guitar solos so fast they’re almost flammable, and the choice to sing in Sakha fits their formula perfectly. On “Эн олоҕуҥ” (“Your life” in English), the fourth track off the band’s debut album Судургу Тыллар, the words spat by frontman Igor Tsoy rhythmically merge with a fast, reckless beat—his vocals becoming one with the kick drum snare. The final result is a great album of unbridled punk as hypnotic as it is aggressive.

When Kalashnikov Collective played with Шарм сс in Yakutsk, the former described the latter’s set as a “blind and uncoordinated punk attack.” Шарм сс disbanded in 2015 after releasing two demos, a floppy disk limited to 30 copies, a couple EPs, and two splits (one with Yakutian bands, the other with Indonesian punk band Milisi Kecoa) for a total discography length of…around 25 minutes. Their fury is visceral: dense guitar riffs ripple over throbbing drums as the acrid vocals spill forth with virulent force, as if the singer is vomiting straight poison. It’s as raw as it sounds.

In December 2016, with an outside temperature of around -43°C (-45°F), Притон (so named for a Russian word to describe dens where drug users and criminals gather) locked themselves inside the studio to record a self-titled album with a Tascam CC-222 tape recorder. The extremely lo-fi quality of the recordings enhances the urgency of their rickety yet hearty garage punk. Underneath a coarse blanket of booming drums and distorted guitars beats the genuine, rash heart of the Yakutian punk scene. If that’s too much, try the more innocuously mixed live recordings of the band featured by Youth of the North, which prove not only that Притон are one of the most active bands in Yakutsk, but that their shows might be one of the highlights of the underground nightlife of the city.