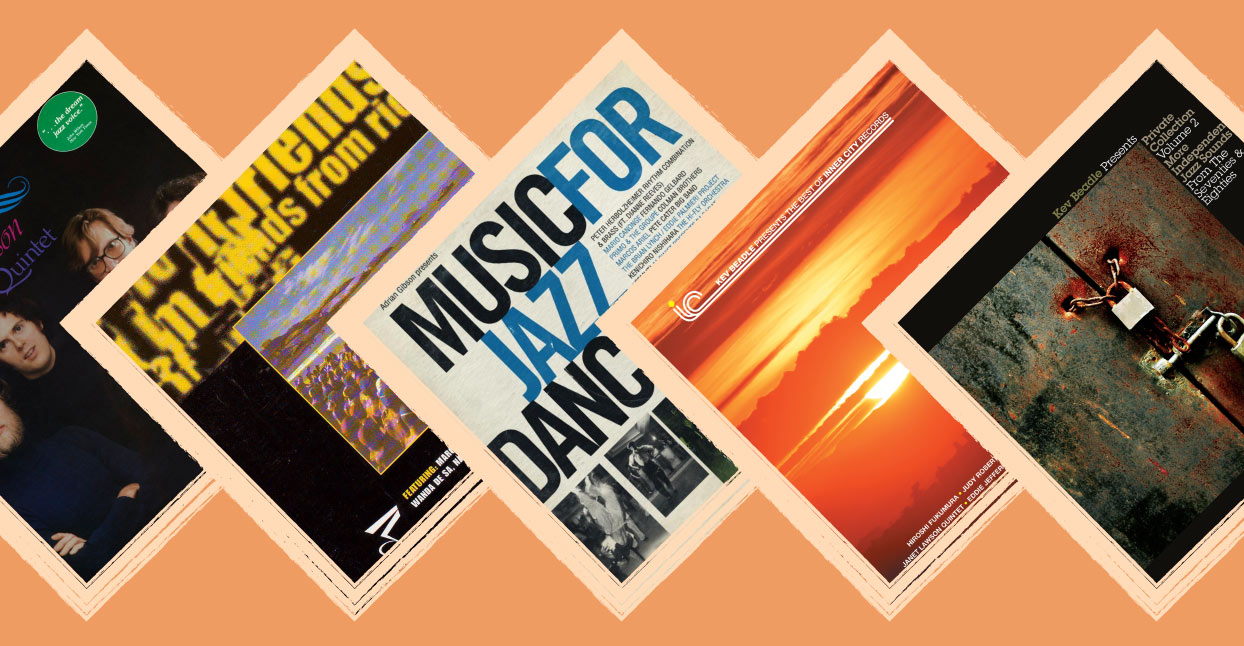 “The dancers of Britain proved that you can dance to modern jazz.” That’s what author Robert Farris Thompson wrote in the foreword to Mark “Snowboy” Cotgrove’s 2009 book, From Jazz Funk & Fusion to Acid Jazz: The History of The UK Jazz Dance Scene. “They were not copying Black America but minting something new. This was jazz dance passed through new minds and strong bodies.”

Thompson, a U.S.-based cultural historian, had witnessed his first U.K. jazz dance event at Snowboy’s Hi-Hat sessions and was blown away by what he had seen. “He was DJing in the corner challenging the dancers,” he enthused. “Responding to all these young men and women on the floor unleashed lightning-fast footwork.”

The roots of jazz dance can be traced back to the mid- to late-1970s, when working-class teenagers across the U.K. created their own fanatical scene around the jazz-funk, fusion, and Brazilian/Latin hybrids they discovered. Like Northern Soul before it, the scene revolved around serious dancers obsessing over records made by people who were unaware of their effect in clubs thousands of miles away. The best dancers honed their floorwork at clubs like Rafters in Manchester, Crackers in London, and Chaplins in Birmingham. By the early 1980s, new styles of dance had emerged across the U.K. as DJs dug deeper for ever more obscure records.

At Berlin in Manchester, where Blackpool Mecca and Rafters DJ Colin Curtis and his partner Hewan Clarke played a heavy mix of rare jazz fusion from labels like Muse, The Jazz Defektors created a free flowing balletic style of dancing rooted in the traditions of the 1940s “flash dancing” team Nicholas Brothers. A world away from this graceful style was the so-called “fusion” dancing at The Electric Ballroom in London. With their speedy footwork and furious spins, these highly competitive dancers favored the heavier end of jazz fusion played by DJ Paul Murphy.

The influx of young dancers (some just 14 years old), who joined veterans from Crackers and other clubs like The Horseshoe, saw the music become even harder and faster. “The dark, heavy, and hard fusion that Murphy was playing, plus with the dancing and fashion unique in that room—think tight stretch jeans split down the sides with low cut patent leather shoes, legwarmers and rolled up woollen hats—it was virtually a scene of its own,” Snowboy recalls.

Made famous by the professional dance troupe IDJ, these original footworkers were immortalized in The Jazz Room, filmed by Dick Jewell between 1984 and 1986. It was during this period that a young Gilles Peterson, DJ at London’s other home of jazz dance The Wag Club, took over from Paul Murphy. And it was through Peterson’s subsequent club night Talkin’ Loud And Sayin’ Something at Dingwalls that jazz dance would finally go global. Opening in 1987, Dingwalls inspired other nights across the world against the backdrop of acid jazz—from Giant Step in New York to The Fez in Bari, Italy.

More than 30 years since its heyday, jazz dance continues to draw in new dancers to watch and learn from the originals—from Perry Louis’s Shiftless Shuffle in London to regular sessions at Kyoto Jazz Massive’s Tokyo club The Jazz Room. Here, we look at some of the anthems from the scene that continue to light up floors across the world.

The Janet Lawson Quintet
“So High”

The Baltimore-born singer recorded this U.K. jazz dance staple in 1981 on her eponymous debut with the Janet Lawson Quintet on Inner City Records. It was one of the greatest jazz dance vocal tracks, but Lawson only discovered that it was such a hit in the 1990s. “That was what was so incredible, that this was a dance piece. It never entered my mind,” Lawson told Electric Ballroom regular Seymour Nurse in his essential blog The Bottom End. For dancers who came of age in the late ‘80s, the track will forever be associated with DJs Gilles Peterson and Patrick Forge. After appearing on Peterson’s famous Jazz Juice Vol. 5 compilation from 1987, “So High” became one the bona fide anthems of the most famous U.K. jazz dance clubs, Talkin’ Loud And Sayin’ Something at Dingwalls. The scat singer was also responsible for other jazz dance tunes “Dindi” and “Dreams Can Be.”

By the mid-1970s, jazz fusion divided opinions even more than the arrival of free jazz in the previous decade. It would take a group of teenage dancers from the U.K. to really tap into the music and give it new meaning. Originally released on The Jeff Lorber Fusion LP Soft Space, “The Samba,” which featured Chick Corea, became a battle tune for jazz dancers at clubs up and down the U.K.—from Rafters in Manchester to Chaplins in Birmingham. It was just one of many jazz-fusion records introduced to DJs on the scene in the early ‘80s by Paul Murphy through his Fusions record shop in London’s Exmouth Market. The keyboardist’s “Chinese Medicinal Herbs” and “Proteus” tracks have equal status for the dancers.

In the mid ’80s, DJs like Chris Bangs and Gilles Peterson became known for what they called “Dodgy Bossas,” essentially slightly kitsch Brazilian records (by homegrown and American artists) that crossed over to mainstream audiences in the ’60s. Tracks like Astrud Gilberto’s “(Take me to) Aruanda” and Sergio Mendes & Brasil ’66 “Day Tripper” fit the bill, as did the English language version of “Os Grilos.” The original instrumental of “Os Grilos” was co-written by Marcos Valle and his brother Paulo Sérgio and appeared on the 1967 Braziliance! at the height of the bossa nova movement. But it was the English language vocal version taken from the LP Samba ’68 that U.K. DJs favored. Far Out label boss Joe Davis first heard the track played by Gilles Peterson at a mid ‘80s Sunday session at the Belvedere Arms in Richmond, South West London. Davis went on to release a host of Valle’s albums that are equally essential. Pure bossa brilliance to brighten up any dancefloor.

“These tunes first got an airing outside of their home states at those legendary club sessions, where the music changed from its earlier emphasis on hard-bop and bossa to modal, spiritual and ‘cosmic’ jazz.” So went the sleeve notes to Private Collection Vol. 2, compiled by London DJ Kev Beadle. As the label notes explain: “It’s fair to say few of their creators probably ever imagined they were making dancefloor hits.” This was certainly the case when saxophonist Byron Morris and his Unity collective entered Minot Sound Studios in 1974 to record the LP Blow Thru Your Mind. Morris had previously played with both Rahsaan Roland Kirk and Ornette Coleman, and formed Unity as a counterpart to New York label Strata-East. The result was a seriously radical jazz LP that opened with the 12-minute spiritual free jazz epic “Kitty Bey,” one of the heaviest of all jazz dance tracks. Also check the glorious “Sun Shower” from the LP Vibrations, Themes & Serenades, another jazz dance anthem—from the Ballroom to Berlin.

One of the true pioneers of jazz fusion, keyboardist Barry Miles had recorded the LP Syncretic Compositions: A Program Of Modern American Improvisational Music back in 1966. “During the ’60s, Princeton University had a pretty substantial electronic music department which included early work with computer generated music and a synthesizer developed by Don Buchla. I had no problem with the mixing of acoustic and electronic music,” Miles told Seymour Nurse. Making full use of his RMI Electra piano in 1970, he recorded his prescient self-titled LP for Poppy Music. It included “Hijack,” which became one of the earliest recorded jazz fusion tracks to cross over to U.K. dance floors. What really distinguishes the track is its slow mournful opening, which gave the dancers a few seconds to recover, before it breaks into one of the most uplifting pieces of jazz fusion. Miles is known for some of the most powerful fusion tracks on the scene, including “Magic Theatre,” “Sky Train,” and “White Heat,” recorded with his band Silverlight.

Chicago-born jazz singer and keyboardist Judy Roberts recorded her self-titled debut album in 1979 for Inner City, home to so many future jazz dance classics. It opened with “Never Was Love,” one of the finest vocal jazz dance tracks to grace U.K. dancefloors. This breezy, Latin-infused jazz dancer was more suited to the graceful balletic style of crews like the Jazz Defektors; it was such a classy jazz dance tune that it became one of the few slower records played at the Ballroom. “Never Was Love” was featured on Gilles Peterson’s influential Jazz Juice 7, sounding perfect alongside two other great jazz dance vocal tracks—Cybill Shepherd’s “Triste” and Flora Purim’s “From The Lonely Afternoon.” Also worth searching out is Roberts’s 1981 LP for Inner City, Nights in Brazil, which included the jazz dancer “Olé.”

Brazilian music was a feature on U.K. dancefloors as early as the mid ‘70s, at clubs like The Goldmine and Lacy Lady in Essex (home of the jazz funk scene). In the mid ‘80s, DJs like Gilles Peterson and Colin Curtis were digging deeper to uncover records like Hermeto Pascoal’s “Bebê,” Marcos Valle’s “Os Grilos (Crickets Sing for Ana Maria),” and Milton Nascimento’s “Para Lennon e McCartney.” Thanks to a series of mid ‘90s compilations like Blue Brazil (Blue Note In A Latin Groove) and Brazilika on Talkin’ Loud, these tracks were now available to fans without breaking the bank. This was one of the other essential compilations of the time. Conceived and produced by Far Out label owner Joe Davis as a tribute to the musicians that had first inspired him as an 18-year-old to travel to Brazil, it consisted of new interpretations of what were now dancefloor classics—records like the aforementioned discoveries by Peterson and Curtis, recorded here by a selection of old legends and rising stars of Brazilian music being given new exposure by Far Out.

After the closure of Talkin’ Loud And Sayin’ Something at Dingwalls, one of the most important sessions for London dancers was Messin’ Around. Originally held at London’s Jazz Café, the night was hosted by DJ Adrian Gibson and Perry Louis (Louis also heads the Jazz CoTech Dancers). Alongside Snowboy’s Hi-Hat, Messin’ Around brought new life to the U.K. dance scene with its embracing of new tracks tailor-made for the dancers as well as new discoveries from the crates. Founded in Germany in 2005 by bassist Jerker Kluge and saxophonist Florian Riedl, The Hi-Fly Orchestra recorded “Hi-Fly Stomp” on their Mambo Atomico LP. Other contemporary highlights include Primo & the Groupe’s version of Fred Johnson’s rare vocal jazz track “A Child Runs Free” and Japanese pianist Kenichiro Nishihara’s ‎glorious modal piece “Nebulosa.” For those wanting to taste the London jazz dance scene in all its current glory, head to one of Perry Louis’s monthly Shiftless Shuffle sessions. It goes to provide that nearly four decades since the scene began, U.K. jazz dance is still going strong.