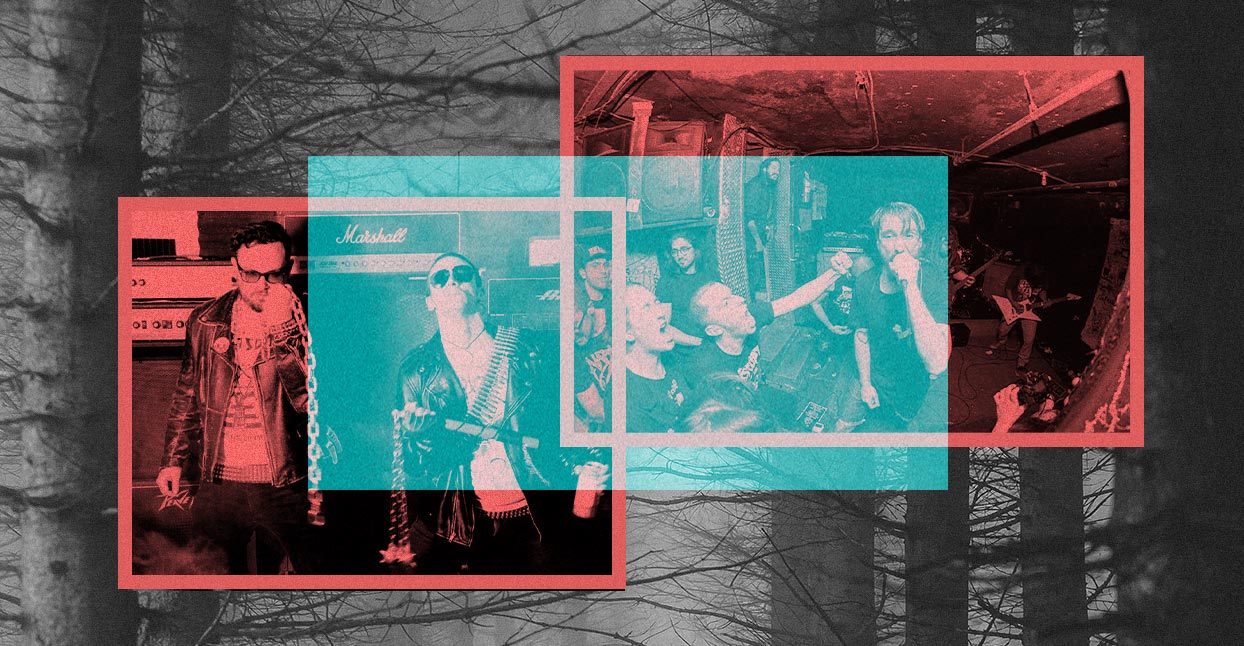 Disrespecting New Jersey (occasionally to one’s peril) has become something of a national pastime, especially for people who occupy the two big metropolitan centers—New York City and Philadelphia—between which much of the Garden State is sandwiched. Whether it’s the unique accents, perceived culinary transgressions, that cursed reality show, or the idiosyncratic slang (shoobie, go home!), Jersey gets a rough shake from those who don’t understand or appreciate its quirks—or who have never seen anything outside the Newark airport. Most of the state is a far cry from the greasy urban blight the Sopranos made famous (though they did bury Paulie Walnuts down in the Pine Barrens nature preserve where I grew up).

Bridge and tunnel jokes aside, the underground metal scene in New Jersey is yet another aspect of the state that has long been left underappreciated. Its place in metal history is typically restricted to ’80s bands like Whiplash and Overkill and 2000s metalcore heroes the Dillinger Escape Plan, Rorschach, and God Forbid (to say nothing of grind gods Discordance Axis and Gridlink). But any local will be quick to point out that a lot has happened in the ensuing decades. NYC and Philly tend to vacuum up a lot of promising musical talent, but the musicians who have elected to build up their local scenes instead of leaving Jersey have created something truly special.

With apologies to my South Jersey brethren, the northern half of the Taylor ham/porkroll divide has been making the most waves lately. New Brunswick is already known for its DIY punk scene, but a great deal of the extreme metal commotion is concentrated in and around Montclair, home of revered DIY spot the Meatlocker. Whether it’s Sunrot’s debilitating noise sludge or Woodland Tomb’s ripping anarchist black metal, Jersey’s metal bonafides are as unfuckwithable as its notoriously, uh, dedicated drivers.

Bayht Lahm may hail from the waterfront city of Perth Amboy, but their focus is purely celestial—cosmic, even, judging by their latest release, Outerbridge Space Grind. Named in part for the imposing bridge that connects Perth (Sl)amboy to Staten Island, the EP is a true study in bridge and tunnel brutality, roaring through four songs of manic, rough-edged grindcore in under six minutes. The duo have both killed time in other equally vicious bands Animals Killing People and Rottenness, but since their inception in 2017, Bayht Lahm have definitely carved out their own nasty little niche in Jersey’s fertile grind scene.

Dutchguts are dirty Jersey DIY lifers. The weed-obsessed sludge punks have been plying their trade around the tri-state area since founder Dan Rivas was fresh out of high school, and now that he’s one of the main folks running the Meatlocker, Dutchguts have become an binding force in the local scene. The band’s hazy, low-slung riffs, understated percussion, and Rivas’s hoarse exhortations are well-suited to grimy basements, but have also landed them on fancier bills with the likes of Eyehategod and Crowbar. For a band like this, adaptability is key, and Dutchguts are in it for the long haul.

Organ Dealer’s death/grind onslaught is DIY to its bones, but the band itself has enjoyed a great deal of success well beyond state lines since they began in 2013. With appearances at legendary extreme metal meetings Maryland Deathfest and Obscene Extreme already notched on their frayed belts, this five-piece wrecking crew have certainly made their mark outside the local scene, but are still fixtures at the Meatlocker. Organ Dealer may have managed to hit that extremely tricky sweet spot between grind chaos and professionalism, but they’re still firmly in touch with their underground roots.

Sunrot is pain, but Sunrot is love, too. The people behind this experimental, confrontational, doom-laced sludge noise project have the biggest hearts in Jersey, but summon forth some of the most terrifying music this side of Cape May. That emotional dichotomy is only part of their appeal, as is the band’s unwavering support for their own local community; even if Sunrot weren’t the nicest humans in the tri-state area, they’d be turning heads with their music, which is as punishing as it is compelling. Sludgy doom can be a tough genre to innovate, but with their additions of otherworldly vocal effects, harsh noise, and sheer cathartic fury, Sunrot have truly wrought something both great and awful.

Vasoconstriction are heavier than a thousand fat sandwiches (and probably just as bad for your arteries). This Montclair, NJ trio grind out an impossibly gnarly cocktail of d-beat, hardcore punk, powerviolence, and good old fashioned grindcore that’s propelled by vocalist Clara Chamorro’s speedy, gravel-throated roars. Formed in 2017, Vasoconstriction have been plugging away at the tri-state live music circuit, and are Meatlocker staples. Each track on their latest EP, Occupation, is more violent than the next, and each track careens over to the next before the blood has time to dry.

Woodland Tomb’s cold, brittle black metal is a bit of an outlier in the doom-and-grind-soaked North Jersey metal pantheon (especially in the ritzy college town of Montclair), but the band’s strident anarchist politics fit well into the scene’s broadly progressive bent. The five-piece black metal outfit have been knocking around since 2015, and their latest self-titled EP shows how much they’re grown. The EP’s four frosty tracks draws in death metal and crust to augment the darkness inherent in their aggressive, sharply melodic songwriting; there’s a faint ’90s Scandi black metal influence lurking amidst the riffs, but Woodland Tomb keep their own message guillotine-sharp. (Fun fact: Woodland Tomb share members with the similarly excellent though sonically different sludge outfit Cowardice.)