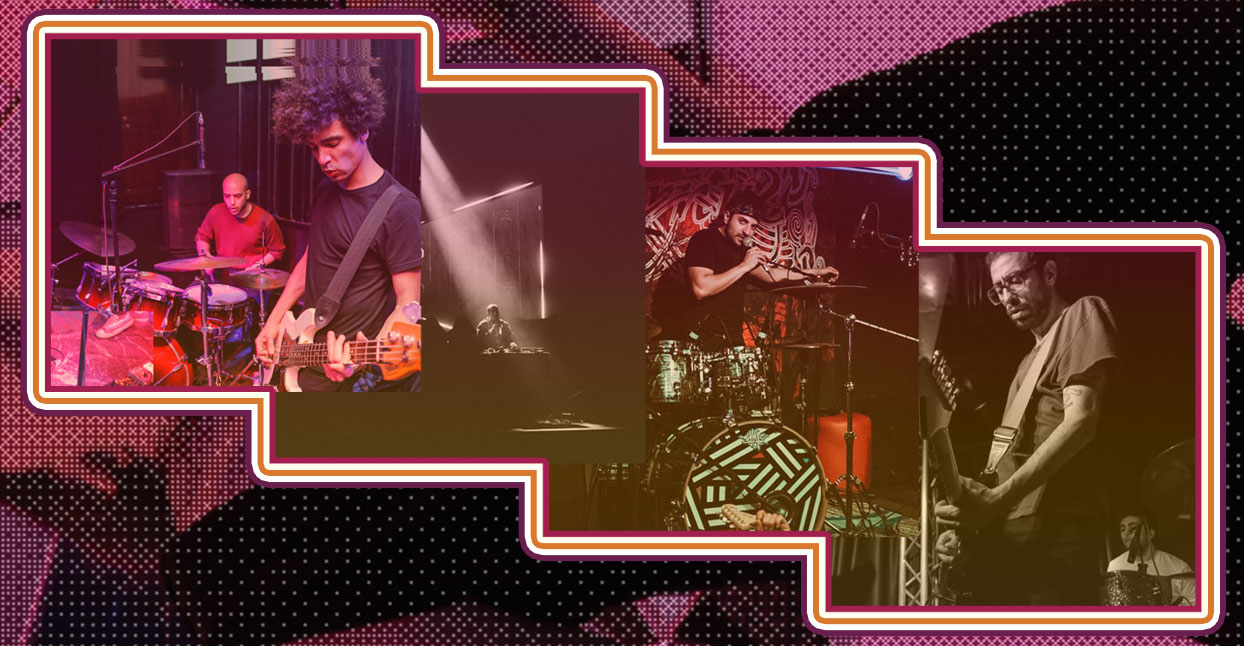 “I remember a distinct shift between bitching that there isn’t really a strong scene in Cairo, to realizing that we are the scene,” says Adham Zidan, a producer and musician based in Egypt’s sprawling capital. Zidan is one of many musicians who has helped build small but thriving scenes across the Middle East in recent years. From the political dancefloor ruminations of Lebanon’s Mashrou’ Leila to the moody guitar atmospheres of Jordan’s El Morabba3 to the genre-bending anthems of Egypt’s Cairokee, the region is home to numerous artists and bands who are setting their own definitions of rock music—drawing from Arabic folk, punk, psych, synthwave, and noise as sources of inspiration.

“In the early days, there were venues where you knew that the music playing there was going to be interesting, so you’d go, not knowing who was playing, and that was special,” Zidan says of the underground scene in Cairo. “The way I look at it, the size and scope of the people doing interesting work here is limited and so there’s not really space for competitiveness or bitterness in the same way you’d find in some other cities. Instead, you have to allow other people’s work to inspire you in one way or another.”

Touring can be difficult for many bands in the region, due to complicated travel restrictions, lengthy application processes, and conflicts in countries like Iraq and Syria. There are also a limited number of record labels and media outlets, making it more challenging to rise to the next level. But institutions like Beirut’s long-running Irtijal Festival and Cairo’s Eka3 platform have made it easier for underground artists to find one another, release their music, and build bridges to Europe and beyond.

“The way it works is that you find yourself automatically plugged into the big underground scene in the region, and becoming friends with most of the people in it, even if they’re not producing similar sounds,” says Khodor Ellaik of the Lebanese post-punk project Kid Fourteen. “Sometimes you have one act from every genre in that pool, and that becomes a scene by itself.”

While iconic singers and composers of the mid 20th century, like Umm Kulthum and Abdel Halim Hafez, are still widely revered, younger listeners have been eager to make their own music. Qais Raja, singer of Jordanian group Albaitil Ashwai, assembled his group after being inspired by bands like El Morabba3 and Autostrad, both of which were formed in the late ‘00s in Jordan’s capital, Amman. “I really liked the idea of [them] actually creating a sound that describes our generation—not our parents’ generation, or our grandparents’,” Raja says. “It was totally Ammani. It was organically from Amman, as a concept.”

Critics and musicians have been careful to draw a line between the cheesy, vaguely condescending “world music” promoted by Western labels, and these regionally-focused strains of fascinating underground sounds. Some are also eager to break away from American and British rock molds—which is one of the reasons why Egyptian musician Youssef Abouzeid stopped singing in English not long after starting his band PanSTARRS. “It feels more real,” he says of singing in Arabic. “It’s not just about my language. With words and music, I just want an honest representation, and the English lyrics didn’t satisfy me.”

Though the scenes aren’t as prominent in the Gulf, countries like Saudi Arabia and the United Arab Emirates also are home to artists eager to push against convention.

“Whenever a local band releases a new album and they host an album launch party, anywhere between 30 and 200 people show up, 20% of them buy a record and T-shirt, and then you never hear from that band again. It really is a sad affair,” writes duo The Losing Party in a Facebook message from their home in Dubai. They’ve been trying a different approach: putting on a series of DIY basement shows dubbed “The Losing Party party,” where indie artists play to small audiences over tea and manakish (fried dough topped with thyme or cheese). “We think what you really need is to build a pulse,” they say. “It’s not about the be-all, end-all album launch party, it’s about embedding yourself into the scene.”

Here’s a look at some of the bands redefining the boundaries of rock in Arabic-speaking parts of the Middle East.

Albaitil Ashwai means “Random House” in Arabic—Raja explains that the word “bait” (meaning “house”) is often used to refer to a family and its lineage, while “ashwai” (“random”) alludes to the band’s wide swath of seemingly disparate influences. It’s all brought together under one roof to create stunningly beautiful Arabic rock. On their debut album Nuun from 2018, gleaming passages of acoustic guitar lead into bracing riffs and potent rock rhythms accented by doumbek drum fills. The lyrics draw deep, full of references to Sufi philosophy and Old Testament mythology, and they also deliver a swaying, shape-shifting cover of “Ya Marakbi” by legendary Nubian singer Ahmed Mounib.

Khodor Ellaik got his start as the snarling frontman of a Cramps-style boogie-punk band dubbed Beirut Scum Society, but he broke out on his own and took the plunge into industrial, post-punk, and noise-pop after striking up a friendship with Dirty Beaches mastermind Alex Zhang Hungtai. Starting as a solo project and now a duo with Karim Shams, Kid Fourteen’s music is a midnight ritual of drum machine beats, pulsing synth arpeggiators, and metallic guitar squall. Ellaik explores youth and masculinity with a deadly croon reminiscent of late, great Suicide frontman Alan Vega.

The album cover of the Bunny Tylers’ 2017 album Chance Meetings shows a guy kicking it back on the hood of an old muscle car at sundown, a fitting translation of how Charbel Haber and Fadi Tabbal drift along on a bed of motorik drum rhythms and atmospheric post-rock soundscapes. For the most part, the duo sound super relaxed. But a simmering tension bubbles up when their beatific synth drones break into stronger riffs, with mumbled lyrics that describe gathering floods, lingering nightmares, and crumbling concrete castles.

This solo project-turned-experimental rock band sounds like it could have drifted into orbit from some distant planet, with synth drones buzzing threateningly over haunting guitar lines and stray ribbons of feedback. Youssef Abouzeid shares existential insights and intimate entreaties in a dispassionate murmur, backed by cranking-and-snapping drum loops. Abouzeid has also charted new territory on his solo effort Captain Solo, and the band is currently making plans to release their long-awaited new album.

Egyptian producer Adham Zidan penned the songs for this enthralling psych-rock project with a full band in mind, but it wasn’t meant to be: he didn’t have time to actually hire any bandmates. Consequently, he performed most of the instruments on Today Is Tomorrow himself, with Magued Nagati filling in on drums. Synthesizers, Mellotron, and innovative guitar licks combine to create a lush and introspective sound reminiscent of Syd Barrett’s solo albums from the late ‘60s and early ‘70s. Zidan transcends urban chaos and modern drudgery by way of memorable lines like: “I’d rather be a monkey / Climbing up the trees / With no worries in my head / But on which banana I will feed.”

A frequent Zidan bandmate and collaborator, and a fellow staple of Cairo’s music scene, Tarkamt’s Cherif El-Masri here conjures up the ideal soundtrack to a bohemian midnight gathering. Despite what the title claims, this isn’t actually a live album; instead, it’s a journey through bone-jarring robo-rock, oceanic power electronics, cursed Hare Krishna chants, and wicked guitar solos. The album culminates in “The Harbinger,” a nine-minute epic that represents the best marriage of punk, krautrock, and occultism this side of the Nile.

With widespread popular demonstrations recently bringing an end to the 20-year rule of president Abdelaziz Bouteflika in Algeria, you might wonder if uncompromising punk bands like Demokhratia will gain a new freedom of expression. Founded in 2007, this crustcore outfit (whose name means “Democrashit”) is known for minute-long bursts of breakneck riffs and breathless screams in the Algerian Arabic dialect. They rally against the concepts of organized religion and nationalism on No Religions-No States, a 2012 split-LP released with Israeli punk band Mondo Gecko.

The leader of this rock colossus from Saudi Arabia, who goes by the nickname Al-Hajjaj the Camel, has wide-ranging tastes; his influences range from Michael Jackson’s “Beat It,” to Survivor’s anthem “Eye of the Tiger,” to regional pioneers such as guitarist Omar Khorshid. He started Sound of Ruby in 1996, achieving a degree of local notariety before briefly disbanding in 2010. Four years later, he and his bandmates reunited to record the furious and fantastic album, Serotonin. The crude album art, hypnotically grimy riffs, and especially Al-Hajjaj’s throaty screams call to mind bands like Flipper and Bleach-era Nirvana, but the group also makes forays into twanging cowpunk and psychedelia.

This mysterious duo issue captivating broadcasts of orbital space-blues from hidden corners of Dubai. As if suspended in zero gravity, guitar riffs and drums stretch and bend like taffy, fuzzy Hendrix licks and whammy-bar bends playing against limber rhythms and muscular fills. For these two, the journey itself takes precedence over the final destination: There’s rarely a hook, never a big catchy chorus, but releases like Breach in Cabin 5 and Ephemeral are full of powerful explosions and heady plateaus.