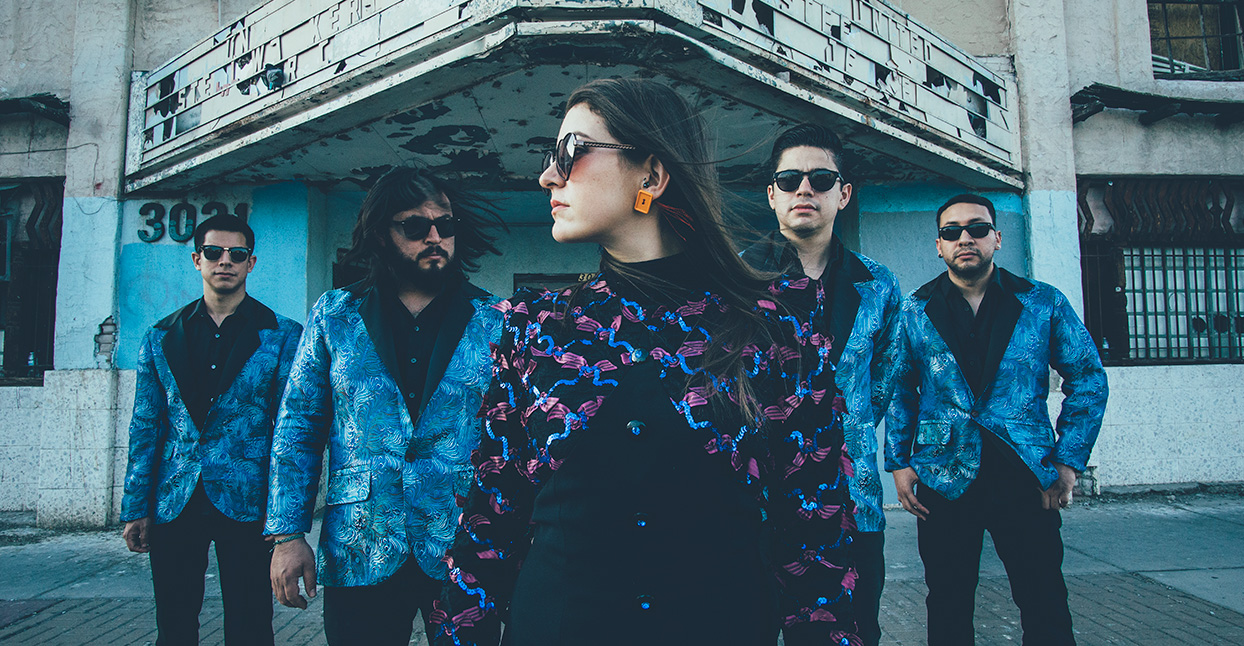 The musical identity of Mexican-rooted Latinx musicians who live on both sides of the Rio Grande sometimes reflects a sentiment expressed by the often-quoted Mexican dictator Porfirio Diaz. who stated in the late 1800’s: “Poor Mexico, so far from God, so close to the United States.”

Creating an identity as expressed in the music becomes a complicated process. as these artists sort out binational, bicultural lives with ties to all sides of a nearly 2000-mile border. These tensions play out musically in a myriad of choices: genre, language choices (Spanish? English? Spanglish? All of the above?), how to relate to the traditional musics of the homeland, battling tequila-and-taco-rife stereotypes, and above all, the movement and migration which is at the heart of their lives.

Today, the Latin alternative music being created by artists from both sides of the Rio Grande evidences that no wall built by anyone can stop the music from flowing freely – no visas or passports needed. Whether north, south or emerging right at the border, here’s a selection of Bandcamp artists whose music has been shaped in different spaces and places across the North American continent.

When Amalia Mondragon was a child, she made fun of the music her parents listened to in the 1980s and ‘90s. Now, as frontwoman of The Chamanas, she takes cues from that same music, building a surreal sound from old Mexican pop ballads and traditional Latin rhythms.

“When we were kids, we listened to that music and we thought it was a drag—’Oh, man, this is like ‘old people’ music!’” Mondragon recalls. “Now that we are older, we appreciate the musicality and art behind that, and so our music provokes a sense of nostalgia.”

The Chamanas—a quintet bordering Tijuana and Ciudad Juárez—is one of several Latin alternative acts shaping music along the Rio Grande, with everything from experimental digi-funk to psychedelic cumbia sharing equal time in the spotlight.

The band is driven by the power of Mondragon’s voice; its name is in Spanglish, because the music is informed by the people who live on both sides of the border. “On the U.S. side we have Fort Bliss, a military base,” Mondragon explains. “And in Juarez, we have a lot of factories, and a lot of people from different parts of Mexico come to the border to work.”

Pumcayó, a quintet from Guadalajara, Mexico, is a folk-rock band founded in 2014 by Federico Diaz de Leon and Saul Figueroa. Both are practicing architects, and they often compose as if they’re creating visual art, or a building. “We think of things like contrasts, dynamics, rhythms, symmetries,” Diaz de Leon says.

Their music has a clear Mexican identity—something that they take seriously and execute carefully, “Or else it becomes cliché, like a Taco Bell kind of thing.” Although their music can be called “roots music,” they are not folk musicians; they explore those sounds from an urban and western perspective. The results are much like the land’s artisanal handicrafts: intricate, textured, and colorful.

Daniel Russo Garrido, better known as Boogat, started his musical career as a French-language rapper based in Montreal. His parents were Latin American intellectuals who met in Canada after fleeing their native lands for primarily political reasons. Boogat’s father is from Paraguay; his mother from Mexico. He spoke Spanish at home, but began creating his music and rhymes in French.

Like many Latin American musicians, Boogat was raised on Cuban and Chilean protest music, the preferred music of Latin American intellectuals. As an adolescent, he discovered pop music via Top 40 radio shows and later, as a skateboarder, he developed a fondness for California punk music.

All of these influences play a part in his three successful French-language albums. In 2013, he began releasing albums completely in Spanish, including El Dorado Sunset and Neo-Reconquista.

Now based in Mexico City, Boogat says that immense metropolis is changing the music he makes. “The cultural perspective changes everything. It’s refreshing to be in a place where Latin music lives without being something exotic.”

Dos Santos Antibeat Orquesta was born in Chicago, which has the largest Mexican population in the U.S. outside of the Southwest and California. The band’s founder, Alex Chavez, is a Mexican-American from Texas. Bassist Jaime Garza Rodriguez is from Mexico; he and Chavez are trained as folkloric Mexican and rock musicians. Drummer Daniel Villarreal Carrillo is from Panama, and has a background in indie rock, jazz and Afrobeat. Percussionist Peter Vale was born in Puerto Rico and raised in Chicago, steeped in salsa and Latin jazz. And Nathan Karagianis, the band’s guitarist, is Greek, and was raised on jazz and soul.

That wide variety of influences allows the band to freely explore a variety of rhythms, all of them rooted in raw, fierce, ‘70’s-style psychedelic cumbia. “The conguero can be doing salsa, the bass can be doing afrobeat or soukous, and there’s a tumbao somewhere else,” Rodriguez says. “It’s about being immigrant artists in the U.S. We are not just here to provide labor for the land—art is our weapon.”

Mexican-American singer-songwriter and multi-instrumentalist Sandra Lilia Velasquez first made a name for herself as one of the founding members of Pistolera, a band born in Brooklyn in 2005 who were one of the first in the U.S. to pair traditional regional Mexican rhythms with an indie rock sensibility.

In 2013, Velasquez delivered yet another new project with drummer Sean Dixon, called SLV. “One of the reasons I started SLV was because I felt I wasn’t growing anymore in Pistolera,” Velasquez says. “We got labeled a dance band, and if we did anything different, like slow songs, people were disappointed. I make whatever I need in the moment. It’s like when I cook dinner—I make what I’m craving and I only know what I need right now. I’m not a jukebox. I like that I still don’t know where it’s all going.”