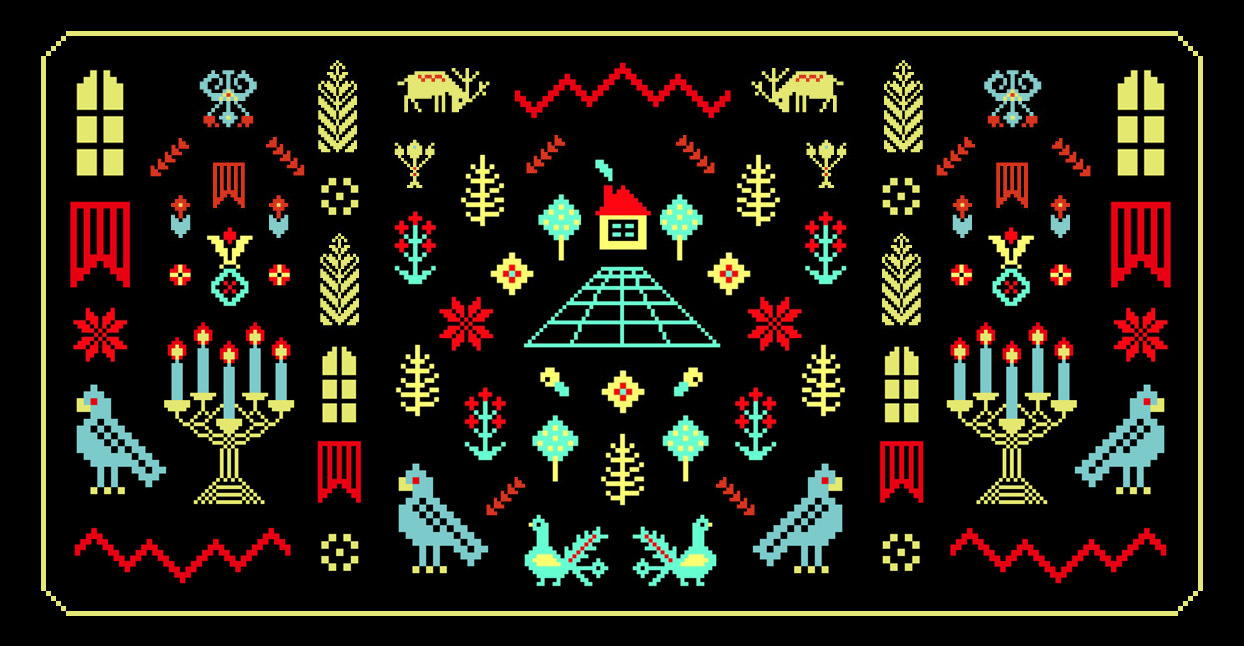 It’s not exactly shocking that Japan, the country where the modern video game industry truly took form, is home to a vibrant music community devoted to the creation of 8-bit sounds. Yet it is a bit of surprise to realize that this new generation of chiptune composers aren’t exactly influenced by the past.

“My generation, and the generation under me, didn’t really experience the Nintendo and Super Nintendo era,” says Toriena, one of the rising stars at the forefront of Japan’s chiptune music community.  “So we aren’t really familiar. But it is fascinating how there are generations now who are more interested in these retro-game scenes than when I started.” A subgenre of electronic music, chiptune has long centered around the pixelated sounds generated by sound chips from older video game consoles, which are widely available in the game-centric shopping districts of Tokyo’s Akihabara or Osaka’s Den Den Town. In addition to creating frantic music using a repurposed Game Boy and the popular software Little Sound DJ, Toriena also co-runs the label Madmilky Records, which she co-founded; she also handles all the artwork for her releases, and still finds time to team up with various national chain stores and to sing on other artists tracks.

Many early video games, such as Space Invaders (1978), were developed in Japan, as were their soundtracks. The now ubiquitous Super Mario Bros. soundtrack was composed by Koji Kondo for Nintendo in 1985. Pioneering Japanese electronic outfit Yellow Magic Orchestra included 8-bit bloops on their eponymous debut album in 1978, while that trio’s Haruomi Hosono would go on to release an album entitled Video Game Music, featuring various game themes reworked into proper songs. At the same time, the actual soundtracks to titles were becoming more complex, with composers making the most of available technology to create looping, enthralling songs that were jackhammered into the brains of thousands of kids.

Gradually, a devoted cluster of artists who were using these vintage sounds to create music began emerge, led by the pop outfit YMCK and Soichi Terada’s Omodaka project. Live shows and festivals devoted to chiptune began popping up all over the country. And even though the music itself is drawn from a very specific set of sounds, its style and format is constantly changing. “I think the Japanese chiptune scene is moving on to its next phase,” says Breezesquad, a chiptune maker from the western city of Fukuoka, a locale that has long housed a bustling 8-bit music scene.

“There’s already many Japanese chiptune youngsters, like Toriena and Gigandect, and some internet labels like Trekkie Trax and Maltine Records are really remarkable at connecting chiptune with other musical and cultural fields.”

Right now, Japan’s chiptune scene is an interesting mix of veterans and young guns, pushing the sound in all sorts of new directions. Here’s a list of some of the most notable names in the Japanese chiptune scene, artists who are molding the sound of what’s to come.

Toriena first encountered chiptune music as an 18-year-old college student in 2011. “I felt the sound of a Game Boy was like the sound of minimal techno, which I was really into back then, and found that very interesting,” she says. Soon, she was creating her own high-energy chip songs, and performing them at events across the country. Her appearance at Blip Festival 2012 in Tokyo—the very last installment of the celebrated chiptune gathering—was especially inspiring (during her performance, she danced in a frenzy on stage while playing an original Game Boy).

“I felt some kind of euphoria which I’d never experienced before, and I wanted to share that with others,” she says. “So I decided to make my own label.” The result was Madmilky Records, where Toriena showcases a variety of other 8-bit-loving artists from around the world, along with her own new material. Her songs still maintain an up-tempo pace, but she’s expanded the tools she uses to create them on releases like this year’s Pop Nega Pop EP. “I’ve always made my music with only a single Game Boy, but I thought if I could widen the range of soundscape, I may be able to get more people to listen my music.” Accordingly, Toriena has started working other electronic sounds into her music, along with her own singing voice, which appears all over her newer material, allowing her sparkling personality to shine through.

The other half of Madmilky Records (and described by Toriena in an interview as her “senpai,” or senior, and one of the people who introduced the style to her), NNNNNNNNNN’s chiptune compositions carry the spirit of his hometown of Kyoto inside them. Channeling the city’s status as Japan’s ancient capital, NNNNNNNNNN creates 8-bit takes on summer festival music (“Cyber Bon-odori”) as well as songs that take their cues from older Japanese pop music (“sonicsushi.com”). Between all the nods to the past, he’s also fond of heavier dubstep; many of his songs exult in finding out just how loud a pixelated bass can go.

Long-running producer Saitone has built a career on exploring the unlikely complexity of 8-bit sounds. Using just a Game Boy, he’s been crafting intricate electronic songs for almost a decade. His video-game bleeps and blips twist and intertwine in ways that highlight just how much can be done with a simple palette of basic sounds. The bulk of Saitone’s work had only turned up on compilations and remixes until the Tokyo-based chiptune label Cheapbeats released Dazzle in September. The album is Saitone’s most refined work to date, featuring four slowly-unfolding chiptune numbers.

For the Fukuoka-based Breezesquad, visual art is just as important as music. Working as a graphic designer by day, he says the linking of image and sound plays a large role in his art. “Of course, I spent my childhood with many kinds of video games,” he says. “I wasn’t very fanatic about playing them, though I had a lot of interest in the soundtracks.” He also points to chiptune outfits such as YMCK—as well as artists who have dabbled in 8-bit noises, like J-pop producer Yasutaka Nakata—as being influential in launching his project in 2009.

His latest album, Mönster, took shape after he found several books devoted to European handicraft at a flea market. “Handicraft has seemingly nothing in common with chiptune, but both have a retro and nostalgic feeling,” he says. “It gave me the idea to mix chiptune with folk and ethnic music.” The songs on his sophomore full-length feature rhythms rarely seen in chiptune, with a few non-chiptune percussive elements popping up on songs such as “A Broken Fridge” and “Der Kompass.”

Few chiptune artists in Japan today are as fun to watch live as Professor Sakamoto. Besides the fact that he wears a helmet topped with a Famicom console, he’s also able to play over 1000 video game songs from memory. He’s an adept composer, having written the music for various video games as well as creating up-tempo soundtracks for imagined titles—his album art is styled to resemble the start screens of old 8-bit video games. Sakamoto’s songs capture the feel of side-scrolling shooter games or ninja-centric platformers, even if the games they hypothetically score never existed.

Sapporo artist Tobokegao creates cheery little melodies whose simple sounds mask their painstaking detail. The young chiptune performer uses the popular program Little Sound DJ to create bouncy numbers full of hundreds of little flourishes, using sudden pixelated splashes and even animal noises to add depth and irreverence (see: “Dogsled Race Replay Theme”). His knack for cramming a universe of sounds into small spaces is on display throughout this year’s Picnic, where a hoppy number like “Sherbet” conceals innumerable shifts in sound, keeping it complex and engaging during its brief run time.

American-born Jaelyn Nisperos currently works as a video game music composer and sound designer in Tokyo, but under the name Chibi-Tech, she pushes 8-bit technology to its sonic limits. In the last few years, she’s taken chiptune into EDM territory, highlighted best on her track “Moe Moe Kyunstep (Part II – Kyun),” where she generates a rumbling bass drop using an NES. She’s since explored the idea further, and this hard-hitting approach makes her live shows all the more memorable.

One of the most prominent names in the Fukuoka-based Fuckoka Collective is Maru303, who has been releasing electro-inspired 8-bit numbers for years now. No release better sums up his style—and the Fukuoka collective’s frantic sounds—than his first full-length, Lo-bit Music Music Of The Fairy Tale Insane. The set balances manic bouncers (“Insane Youth”) with more reflective numbers, fully demonstrating the producer’s range.

Born in Fukuoka, Gigandect says he became interested in chiptune largely because of the “cool artists” operating inside his hometown. He first started creating music at age 14 using a program on his PlayStation to sample CDs. “I used to use microKORG and Akai MPC-500 for my live performances, but it was a pain in the ass to carry them around,” he says. A friend introduced him to Little Sound DJ, and he was hooked. “I love Game Boy, because it’s tiny and cute. I also like the fact that chiptune sounds are very limited.”

Since discovering this style, Gigandect has mostly embraced its aggressive side, creating music that moves at a fast pace, and which often incorporates touches of other electronic genres—like the EDM-inspired bass freakouts on “Lavender Town.” “I’m isolated in the chiptune scene, and so other artists probably don’t react to my music,” he says. But he has found like-minded creators in American label Zoom Lens and Japanese netlabel Maltine Records, the latter of which helped him to make a zippy track for a member of J-pop outfit Tokyo Girls’ Style.

Few 8-bit-focused artists in Japan do drama like Foilverb. Even on the producer’s earliest, blip-centric recordings, his songs had a sense of urgency and often conjured up a dark atmosphere usually not found in skippy chiptune. That’s been ramped up in recent years, as Foilverb has introduced non-game sounds into the mix, including violins and guest vocalists, lending his pixelated songs a cinematic vibe. None of his releases capture this better than the full-length Melancolia, a fine and unexpected balance between chiptune and post-rock stylings. Foilverb’s most recent offering, the Escapism Evolve EP, pushes the chiptune sound further to the edge, letting guitars and string swells anchor the songs.