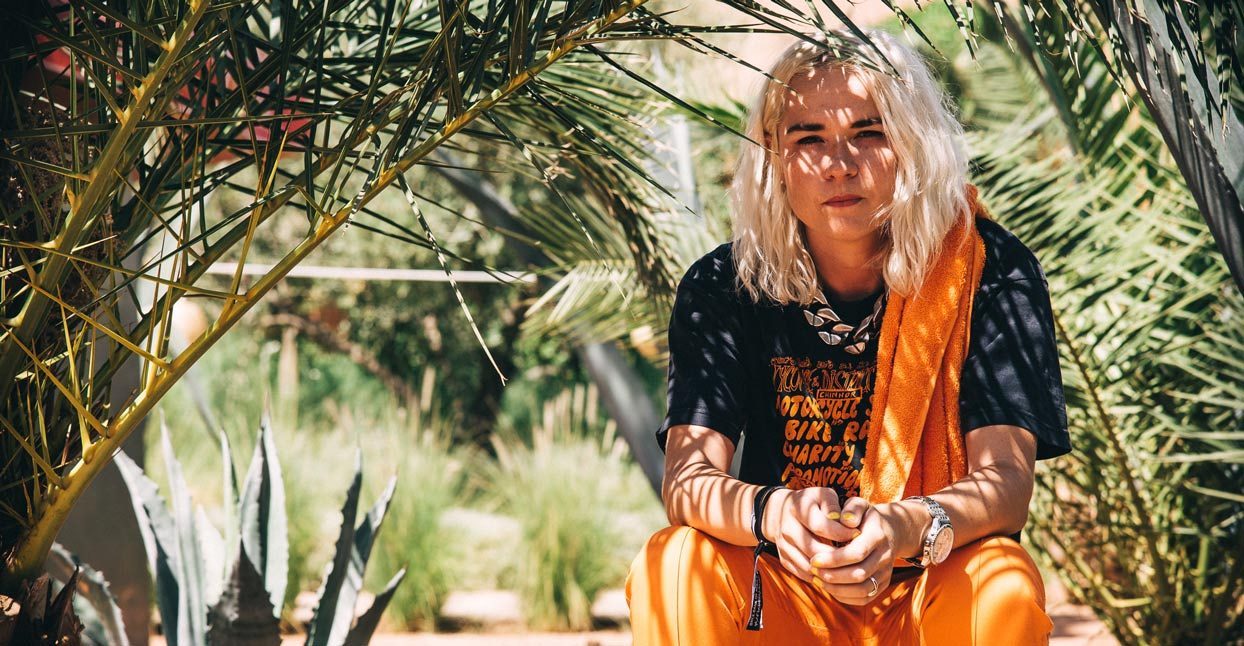 The highlights of this year’s lineup were three powerful DJ sets led by women: Nabihah Iqbal and HAAi, both from London, and Amsterdam-by-way-of-Berlin’s Perel. The women—all of whom produce their own tracks to complement their live DJ sets—set the tone for the future of electronic music in their home cities: undefinable, indescribable, and embracing an ever-changing environment. It was serendipitous that they convened in the heart of Morocco, a junction for Franco-Arab culture carrying centuries of creative histories and delicate power dynamics.

Drawing from the diverse influences of neo-psychedelia, African percussion, and krautrock, HAAi, Perel, and Nabihah Iqbal boldly tear down the barriers of genre. “I guess it’s only natural for all of [those sounds] to marry,” says HAAi, born Teneil Throssell. “I mean, there are still huge gaps between dubstep, and, let’s say, grime, but we aren’t afraid to explore the in-between.” Iqbal sees the collapse of genres as a good thing. “The blurring of genres is something that’s existed since the beginning of culture,” she says. “If you start to trace back any genre, you’ll see that it’s gone through various permutations—loads of people and places. Things meet and become something else. It’s a very beautiful thing.”

All three artists cite global culture as crucial to their practice. During the festival, Iqbal moderated a panel on the globalization of African music that featured producers based on the African continent: Coco Em and Kat La Kat. “When you’re in Europe, there’s a ton of discussion about African music, but you don’t really hear the voices of the people living and doing it,” she says. “That’s why this conversation was so eye-opening for me.” For Throssell, encountering global music often occurs in person and by chance: “When I was in the souk, I came across a stall of records,” she says. “The shopkeeper told me that I could listen to whatever I wanted on his turntable, but there’s something about grabbing a bunch and listening to them later that’s great. I’ll probably play one in my set later tonight.”

Most global creative scenes are still dominated by white men, and electronic music is no exception, but there has been a slow and steady improvement in representation. “This past weekend, so many young Moroccan girls have been coming up to me, saying things like, ‘I’ve been following you since your first EP came out, I’ve started DJing because of you,’” says Iqbal. “It’s overwhelming, but now I’m like, OK, this is why I’m doing what I’m doing.”

Throssell’s love for global music stems from an earlier stint in a psych-rock band. “I started listening to Anatolian funk from Turkey, then fell in love with Indonesian psych, and then I become obsessed with Thai beat records from the ‘60s,” she says. “Once you open that can of worms, you realize it’s all about instrumentation.” At the heart of HAAi’s latest single are the velvety voices of three preachers delivering sermons, which are carefully cut down to staccato blips of sound. “I just want to twist people’s melons,” Throssell says. That perverse desire is evident in the trove of sources she draws from: psych rock, Southeast Asian funk, and field recordings from the medina of Morocco. “You know when you notice the way someone speaks, and it’s perfect? I bring my field recorder everywhere for that reason,” she says. “I love making recordings because the sound belongs to everyone through you.” Now based in London, Throssell has landed a residency at club staple Phonox hosts a radio show on Worldwide FM called Coconut Beats, which foregrounds psychedelic music from around the globe.

“A lot of the venues I grew up with don’t exist anymore, and that’s quite sad,” says Iqbal of her home city of London. “But others pop up—there’s always something going on.” Conceptually influenced by ancient Egyptian mythology, Nabihah Iqbal’s 2017 project Weighing of the Heart conjures the airy atmosphere of dream pop, minimal krautrock kicks, and the textured vocals of psychedelic rock, but she acknowledges that her sound is “always shifting.” A self-proclaimed “Londoner, born and bred,” Iqbal hosts a beloved NTS radio show that highlights music from a different global region each fortnight—a passion stemming from her undergraduate studies in ethnomusicology at the School for Oriental and African Studies. The primary thing her theoretical background teaches her, she says, “is that you have to listen to music with an open mind. There’s so much music to appreciate even if you don’t know its history—that’s the beauty of it all. I want to learn as much as I can.”

Perel cites the important role geography has played in shaping her transitory and cross-genre sound—both transnationally and the places in which they’ve settled. “I got to Berlin after living in a smaller German city for university, and that was next-level for me. But it was also really tough,” says Perel, aka Annegret Fiedler. “I felt that my sound wasn’t the typical “Berlin” sound—it wasn’t minimal or techno enough for the time. That forced me to become comfortable with not having a set style, but in the best way possible.”

“It’s a tough question,” Fiedler says when asked to describe the sound she creates as Perel. “All over the place—I guess I make music with a lot of energy.” Centering around choral German-language vocals, the Saxony-born and Amsterdam-based Fiedler’s music harkens back to the outer-space ambience of Tangerine Dream, the disco beats from the ‘70s, and cross-beat rhythms from West Africa. After some time feeling like her cross-genre music couldn’t fit into the scenes she’s moved through—especially the pure house and techno music dominating Berlin’s scene—Fiedler feels at home now signed to James Murphy’s anti-genre DFA Records. “They’re exactly like me, but in label form. At the end of the day, my music is undefined. In a way, it makes me more specific.”