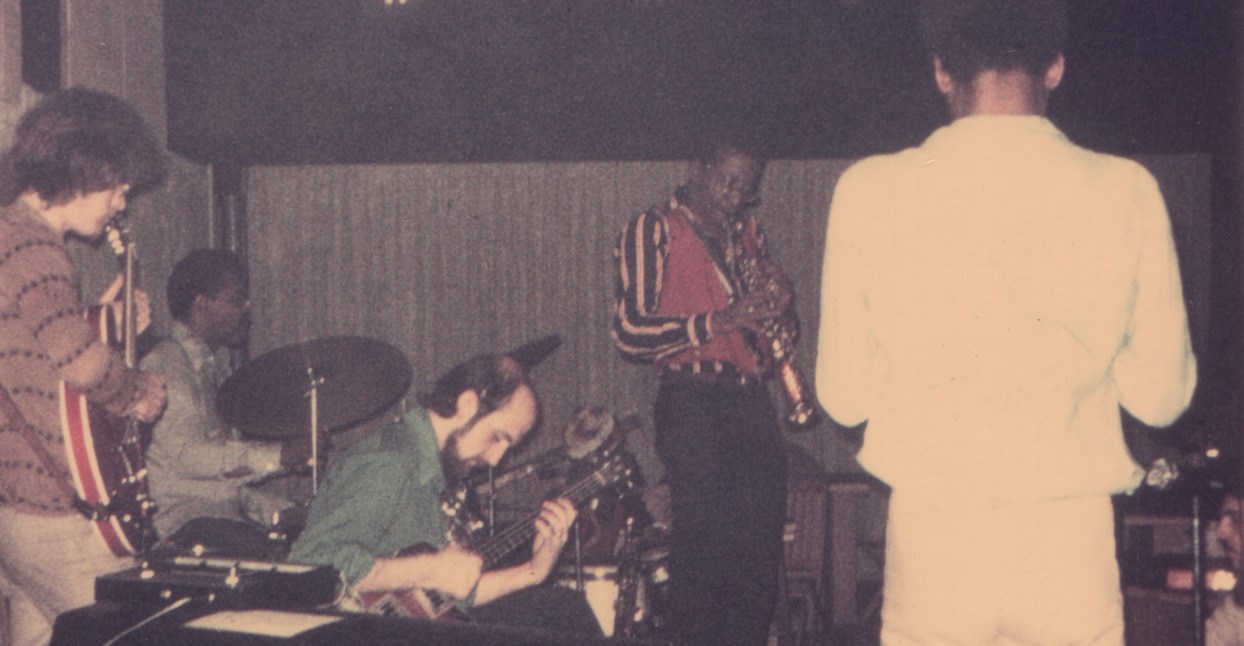 The jazz scene in Boston—which includes free jazz, the avant-garde, and various hybrid styles—has experienced something of a resurgence in recent years, but its roots date back to the mid ‘50s.

“Cecil Taylor was a student at the New England Conservatory and Makanda Ken McIntyre, another guy on the scene, was studying at the Boston Conservatory,” Mark Harvey, a local jazz historian and senior lecturer at MIT, says. Harvey is the author of an 80-page companion booklet to the compilation The Boston Creative Jazz Scene, which collects crucial entries into the city’s ‘70s-era alternative jazz movement. “The two of them were really the forerunners of everything that came after. Taylor’s first recordings were made here in Boston with a Harvard graduate named Tom Wilson.” Wilson released Taylor’s debut, Jazz Advance, on his Boston-based label, Transition Records, in 1957 (he would later produce Bob Dylan’s first records, as well as LPs for Simon & Garfunkel, The Mothers of Invention, The Animals, and many more).

Boston’s initial draw, at least for young musicians, is its music schools—places like the Berklee College of Music and the New England Conservatory. The city’s streets and subway stations are crowded with performers, and while many people move on within a year or two, others stay. It’s the supportive environment—especially for the more challenging artists—that keeps them in town.

“In the late ‘60s and early ‘70s, there happened to be a lot of venues,” Harvey says. “A lot of them were very small. It might have been a community center or church basement or art gallery—at least, for the free jazz people and for things that were non-traditional. You wouldn’t find free jazz welcome in some of the clubs. But the alternative spaces were the places you could play. And that’s still pretty much true today.”

But alternative jazz, given its non-commercial ethos, doesn’t come without sacrifice. “It’s not that the local venues are very successful,” says Jim Hobbs, saxophonist for the Fully Celebrated Orchestra. “But they’re there whenever you need them. I think that’s the good thing about Boston, because you can’t make a living, you just play when you have to. You play because you have to.”

Guitarist Magdalena Abrego agrees, although she notes that the problem isn’t unique to Boston. “Finding venues is a problem facing artists in cities throughout the United States,” she says. “It really feels like they are closing faster than they are opening. Plus, since the pay-to-play model has become standard, there is the prohibitive cost of room rental fees. It’s frustrating, because I think Boston is a city full of interesting spaces that represent a new concept of music venue. But it can be hard to pitch your weird avant-jazz noise to the trendy brewery down the street.”

Despite those issues, the Boston scene is strong and it has been for decades—so much so that in 1981, when Miles Davis re-emerged after five years of inactivity, he came to Boston to kickoff his comeback.

“I love Boston,” Davis told The Boston Globe. “I just happen to have a thing with Boston. Every time I have a new band and a good band, I just come to Boston… I like Boston people. It isn’t a question of how many jazz clubs you have here. It’s the attitude of the students. The students are thinking, you know what I mean? They are not afraid to look beyond today’s music or anything else.”

It’s that thinking that keeps Boston strong. That much was obvious to Davis, and it’s a constant—as this multi-generational sampling ahead attests—that speaks to other artists as well.

Chicago transplant and saxophonist Arni Cheatham formed Thing at the tail end of the ‘60s. He released the band’s self-titled debut—reissued in 2018 on Boston label Cultures of Soul—in 1972.

Thing—both band and album—bear many of the hallmarks of early Weather Report and Miles Davis’s first electric albums, like funky grooves and spacey arpeggios played on a Fender Rhodes. But Thing isn’t a fly preserved in the amber. The album’s grooves and ensemble approach are forward-thinking, sample-friendly, and resonate in a way that sounds fresh to contemporary ears.

Thing was a collaborative effort. The music was improvised and based on loose ideas and sketches that Cheatham explained to the band in advance. “The music is absolutely not about me,” Mark Harvey quotes Cheatham as saying from the album’s liner notes in The Boston Creative Jazz Scene. “I allow for maximum flexibility for the individuals. I’ll explain the concept, and if there is one, the story behind a piece of my music before we play a single note. I feel that if the players know the emotion behind or the statement that a piece of music is built upon, they will absolutely be better able to get ‘inside’ the piece and move around among the molecules of the music.”

Trumpeter Stanton Davis came to Boston in the late ‘60s, studied at Berklee, the New England Conservatory, and Wesleyan University (earning a masters), and worked and recorded with noted composer and theorist George Russell (he’s featured on Russell’s 1972 album, Living Time). In 1977, his band, Ghetto Mysticism, released Brighter Days, which is a fusion album in the truest sense of the term.

Fusion—as in the fusion of jazz and rock—reached its apex in mid ‘70s Boston. Local artists like Pat Metheny, John Scofield, Kevin Eubanks, and Tiger Okoshi were amongst its most well-known practitioners, and Davis was a part of that scene. His music drew from the deep waters of Russell’s harmonic concepts and fused them with the rhythms of his native New Orleans, funk, and a very ‘70s New Age vibe.

Brighter Days is loaded with heavy grooves—dig Tim Ingles’s opening bass riff. It’s open-ended and improvisatory, although most of the tracks were shortened for the initial release. Outtakes, alternative mixes, and extended jams from the album’s sessions were released in 2015 as a separate album, Isis Voyage.

Jim Hobbs’s trio, Fully Celebrated Orchestra, is an acoustic unit with an obvious debt to early ‘60s Ornette Coleman, and, if you believe the liner notes to their 1993 release, Peace & Pig Grease—owes something to punk rock as well.

“The label had a guy in New York who they leaned on,” Hobbs says in reference to the trio’s “punk” moniker. “We used to play this place called Downtown Beirut—it was like a heroin hole-in-the-wall—and he heard us there. I think it was more of the setting and our high-energy attitude that made them look at us that way. It was also at a time that jazz had become about these young lions and more traditional sounds. It was a definite trend in the jazz world and what we were doing, comparatively to them, was a sort of punk take on jazz, because we were more irreverent.”

Hobbs first came to Boston to study at Berklee in the late ‘80s and moved to New York after he graduated. But like many Boston-area musicians, he returned to the city after a few years. “I had gotten a letter from Silkheart Records saying they wanted to record us,” Hobbs says. “I went back to work on Monday and I had been laid off, so it was like the perfect storm. Timo [Shanko, on bass] had been on the road with [blues man] Eddie Kirkland and had just landed back in Boston—when he came off the road, most of his friends were there—and I figured I could switch my unemployment to Boston and work there while doing this record.”

He never left. The Fully Celebrated Orchestra is still a fixture on the Boston scene and play a regular residency at the Midway Café in Jamaica Plain.

Magdalena Abrego’s 2016 release, Peter Cat, is named for a jazz club once owned by Japanese author Haruki Murakami. “I am a fan of Murakami’s writing,” Abrego says. “I used the title of his former club to imagine a house band that would exist in an alternate reality, where mainstream jazz sounded more like the songs on my EP.”

Peter Cat is an edgier, more dissonant approach to traditional jazz, which, at the time Abrego recorded it, was new to her. “My collaborators were essentially straight-ahead jazz musicians,” she says. “But they were willing to follow me down this unconventional rabbit hole. It was my first experiment with departing from more mainstream modern jazz in favor of crunchier sounds.”

Abrego moved to Boston to study at Berklee and is currently working on a masters at the New England Conservatory. But she doesn’t plan on leaving after graduation. “Nearly all of my musical mentors are based in New York City,” she says. “Their advice for me is to move there, but I don’t know if I buy that. The issues in Boston are not unique to Boston, and I feel hopeful that the amazing community of musicians here has the potential to deal with these challenges in new and creative ways.”

Karayorgis is a native of Athens, Greece, but relocated to Boston in 1985. He’s an expert in the music of Thelonious Monk and Lennie Tristano, and led the Thelonious Monk Ensemble at the New England Conservatory in the early ‘90s.

Few people are as associated with the Boston creative jazz scene as tenor saxophonist George Garzone. Garzone is a founding member of the Fringe—a Boston institution—which also includes drummer Bob Gullotti and bassist John Lockwood. The band has been playing every Monday night since 1972 (Lockwood is the newcomer in the band, he replaced founding bassist Rich Appleman in 1985); the band’s current residency is at the Lilypad in Cambridge.

Garzone teaches at Berklee, though he has also taught at the New England Conservatory, the Longy School of Music, and Northeastern University—his former students include Joshua Redman, Branford Marsalis, Chris Wood, Chris Speed, and many others.

Needless to say, the man can play. His work with the Fringe is, as the name implies, freely improvised tenor madness. The Monash Sessions, recorded with a big band at Monash University in Melbourne, Australia, shows off the breadth of his approach, from standards to more adventurous original compositions.