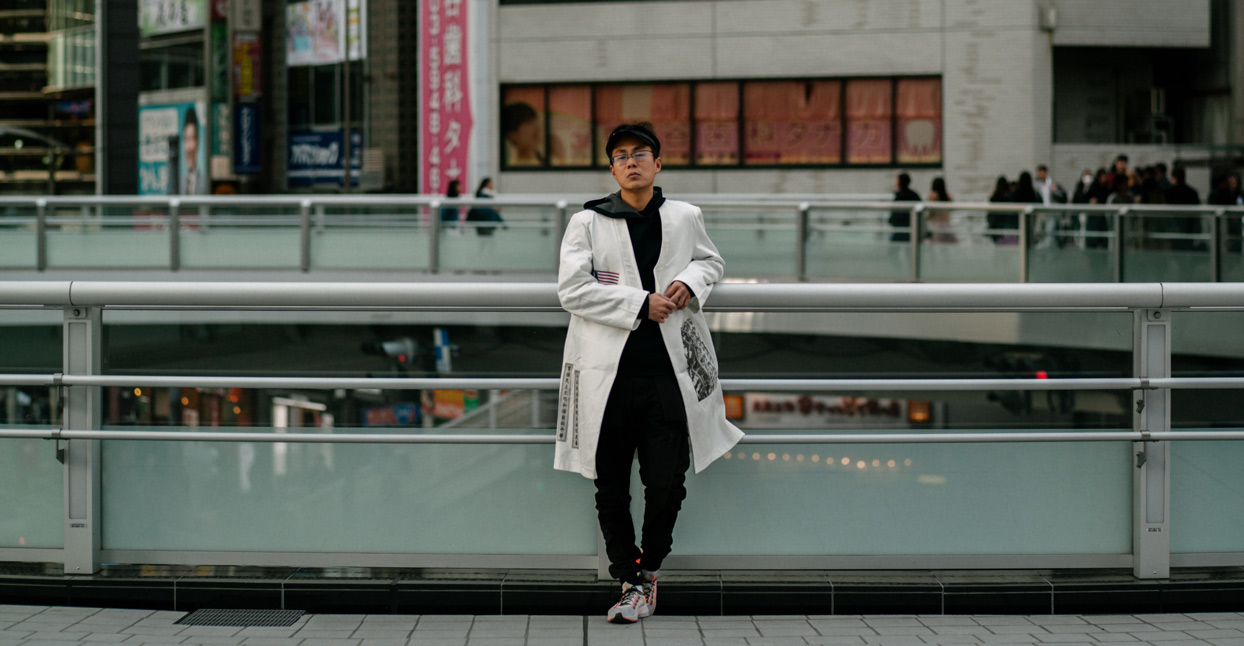 “If I had known about all of these musicians in Beijing when I was living there, maybe I would have stayed for longer.” London-based experimental DJ object blue discusses her contribution to Beijing-based label S!LK’s first compilation album, Breaking Fresh. Raised in Beijing before moving to London to attend university, object blue was one of a number of international musicians to appear on that first S!LK release, alongside the likes of Organ Tapes and Cisco De Sol. S!LK’s ability to not only connect with artists from the Chinese diaspora, like object blue and Organ Tapes, but also with forward-thinking artists in the Australian and Eurpoean electronic scenes has positioned them as one of the most exciting underground labels in China.

Beijing is probably better known for its punk and indie rock; the storied club D22 gave rise to bands like Hedgehog, Carsick Cars, Snapline, and P.K.14, who helped create a vibrant undercurrent of independent rock music in the years following the Beijing 2008 Summer Olympics. But in recent years, electronic music has begun gaining prominence.

“China’s electronic scene, in general, has developed tremendously in the last decade,” says Brad Seippel, a Beijing-based musician and producer. “Early on there were artists like Howie Lee and Guzz and Jason Hou of Do Hits, as well as people like Puzzy Stack, Bloodz Boi, and the Syndicate crew all doing nights where you could expect to hear future bass, trap, and other forms of bass music.”

Those innovations, coupled with the introduction of venues like Dada, Zhao Dai, and Lantern, that regularly host some of the best underground musicians in the world, has helped the Beijing clubbing scene to come into its own, with local players driven to establish quality labels that reach beyond China’s borders.

At the end of 2018, Ran Music—a label that had, until quite recently, been mostly made up of house and techno producers—launched their second sublabel called Ran Rad, which focuses on bass music in particular. The new label was also a way to connect with musicians between Beijing, where Ran Music label head Shen Li Jia is based, and Leipzig, Germany, where Jiesi Chen of Ran Rad had set up shop.

Below we highlight eight of our favorite experimental acts rattling around Beijing right now.

Touted by just about everyone we spoke to as one of the best producers in Beijing right now, Luxixi’s work goes far beyond simply performing live. With her promotional imprint THUVDR, as well as her recently founded party series Social Practices, she’s drafted young female producers like Tsunami, Where1s1t, DJ Tsinglung, and Liia, adding a much-needed balance to what tends to be an overwhelmingly male-dominated scene. She also collaborates regularly with Londoner and Beijing-based Mouna Press, and has been out on tour with bass and R&B label Babel Records. A well-connected fixture within the scene, Luxixi assembles super-tight and spine-tingling drum beats, as on 同一种调调​ (​Riddim Edit​)​, and provides gorgeous vocals on the works of other artists, like her collaboration with Spyfi.

Like a lot of young Chinese kids, Spyfi’s musical training began with classical piano. He studied for years at Xinghai Conservatory of Music in Guangzhou before being admitted to study at the Communication University of Music in Beijing. As his interest in the piano waned, his fondness for making mixtapes and computer-based compositions grew. He now dabbles in everything from dubstep to grime, as well as techno and EDM. On Let Me Low It, his musical range and adaptability allows him to make use of field recordings and sleepy, melancholic piano which are especially beguiling on “Intro.” He follows that contemplative opener with wobbly dub on “Uptown Tin Shui Wai,” before dipping the intensity again for “Never Do Come True,” on which he engages with delicate, feather-thin beats and enlists vocal assistance from Luxixi, creating a truly gorgeous future bass track.

Radiax’s fascination with electronic music began when he was a child growing up in the bitterly cold far Northeastern city of Jilin, in Liaoning province. It wasn’t until he arrived in Beijing, he says, that he began to find himself musically, teaming up with a number of labels, experimenting with a variety of styles, and cementing himself as one of the most exciting producers in the city. Broken Beats, his 2017 EP which appears on Babel Records, seems to exult in the silky smooth, jazzy rhythms that Babel Records are known for. Meanwhile, “Urban Night” is built around an irresistible percussive undercurrent, beautifully offset by glittering funk. On “Give Me A Chance,” Radiax plays around with atmospheric garage music. Broken Beats, as a whole seems to be an effort in taking the signature Babel Records sound and applying it to his own gritty preferences. Most recently, Radiax further expanded his catalog of sounds, with the uptempo, jungle track “Samba Shock” on Ran Rad’s The Kickoff.

Having transplanted to Beijing from the sleepy seaside city of Xiamen in Southeast China two and a half years ago, Negative 808 became acquainted with the scene by attending club nights at the city’s vaunted Dada night club, bumping into musicians like Puzzy Stack, Bloodz Boi, Shen Lijia, and others. While his interest in grime and drum & bass began on the internet via a Weibo account called DuckMan, he was intrigued by the parties being thrown by popular Beijing promotors S!LK, The Syndicate, and Ran Music. Following an appearance on the 10th compilation from the China-U.S. promotional platform Seippelabel, Negative 808 quickly followed up with appearances on the inaugural records from S!LK and Ran Rad. Playing around with sounds associated with grime and footwork, he occupies a space where not many Beijing artists are experimenting. Musician, producer, and label runner Brad Seippel says that “aside from myself here, there is really only Negative 808 making stuff that I would consider footwork.”

Puzzy Stack has been a promotor in the Beijing underground scene since 2013, hosting parties with fellow Beijing hip-hop head Bloodz Boi under a trio of different promotional labels. Digital Freedom gave way to Trap Don in 2014, which later gave way to S!LK. The latter was founded in 2016 as a way to expand their palates, and to create a more diverse and pluralistic style of party. It wasn’t until the end of 2018 that S!LK officially became a label. Puzzy’s musical style is hard to define; there are still strands of trap and hip-hop tied into most of what he does, but his exposure to experimental club sounds via the likes of Shanghai labels like Genome 6.66 Mbp, SVBKVLT, and others, has clearly informed his sound through the years. On “龘,” his collaboration with 3asic, the duo create thrilling, upward-ascending futuristic beats, which compact to make something altogether romantic.

Taking inspiration from a variety of genres, including metal and industrial noise, Zaliva-D’s music feels cult-like—alien and spiritual all at the same time. The group is made up of Li Chao (music) and Aisin-Gioro Yuanjin (VJ), and was founded back in 2003. Album titles like Tribute to BDSM point towards their no-holds-barred, don’t-give-a-fuck attitude, making them a rarity within The Middle Kingdom. Sky Singing, which came via SVBKVLT, was a remarkably realized record that brought their dark electronic visions to life in horrifying relief, but Forsaken, with its slow-paced, tribal intensity is a record that is mesmerising in the best possible way.

Howie Lee is still seen as the most influential bass musician in Beijing, despite the fact that he doesn’t really make bass music anymore. His Do Hits label began something of a renaissance in the capital city, blending various strands of bass music like trap and garage with Chinese sounds. Currently, Lee is back in Beijing after a period of time spent in Taipei, and is still releasing new music at a steady clip. His collaboration with Fishdoll on two tracks, entitled “慢化无／飞夜种,” doesn’t just make use of traditional Chinese instruments—the two artists combine to create syncopated, emotional soundscapes with high-relief vocals, strings, and occasional field recordings. Do Hits might have been inactive for the better part of a year, but make no mistake that artists in the experimental scene around the city, and the country for that matter, still have their eyes locked firmly on Howie Lee.

In some ways, Joy Ginger’s music is similar to Radiax—though it’s much more vibey, and finds use for more fun and funky samples. His style can broadly be described as jazz, funk, neo-soul, or future beats, but there are tiny quirks and flourishes that defy all of those categorizations. As he works his way through raindrop-sampling songs like “Fall Asleep Before Sunrise,” or the twinkling “Stay In My Arms,” you begin to hear his music as if it’s a highly polished, well-produced variation on a typical child’s music box. A sense of nostalgia sums up Joy Ginger’s music perfectly.