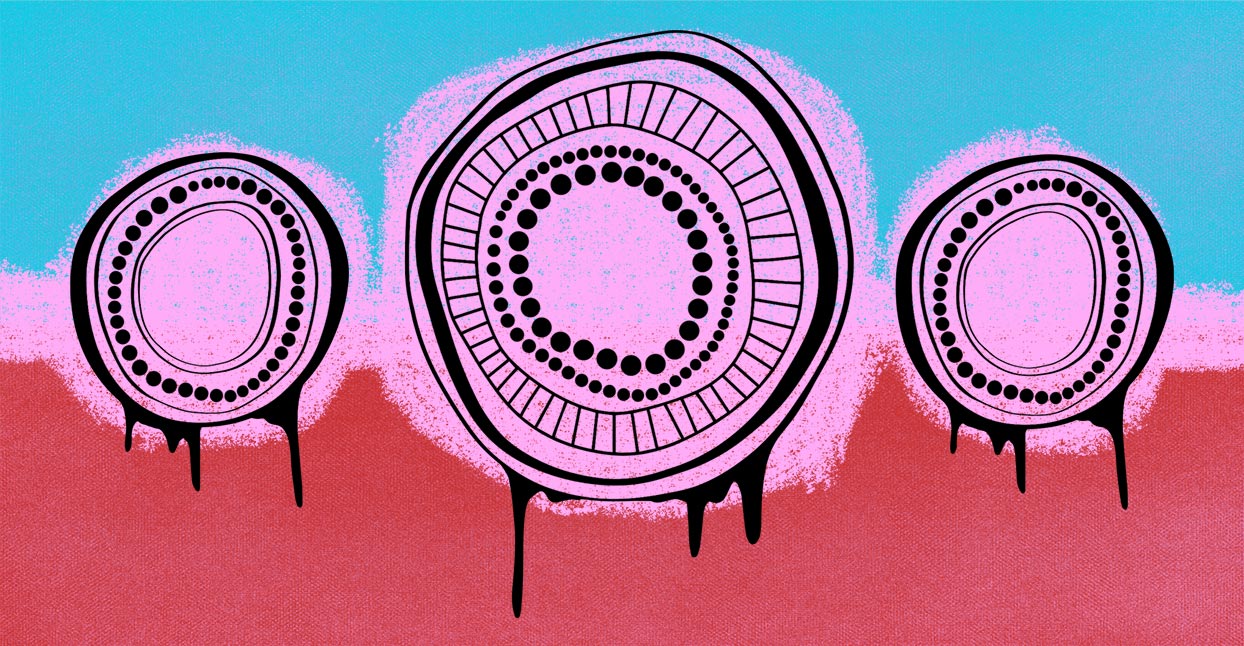 Bobby Bununggur is a Yolngu Songman from Ramingining in northeast Arnhem Land, the ‘Top End’ of Australia. Yolngu are one of the largest Indigenous groups in Australia, and their home in Arnhem Land is almost untouched—one of the last strongholds of traditional Aboriginal culture on the continent. In the mid ‘90s, Bunungguur joined two of his fellow Yolngu Songmen, to record and release a reimagining of the songs of his community. Working with Peter Mumme, an ambient producer living in Darwin, the trio created Waak Waak ga Min Min, an album that opened a window into the richness and beauty of Aboriginal tradition.

For Indigenous Australians, the world’s longest continuous cultural tradition, music and society are heavily intertwined. All knowledge—including detailed information about the climate, specific social mores, and the spirituality of Australia’s First Peoples—exist as oral memories. In many regions, these memories have been meticulously kept and passed down over the last 80,000 years from generation to generation via song, dance, art, and stories. Physical markers play a large part in memory preservation, with particular landmarks along a route or track prompting additional details of a story. Aboriginal elders move along navigational tracks singing and recalling information. These tracks are known as ‘Songlines.’ While a significant number of Songlines and other traditions have been damaged or destroyed by colonial acts of dispossession, the remaining knowledge systems preserve the essence and purpose of the stories, if not in full.

Some Songlines can traverse the entire width of the Australian continent, acting like a map. In his book The Songlines, Bruce Chatwin explains, “The melodic contour of a song describes the nature of the land over which that song passes.” These songlines describe the creation of the continent by ancestral beings, whose descendants—the current indigenous population—bear responsibility for reiterating, recreating, and disseminating the stories to a younger generation.

“We can pass songlines and stories onto the young generation, and they can keep it in a book, CD, whatever,” says Bobby Bununggurr, via transcripted conversation with Peter Mumme, from his home in Ramingining. “When they hear it, they’re all going to join in…black and white. Bring together Western culture music and traditional culture both ways.”

Balancing traditional and Western cultures is a delicate process for indigenous Australian musicians, since commercial and cultural values are often in opposition to one another. Dr G  Yunupingu, a blind singer from Elcho Island in the far north of Australia, was an ideal example of this dichotomy. As the most commercially successful Indigenous Australian musician, Dr Yunupingu (also referred to as Gurumul before his death) was praised for the way he balanced two worlds, achieving widespread acclaim for his talents as a multi-instrumentalist and for the purity of his soaring but gentle tenor voice. His sales figures reflected that adoration—his 2008 debut album sold more than three million copies in Australia. However, a documentary released just a few days after his death in 2017 provided a fascinating glimpse into the last-minute cancellation of a lucrative tour of the US. Dr Yunupingu had decided to stay at home to learn the traditional stories of his ancestors in Elcho Island—stories that his community expected him to care for.

To the younger generation of Indigenous musicians traversing the industry, this balance between culture and commerce has long been troubling. “I feel like we have forgotten what the music really is, being so industrialized, commercialized, and over-consumed,” says James Albert, a producer, MC, and vocalist from the Larrakia Nation, Traditional Owners of the Darwin area of Australia’s Northern Territory. “Somewhere along the line, I feel we may have lost sight of [music’s] true power and essence.”

In 2019, there’s no shortage of talented Indigenous musicians passing down the knowledge and language of their ancestors through music. In addition to Waak Waak Djungi, who integrate traditional music with contemporary electronic sounds, there are Indigenous artists working in genres including reggae, punk rock, gospel blues, and hip-hop. Artists such as DRMNGNOW (“Dreaming Now”), Yothu Yindi (Gurrumul’s former band), Emily Wurramurra, Jimblah, and many more, have all joined First Sounds to call for the long overdue nurturing, growth, and celebration of their music by the broader Australian public.

In Jimblah’s own words, “Music is our connection to land, time and space. It’s our way of telling stories and speaking where words fail us. It’s our way of celebrating our culture and who we are […] Bringing more ideals and values into the music space, with First Nations voices, will be such a groundbreaking thing—and I’m talking globally.”

For a population whose voice was stolen (literally), and whose identity is in serious threat (98% of Aboriginal music tradition has been lost as a result of colonization), there has never been a more important time to celebrate the music. Here’s a list of eight outstanding artists who are keeping culture and songlines strong through their art.

Waak Waak Djungi’s little-known LP from the mid ‘90s pairs three Yolngu Songmen with Victorian composer Peter Mumme on a collaboration that features acid grooves as timeless as the Yolngu stories they accompany. Reissued in 2018 by Efficient Space, Mumme’s vast and expansive instrumentation evokes winding rivers and endless horizons, both mystical and magical. The Yolngu Songmen (Bobby Bununggurr, Jimmy Djamunba, and Peter Milaynga) share ancestral stories of ceremony, community, and earthly pleasures. In conjunction with its third vinyl pressing, a 20-minute documentary of Waak Waak Djungi’s 1998 Japanese tour has recently been shared by the label. The documentary shows the songmen excitedly walking the streets of Tokyo and performing ceremonial song and dance for their Japanese counterparts.

Kardajala Kirridarra (which translates to “Sandhill Women” in Mudburra) is an all-female group from Marlinja and Kulumindini in Australia’s Northern Territory. Descendents of bush women, the family members (two sisters and their niece) team up with Melbourne-based electronic producer Beatrice ‘Nalyiri’ Lewis for this collaborative effort, designed to “empower Aboriginal women through music.” Lush, downtempo arrangements that recall Bjork and Ibeyi provide the foundation for stories about young girls coming of age, the wisdom of elders (particularly grandmothers), and young indigenous women grappling with traditional versus modern value-systems. “Ancient time in a new paradigm / The sand shifts as two worlds collide.”

Emily Wurramara is a 23-year-old singer and songwriter from Groote Eylandt in the Northern Territory. Her debut album, Milyakburra, sung in both English and her traditional language Anindilyakwa, is a document of Wurramara’s personal history, celebrating family, culture, and country. Album standout “Ngarrikwujeyinama” is hauntingly beautiful: A tremolo effect on the electric keys lays beneath a captivating vocal hook written in response to the destruction of the seabed and cultural Songlines in her homeland. “We all belong to this land,” Wurramara sings. “We all belong to this sea / My heart is hurting / This is my home / This land is bleeding.”

Frank Yamma is a Pitjantjatjara man with a rich, soulful voice that channels the sun-baked lands of his home community. Hailing from Docker River, a remote town in the Western Desert of Central Australia, Yamma’s guitar-led folk songs tell deeply personal stories of his life, culture, and identity. “I’m a Pitjantjatjara man, and that is a big part of my music,” he says. “It’s in my language, it’s in my songs, it’s in everything I write.” Pitjantjatjara is just one of five languages Yamma speaks, but across his two most recent albums—Countryman and Uncle on Wantok Music—it is the most prominent. “It’s important to sing in my language,” he says. “It’s important that it doesn’t disappear.”

DRMNGNOW is Neil Morris, an emerging hip-hop artist who logged a handful of well-received singles over the last two years. Ancestors, We See You, Indigenous Land, and Australia Does Not Exist each powerfully describe the injustices facing First Nations people in Australia (a name he does not accept). Strong themes of identity, integrity, and connection to country guide his work, which he ensures will always uphold the standards of his elders—“The great warriors that have come before me in my line as a Yorta Yorta person.” Morris delicately walks the line between hope and resistance in his music, which is underlined by sparse, melancholic arrangements. “It is about Indigenous survival,” he says. “The beauty of that, the strength of that, the pain of that, the joy of that, and the challenge of that.”

Olive Knight, aka Kankawa Nagarra, is a 73-year-old Walmatjarri and Bunuba woman who was born in the Great Sandy Desert, and has a penchant for gospel blues. At the age of 50, Olive became transfixed by American Blues musicians like Muddy Waters, BB King, and Buddy Holly. The repetitive nature of the Blues reminded her of sounds she had been exposed to growing up, such as the nullanulla (hunting sticks), which are used to mark time in ancient ceremonies. Olive channels the sounds of the Deep South to tell stories of her homeland and her people in the Australian Kimberleys, touching upon issues from hunting goannas on ancestral country to fracking in the Kimberleys. In the 1960s, Olive helped to develop the Walmatjarri dictionary in an effort to officially preserve her language.