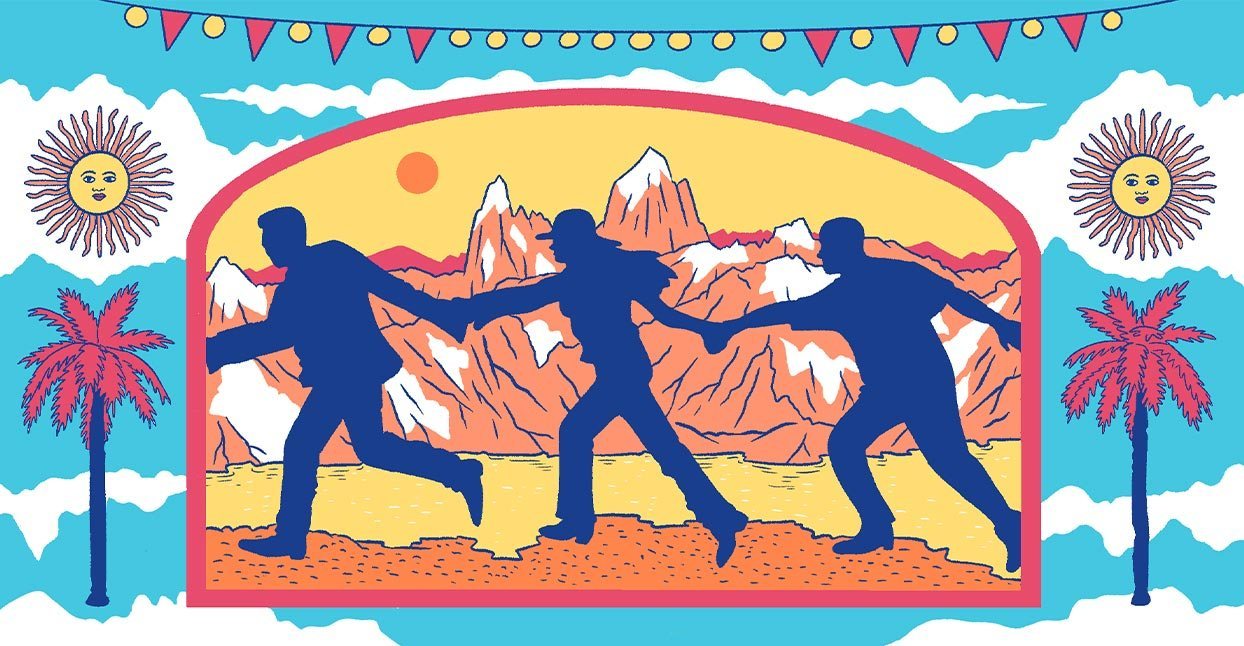 When celebrated Latin American songwriter Gustavo Cerati released the forward-thinking Bocanada in 1999, it seemed like he had bent time. An electronic ode to a dying relationship, Bocanada was instantly hailed as a masterpiece. Its songs were built from vinyl breaks taken from old prog and rockabilly LPs, to which Cerati added studio finesse and layers of synth, creating entirely new music. Listeners praised it as an up-and-coming form of pop, a bridge between Argentina’s new wave with newer sounds that arrived in the wake of downtempo and big beat’s global rise. In retrospect, the album could also be understood as a bridge between two musical worlds. The sound of Bocanada was novel, but in its choice of samples—from Elvis Presley to Electric Light Orchestra—and its traditional structures, it also seemed to be serving as a kind of summary of pop history up to that point.

The environment into which Bocanada was released echoed those changes: new venues were beginning to take the place of old staples across Argentina. Cemento, considered Buenos Aires’ CBGB, was already on the path to slow demise—triggered by its shabby sound system and inability to compete with newer clubs. (It would ultimately be shuttered in 2004.) Considered in that light, Bocanada feels like an elegy for a musical past that was beginning to disappear—a love letter to the fading memory of Argentinian pop.

Almost two decades after Bocanada’s release, the country’s pop music scene is experiencing something of a rebirth. Beginning in the early ‘10s, a new generation of independent musicians began laying claim to the country’s pop legacy. Unlike Bocanada, which leaned heavily on samples from old records, these new pop artists built their sound by looking ahead, making music that was unrelated, both genre-wise and sound-wise, to Argentina’s legacy, and, instead, created unorthodox pop with a modern aesthetic.

“For us, ‘pop’ means music that can speak to anyone,” explains Salvador Colombo, who in 2011 founded Silvestre y la Naranja and now plays synths for Bandalos Chinos. He sees pop as “something that attempts to transcend”: a description of intent rather than content. “Pop, for me, is a direct way for the songs to reach our hearts,” says Francisco J. Nicholson, who founded Silvestre y la Naranja alongside Colombo.

Collaboration is crucial for the country’s new wave of bands. “In Argentina, there’s never been a scene as collective as this one,” says Colombo, who’s recently remixed tracks (under the alias Rod Mo) for art rock outfit Usted Señalemelo. “There’s no competition, and we celebrate someone else’s accomplishments. I don’t think there’s a single place in the world with a network that’s so close, so connected.” Facundo Castaño Montoya, vocalist for El Zar, agrees: “This is a brotherhood. Within the scene, we find affinity in our mindset.”

While Niceto Club, a venue in Buenos Aires, is sort of an unofficial headquarters for the scene, the bands it contains hail from all over. As Esmeralda Escalante, who fronts folk-pop pair Ainda Dúo, puts it, “A federal scene is a healthy scene.”

This is a brief guide to some of the artists igniting the pop explosion in Argentina.

Colombo and Nicholson’s band Silvestre are the perfect ambassadors for the country’s new, genre agnostic sound. Since their formation in 2011, they’ve prowled all across the genre spectrum, from banjo-driven indie folk songs about running through the forest to synth-heavy, neo-psychedelic suites about the value of silence and solitude. But psych was not the last stop on Silvestre’s musical journey: they recently released “Todas esas tardes,” a straightforward chamber pop tune that foregrounds an adorable love story. “We want to reach out to a lot of people,” says Nicholson. They’re en route: slated to release a record in the next few months, the first cut “Todas esas tardes” is their strongest effort yet—a relatable twee story backed by trumpets, saxophones, low-key synths, and jangly reverb.

De la Rivera’s synth-funk and city-pop tracks traffic in universal 21st century themes: platonic attachments, short-lived flings, offline video games. They’re also known for creating frantic, futuristic songs that make audiences dance like it’s 2999. “When you say ‘pop,’ we think of Prince,” says Gastón Pérez Rivera, singer for the funk-influenced group. The reference is on point: this group from Córdoba has an aesthetic that’s part sexy, part nostalgic, part neo-noir, part playful, and always carefully crafted. “Indie used to mean lo-fi, like, bands getting on stage with their guitars out of tune,” Pérez Rivera says. “We’re not that kind of band.” Indeed, they are not.

Arresting synth pulses, a New Romantic slant, and dance beats that rocket like a rollercoaster have made Bandalos Chinos one of Argentina’s most popular live acts. The band has refined their interpretation of pop across their releases: while their 2014 EP Nunca estuve acá belongs squarely in the synth-pop realm, on their most recent LP, BACH, the band expands their palette adding the high-pitched saxophones of sophisti-pop, and jolting, new wave guitars. On “Nunca estuve acá,” vocalist Goyo Degano says, “I’ve never been here,” a statement that could well be describing the group’s present mindset: This year they’ve played sold-out shows in their homeland, toured all over Mexico, and participated in collaborations with international artists. In that sense, they’ve never been anywhere for more than a few days at a time.

Delfina Campo’s bouncing indie pop tunes are centered around her soulful croon. Their roots may be in indie rock, but they’re enhanced by slick production values, with glossy synths laid down across rigid guitars. “There’s a renewal going on,” Campos says. “We can take the pop banner, because pop is wide-ranging and crossed by many influences.” That’s what makes Delfina Campos so unpredictable: her songs incorporate dozens of different sounds, making it impossible to predict where she’ll go from one single to the next.

This “obscure alt-R&B project”—which offers no clues about the people responsible for it—has materialized several times across the last decade. Eventually, listeners learned it was the work of Juan Mango, singer from indie rock band Usted Señalemelo, who has altered his approach on Ochocientos envolventes al sol, a synth-heavy, beat-driven bedroom pop LP on which he handled all duties: vocals, backing vocals, guitars, synths, programming, and sampling. As with much modern-day Argentinina pop, the record samples a variety of eclectic (and untraceable) sources. “Midi Thru,” for example, features dialogue from a spaghetti western over ambient techno synths.

El Zar’s music is eccentric: their songs can transform from swampy neo-psychedelia to shreddy new wave in less than a minute. “Círculos” opens with reverb-y guitars and distant vocals, then introduces a pulsing beat and trebly guitars for the chorus; it’s almost as if the two passages come from different songs. El Zar are more than capable of churning out pop hooks, but they often enlist the members of Bandalos Chinos for production and synth duties.

Ainda Dúo’s folk-pop tunes blur the identities of its two members. Both Esmeralda and Yago take turns on lead vocals, and often join forces—as they do in the cover of “Nunca quise.” Folklore implies a debt to kin, and Ainda Dúo enliven their electropop songs with traditional instrumentation and rhythms.

Rayos Láser scramble synths, sampled beats, and power chords to create heady pop songs with skipping beats and rubbery basslines. Their secret weapon is Tomás Ferrero’s vocals: his delivery is shy—almost self-deprecating—making the melodies feel warm and heartfelt. Three LPs in, Rayos Laser have recorded songs that range from straightforward indie rock to iridescent electro. “We don’t worry much in identifying with a specific genre,” read the liner notes to their latest album. A cursory spin through their discography reveals that to be true: everything from gentle bossa nova to pulsing synthpop turn up in their spirited songs.