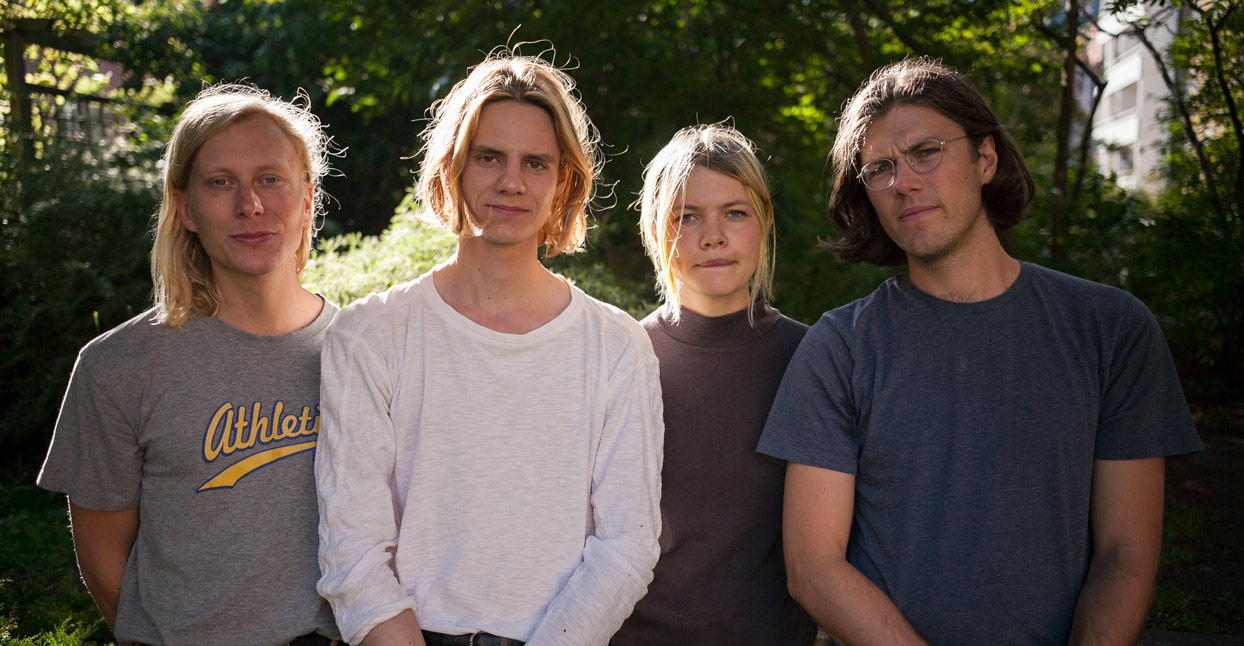 Thanks to ABBA’s 1974 win at Eurovision Song Competition, Sweden will forever be associated with winsome pop—a reputation that was enforced in the early 2000s when bands like Peter Bjorn and John, Jens Lekman, and The Concretes rose to prominence in the indie world.

But it’s rare for listeners to stick to merely one type of music, particularly with a smorgasbord of sounds a download or stream away. The playlist has only helped this all-you-can-eat mentality. When different forms of music are laid side-by-side, it becomes easy to see the connective tissue and find elements to appreciate across the creative spectrum. It also makes sense that Sweden’s current crop of musicians have been influenced by digital era genre elasticity. Sure, pop is still the country’s main musical export, but its purveyors are unlikely to fall into one category. Instead they’re experimenting with layering, introducing unlikely instruments and hip-hop beats into the mix, dipping into rock, singing in their native language, and tossing guitars in favor of laptops. From producers, to pianists, to performance artists, here are 10 of our favorite genre-gobbling Swedish acts.

Hater, in the band’s own words, make “romantic/edgy/soft/hard-pop.” “In a way it’s uplifting but the sound/vibe is also quite sad,” they explain via e-mail. The Malmö-based four-piece’s scrappy anthems offer cold comforts for the brokenhearted sandwiched between a Pixies-style guitar crush and Caroline Landahl’s sugar-dusted soprano. (Fitting, then, that their name was chosen for its bittersweet quality, not as an advertisement of their negative mental state.)

Johanna Nordstrom calls the music she makes as Jolympix “Afro-Viking poppy dub,” and that does indeed describe her band’s beat-heavy, blissed-out pop songs. It’s also, given the Jolympix frontwoman’s musical education, not entirely inaccurate. From a musical conservatory in Gothenburg to a favorite music festival in Mali (her attempt to go there one year was foiled by a countrywide political coup that left her and her bandmates in a locked-down hotel for a week), she’s logged thousands of miles.

“I played Cuban piano,” says Nordstrom. “And I went to my school’s World Music Department. We had to play all kinds of genres. Arabic music. Swedish folk music. After that we had a hip-hop club for some time. I played with reggae dancehall bands. There’s been a lot of different things. There’s things you like about different genres… Classical music, I suck at. I actually had a piano teacher in Cuba who laughed at me. I was so bad! But I wasn’t into classical music that much. Now I feel like I’d rather do my own project and maybe have a couple of things to do besides that. Last year I played with Jose Gonzalez. That was really nice. It’s nice to experience different things.”

Like Cigarettes After Sex for the Nordic set, Wy make melancholy, reverb-drenched guitar pop that they say stems from a desire to “kiss our wounds and play sad guitars until our fingers chafe.” The songs of the Malmö-based duo’s first full-length Okay are deliberately kept sparse, with a minimal percussion line and hints of keys—all the better to showcase vocalist Ebba Ågren’s limber alto. “My hands cannot hold the words from my tongue,” she sings on slow-burner “You + I,” “And I cannot speak enough / And I can’t shut myself up.” Her voice rising from whisper to wail, her phrasing is dramatic, but it’s impossible to deny the emotion behind her words.

As sir Was, Joel Wästberg makes atmospheric pop that plays like a minimalist art house dream. His debut Digging a Tunnel is littered with disparate sonic ideas, all immaculately stitched together and elevated with relentless rhythmic experimentation. A forlorn bagpipe. Staccato vocal delivery. Hip-hop beats comprised of piano and handclaps. Spoken word interludes. But as the former Jose Gonzalez drummer notes, despite working on his highly textured tunes since 2008, they almost didn’t see the light of day due to a lack of confidence. It wasn’t until a rough personal year pushed him into action that he completed 12 songs instead of the EP he had anticipated.

“I realized if I didn’t do this I was going to be a bitter person,” Wästberg explains. “My biggest fear has been being scared of being mediocre. Which is totally fine… I didn’t want to do it because if it wasn’t really good it was worthless. I couldn’t see it then, but looking back I realize that’s what my mind was. I was scared of making something people wouldn’t like. Either you win or you don’t do it. It’s not so productive. Many people do nothing because of it. For me, I was constantly working on my music. But I never really finished anything. Then I couldn’t have anything out. I couldn’t fail. Classic ‘Oh, it’s not finished yet.’”

When ShitKid (née Åsa Söderqvist) sings “Never seen a girl like me,” it’s not so much a dig at her fellow femmes, but rather a self-evaluation. The genre-gobbling artist swirls together punk, folk, pop, Americana, and few “la la la”s and a handful of electronic ones and zeroes into a lo-fi brew. The result is stream-of-consciousness rock that walks the line between fun and absurd—or, in the case of lyrics like “Maybe I’ll get a tattoo / That says I’m easily bruised,” both.

Johan Angergård and Rose Suau spent so many years sending letters between Stockholm and Detroit that when they finally met, collaboration seemed like a no-brainer—they already knew they were both middle children with similar star signs and interests in electronic music. As Angergård explains, their debut album Voyagers, full of heavy dance beats, reverb, and vocoder-embellished vocals from Suau came together seamlessly. In fact, working together had its benefits.

“It’s actually quite similar to working with someone from Sweden,” he reveals. “It’s such a close collaboration in the songwriting. It’s 50/50 in almost every song. It’s much more shared and done together. Usually when I do stuff I do all the production and play the instruments anyway by myself. When I write for [my other band] Club 8, Karolina [Komstedt] just shows up to sing. When I work with Rose, she’s also writing. We do that together. It’s easier because I get to do less.”

Elliot is very serious about his spacey synth pop, which feels like it was left out in the sun. That holds true even when the musician isn’t utilizing his deadpan inflection, delivering lines with a tongue placed firmly in cheek. (Just in case you missed his humor, please refer to his EP title, Jazz For Your Dad.) For a prime example of his twisted worldview, check out the EP’s centerpiece “35th Middle East Artspace in Humble Bragswik,” where, over reverb-swaddled psych-rock organs, Elliot name-checks both Michael Cera and Jesse Eisenberg and delivers the unforgettable line “All my friends are made in sweatshops.”

“I had had a child and I felt like, ‘Oh, am I ever going to be able to work again?’” she recalls. “Songs started coming in Swedish. They were so much better than the English ones. Probably because I haven’t spent much time out of Sweden. I’ve just been cuddling with my baby. The language took me closer to my work. It became more real.”

Hyvönen also found herself digging into unexpected themes—some of which she hopes to translate into English in the future. One song in particular, resonated with survivors of emotional abuse and was adopted (with her permission) by a local woman’s help hotline.

“They used ‘Fredag morgon’ because it perfectly describes the steps of a psychologically abusive relationship,’” she explains. “I didn’t think about that when I wrote it. Women are in tears in every concert when I play that song. Unfortunately, too many people have been there.”

Agent blå may feature sets of lovers and former lovers, but ABBA they are not—even if their career path seems equally charmed. The Gothenburg-based quintet started as a late-night joke before inexplicably crossing the line into reality, with several members learning how to play instruments after they joined. They played a series of open-mic nights, winning people over with their soring choruses, shoegaze-heavy guitar (as they call it, “deathpop”), and tightly wound lyrics that draw heavily on the themes of confusing, adrift teenage life. Directly after their first gig they were signed by iconic Swedish label Luxury—which meant before the band was even a year old, they had checked off a major bucket list item.

“We romanticized about being on Luxury before we started,” Felix Skörvald admits. “It was a dream to be on it. They came to us! That’s the weird thing.”

Their debut album is named Agent Blue, just to help step English-speaking fans through the meaning behind their umlaut-adorned name. But somehow, getting non-Swedish fans to pronounce it is still a tricky proposition.

“We even say it that way now,” adds Josefine Täck. “I have no clue why.”