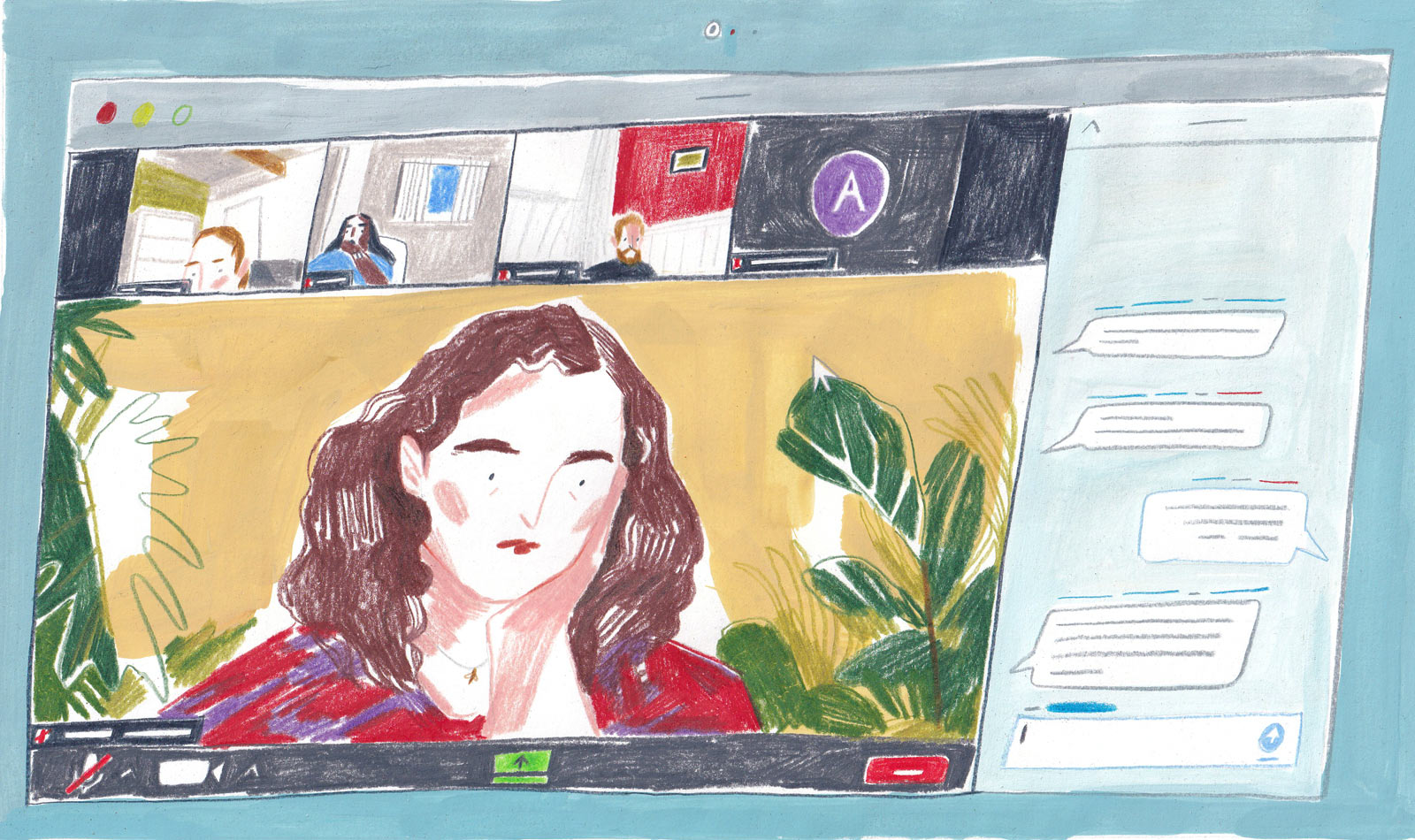 I can never forget how heavy my voice felt the first time I hated it—how the weight caught in my throat, how I dwelled on how deep it sounded, how much I wished it could sound like any other girl’s.

Before the summer of 2020, my voice was something I begrudgingly put up with. The way I saw it if it didn’t gnaw at me earlier in my transition, why would I ever feel differently once I started hormone replacement therapy? With time, though, it became an incongruity, a static reminder of a life I left behind while so much else was changing. Every time it felt as if I was speaking with an obtrusion in my larynx, dragging my voice to a frequency low enough to betray my ability to see myself as a woman, I recalled a fact I internalized early in my transition: HRT alone doesn’t affect trans women’s voices, when the vocal folds have been irreversibly thickened during puberty. If I were going to change my voice, I would have to take the initiative myself.

Once that need for change sunk in, I spoke as little as possible. My frequency of speech had already been eroded by an ongoing pandemic and isolation, mainly confined to video calls with distant friends, scant few in-person work shifts, and a domestic relationship I was unaware was on the brink of ending—another line of communication where I had taken its tenuousness for granted. What more harm could conscious vocal selectivity bring?

I allowed myself one exception in those blistering days of summer 2020: in the 15 minutes I took to drive to and from my job in Harvard Square, I would put on Twinkle Park’s As Much As I Forget and find comfort in the promise its warm, feminine synthetic voice held. Much of the power of Twinkle Park—the DIY pop project from a Washington-via-California artist under the mononym Hazel—lies in this crucial decision to make nearly all its lyrics delivered by the synthesized vocal software Synth-V. (Specifically, on As Much As I Forget, Hazel uses the vocal bank known as Megurine Luka.) In Hazel’s own words, using vocal synths became an exciting tool for her in controlling vocal nuances and was more freeing than using her own voice. I saw in that choice my own desire to feel unburdened by my voice and the confidence I needed to express myself.

In those withdrawn days spent craving something out of my reach, As Much As I Forget became a kind of surrogate voice. What made this album—and Twinkle Park’s music in general—so poignant was the vocal synth’s ability to speak raw, uncomfortable truths about mental illness, transition, feeling dissatisfaction with oneself, bonds shared with loved ones, and the need to let go of others you naturally drift from. Emo-tinged lyrics sung with a human voice could only get me so far; hearing those same kinds of unguarded, diaristic lyrics from a synthetic voice felt like an added layer of vulnerability, a stand-in singer unafraid to speak where a human voice might hesitate—where I often found myself hesitating.

During my morning commutes, where I realized I could fit the album’s first four tracks into those short drives, I clung to one line in the second song “Rotten Woman.” All the instrumentation—guitars, synths, drum plugins—suddenly drops out, leaving only a reverb-heavy piano and a distant cry from Luka: “I dream in polyphony/ Almost every night.” Every time I heard it, my thoughts drifted toward the many pieces of myself I dreamt of changing every day.

My voice was far from the only thing I knew needed work—and far from the only reason I fixated on As Much As I Forget—and yet, my voice became a metonym for everything I wanted to change about myself. I was experiencing “first-year HRT blues,” cursing the incremental progression of transition, questioning whether some of the trans communities I was involved with could adequately support me in the messy throes of self-doubt. Sometimes, I even felt plagued with uncertainty over whether transition would impart any kind of meaningful change. When you’ve only been taking estradiol for a year, it feels like both an eternity has passed and time has barely moved at all.

On a day when dysphoric thoughts rang louder than any external noise, I opened my phone to a locked Twitter account only close friends could see and shared a screenshot of lyrics to “As Much As I Forget,” the last song on the album, where I always sensed my breath catch: “I never dreamt my skin/ Would be this underwhelming to sit in/ For all the work I did/ To make my bones a home, they barely fit.” It was a sentiment my transfeminine friends echoed—that dysphoria could leave transition feeling like no more than awkwardly trying to reconfigure the physiology of a body already fully formed. And the pangs of dysphoric recognition in these lyrics became arresting until it became an excerpt that I would sing along with more loudly, more forcefully.

I would spend countless hours listening to “As Much As I Forget.” At ten minutes long, it eclipses the rest of the record’s track times. Its multi-part structure and recurring emotive guitar riff ringing out are the closest the album comes to wearing its emo influences on its sleeve, right down to Hazel openly quoting Brave Little Abacus.

The songs that precede “As Much As I Forget” are all problem assessments with lyrics like “I know I should stop ignoring things that stress me out/ I know it stresses you out/ Sorry for that” (“Aggravated Conditions), or “I will happily grind my teeth into dust/ Before I tell you I’m hurt” (“Rotten Woman”), or “Nobody to fix it/ I know I’ve got to learn” (“Batteries”). What I fixated on was how “As Much As I Forget” is a redirection that arrives at the very end of the record, a swirl of the album’s previous sentiments and refrains—a lyrical callback and leitmotif from “Aggravated Conditions” at one moment, a climatic polyphony of overlapping vocal tracks at another—before an emphatic, intentional drive toward change. I committed those final words, delivered by Luka like a mantra, to memory:

These lines don’t originate with “As Much As I Forget,” but rather “Legs,” a song from the 2018 Twinkle Park EP Never The Same Again, Thank Goodness. In time, I came to adopt this mantra as my own, silently repeating it to myself when my burdens grew too strong. This only became more frequent when I noticed that “As Much As I Forget” punctuates this refrain with one additional line of assertive certainty: “I will get out of bed.”

After taking it to heart, I knew nobody was there to fix my troubles for me. I knew I would have to take action myself.

In our first lesson, my voice teacher told me to begin not by focusing on pitch but on thinning my vocal folds. I ran through exercises that had me relaxing the folds until I felt the knot in my larynx loosen up, becoming physically lighter in an instant. As we talked, my teacher emphasized the significance of starting here, how control over vocal fold mass is critical for “vocal freedom.” By learning what this felt like and practicing speaking until the thinness became second nature, the moments where I slipped back began to feel foreign, the thickness in my throat so jarring that it was actively uncomfortable to stay there for too long.

I found myself practicing thinness in the quiet retreats away from crowded spaces, passively during remote work shifts, in the shower in place of singing. But most often, it was in the solitude of my car, driving to and from work, running errands, occasionally cruising just to make space for myself. In those instances, when I instinctively soundtracked my drives to As Much As I Forget, I tried to match my voice to Luka’s—my teacher had noted my knack for mimicry and my ability to learn from it—even the seemingly impossible highs. It was shaky, as trying to mirror a computer-programmed voice intrinsically is. But it was mine all the same. Here, my attachment to the album could allow me some form of tangible personal change.

Singing along to the album meant the lyrical repetitions—what few times they appear in Hazel’s oft-sprawling, chorus-free song structures—stuck out all the more with each time they left my mouth. I found one of these especially cathartic: the final lines of “Nonphenomenal Love Song,” where the song swells to a euphoric jangle pop finale, and Luka repeats, “I’m starting to feel small again.” In Hazel’s since-removed transcribed lyrics, this moment contained her sole editorial annotation, a bracketed emphasis of “[this is a happy lyric].” It had lodged in my head on initial listens, but I only truly understood it with distance, with intentional practice. I felt that comfort in smallness—in my voice, in my thoughts, in my presence. After endless days where the scale of my anxieties threatened to overtake me, feeling as small as I could felt like the greatest relief of all.

When I think of where I am now two years later—my skin more comfortable to live in than ever before, settling into the emotional peace and body that multiple years on HRT have afforded me—I can trace everything I’ve gained back to the earliest steps toward change that As Much As I Forget incited in me. I make concerted efforts to keep close to those who actively care for me, those I can trust to call on for support: the transfeminine friends I commiserated with in my earlier despair, a girlfriend who makes communicating even my most debilitating thoughts less daunting than any previous partners. I find freedom in controlling my voice through my own music, in the comfort of heavily distorting screams, until what I hear is no longer emblematic of my typical speech—expression where my everyday voice fails.

In many ways, I’m still intensely critical of my voice; it wavers far too often, flitting from a feminine glide to a thudding boom between sentences. Even when I keep my vocal folds thin, my resonance bright, my tongue posture high for pitch control, my voice sometimes feels like no more than a feint, a hollow imitation, passively maintained rather than my new normal. I’ve let my lessons slip along with my practice, going a full year between sessions, forgetting to keep up with my exercises and posture routine until I’m already berating how it sounds.

But I still return to As Much As I Forget and the promise it still makes. I know progress wasn’t immediate for me back when it first entered my life, and I know that two years alone isn’t enough to change everything for good. So I keep singing along, my voice light and thin, trying to hit those programmed vocal synth highs, never feeling more feminine than when I manage to mimic them with ease. And I still see in the album the girl I know I can be.

Natalie Marlin is a freelance music and film writer based in Minneapolis. She has contributed pieces to Paste Magazine, Stereogum, Little White Lies, and Bitch Media, and was previously a staff writer at the Boston music blog Allston Pudding. She occasionally appears on the Indieheads Podcast. She can be found on Twitter as @NataliesNotInIt.