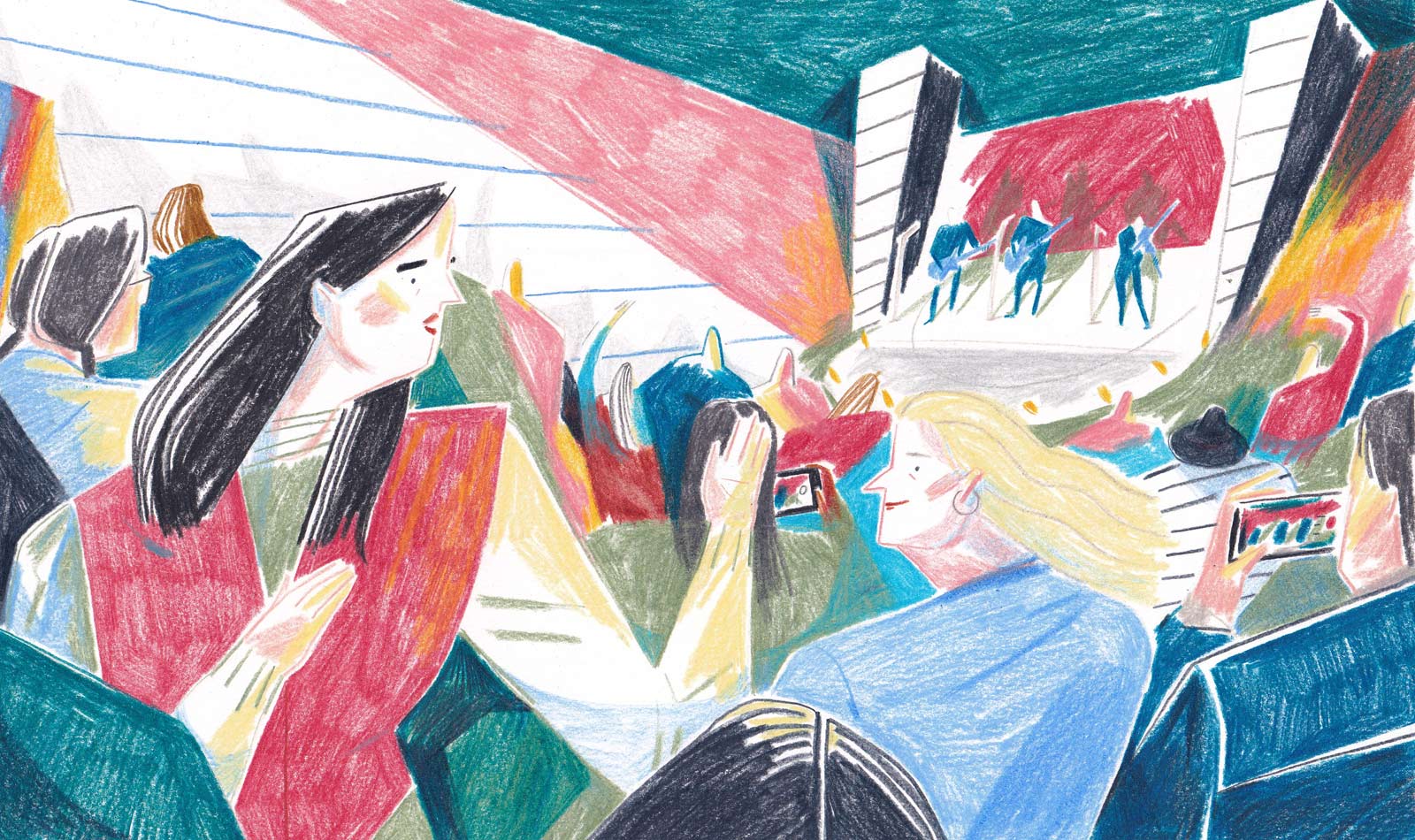 I’m beginning to think, though I’m open to sway, that even when we’re old and gray, I think you’ll see me and look the other way, just as you did, dear, only the other day. —“Don’t Be Mean” by The Raincoats.

It doesn’t matter when or how I first heard The Raincoats. As a teenager, the other people I knew that were into punk music were all men, and the only bands they knew of were those with men in them. After the Minor Threat and the Dead Kennedys and the Clash of it all, I was on my own, reaching into the recesses of Limewire to track down whatever mislabeled Slits songs I could find. Finding punk was easy, finding women in punk was hard, but you didn’t have to dig too far or too long before every road would lead to The Raincoats.

So what matters isn’t necessarily when they were one of 20 or 30 punk bands I fell in love with, but the moment they became a soundtrack to part of my life. Listening to The Raincoats today, I remember things that I lost. I think of friendships that have faded and places that don’t exist anymore. I think of my life before, and how that feels so far in the past it might as well have happened to a different person entirely. How I can barely relate to her now, but how I don’t exist without her. And I wonder if it’s just a part of getting older.

The Raincoats were always a bit of an anomaly, not fitting easily into definitions of punk, rock, jazz, experimental, or pop—they’re something of their own. The violin and guitar that seemed to tear away from one another, the bouncy, quirky rhythm section drawing it all back in. The brilliant vocal melodies that take the call-and-response lyric style of the Slits and build on top of it. The look of the band, which places them more in the realm of art students than punk rockers, until the sound shows us how they earned the punk moniker to begin with. The way all of these things together mean that they embody punk a little more heartfully, with greater sincerity than most.

Ana da Silva and Gina Birch founded the Raincoats in 1977. They still play shows sometimes, and I wonder what that’s like—to play songs from your past. I wonder if it’s like putting on a comfortable old sweater, or if all you can think of is how it doesn’t fit anymore. I wonder if it helps you learn to love who you once were, or if all you can think of is how far away you’ve gone. When I saw the Raincoats live in 2011, it was nothing short of magic. I wonder what it’s like to make magic with someone you’ve known for longer than I’ve been alive.

The Raincoats play the songs you would think The Raincoats would play, and they’re wonderful. There is nothing better. It’s my favorite band and my closest friends, and we are not thinking about the worst things that have ever happened to us, and none of us know how bad things will go in a month, a year, or 10 years. We don’t yet know that we will never make it. We don’t know, and it wouldn’t matter if we did, because we are at the show, and we are all falling in love, or out of love, with someone.

The setlist varies only briefly from The Raincoats (1979) and Odyshape (1981) hits to veer into Looking in the Shadows, the album that they released in 1996, 12 years after the band first broke up. The song is “Don’t Be Mean.” Sung by bassist Gina Birch; the electropop vibes of the recording don’t fully translate to the live show, but both versions are top-of-their-game Raincoats. Experimental format, pop sensibilities, and killer lyrics—this is one of their best. In 2011, it’s everything. In 2022, it’s everything.

After the concert, we go home together. We make changes together. We go out together and we stay in together. Yet, we’re both feeling separate pain. Our differences are insurmountable. We believe different things about the world, and these are things that cannot be reconciled. Before we even begin, we are breaking, breaking, breaking apart. There is nothing I can do to stop that, and the worst mistake I make is to try.

At the time, I think the song that defined this budding love affair is “In Love.” A blushing, agonized confession of hidden feelings, the song hinges on a sawing, creaking violin riff. “In love, it’s so tough on my emotions!” At the moment, it makes sense; but looking back, I can see that our song actually is “Don’t Be Mean,” which finds the protagonists years—or even decades—away from their short-lived, misbegotten love affair, knowing now that it never could have worked, asking only for an acknowledgment that both parties suffered. “You left and I admit that I behaved badly/ But you see, at the time/ I loved you so madly/ Don’t be mean!”

We broke up, and it was awful. We broke up, if we really even dated, at all. I am an outsider, I am a fighter. I am out, and maybe she never wanted to be. Maybe I never asked. Maybe it was easier not to know.

From my place in the future, I look back at my younger self and say, “You’d save yourself a world of pain if you just walked away. This is the moment you should go. Nothing after this will be good.” And maybe my younger self can even hear these portents of doom. But at that moment, I will never be able to walk away. I’d have never saved myself that broken heart. It had to be broken to move on in life, but knowing this now doesn’t change that it hurt, and feeling remorse doesn’t change the past. Nothing can.

Time passed. I moved from city to city. Many friendships faded or exploded or grew too painful to carry on. Some endings you regret, some you don’t. People drift away from you, and you drift away from them, too. Some bonds strengthen, and others can’t hope to survive. In the end, some people just love the idea of you more than they can ever love you, and it hurts, but it’s just how people are. You will find the ones who stayed through your worst moments and you will keep them closer to your heart than you could have before. Time takes from you, but it gives you things, too. It can give you healing, and it can give you love.

I look back at myself and all I can see is someone who was in pain. It’s hard for me to feel anger toward her, though I sometimes feel regret. Sometimes, when I think, “Don’t be mean,” I’m asking myself not to be mean to her. To myself.

The record I bought at the show, I ultimately gave to a friend. It reminds me of sitting in a field and ripping the love letters my first girlfriend had given me into pieces, letting them float and drift over the air on a dreamy, sunny afternoon. I have always wanted to not keep the things that cause me pain, to not be tied to a possession the same way I’m tied to people and places, and sometimes things just feel like they don’t belong to you anymore. The record, the affair, the feelings, the place, the time. None of them belonged to me anymore. For someone else, they’ll mean something else, and that is as it should be.

If you are lucky, you will become many different people in your life, and it is a blessing. It is a blessing to gain perspective, and to grow, and to become something new. It’s a blessing just to live, whatever that means. And you will. You will live your life, and it will be a beautiful life, but all of that living will hurt, and it will break you in some ways, and you will bend closer to the ground, and time will take its toll.

Pain doesn’t go away, but it does become something else. The variations are endless. The intensity ebbs, or it’s only replaced by a different kind of aching. New pain becomes old pain, or maybe it ceases to hurt you at all. Maybe it teaches you something, or maybe it’s the one thing that you can never bring yourself to take a lesson from. Like a drop in a glass of water, it dilutes all throughout your system, and it bends and strengthens you, and it becomes a part of you. But most of all, it changes you.

Birch says something else at the very end of the song. Something that I sometimes forget. Reflecting on “Don’t Be Mean,” I consider it a plea for understanding, a breakup song long after the breakup has stopped hurting so badly, a forced smile asking someone to crawl out of their own hubris for long enough to see that people make mistakes and no one meant to hurt one another, they just did. We just did. Yet, in all of this, our protagonist says one other thing, just as important as anything else in the song.

Sara Century is a writer who works in many different mediums. She’s been a freelancer through platforms like Adweek, IGN, Polygon, SYFY, and others, and her fiction has appeared through The No Sleep Podcast, Fiends in the Furrows, and Pluto in Furs, among others. She’s the co-founder of the Decoded Pride speculative fiction anthology and a co-host of the Bitches on Comics podcast. She regularly contributes to Manor Vellum and Comic Book Herald. Twitter: @saracentury