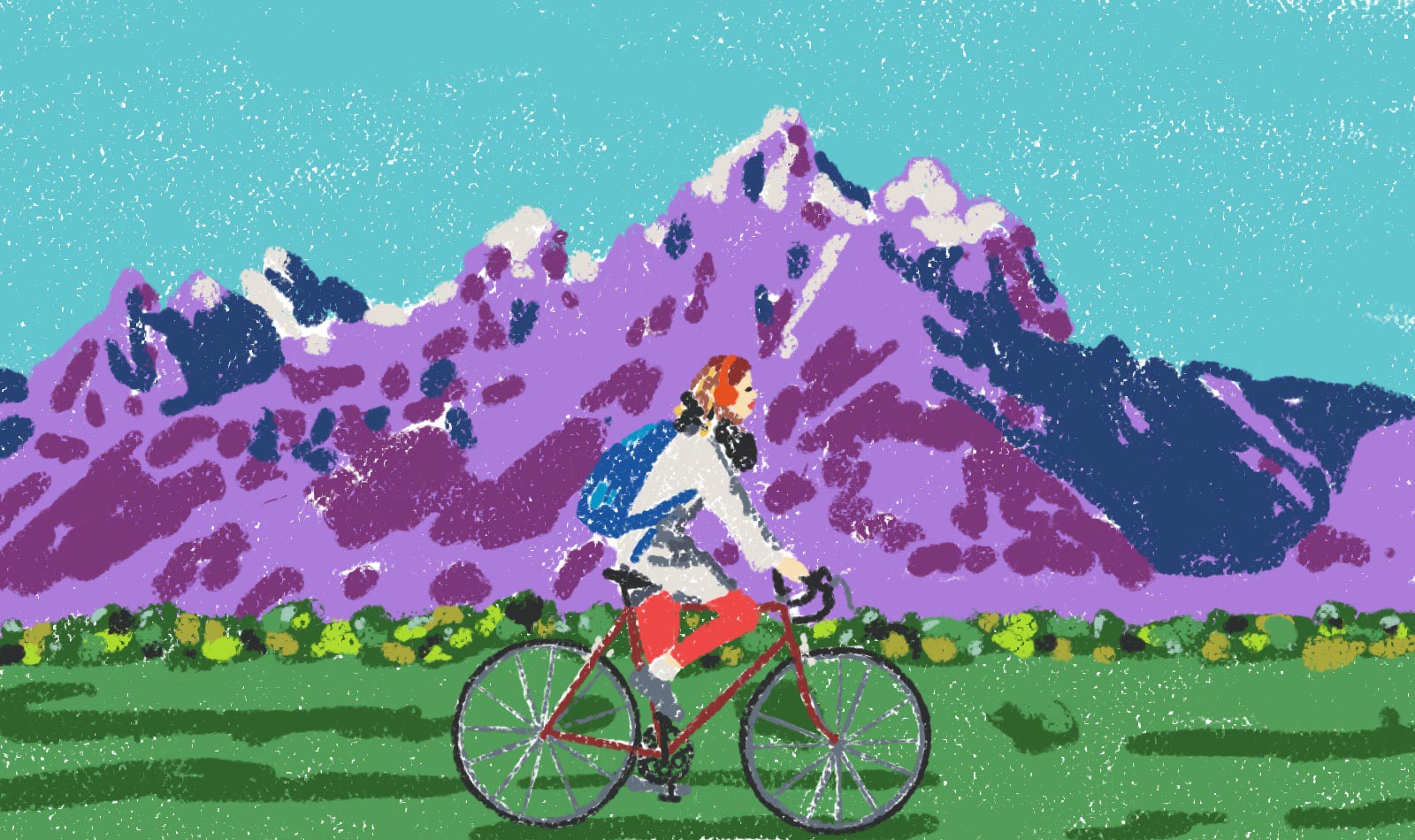 I will never forget the day David Berman died, because the very next day, I almost followed him. On August 8, 2019, I was pedaling down one of Chicago’s dim, pothole-studded streets, listening to Purple Mountains on a disintegration loop. A right-hand turn I’d cut a thousand times before became a near-fatal, inch-wide error that catapulted me over my handlebars, knocking me out cold on the flank of a busy thoroughfare. At least that’s what the ER nurse told me after I jolted awake, my clothes snipped into filets, electrode sensors glued to my chest.

I could hear my heart stuttering louder than the squeaking heels and moaning patients that crowded the unit. I tried to parse out the words being spoon-fed to me—brain bleed, nystagmus, hematoma—but they failed to fit within my scattershot blueprint of the last two hours. When I locked eyes with my brother, who was standing shell-shocked by my side, I thought to look at my face and see what it had to tell me. My left eye was the color of a rotten plum, blood vessels splayed across my eyes like mortars on the Fourth of July. Pieces of concrete were busy making a home in my cheek.

Revisiting the last sounds I heard before crash-landing in John H. Stroger Hospital was all I could think to do as I finally laid to sleep. I stared at the popcorn ceiling of my brother’s apartment, face swollen and brain hazy, listening to David Berman sing through an album that still rings like last rites. One song, in particular, brought shape to a night as murky as the bruises splayed across my body.

“Nights That Won’t Happen” is the penultimate track of Purple Mountains, an album that has become mythologized by the events that happened thereafter. The events, well, we all know what they were. David Berman always had this uncanny knowingness when it came to death, especially his own. I yearned for that sort of certainty, however bleak, and I hoped that he held some answers for where I went during those two pitch-black hours.

What David failed to mention in “Nights That Won’t Happen” is that only some of the dead know what they’re doing. He doesn’t account for the freak accidents, the cruel departures, and the shortened farewells. On August 7, David Berman knew exactly what he was doing, leaving the world with a calendar’s worth of nights that won’t happen.

What disturbed me most about my near-death experience wasn’t what did happen, it’s what was absent. When I was knocked out, I didn’t have any grand hallucinations of glittering light or angels with foghorns lining a road of pearls. It was black—a colorless void. And I still wasn’t convinced that I had surfaced. Just as David felt following his 2003 suicide attempt, I felt like I was dead. My only tether to any earthly realm was Purple Mountains, the last living talisman of a man I had never—will never—shared a room with. Through the album about imminent, inarguable suicide, I learned to live all over again.

David didn’t write these songs to drag others down to his depths. He did it to provide a salve for solitude, assuring us all that no one is alone when flirting with oblivion. The irony of death, especially suicide, is that the troops rally only when there is someone to mourn. The dead can’t feel the warmth of a vigil or the firm grip of a reassuring hand. The one blessing of a near-death experience is the opportunity to bask in the afterglow of grief.

I was regaled with four slices of pie, myriad wellness checks, more candles than I could count, one hand-drawn card, and two lawyers’s phone numbers. I witnessed a community nudged into the orbit of my own suffering. These gestures often led me to wonder how David would have felt if he had read the essays or heard the cries or felt the shape of the hole he left in the world. But those questions don’t matter, because the only one who can answer them is gone.

I tried to repay the karmic debt that I accrued by avoiding death, something of a toll to pay. A week after the night on the concrete, a coworker and I gifted a case of beer to the restaurant workers who called an ambulance while I was knocked out. When I ambled into the bar, a hostess billowed with tears.

“I was so sure you were dead,” she whispered through bitten lips. She said it with such conviction that I had to pinch myself into believing that I really wasn’t dead. I was bewildered and alive, standing in the middle of a brewpub at two in the afternoon.

I didn’t have the heart to tell the hostess that “dead” was exactly how I felt. Contrary to my own brush with mortality, David Berman’s death was no surprise. In fact, it was a known quantity just waiting to finish its equation. I felt like an unfinished problem—I hadn’t died, but I still hadn’t come back to the living either.

In hopes of coming back to earth, I started a ritual with David. I would walk up and down Western Avenue every day and listen to Purple Mountains, trying to commune with Him. Sometimes, I would plead for his help. Other times I would wish that he was still here, making songs to help navigate what I was going through. He became something like a patron saint of morose souls. Like Saint Jude, but more impossibly tragic.

“Nights That Won’t Happen” became the only appropriate song for this phase of my life. That night, I didn’t know what I was doing, and I’m still convinced that dumb luck and a half-inch were the only things that bailed me out of a shallow grave.

I didn’t find many answers during these walks in my Berman-soundtracked half-world. At least, I didn’t find the answers that I wanted. More often than not, I would reckon with the parallels between myself and David. I squared up against my own purple mountains and dark depths: the bottomless bottles, the sleepless nights spent chain-smoking and counting leaves from my front stoop, the chemical-grade dissociation. I was an open wound bleeding on everything, toeing a line that David had not only known but drawn.

When asked what his headstone would read during his final Reddit AMA, David Berman wrote, “HE WAS CRESTFALLEN UNTIL HE WAS ABLE TO RATIONALIZE IT AS A GREAT MISTAKE.” It was a disarmingly thoughtful response, almost too perfect to be an off-the-cuff quip for the sake of a promotional lark.

While the slinky melody and earnest poetics of “Nights That Won’t Happen” will always buckle beneath the weight of David’s demise, it is hopeful in its own macabre way. The song preaches an end to suffering, a long exhale released after a lifetime spent strapped to an oxygen mask. But that feeling of relief is possible in living, too. I found it somewhere between me and the concrete.