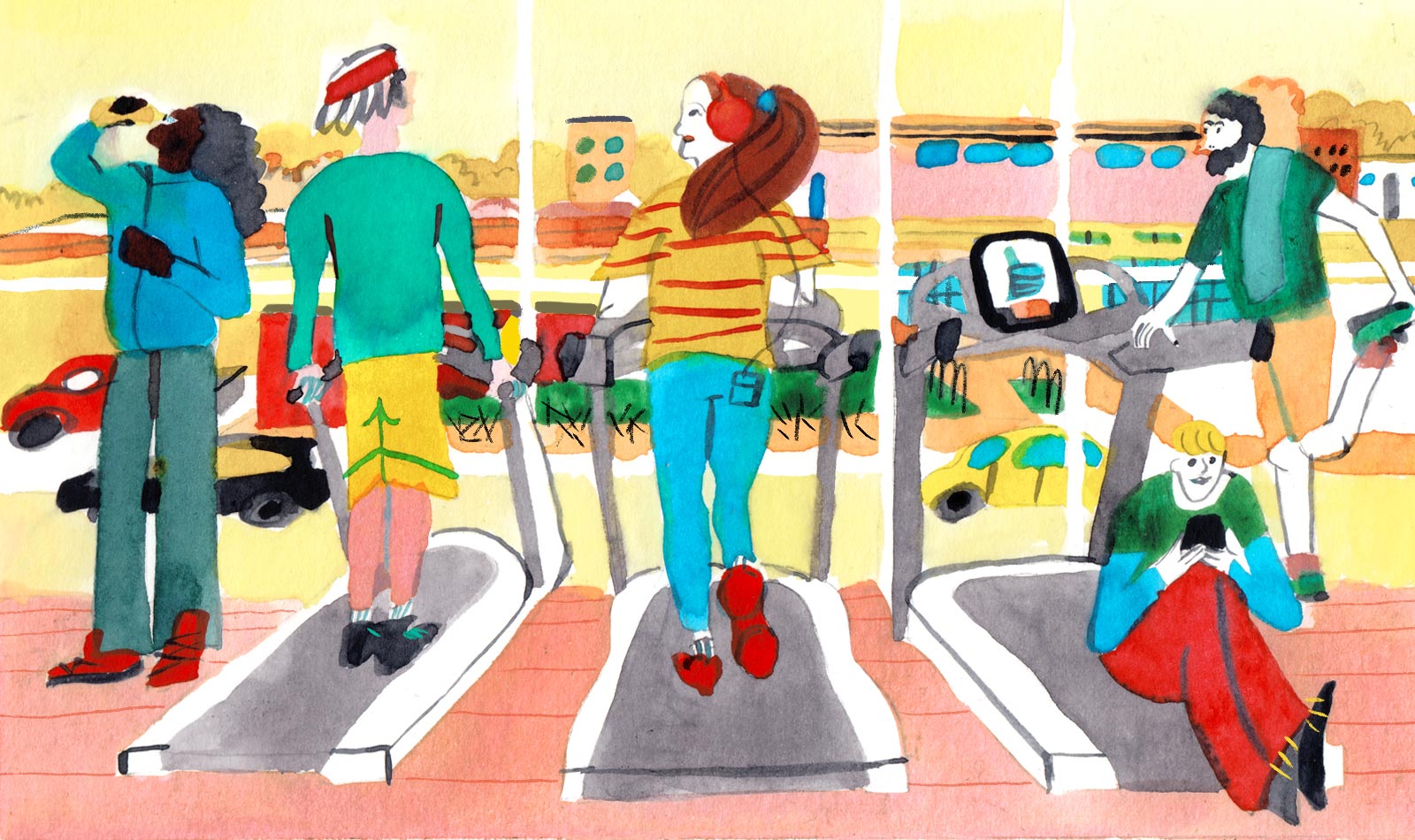 Nashville was mostly fine. The days were muggy in that suffocating Southern way that makes the very thought of wearing jeans agonizing, but I can’t remember being unhappy about it because I was only unhappy in the ambient, unspecified way that comes with being 23. I fancied myself a self-loathing nihilist, but I was probably just bored. I wasn’t “in the waiting room of my life,” as I’d phrased it in one particularly melodramatic journal entry. I was just working retail.

I’d taken a job in a touristy gift shop because they’d hired me, which I considered a logical enough step in my career plan because I had no career plan. I had no career plan because I had no anything plan. The only plan had been to run a hard reset on my life, which I was now doing, and which I’d felt inclined to do after spending a non-zero number of nights languishing on my father’s couch with Scarface on TV, zonked on a cocktail of existential malaise and red wine by the time F. Murray Abraham gets thrown out of the helicopter. Unable to rationalize the optics, I’d upended the whole shebang.

I was in Nashville because it was the first city where a friend of a friend happened to have a spare room. If a different friend of a different friend had a different spare room in a different city, I would’ve gone there, but they didn’t. I’d poured my net worth into a silver Nissan Altima I named “The Sex Machine,” which was definitely a joke since I was having no sex whatsoever, barring a single Tinder misadventure shortly after my arrival. I did not mind any of this terribly. I was content to skim over the surface of my life.

In Nashville, with the retail job, in the friend of a friend’s spare room with the bed I spent a sweaty afternoon haphazardly assembling (a state which would only be exacerbated by the aforementioned Tinder misadventure), my life took on a harmless but distinct shallowness. I adopted a simple routine that demanded minimal actual decision-making and could be thoughtlessly enacted. Had I been able to gin up the emotional effort to do so, I would have loved it.

In any case, it suited me, and I found it reassuringly incremental. Get up. Put on gym shorts and one of four company shirts, usually the navy one with yellow writing that fit better than the cream-colored one with the red writing. Drive to work. Change into jeans in the parking garage – this involved much thrashing around in the backseat of The Sex Machine, which remains the only action it ever saw. Work, ideally with the two cool coworkers and not the one who fancied herself a manager because she knew where all the buttons on the register were without looking. Lunch at the nearest Panera: large Diet Pepsi (my only vice, not counting all the other ones), toasted steak-and-cheddar sandwich, every time. I needed the protein, after all. I’d started running.

I’d run before Nashville, but now I was on the treadmill at the nearest Planet Fitness every day after work in my rattiest t-shirt, eyes forward, legs pumping, impossible Southern sun glinting off The Sex Machine in the parking lot. I really was pushing the limits of my endurance (read: knee cartilage). Pure physical focus happened to fill a number of vacancies made newly available by reducing my life to its most essential parts, and I wasn’t in a position to negotiate. Running swallowed up a few hours each day. It was something to do. It required minimal brain power. It made my legs look fantastic. Not one personal record went unshattered, and I broke most of them to Cobra Man.

Finding Cobra Man was one of those lucky rolls of the algorithmic dice I’d rather not admit to, but that’s what it was. My standard-issue post-indie-kid taste was largely insufficient for exercise purposes, so I’d turned to what I can only describe as training montage rock. I was binging ‘80s action movies on the side, and it was not hard to put two and two together. You want to kill that last mile? Play the Rocky IV score or the fight songs from Ladyhawke, the latter of which, let’s be clear, is “noted for having one of the worst sound scores for any film,” according to its Wikipedia page. Play “You’re The Best” by Joe Esposito and songs with titles like “Iron Eagle (Never Say Die).” Mile time beaten, guaranteed.

It was dumb. It also worked. I’d surrendered all snobbery in preservation of the seamlessness of the routine and inadvertently gave myself right over to shlock and sparkle. I summarily discovered that there was nothing I could not achieve (at least on the treadmill) with a playlist of songs culled from every overwrought training montage and/or fight scene prior to, say, 1995. Doing this torpedoed the algorithm’s understanding of what I wanted, and it spit out Cobra Man. Have some oddball “power disco” out of L.A. At least this was made within the last 20 years, you absolute weirdo. “Toxic Planet” kicked in around mile six on a Wednesday, somewhere between Frank Stallone and total oblivion. That was it for me.

“Toxic Planet” has everything. It’s 132 bpm of kick drum and adrenaline. It has exactly two lyrics—“We’re coming to your town” and “You can’t fuck with us”—which sound equal parts triumphant and deliberately vague for maximum motivation. A Nile Rodgers-y guitar line dips in and out periodically. The synths are produced to sound like someone’s playing them while soaring in a hovercraft over the grid from Tron, sprawling digital vistas on all sides. I’m pretty sure they sample a screeching eagle just after the halfway mark, although I can’t prove it. I hope I’m right.

Cobra Man is a band I feel like I made up, but I do believe that their so-called power disco is deadly serious. You don’t make multiple albums of training-montage-rock-meets-uncut-cocaine-synthwave while holding a white dove and a straight face in your press photo packet because it’s all a big joke you’ll drop tomorrow. You don’t write and perform it this well unless you’re listening to its founders and evaluating what makes it tick on its own terms. I refuse to believe that ironic detachment is the reigning sensibility here. They wouldn’t sell it so effectively if it was.

Would I have come around to Cobra Man if I wasn’t in the Dolph Lundgren–iest phase of my life? I don’t know. Maybe not. I don’t regularly seek out music for vanquishing your enemies by smashing them between your throbbing, oiled-up pectorals. Power disco, training montage rock, whatever we’re calling it—it only works if you give yourself over to its high-gloss masculinity that’s somehow as primal as it is ornate and spectacular. I do not want to feel like a complicated woman with a rich interior life when I listen to Cobra Man. I want to feel like shirtless Jean-Claude Van Damme in his absolute prime, throwing a knockout punch while in a full split. I want to feel like I own one of those crazy bill counters from the “Push It To The Limit” montage in Scarface. I want to feel like one of The Lizzies, the all-girl gang from The Warriors that very nearly kick The Warriors’ ass, only this time, we kick their asses. I want to feel fucking invincible, and I want to beat my mile time.

This sounds ridiculous because it is ridiculous. I think all deep emotional connections to art are a little ridiculous, even ones far more profound than this one. They’re dependent on taste and heaps of psychological projection and, in this case, good timing and a treadmill. Our connection to art is ultimately ephemeral because we’re ephemeral. It’s all pixie dust in the end, which thankfully makes it no less unassailable when we’re living it. I know that’s true because Cobra Man and my sport headphones have remained a powerful combination long after leaving Nashville and once again fleshing out the contours of my life.

But that’s how these things go. The view out the gym window and the running shoes change, I get faster or slower, but that’s it. Yeah, yeah, the song remains the same. But in this case it did! And several hundred miles later, its ridiculous, full-throttle, training-montage-in-space, all-chrome-everything power disco effect has yet to wear off. Thank God for that.