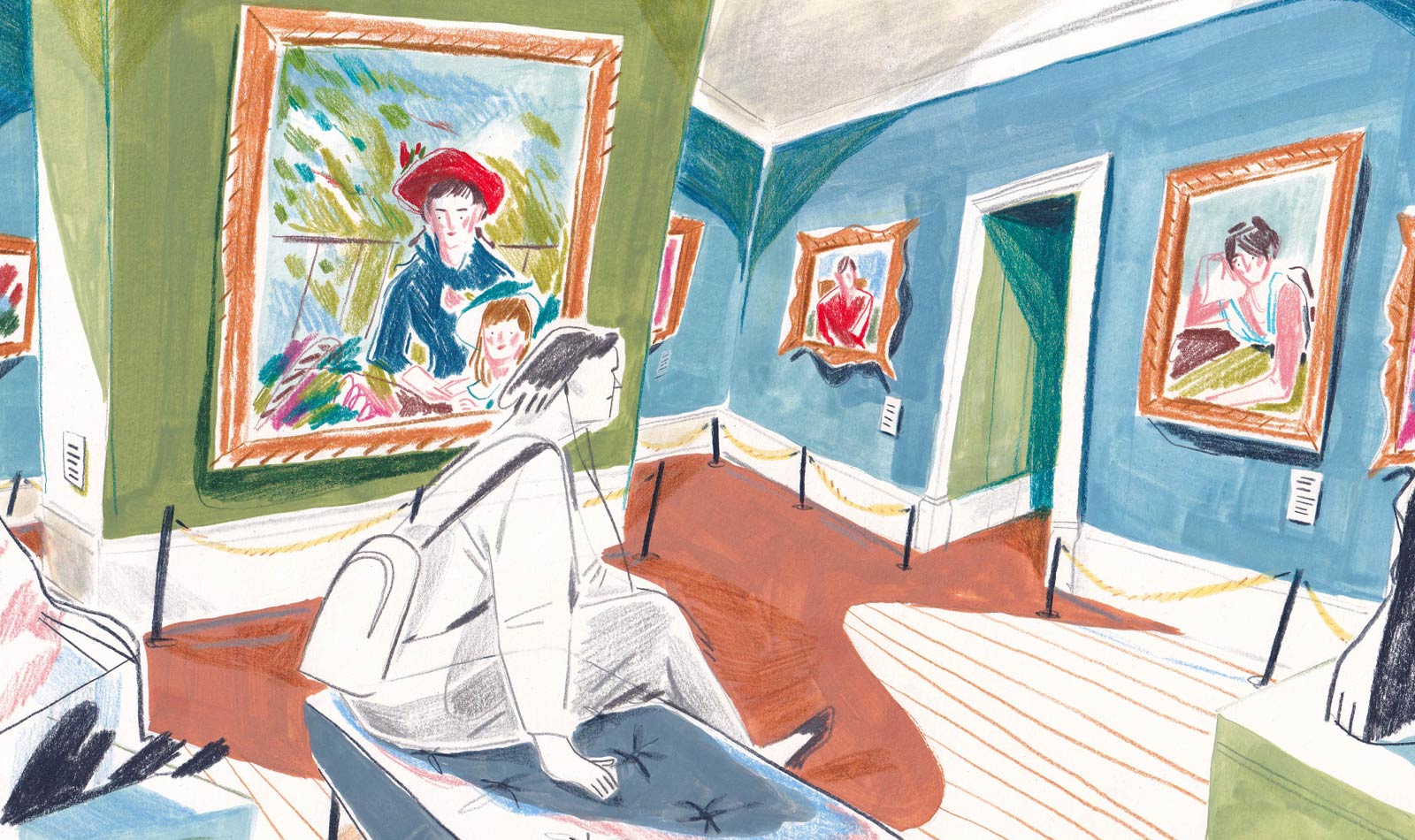 Nominally I was in Chicago for fun, having tacked a few days in the city as a lark onto the end of a trip that had already taken me to Philadelphia, New York City, and, bewilderingly, Delaware. Traveling on a whim wasn’t unusual for me in those days as I was constantly looking for excuses to not be in the Bay Area, where I lived and professed to hate, convinced my problems were a matter of geography rather than the simple fact that it wasn’t the place I hated but myself. But even before the plane touched down at O’Hare, I knew it had been a mistake. I didn’t belong in Chicago. I didn’t belong anywhere anymore.

I was practically a ghost by then, in the truest sense of the word: trapped between worlds, unsure of how such a predicament came to be, and desperately grasping at anything that might whisk me back to a time before the quotidian art of human connection became a mystery I could no longer solve. The truth is that I was depressed, but I would not give myself that excuse because I could not conceive of myself as a depressed person. There was no reason to be sad. Nothing terrible had happened to me. I had a job and money, friends who loved me, opportunities galore, freedom beyond freedom. I could go anywhere I wanted, do anything I pleased. Anything except be happy, apparently. Bourgeois ennui! The most pointless of all afflictions, and the least justifiable.

Unable to identify an acceptable cause for my sadness, I felt the only thing more pathetic than being depressed without reason would be acknowledging it. So I told no one, covering up my pervasive loneliness with travel plans and rock shows and after-work happy hours with colleagues who didn’t suspect a thing. Yet I was secretly obsessed with my own degradation; certain that, no matter how much I achieved or how in control of my life I seemed to be, everyone thought of me as a dumb party girl who drank too much and cared too little. No one to take seriously, not someone to keep around. The likeliest possibility is that nobody was thinking about me at all and this is only what I thought of myself, but that is what made it true.

Whatever. If happiness is a choice, as the platitude goes, I would simply choose to pretend I was happy until it became true. So I went to Chicago, one of my favorite American cities filled with some of my happiest memories—and after this trip, one of my saddest.

It was early October and the city was on the cusp of tipping over into cooler weather, but the day still clung to the muggy dregs of the Midwestern summer. As a hot rain pissed down from a soupy grey sky, I took shelter in the sterile atmosphere of an upstairs wing of the Art Institute of Chicago. There I contemplated an 18th century pastel of a smirking woman in a dress so low-cut her breast was nearly visible, a blue parrot plucking at the gauzy neckline. I snapped a photo of the portrait for Instagram and doodled the words “Cool Slut” over the top, the name of a Chastity Belt song from their 2015 album, Time to Go Home. I hadn’t stopped listening to the record since arriving in Chicago and it was playing on a loop in my headphones as I wandered around the museum. “I made choices/ Choices without reason,” sang Julia Shapiro, her voice low and flat over droney guitars as softly blurred as the woman’s pale face.

Chastity Belt are an all-female rock group—guitarists Shapiro and Lydia Lund, drummer Gretchen Grimm, and bassist Annie Truscott—from Seattle, Washington who formed in 2010 in college as a joke, but then they became real. Over the past decade, the band has released a string of EPs and critically-acclaimed LPs, garnering praise for music that’s tranquil and pretty while still being punk, with lyrics equal parts nakedly vulnerable and bitingly funny. I had been familiar with the band for years—I even DJ’ed a Chastity Belt show once in Los Angeles—but only started paying serious attention to them in 2017 upon the release of their wonderful third album, I Used to Spend So Much Time Alone. That led me to listen to their sophomore record, Time to Go Home, which is when I truly connected with the band.

Though I’ve been writing about music for a long time, Chastity Belt mystifies me. I’ve never any idea how to describe them or who to compare them to, even if they are just a rock band like so many other rock bands—and somehow unlike any of them. Chastity Belt’s music feels more sourced from the void than birthed from the pages of rock magazines or boxes of 7-inch singles, their songs less a construction of identifiable parts and more like wet splashes of unprocessed feelings. I guess that isn’t saying much. What is music anyway but the ineffability of human emotions made manifest so anyone could hear it and know it was real. This is what it feels like. This is what it sounds like.

Time To Go Home sounds like it was recorded in a rain cloud, the band a quivering blur of jangly brightness ensconced in a silvery mass of reverb and echo. In reality, Time to Go Home was recorded in a deconsecrated church, accounting for the natural thrum of the songs and the quiet-yet-booming quality of Shapiro’s singing. But there is a certain sanctity about Time To Go Home, if not outright brutality, in how the songs honestly recount the emotional aftermath of trying and failing to find meaning in our daily lives; Shapiro nonchalantly singing about shame, self-loathing, and self-destruction over music that feels as mutable and incorporeal as weather—something that cannot be grasped, only experienced.

In some ways, Chastity Belt seem to be one of the most misunderstood of modern rock bands. Much of the press around them focuses on their so-called “Millennial” take on the female experience and their use of sass to defuse heavy topics like casual sexism. But I’ve always thought of their records as unbearably sad, and none more so than Time to Go Home. Though many of the songs recount drinking out of boredom or getting so trashed the room starts to spin, what the band returns to again and again is the search for meaning and connection—“Wanting something that would cut deep,” as Shapiro sings on the title track. This is an inherently sad act, because it implies that neither of those things are to be found in the present. Beneath the record’s placid surface, all the “I don’t care’s” and “Why do I try’s,” burbles an existential dread that the sum of our interactions, all of our sorrows and joys, ultimately adds up to nothing. Maybe if you just have another drink. Or just fuck one more dude. Or go to one more party. Ha ha ha.

But perhaps I am misreading Chastity Belt. It’s possible. I couldn’t even read my own self when I was listening to Time To Go Home obsessively, and that extended to how I interpreted the record. It wasn’t until writing this essay that I realized a lyric in “Joke,” which I always heard as “We act so hard and then we cry,” is actually “We laugh so hard that we cry.” That puts a different spin on things. Where I heard a song about lacquering over pain with faked well-adjustment, the band themselves were actually delighting in the joy of having each other—that sense of companionship that was absent from my life, but was always present in theirs. Because what is a band anyway but the mystery of human chemistry made manifest so anyone could hear it and know that it was real. The existence of meaningful connections can often feel illusory; the existence of the rock band is proof that it is not.

Before I left Chicago, I met a musician friend for an afternoon drink at a top floor bar at a fancy hotel. At the time, he was in a band that I loved, but a lot of people hated for reasons I never understood. He doesn’t play in that band anymore. He’s a lawyer now. After we’d finished our beers, he brought me to the windows to show me the view of Lake Michigan, but there was nothing to see; just clouds of grey mist pouring across the expanse of it, obscuring both water and sky. The next day I took the river architecture tour of the city, another “fun” distraction from the emptiness I felt inside. Alas, the seasons had changed overnight and all the glorious buildings of downtown Chicago were obscured by a fog so bitter it froze me to the bone, the type of cold that settles in so deeply you doubt you’ll ever be warm again. Afterwards I went to a coffee shop and wrapped my icy fingers around a tepid cardboard cup, willing myself to defrost. It took hours.

While it would be nice to say there was a moment after that trip to Chicago in which the gloom suddenly lifted from my life and all my sorrows were taken from me in a single burst of brilliance, the reality is that it took years; a slow and lengthy process of rebuilding my sense of self that could not begin until I understood that depression isn’t always an abyss into which you sink. It can also be a lake upon which you float; all your achievements and all your failures bobbing around you like equally useless buoys, suitable only for latching onto while waiting for a shoreline to appear. This is probably a very common type of depression and maybe the most insidious: a sadness so banal that it is invisible not only to the world but to the one who suffers from it, who will deny the validity of their feelings until all meaning is sapped from their lives, until meaningless itself is the only constant. That is how you become a ghost. That is how I did. But Chastity Belt always knew the score. “When the fog meets the water of your lies,” sings Lydia Lund on “Lydia’s Song,” her sole vocal contribution to Time to Go Home. “What is real is what you feel/ It’s real.”

Mariana Timony is a music writer from California. She is a senior editor for Bandcamp Daily and author of a sporadic newsletter about music and life called The Weird Girls Post. Twitter: @marianatimony