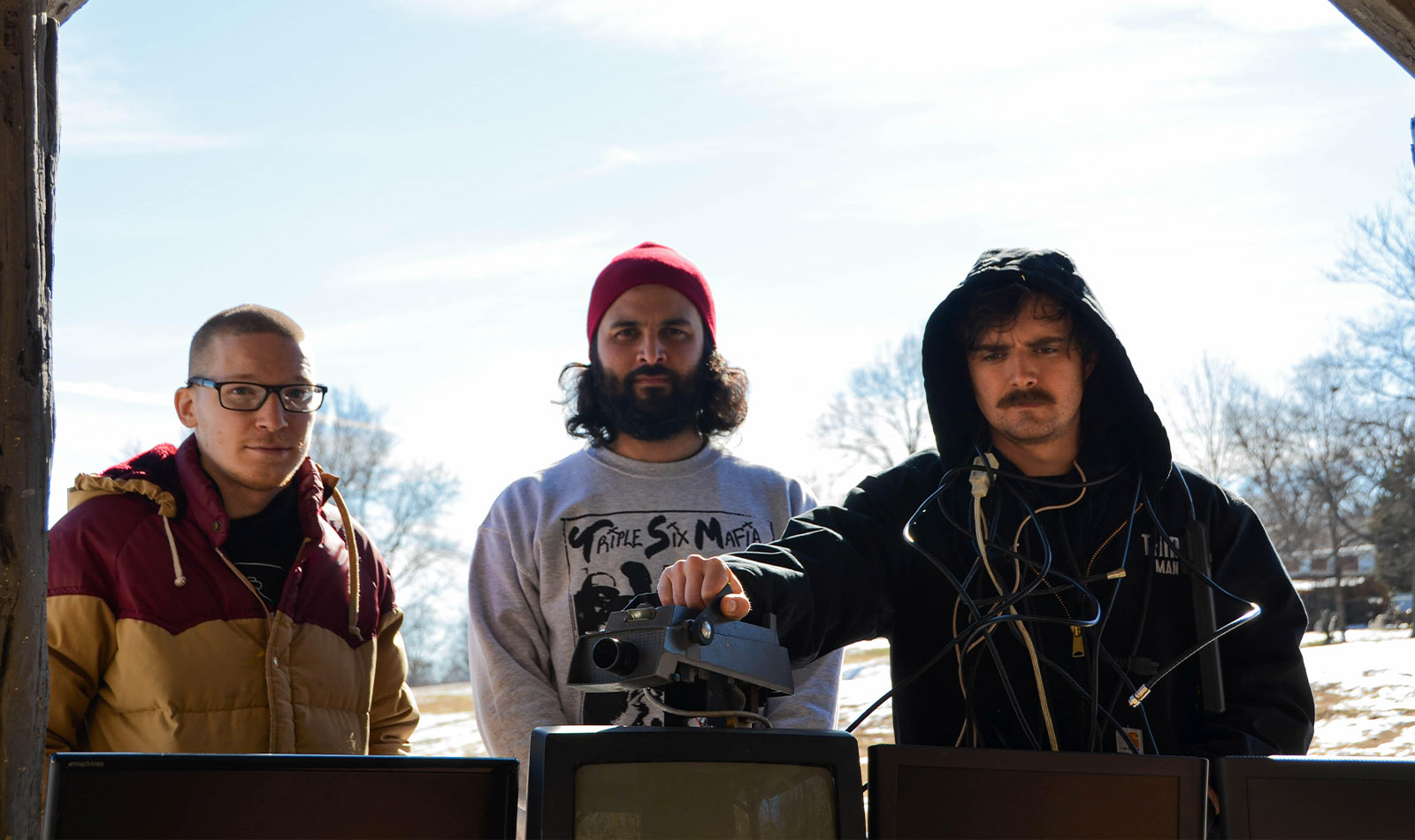 The Lurch, the new album from Nashville trio Yautja, is an absolute monster. For 45 minutes, the band careens between tempos both elephantine and frantic, between time signatures both head-nodding and completely baffling, between lockstep rhythms and overlapping chaos, sounding every bit the three-headed monster. Each member is a vocalist as well as a gifted, creative composer, and it’s easy to imagine the music spiraling out of hand were it not tethered by the undeniable grooves that form The Lurch’s backbone. Despite the near-constant shapeshifting, each song is bound by infectious pulses—moments of catchy restraint amid lurid noise and fluid drum fills—and this marriage of organization and disorder highlights how unique Yautja has become some eleven years into their lifespan as a band.

Despite associations with fundamentally opposed speeds, the metal/hardcore punk subgenres of grindcore (extremely fast) and sludge (extremely slow) aren’t quite the odd bedfellows their prevailing tempos suggest. Sludge is there in grindcore’s brutal breakdowns, while grindcore’s fill-heavy drumming style has wormed its way into sludge’s playbook and many grindcore bands will pepper in a seven-minute-long plodder to offset the onslaught of sub-two-minute assaults on their albums. But an outright hybrid of the genres—one that’s impossible to chart out via “sludge part” versus “grind part” diagrams, that carries unmistakable traces of both in its DNA at all times—is what The Lurch achieves.

Yautja set grind and sludge on a collision course from day one with the four original songs on their 2011 demo, which, despite being much more straightforward than those on The Lurch, have evolved over time as they’ve sporadically popped up on ensuing releases. “After playing those songs live for several years,” says bassist Kayhan Vaziri, “they kind of took on a different form. Us three playing together for years, you learn how people flow, and how things flow rhythmically.”

It’s readily apparent how much Yautja’s increased chemistry over the years has yielded a more distinctive sound. That, more so than any clear attempts to steer the band’s sound in one direction or another, is how the trio wound up with The Lurch. “The music has changed slightly—songs have gotten a little longer here and there, there’s less of the grind, straightforward punk/hardcore-type songs—but as far as our method of songwriting, I feel like it hasn’t changed too much,” says Vaziri.

Yautja formed as a trio in 2010 with Coburn and guitarist Shibby Poole playing a few gigs in late summer with a different bassist before Vaziri joined that fall. Their first release, a demo recorded and mixed by Poole, surfaced the following May—more out of necessity than anything else. “Because we were playing shows and starting to tour a little bit, there was kind of a sense of wanting something to sell on tour and have some sort of documentation,” says Vaziri. Outside of the four aforementioned originals, there’s also a cover of Black Flag’s “Modern Man,” taken from the band’s mid-’80s peak of hardcore/sludge fusion.

Technically, The Lurch is only Yautja’s second full-length album. It arrives seven years after Songs of Descent, which makes the three years that elapsed between the demo and the debut album seem insignificant in comparison. “When we did Songs of Descent, we’d been a band for so long, and had been writing for so long that we had a lot of material to work with,” says Coburn. With the exception of lengthier compositions “Faith Resigned” and “Of Descent,” the band clearly opted in favor of their grind-ier side; the debut may cram in five more songs that The Lurch does, but it’s also nearly 10 minutes shorter.

By Yautja’s lengthy standards, their next release arrived at warp speed. The Songs of Lament EP showed up 20 months after Songs of Descent, and as suggested by the respective titles, the two are intrinsically linked. “With the EP, all those songs were written before Songs of Descent came out—maybe all but one,” says Coburn. “We had written all those songs together and we talked about whether or not we should make it a longer record, but I like the way it turned out with the sort of companion record idea.” While it wasn’t exactly premeditated, Songs of Lament stands out as grimier and more caustic than its predecessor, thanks in part to Poole’s input, says Coburn. “Shibby’s always been really good about hearing a final product, and hearing where interludes might make the album feel more complete—capturing the vibe throughout.”

Make no mistake, Descent and Lament definitely bring the sludge, but Yautja’s grooviest gargantuan of an early track comes (fittingly) from a 2015 split with Boston blackened doom greats Fórn. That song, “Processed,” offers shades of the more minimal, syncopated structures found on The Lurch, despite being a little less vibrantly unhinged. “We recorded that for Songs of Lament, and it didn’t feel like it fit,” says Coburn. “It was a newer song, and it didn’t feel like the same vibe.”

“Having [the Audiotree Session] on our Bandcamp has been really helpful, like that’s a lot of peoples’ introduction to us,” says Vaziri. The Chicago-based label’s in-studio sessions have often proved bountiful for bands who may be lacking in high quality concert videos or live recordings, and Yautja’s no exception. The energy on songs culled from their earliest releases (and even a very early version of The Lurch’s “Undesirables”) is more palpable here, and the subtle-to-substantial alterations made by the band feel like the work of a single, powerful entity that’s still learning the capabilities of each of its limbs. “A lot of people tell us that they like the way that the Audiotree set sounds better than any of our LPs, which I think is fair,” says Vaziri. “It was cool because it was live, right in the middle of a tour, so we were pretty warmed up with that set, it was just the set we were playing that tour, and we thought it’d be cool to immortalize those renditions of those songs.”

Whereas Songs of Lament felt almost more like a full-length than an EP, 2017’s Dead Soil has the true makings of an odds-n-sods collection: three new studio cuts, three live recordings of older songs, and a cover. In particular, the live updates on Descent’s “Denihilist” and “Faith Resigned” are an apt measuring stick for Yautja’s trajectory, drawing both already-lengthy songs out into even richer compositions. “I like the live versions on Dead Soil a lot,” says Vaziri. “It turned out super well. It wasn’t something that we asked or set out to record live, it was just someone who recorded our set at a show we played. He just sent it to us like, ‘Hey I recorded y’all’s set, it sounds good.’”

“We’ve never been a band that plans out like, this is the full-length, these are the songs,” says Coburn. “Even with [The Lurch], we went into the studio and recorded an hour of music and didn’t know what would end up on the record and what wouldn’t. One of the songs on the split with Chepang, we had intended on making the record—”The Kindling.” But we had to shorten the record, because it definitely wasn’t gonna fit on a single LP, and I don’t know if we’re a double LP band yet, or anything.”

Considering the pyrotechnics of Nepalese grind greats Chepang, the decision to keep the full-speed-ahead d-beat madness of “The Kindling” off of The Lurch proves yet again that despite the lack of a plan, Yautja know where their songs fit best.

As it turns out, those previous live recordings did more than just showcase evolved versions of early Yautja tracks: their differences in sound and energy from the studio material actually dictated the course the band chose for The Lurch. “I think there was an unspoken idea that we wanted something a little more hi-fi than what we’ve had in the past—capturing it live, and making it sound how we sound live,” says Vaziri. “Everything we record has been done live, at least the initial tracking, but I think there was a conscious effort to be like, ‘Hey let’s do something different, let’s try to step up the quality here.’”

Recorded by Scott Evans at Steve Albini’s Electrical Audio studio in Chicago, the album marks a noticeable step up in audio clarity compared to all of Yautja’s previous work, which is crucial in illuminating its complex web of riffs, screams, beats, and noise. Noting the maze-like “Catastrophic” in particular as a “real, real fucker of a song,” Coburn feels that the album contains the band’s most “difficult, ambitious songs,” and Vaziri agrees. “There were songs that we had been playing more regularly but once we got in there and put them under a microscope, we might’ve been more critical,” says Vaziri, “Like, ‘This is hard to nail, harder than I thought to get it like I imagine it.’”