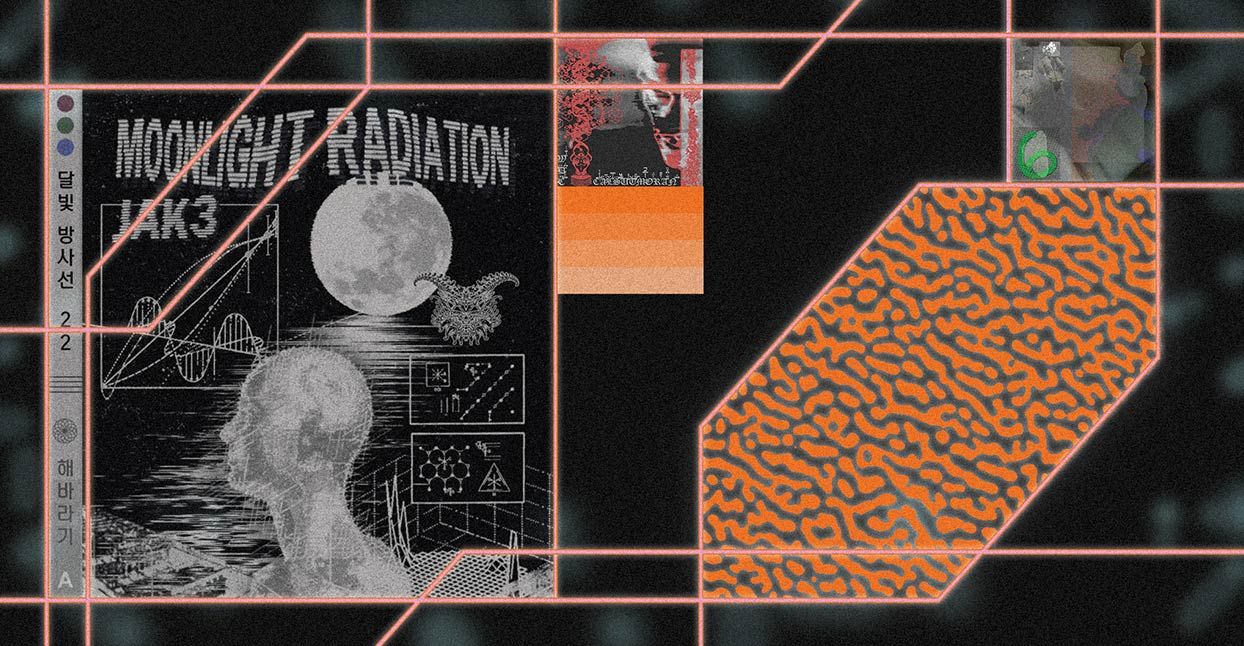 The members of the hip-hop collective Waistdeep Clique hail from all over the country—from Hanover, Pennsylvania to Yuma, Arizona, to many points in between. But all of them have a fealty to the sound of ‘90s hip-hop, filtering it through modern production techniques, contemporary internet culture, and the bleak political present. The resulting sound is a kind of update on the cyberpunk aesthetic, one that owes as much to Memphis rapper Tommy Wright III as it does to ‘80s and ‘90s electro and techno.

Like nearly all of the producers in Waistdeep Clique, founding member DRAGG found early success producing beats for DOOMSHOP Records, a label that releases contemporary music heavily inspired by ‘90s Southern rap artists like Lil Grim and Three 6 Mafia. But DRAGG soon realized that his musical taste was broader than the Memphis revival that DOOMSHOP was known for. “I’d strayed away from making Memphis rap records in late 2014,” he says, speaking from his home in Wichita Falls, Texas. “I could tell that I wouldn’t stay still for long with that type of style. I wanted to start my own group that would have its own style.”

DRAGG started combing the internet for like-minded artists who had worked with DOOMSHOP in the past, but who weren’t trying to fit into its specific niche. In mid-2015 he came across CALSUTMORAN, a then 16-year-old producer from Rochester, New York who had just begun leveraging a life-long obsession with extraterrestrials to create alien, psychedelic beats. “I was making music for probably just a year before Waistdeep got started,” recalls CALSUTMORAN. “DRAGG hit me up and said he had a group that he was starting, and he wanted me to be a part of it.”

Once CALSUTMORAN joined the Clique, he and DRAGG began outlining Waistdeep’s aims and ethos, sculpting its aesthetic even as they discovered their own. “We talked about ideas and how we’d present ourselves,” says DRAGG. “We wanted to put our music in people’s faces, have quality cover art and quality music.” But just as DRAGG and CAL were making plans to recruit new members, unexpected events began pulling DRAGG away from music. “In 2015, life kinda hit me,” he remembers. “I was really distracted. I didn’t work on music a whole lot for all of 2016 and most of 2017.” In DRAGG’s absence, CAL took over Waistdeep’s recruiting duties. Luckily, he already had a producer in mind to be the group’s next member.

Just a few months before joining Waistdeep, CALSUTMORAN had been contacted by AGNARKEA (pronounced “anarchy”), another then-teenage producer. One night, while taking a break from making beats at his home in Richmond, Virginia, AGNARKEA listened to CALSUTMORAN’s music, and was blown away by what he heard. “I sent a message and he actually responded, which was crazy,” says AGNARKEA. “I told him he was an inspiration.” That message quickly blossomed into an online friendship. Soon the two producers were collaborating, closing the distance between Rochester and Richmond with a few clicks.

That general process repeated itself over the next two years, as more and more artists were brought into the fold. Producers FVDXVD, GONE, and JAK3 were invited into Waistdeep Clique. “[Waistdeep] was more in line with how I want to make music, as far as bringing in different elements of other genres,” says JAK3, whose house in Hanover, Pennsylvania has become ground zero for week-long, collaborative music making, with various members making the pilgrimage from their respective cities to create together face-to-face. The fruit of one of those sessions became KWANTUM ENTANGLEMENT—a three-way collaborative EP between JAK3, CALSUTMORAN, and AGNARKEA that, with its overdriven bass, hallucinatory digital textures, and seamless blend of hip-hop and dance music rhythms, captures the sound of Waistdeep Clique as well as anything in the catalog.

“Collaborating over the internet is cool, but I think it’s just a starting point for building connections that can result in actually working together in person,” says AGNARKEA. “There’s a whole separate magic that happens when you’re in the same room.”

“It’s a brotherhood really,” adds DRAGG, who has slowly reintegrated himself into the collective. “We don’t operate as a music group or as a band, we just have like minds. We don’t necessarily check with each other on how we do things. We’ve grown way past that. We just know that we all trust in each other.”

“It’s like knowing someone without even meeting them,” says FVDXVD, who, based in Yuma, Arizona, lives prohibitively far away from the others. “It’s like if you have a family member that just happened to move out of town—you know them already, you’re family, they’re just not living in your area.”

Waistdeep Clique are still far from a household name. Many of its members work day jobs to support themselves. But their level of online success and the money they’ve managed to make via the internet has bolstered their confidence in their ability to one day pay the bills with art alone. “We just want to be able to pour our time into the shit we love,” says AGANRKEA. “We’re not asking to be a billboard smash hit. But we figure that we’re young, we know what we’re doing, we’re innovative. So [living off of music] is definitely in the cards.”

Here are just a few standout releases from the Waistdeep vaults.

Black Helicopters is unquestionably AGNARKEA’s opus, a mind-boggling statement of innovation and concept that finds all of the young producer’s strengths working together over an anxious backdrop of conspiracy theories and the fractious husk that is contemporary America. But radical/info.vol6 is impressive for the way it crams that same number of ideas into a short period of time. Clocking in at just 13 minutes, the album is a pastiche of retro electronic dance music genres, gene-spliced with hip-hop and injected with a level of emotional impact that would give the moodiest singer/songwriter a run for their money. From the twitchy boom of “see me as some blunder” to the uneasy abandon of “bloodibloogiwoogi,” to “o ye”’s drowsy threat to float away, radical/info.vol6 maintains a celestial sparkle even as it pulls listeners through the queasy neon glow of the underworld.

CALSUTMORAN took his name from an internet conspiracy theory that states that an alien intelligence by that same name will make itself known to those who imbibe a certain amount of an over-the-counter medication. Appropriately, the striking, self-designed cover art for CALSUTMORAN’s albums contains haunting depictions of those otherworldly beings. It’s an aesthetic that carries over into his music: TELEPATHIC HELIX sounds like Memphis trap as heard from the far side of the galaxy. Applying a bevy of effects and production techniques to sampled clips of audio and field recordings, CAL offsets rap’s earthly grit with eerie noises that sound like mumbling machines and sentient slime, creating groaning songs that feel like they’ve been irradiated by some dark intergalactic energy. On tracks “Believe,” “Master,” and “Witch Brain,” CALSUTMORAN develops his ideas element by element, easing listeners through the barrier that separates one dimension from the next.

Though he’s just 19 years old, JAK3 has become a go-to producer for many rappers in the Memphis revival movement. Combining a blown-out sound with smoother vaporwave and drum and bass, he fills the blank spaces between bass hits with abrasive industrial noise. On his latest release, Moonlight Radiation, he sculpts his low ends into a smoother shape, using the relative sparseness of boom bap drum patterns to convey a sense of isolation. The atmospheric pads and haunting keys of “Heroin Bum” create a feeling of desolate emptiness, while the slow-motion eruption of “2 FAKE” punishes with grim, oversized bass beats. With features from frequent DOOMSHOP collaborators and Waistedeep members alike, Moonlight Radiation is JAK3’s most mature and most cohesive effort to date.

Hailing from Yuma, Arizona, FVDXVD (pronounced “faded”) produces atmospheric, bass-heavy beats that convey the harsh expanse of his desert home. Across multiple releases, he’s sculpted his heavily distorted sound into the shape of everything from hip-hop instrumentals dark enough to score a Memphis séance to dub tracks that ooze through time like resin. On Spiritual Awakening 432Hz, FVDXVD dials back the distortion, allowing stretched-out samples to float above the kick drums, while leaving a healthy void between each song’s moving parts. Standout cuts like “Deep Sleep” and “Elevate” feel at once lithe and lugubrious, seeming ready to evaporate into the sky even as tremors of thunderous bass shake below.