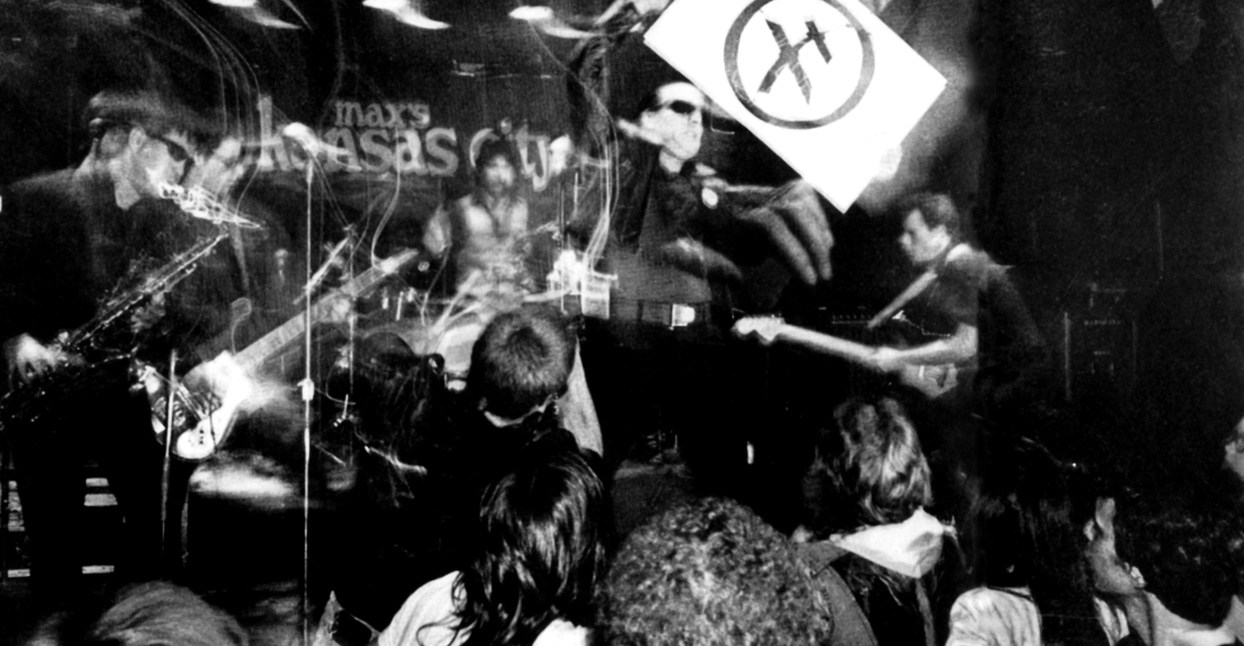 There’s everyday weird (say, flat-earthers), there’s rock weird (think Syd Barrett), and then there’s Von LMO. Obscure even within the context of the no wave scene with which he was vaguely associated, Von LMO (born Frankie Cavallo in 1951) is one of underground rock’s true oddballs.

After playing in small-bore bands Funeral of Art (with one-time Roxy Music and Sparks bassist Sal Maida) and the somewhat Velvet Underground-ish Kongress, and establishing himself as a downtown New York artist and scenester, Von played with legendary noise/jazz guitarist Rudolph Grey in the radically under-documented Red Transistor before launching a solo career in 1979.

Von LMO and his band managed one totally bonkers LP, the self-released Future Language, in 1981. Featuring a band dressed like Devo’s even-stranger cousins, Future Language is a rolicking slab of sax-afflicted noise rock, complete with Von declaiming on flashbacks, leaving your body, and delivering future language to the people. After playing a show at the Palladium in New York—which drew roughly an eighth of the people the venue actually holds—the promoters demanded their money back, prompting Von to vanish from the scene for the next 13 or so years; he reappeared in 1994 with Cosmic Interceptions, a record of old demos and a few weird electronic tracks; and again in 1996 with the phenomenal Red Resistor, four tracks of epic scuzz.

Enter Weasel Walter, the free jazz/black metal/no wave artist and historian, a long-time fan who helped reissue Future Language on the Flemish Masters label in 2001. He became pals with Von LMO, and upon moving to New York in 2009, began to examine Von’s discography and old sessions. Earlier this year, Walter remastered and aided in the rerelease of Von LMO’s three extant albums, and produced and released two vintage live sets and an “imaginary album,” a notion that fits right in with absolutely everything else about Von.

“Von was always a fringe figure,” Walter says. “Through the years I’ve reached out to him as a fan. He’s always been kind of a mythical beast. He’s a character, and you never know if he’s telling you the truth or not about anything. And he has his own personal mythologies. He’s a somewhat complicated guy in that regard.”

Below, Walter walks us through Von LMO’s curious catalog.

Blown-out, honking, psychedelic noise punk, primitive and glorious and mid-fi. Both sets feature Von LMO on vocals and guitar, Juno Saturn on sax, Kip Kuba on bass, Lou Rone on guitar, and Herman “Ziggy” Lindgreen on drums. The 1979 set is a decent audience recording (dig that one guy in the crowd who is really into it!). The 1980 set is a decent soundboard recording, and features a cover of Cream’s “Sunshine of Your Love” and two screamy radio spots. “Red Transistor was done by mid-1978,” says Walter. “Von’s live band right after was a stable collection of these guys that he knew. Kip Kuba in the South Brooklyn scene for awhile, in these weird peripheral CBGB’s and Max’s Kansas City bands—and an awesome bass player to boot. Max’s booker and art director Peter Crowley was managing Von at this time, and these sets were likely tapes for a planned live album that never got off the ground.

A hidden classic of quasi-no wave noise rock. Not as raw as the live material, the album has gained a weird reputation (probably due to the outfits on the cover) as something of a proto-synth punk album, which is odd. While there’s a bit of electronic frizzle on there and Von’s voice can sound like an alien who learned English mostly from people yelling at him, this is a pretty standard two-guitars-bass-drums-sax punk record. And yet, the vibe remains…disquieting. “‘Future Language’ was kind of his big push,” Walter says. “Peter Crowley was behind that. And they were really trying to to push it. I think there were TV commercials for the Palladium show. You can speculate where the money was coming from all you want, and you’re probably half right or maybe right on the mark. But the thing didn’t really go over, and basically Von had to skip town.” The album came and went without much impact and soon, Von LMO was done for a bit.

After Von returned to the scene in the mid-’90s, he released Cosmic Interception, which is comprised of demos from Future Language and some new experiments with electronic music. “That was how Von came closer to my orbit,” Walter says. “Peter sent my zine a copy of Cosmic Interception.” In some ways the weirdest record in the Von LMO discography, Cosmic Interception features two jolts of oddly excellent, deeply repetitive electronica recorded entirely by Von, two remixes of the title track, and those six demos from ‘79, including the gnarliest cover of “Shake, Rattle and Roll” ever put to tape. It’s a head-scratcher for sure, but as Von puts it, “We transmit, you intercept.” Message received, man.

“Someone had the idea to try to capitalize on a slight resurgence of interest in [the band] Red Transistor, so Von attempted to make a record sort of in that vein, and I think he succeeded,” says Walter. “The saxophone player, David Tamara, he plays with Mark Edwards pretty frequently. He’s still kind of in the mix… Von in the mid ‘90s was just kinda scraping up these weird random musicians in the New York scene. That was his band. And they went into the studio and they made this crazy, noisy, epic record. Those four tunes have kinda been the basis of the new Von LMO set.” The 1996 album Red Resistor (no attempt to hide the influence) features four long blasts of savage, heavy noise rock, including the sitcom-length hurricane “X + Z= 0.” For once, Von LMO’s timing was perfect—this thing would have fit right in on noise rock labels Touch and Go or Amphetamine Reptile (or on the Japanese heavy psych label P.S.F., for that matter). It remained obscure at the time, but got a comparatively giant bump in visibility in September 2004 when it was declared Album of the Month by no less an expert on acid and punk than Julian Cope, on his Head Heritage website. A masterpiece of dunder-headed thunder, Red Resistor still stuns.

This promo-only collection from 1999 features an EP’s worth of five studio tracks from 1998, as well as various ‘79 and ‘94 songs. “It never had a cover,” says Walter. “As far as I know, it was just a replicated CD in a jewel case that was being sent around for promo purposes. The whole thing with Von is he likes all these confusions about things, and he kind of encourages it. It was like Von trying to be commercial, or something weird like that. I mean, it’s totally perverted and bizarre.” The 1998 stuff is all strong and mostly in the Von sax-noise-punk tradition, including a noise-blast cover of “Purple Haze.” The exception is the oddly terrifying “Nobody Wants To Play With Rose,” which is almost soft rock—acoustic guitar, smooth jazz sax, and all. This is actually a decent place to start for an overview of the whole Von experience.

This odds-and-ends roundup includes two Funeral of Art songs (the totally great Roxy rip-off “Mannequin of Love” and the unfortunately named space rocker “Zivoid is Cuming”), and a few songs from the short-lived Von LMO project Refrigerator. “When the Munster Records version of Future Language came out, there was this bonus LP disc of all these random sessions,” says Walter. “I compiled all the remaining tracks that I could find by Von and added them to that and  tried to master it because it was totally just all over the place, key-wise, volume-wise. It’s basically what’s left of Von’s discography.” Not a great place to start, but if you have heard everything else, you probably need it.