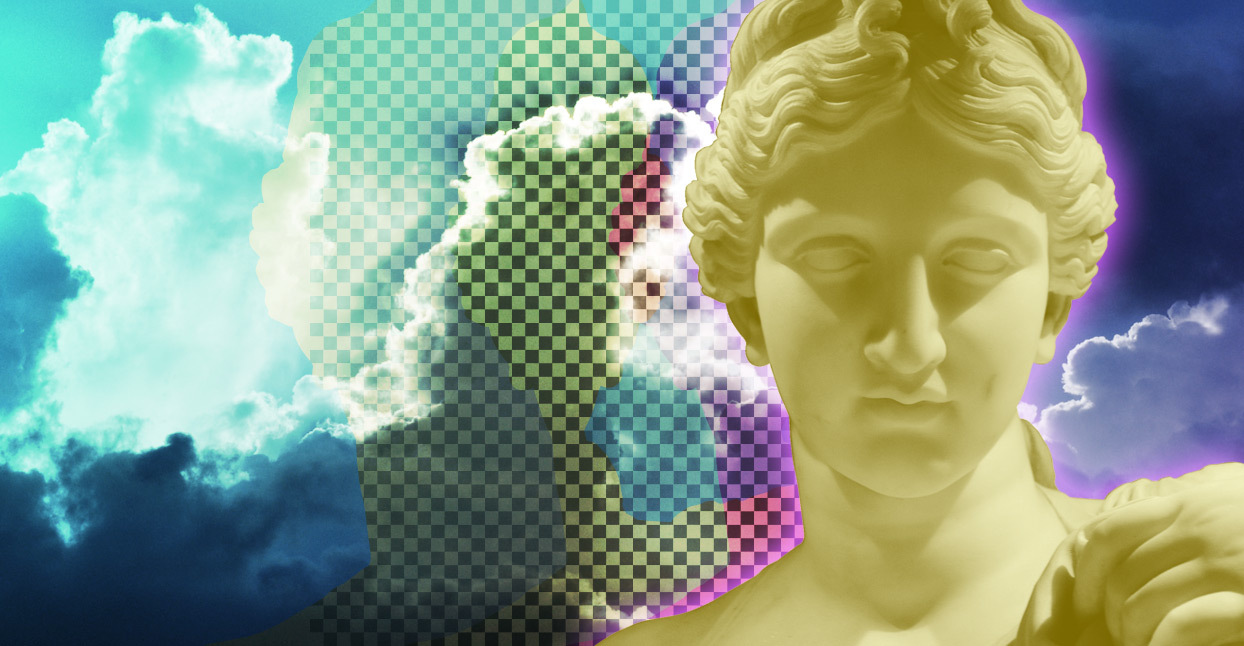 Vaporwave isn’t just a genre; it’s an approach and an attitude—not just to music, but to popular culture. Vaporwave is often identified with particular sounds and stylings—slowed arown hits and muzak from the ’80s and ’90s—yet what’s also essential to it is the highly self-conscious, critical stance it takes to its source material. It remodels and repackages it, adding implicit layers of social commentary.

Vaporwave artists have been quick to branch out, rising and falling in popularity until another supplants them. What began as an innocent practical joke early in the millennium has grown into a fully fledged genre that is entirely self-aware. And despite proclamations that “vaporwave is dead” by artists and critics, it seems that new subgenres, from mallsoft to vaportrap, pop up every day. This is why, in a bid to keep up with vaporwave’s expanding universe, we’ve outlined ten of its most pivotal subgenres.

If there’s one vaporwave subgenre that’s more or less identical to vaporwave itself, it’s eccojams. The subgenre established the very template that most vaporwave musicians used to transform a whole world of forgotten pop culture into a legitimate mode of expression. Beginning in 2010 with Chuck Person’s Eccojams Vol. 1 by Daniel Lopatin (aka Oneohtrix Point Never), it started life as “a very simple exercise.”  In Lopatin’s own words, it saw him “take music I like, […] loop up a segment, slow it down, and put a bunch of echo on it—just to placate my desire to hear things I like without things I don’t.”

Yet if it began as an exercise in plunderphonics, it soon developed into a solid method and philosophy. Artists like Vektroid and Mediafired took the framework it offered and applied it to new songs, sounds and styles, providing the proof-of-concept that it could work outside of a narrow, side-project context. However, aside from enabling the likes of Darksleep and 회사AUTO to create new music using old songs, its sonic manipulations allowed those producers to reveal these tracks in a new light. Using distortions and dissections, it was as if Cyndi Lauper’s “Time After Time” and Mr Mister’s “Broken Wings” were being subjected to some kind of scrutiny. They were being celebrated, mocked and condemned all at the same time, and it was precisely in this kind of treatment that vaporwave revealed itself as a popular culture movement that criticized popular culture.

Sitting alongside eccojams as the second of the genre’s two central threads, utopian virtual was born with James Ferraro’s landmark Far Side Virtual in 2011, before it became synonymous with vaporwave itself. In contrast to the blurred wooziness of eccojams, this subgenre is distinguished by an almost squeaky clean level of sonic clarity. More importantly, it’s also signalled by the predominant use of sounds drawn from the not-too distant history of commerce and computers, such as the iconic Windows 95 and Skype startup themes.

Together, these elements combine to invoke the idealism, optimism and aspiration of the immediate post-Cold-War era. That optimism was quickly crushed by global recessions, terrorism and regional warfare, which makes albums GooglePlex Bionetwork and VIRTUAL UTOPIA EXPERIENCE less inspirational and more subtly disturbing. Their heavily compressed instrumentation and new-age futurism radiate a serenity that can’t help but appear indecent in the context of a still-turbulent world, and even if they and other standout LPs like Home™ and ATMOSPHERES 第1 are captivating listens, their simulated bliss partly comes across as an attempt to distract us from the fact that the promise of history’s end has itself ended.

Extending out of utopian virtual is mallsoft, a subgenre that takes classic vaporwave’s interest in consumeristic detachment and uses it as the thematic basis for spacious ambient music—in the imagined space of the suburban shopping mall. While mallsoft is known to feature the shiny muzak of utopian virtual on occasion, archetypal records like Vacant Places and Yes! We’re Open generally aim to engineer a placid, meandering and cavernous atmosphere in which listeners can get lost looking for that perfect Christmas present. Melodies and chord progressions are kept low in the mix or at a bare minimum in such spare records, with猫 シ Corp.’s Palm Mall being filled largely by mall-related field recordings and incidental noises. The basic mood produced by such directionless and echo-heavy samples is one of floating aimlessly through a shopping center, yet there’s also the tangible suspicion that the intention of mallsoft’s practitioners is not simply to evoke the activity of pointless window-shopping. No, the aim of such psychedelic muzak as Hologram Plaza is also to evoke the sense that consumerism means ‘the mall’ has become less a specific place and more a state of mind through which we experience our own lives.

In parallel with the aimless critical soundscapes of mallsoft, future funk is a subgenre that also strives to wallow in hedonism and excess. That said, the hedonism of Saint Pepsi’s Hit Vibes or bl00dwave’s Distance is based more on nostalgically enjoying the past than it is on imaging a future in which consumerism has satisfied all human needs. This is why the term ‘future funk’ is somewhat ironic, since the likes of Yung Bae’s Bae abound much more in samples taken from ’70s disco and soul than they do in any genuine attempt to craft future-proof music. And while there are some notable exceptions — HOME’s Odyssey, for one — that do endeavor to sound genuinely progressive, the majority of the subgenre remains mired in an enjoyable yet freeze-framed retromania, unable to move forward except by moving back.

Also known in some quarters as ‘hypnogogic drift,’ post-internet is a branch of vaporwave revolving around computerised abstraction and futuristic, almost dystopian soundscapes. Like mallsoft, much of the music is ambient to the point of being subliminal, yet unlike mallsoft, the thematic focus is less on consumerism and more on the infiltration of digital technology into our lives. The best evidence of this 骨架的’s Holograms  and Infinity Frequencies’ Computer Death, whose cold synths and reverb-saturated sci-fi create an impersonal if not inhospitable environment in which people seemingly have little place. Through such frigid environments, other key examples like A Heart Full of Love and 油尖旺 DISTRICT create the impression that post-internet is so-called because it represents how our era is one where the internet and digital media have gone from being merely tools people use, to being the very stuff of their lives and identities.

Sharing some of post-internet’s impersonality, late-nite lo-fi is a subgenre that appropriates ’80s pop and smooth jazz in order to conjure pictures of lonely nights in hotel bars or some anonymous digital avatar. From luxury elite’s syrupy moods to MIDNIGHT TELEVISION’s self-titled EP, it often announces itself via cheesy funk guitars, slap electro-bass and copious amounts of synthesized strings and saxophones. While such an attack might push Local News’ Channel 8 or VECTOR GRAPHICS’ MIDNIGHT LOVE close to sounding like TV theme tunes from the early ‘90s, such records retain a distinctive lo-fi edge that makes them moodier and more atmospheric than they have any right to be. In fact, it’s this very lo-fi quality that takes their apparent amorousness and romance, and fills it with the sense of being distant, alienated, self-absorbed, and, well, a little sad.

While hardvapour (see below) is the most recent of the genre’s spin-offs, vaportrap is another outgrowth that could arguably be taken entirely on its own merits. First coming to prominence with Blank Banshee 0 in 2012, the subgenre is recognizable through its wedding of characteristically vaporwave sampling with the tricky beats and layered synths of trap. Of course, some have questioned whether the skittering 808 sound of Vaperror’s Mana Pool or サイバー ’98’s Computer Dreams are truly vaporwave, yet it’s clear that the fixation of these records on spacey ambience and digital imagery situates them firmly within the genre’s territory. Their rarefied, airy sound and cannibalistic recycling of pop (computer) culture reiterate yet again the concern that human civilisation is losing itself in a simulated world created by its own technologies, and that in this world even human actions, thoughts and feelings are now simulations themselves.

Alternatively dubbed ‘signalwave’, broken transmission is vaporwave at its rawest and most uncompromising. This isn’t so much because high points like Fuji Grid TV EX and OASYS✓✓✓☞❐計算 ソフトウェア & Hi-Fi are hard, aggressive or extreme records, but because their general M.O. is simply to pile long-lost radio and TV clips one after the other. By treating audio from old Japanese and sometimes American broadcasts in this way, such LPs as ▣世界から解放され▣ and Dream Sequins® create sound collages that essentially simulate the experience of channel hopping. They flip from one piece of pop-culture history to another, overloading the listener with information, and creating the impression of disorientation and purposelessness. And much like mallsoft, this impression is often intended as a critique of consumerism, which in encouraging us to consume random objects arguably robs us of any purpose or meaning beyond just such consumption.

Overlapping with broken transmission, vapornoise differentiates itself mainly in terms of the heavy-handed way it manages its source material. In such defining statements as Y. 2089 and Virtual Paradise, this material is subjected to a far greater degree of chopping and manipulation than in broken transmission or vaporwave as a whole, with bursts of noise and static often being interspersed between verses, choruses and sound clips. In Eulogy by Employee#6817, for instance, tightly looped samples are superimposed with all sorts of industrial and mechanical effects, while in the inscrutable 私はライトゼロを感じている, inoffensive pop hits are sonically tortured to the point of collapse. In almost all cases, such musical abuse could be read as the culture-jamming and active subversion of the materialism so much vaporwave passively accepts, and as a blunt portrayal of the damage this materialism does to us without our realizing it.

And when it comes to reactions against vaporwave, there’s no subgenre quite so outspoken as hardvapour. Barely a year old, hardvapour arose out of its parent with such formative albums as Sandtimer’s Vaporwave is Dead, which made a point of denouncing the meek softness and self-defeating irony of vaporwave. Wielding concussive beats and sounding as much like gabber and techno as classic vaporwave, these records laid a foundation that was soon followed by the likes of DJ ALINA with the aptly named MANIAX and WELCOME TO PRIPYAT, PART 2 by KLOUKLOUN.

While some have argued that such clubby yet violent records aren’t really vaporwave, there’s little doubt they share a similar aesthetic and philosophy, appropriating the imagery of largely Eastern-European cultures and subjecting it to vaporwave’s characteristic irreverence and satire.