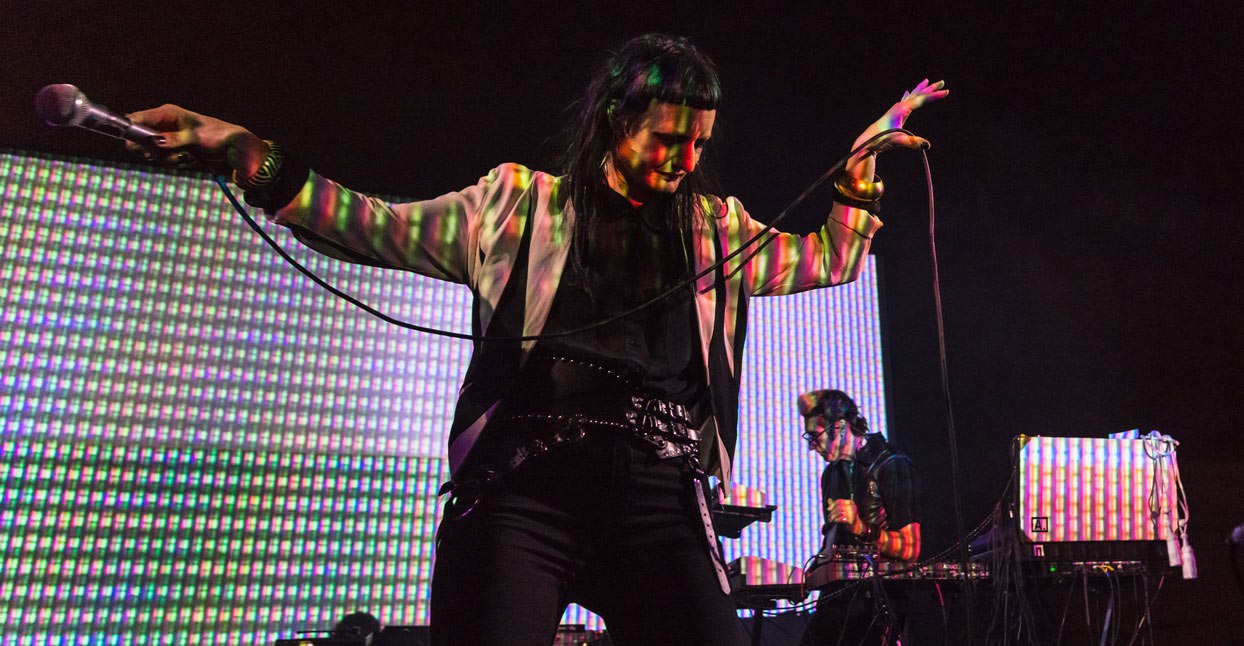 Since their formation 20 years ago, ADULT.—the duo of Nicola Kuperus and Adam Lee Miller—have held tight as one of underground electronic music’s most influential forces. Their dark merger of techno and punk is inescapable, equally liable to be spun at dance clubs, DIY shows, goth gatherings and online mixes. It wasn’t always that way, though: in the late ’90s, when the pair were just getting started, their sound was less a palette than a punchline.

“In ’97, synthpop was a complete joke,” Miller says by phone from the couple’s home in Detroit. “It’s hard for people to know that right now.” In the late ’90s, indie was basically shorthand for guitar-centered rock. As for techno, if there were vocals, they probably weren’t built into a song structure. Plus, Kuperus adds, there was a performance aspect to their work that went against the grain of late-’90s electronic music as well. “An electronic group would never have a live aesthetic,” she says. “They would generally be a dude in a hoodie making electro music or techno music.”
With the exception of few kindred spirits—most notably Dutch producer I-F (of “Space Invaders Are Smoking Grass” fame)—ADULT. were outsiders in their own scene. And then they weren’t: Their single “Hand to Phone,” initially released in 2000, was a club sensation, generating loads of attention for the duo in the early years of the millennium, right as electronic indie was finally making a comeback. In the ensuing years, ADULT.’s sound took twists and turns, always a few steps ahead of like-minded peers like Kittin (then known as Miss Kittin), Felix da Housecat, Chicks on Speed, and the Faint.

As part of their preparation for live shows, Kuperus and Miller like to sift through the ADULT. archives to decide what older material they’ll play. On one such occasion, they had trouble tracking down a tune. An understandably frustrated Miller decided enough was enough, and spent the following week building “the ultimate ADULT. song archive,” a 130-song smorgasbord culled from multiple hard drives. With that, Kuperus explains, came the realization that newer fans might not have heard their music that wasn’t available online. But fear not: they’ve added the bulk of their back catalog (and a smattering of merchandise) to Bandcamp. Read on for a look back on ADULT’s history—as told to Bandcamp by Kuperus and Miller—doubling as a guide to the standout releases.

ADULT.’s story begins with Miller’s 1990’s solo project, Artificial Material.  When Miller was invited to play a few dates in Germany, he asked Kuperus if she could play music and if she wanted to tour. The answer to both questions was yes, so in the summer of 1997, Artificial Material became a live duo for four German gigs. To do that, though, they had to write new material. While on tour, they linked up with the folks from the label Electrecord, who were interested in what Kuperus and Miller were playing live. This precursor to ADULT. released music in early 1998 under the name Plasma Co.

“I would say that the thing that clicked right away is that we’re both subversive somewhere,” says Miller. “We agree on the art over the popularity or the money. It was always about what’s popular right now—what can we do to mess with that?”

By late 1998, Kuperus and Miller had settled on the name ADULT. and you can see their visual and sonic aesthetics taking shape on the first 12-inch single under this name. “Dispassionate Furniture” was released through their own label, Ersatz Audio.

The inclusion of “Dispassionate Furniture” and “The Missing” on the same release was an in-joke about falling off a chair with a missing leg. They would reference that image again on the cover of The Way Things Fall, which uses Kuperus’s photo as the cover art.

ADULT.’s sense of humor shines on “Pressure Suit,” the opening track of 1999’s Entertainment EP, with Kuperus’s dry delivery of the line, “Do you like my handbag? / It’s filled with lots of money.” Kuperus calls it a “fuck you to capitalism” and a “sassy disdain” for showmanship. According to Miller, the song was partially inspired by ADULT.’s occasional stints at parties—attended by “fancy women” toting designer handbags—as well as the numerous jobs Kuperus was juggling at the time (medical photographer, musician, and fine artist by night).

ADULT.’s debut full-length, Resuscitation, is actually a compilation of previously released music. It’s where you’ll find the band’s early ’00s club hits like “Nausea” and “Hand to Phone,” the latter of which was initially released as a picture disc in 2000. An immediate success with DJs, its popularity grew over the next few years. Carl Craig remixed it; 2ManyDJs included it on their now legendary mix CD, As Heard on Radio Soulwax Pt. 2. “Hand to Phone” became one of the quintessential jams of the early ’00s, nearly inescapable if you spent your nights in dance clubs. There were some benefits to that kind of popularity. ADULT. became in-demand remixers, putting a twist on other hits of the era, like Felix da Housecat’s “Silver Screen Shower Scene” and The Faint’s “Agenda Suicide,” as well as classic cuts like “Shari Vari” from A Number of Names and “No Tears” by Tuxedomoon.

But, there’s a drawback with that kind of runaway hit as well. “Suddenly everyone’s perception is that is who you are, that is your sound,” says Kuperus. “That was actually just a small facet of who we were.”

And so, in the heat of that moment, ADULT. released Misery Loves Company, a compilation for Ersatz Audio featuring a stylistically eclectic group of artists that they considered brethren. Miller considers the compilation a manifesto of sorts, a way to “write our own history,” while honoring the community they helped kick-start. ADULT.’s contribution to Misery Loves Company is “Paranoid Vision,” a fantastic track that foreshadows where they would head with their second album.

ADULT.’s sophomore album, Anxiety Always, is also their first full-length comprised of original material. It’s also one of their best, as evidenced by tracks like “Shake Your Head,” Kuperus’s paean to “the passion of forgetting names.” If you heard this on a dancefloor in 2003—or even today, for that matter—it could be the most real moment of the night. Just imagine: It’s packed and you’re sweating under red lights as this tense, electronic groove jolts you. You recognize a person approaching, but, um, what’s their name? “I drew a blank / It’s my mistake,” Kuperus sings. Certainly, Anxiety Always is an album that lives up to its name, contrasting ominous, intense arrangements with tales of awkward social situations. “There’s a lot of energy in there,” Kuperus says of the record. “There was a lot of energy in there to be expelled.”

With their 2005 EP, D.U.M.E., ADULT. ventured into rockier terrain. With deep, brooding baselines and screaming guitars, the band mined the deep recesses of post-punk. The EP also marks the first of their releases on Thrill Jockey; the venerable Chicago indie label had already helped distribute Ersatz Audio releases. “We were overwhelmed,” says Kuperus, by the duties involved with running a record label and their own band.

Arriving just a few months after D.U.M.E., Gimme Trouble coincided with the enlistment of a third member, guitarist Sam Consiglio of the band Tamion 12 Inch. ADULT. as a trio only lasted for one album, but resulted in a solid release that shows off the band’s punk side on tracks like “Thought I Choked” and “Still Waiting.”

ADULT.’s existence straddled the shift between tangible and digital music. They gained popularity at the turn of the century with 12-inch vinyl that was compiled and released on a full-length CD. By 2007, the digital music revolution had taken place and left the industry at large struggling. “It really affected us, since we were very small, DIY outsiders,” says Kuperus. Miller points out that they were on the road a lot. Physical sales of their music weren’t generating much revenue and remix gigs were drying up. Moreover, Kuperus and Miller are also visual artists and their work was falling off balance.  “I think the visual art side of us was suffering greatly,” says Kuperus.

Why Bother? manifested from the frustration that Kuperus and Miller felt. It retains some of the post-punk influence of D.U.M.E. and Gimme Trouble, but they were also channeling their interest in horror movie scores. “We were absolutely massive collectors of horror film soundtracks,” says Miller. That became the “energy” for the record and it would influence their subsequent project, a trilogy of short horror films.

Several years passed between Why Bother? and The Way Things Fall. “We worked for three years as full-time contractors,” says Miller. “We had completely given up on music. We hadn’t written anything. We hadn’t remixed anything.”

They were approached by Ghostly International to rerelease Resuscitation and thought about recording an EP of new music to go with it. “We started writing and we couldn’t stop,” says Kuperus. “It turned into an album, a very unexpected album.” The Way Things Fall offers some of ADULT.’s finest work, like the dark synthpop of “Idle (Second Thoughts).” It’s also an album that brings a sense of balance to Kuperus and Miller’s artistic pursuits. The cover of the album is from a video installation they did in Detroit. Their exhibition “S(h)ituations,” at College for Creative Studies Center Galleries, coincided with the album’s release.

That same year, Kuperus and Miller created the installation “Diptyching” for a show at Mattress Factory in Pittsburgh. The audio component of the piece was released as “Work/Wreck.”

“We have a much healthier connection now to our visual side as artists,” says Kuperus. “There’s a better balance where, for the past few years, we’ve had exhibitions. We’ve made installations. We’ve made videos.”

After The Way Things Fall, ADULT. released Detroit House Guests on Mute Records. That album was a collaboration with a number of musicians who traveled to Detroit and stayed with Kuperus and Miller in their home while recording. It was a complicated process, so, for This Behavior, the duo took an opposite approach and isolated themselves. They retreated to their friends’ cabin in northern Michigan in the midst of winter. Released in 2018, This Behavior marks ADULT.’s 20th anniversary, as well as their first for new label home Dais Records; Kuperus says that they approached from a retrospective standpoint, while striving to make music that would work in a live setting. Balancing energetic club cuts, like the EBM-tinged title track, with quieter moments, like “Silent Exchange,” This Behavior brings together the many facets of ADULT. In a way that both draws from their history and looks towards the future.