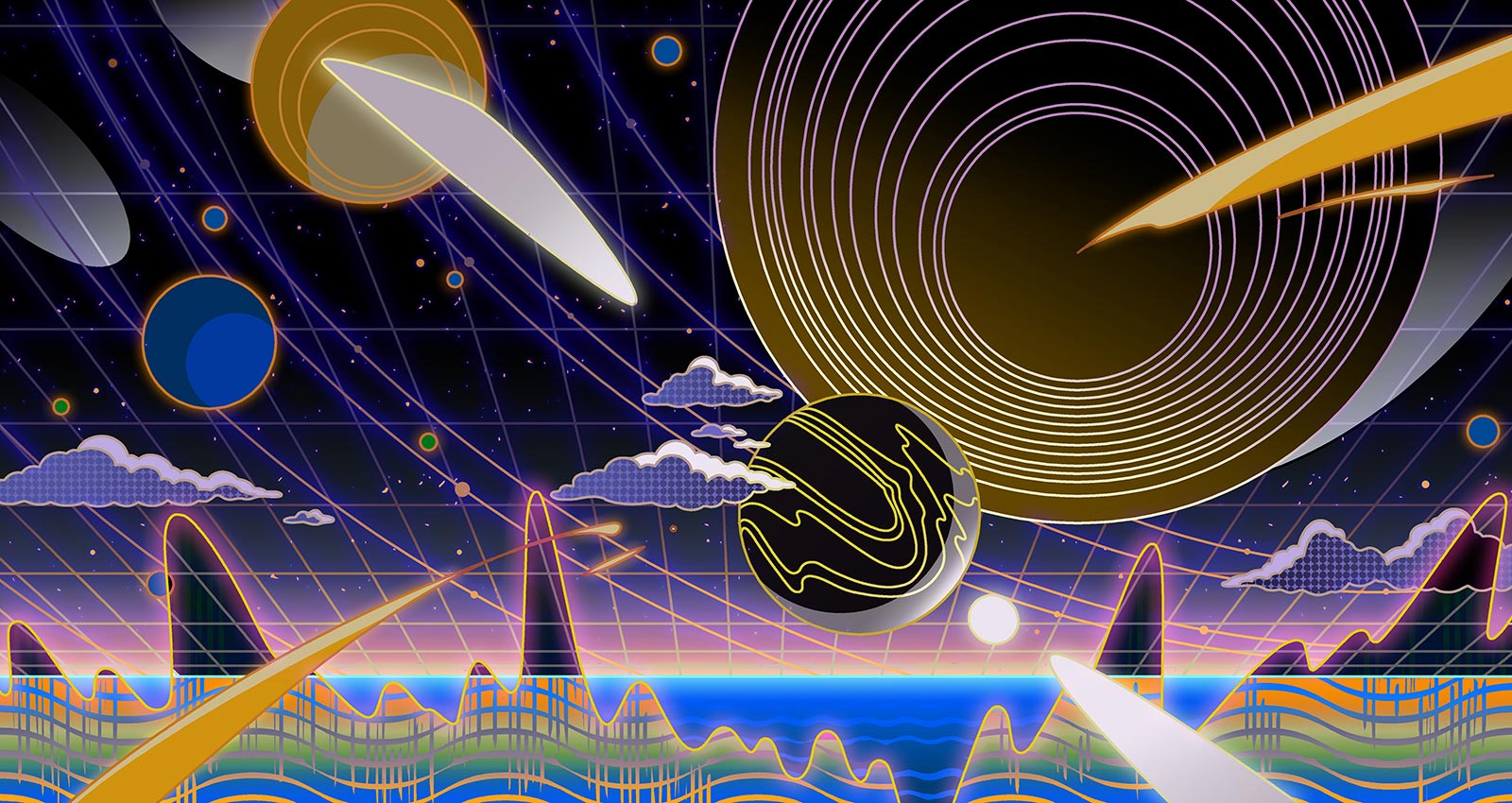 Space music, space rock, kosmische Musik: these are all well-known genres that share a cosmic aesthetic—a sense of expansiveness meant to capture feelings of awe, mirroring our deep connection with the universe that surrounds us, and the thrill of space exploration and science fiction narratives. It’s music that offers fantasias of the final frontier.

But there is another kind of space music, and this type is not a genre, but a concept. This is music that’s literally about outer space itself: its nature and substance, the experience of being in it, its effect on human beings, and the ways we interact with it. The stylistic range of this music is immense; it includes records made by Sun Ra as well as records made by NASA, which not only compiled music to be sent into space (the 1977 Voyager spacecrafts’ Golden Records), but also released the album Symphonies of the Planet, which features sounds captured by the Voyager probes. (Sounds in space? Yes, they’re there.)

There’s even more to explore on this list, which features music about the infinite breadth and depth of outer space, music about crossing almost incomprehensible interstellar distances, romantic narratives about space flight, the ominous power of the universe, and more.

Space is far from silent—even if we need special equipment to hear its sounds. Electromagnetic waves travel through the vacuum of outer space; this is the solar wind that collides with the Earth’s atmosphere and produces both light—the Aurora borealis and Aurora australis—and sound, in the form of low-frequency radio waves. For this deep and delicate project, Kim Cunio created piano accompaniment for the sounds of the atmosphere (generally called “sferics”)—like the sound of lightning traveling through the atmosphere into space, as recorded by the Very Low Frequency receiver at the Halley Research Station in Antarctica. Collaborating with space weather research scientist Dr. Nigel Meredith and Cambridge-based artist-engineer Diana Scarborough, Cunio builds harmonies that rise and fall over individual still points, as the whispers and clicks and scrambles of the sferics dance around her.

William Basinksi
On Time Out of Time

Mysterious and almost impossibly ancient, gravity waves have been traveling through space since the beginning of time itself. The Laser Interferometer Gravitational-Wave Observatory (LIGO) was built to detect these types of waves, and composer William Basinski used exclusive recordings of what LIGO captured as part of this commissioned work. More than just general gravity passing through the Earth, the waves incorporated into this album were produced by the merging of two massive black holes, 1.3 billion light years from here in time and space. Basinski produces ringing, flowing tones, underpinned by a regular, muffled, distant beat. The music sounds like gravity plucking a giant, planetary string, with the overtones rising and rippling out, back into the universe.

Steven Hawking’s great breakthrough in cosmology came in 1974, when he determined that black holes weren’t empty voids from which no energy or information could escape, but that they emitted radiation—what is now known as Hawking radiation. Jeremy Bible’s four-hour opus is something of a metaphor for Hawking radiation taken one step further: What if black holes didn’t just emit charged particles, but sound? Not such a strange idea, as both sound and radiation are types of waves. Music for Black Holes is the sound-poetry of these cosmic…deadends? Doorways? Warm swaths of tones gently glide above then sink below the threshold of hearing, and there’s a meditative stillness evoking a surrender before vast and impersonal forces. Bible calls this, “a map to guide one through the vacuum of space and time,” and it can also be heard as the experience of passing through waves of Hawking radiation as one approaches the event horizon of Messier 31, never to return from an unfathomable destination.

This is space music as deep space music. If a black hole has infinite depths, the universe has practically infinite dimensions, expanding into the unknown every moment of existence. On this eight-hour album, S.E.T.I. (Andrew Lagowski) recognizes that one of the main challenges to interstellar travelers would be maintaining their sanity in the face of that endlessness. Here, he creates a hypnagogic environment for calming relaxation and sleep; a floating pool of sound to separate one from recycled air and the throb and hum of engine noise. Strange signals interrupt the music. Are they mangled communications from a distant and dying Earth? Alien civilizations trying to contact us? Listen deeply and find out.

Back at home, the human race has already established a history of actual space travel, though no human being has yet to make it past the Earth’s protective magnetic sphere. Yuri Gagarin was the first man to reach outer space, in 1961, and in the National Pool’s reimagining of the space race on this concept record, the Soviet Union continues to send cosmonauts ad astra. Psychological preparation is essential for the strange rigors of space travel, and this program was created by the Soviets to “equip our cosmonaut comrades with these sounds. They intent [sic] for solo space travels, mind sharpening and concentration.” An opening patriotic exhortation gives way to a sequence of music meant to focus on each task at hand, including the launch, while also steeling the nerves against nostalgia for home and country left behind, and the tragic and desperately lonely possibility that there will be no re-entry.

As of this year, only around 550 people have travelled into space (the number is approximate, because the determination of the boundary between Earth and space varies from country to country), with only two dozen having passed beyond earth’s orbit. But space travel narratives of science and technology have been in the human imagination for more than a century. Blak Saagan’s (Samuele Gottardello) debut album (and nom de plume) was inspired by Carl Sagan’s evocations of our place in the cosmos, kosmische Musik, and the psychedelic soundtracks of Italian science fiction and giallo films. On this Farfisa-based collection of original songs that emulate library music, Saagan’s vision of space is like Sagan’s: optimistic, joyous, more than a little playful, and eager to suspend all disbelief and indulge deeply in the most expansive possibilities of space exploration.

Joel Giardini
The Age of Space

Darker legacies of the space age lie beneath the extensive shadow of triumph, possibilities, optimism, and progressive ideas for the future: the Cold War and militarization, detritus, disaster, death. Joel Giardini’s concept records stand out both for his dark aesthetic and his emphasis on guitar-based textures. On The Age of Space, rocket and satellite debris circles the planet, threatening to spiral out of control into the atmosphere; launch stations sit abandoned, filled with puddles of water, the aroma of disintegrating paper, and overgrown with weeds; and cosmonauts, off course and drifting away, are lost in space. This is not Carl Sagan’s or Elon Musk’s concept of space exploration, but J.G. Ballard’s.

Kool Keith, Dan Emery, and Chad L’Eplattenier have an entirely different take on the space age: critical, funny, completely iconoclastic. Space Goretex begins with some kind of disaster on an alien spaceship: “I’m deep in the Milky Way/ I’m headed toward the green planet/ My ship’s all fucked up.” Kool Keith is here to tell us about space hallucinations, astronauts at the center of celebrity cults, robotic spaceships, sex in space, space suits and science fiction costumes as fetish objects. This is the space music concept a la Fritz the Cat, meant for a mature audience that looks at the multiple-entendre of a black hole from a funky and wise-ass angle.

Before there was space music in popular music genres, there was Gustav Holst’s classical orchestral suite The Planets, which premiered in the fall of 1918. Christine Ott’s 2020 large-scale piece, Chimères, follows that classical lineage with a composition that imagines the cosmos realized through the nostalgic/futuristic sounds of early electronic musical instrument the ondes Martenot. Ott is an expert on the instrument, and a virtuosic thinker. She uses the 1920s-era electronic keyboard to blend tones that sound like both wordless singing and a lush string orchestra. Ott’s goal, in her own words, is to rub “shoulders with electronic stars” and caress “incandescent planets.” She floats through space, gazing on these orbs from a distance, their lights and colors turning the absolute zero of empty space into the burning cold of ice. This is a tour-de-force of instrumental playing and imagination.

Olaf Stapledon’s 1937 novel, Star Maker, is a science fiction classic. Narrated by a protagonist whose consciousness is projected throughout the expanse and duration of the universe, the book is Stapledon’s philosophical imaging of life in the cosmos. In this composition for chamber ensemble, Taylor Brook sets spoken excerpts from the novel above and against wordless vocalizations, skittering lyrical passages, crunchy timbres, electronic treatments, and field recordings. He draws an explicit connection to one of Stapledon’s most intriguing ideas, that spatial coordinates could be described via musical pitches. Brook represents both the out-of-body sensation and the survey of cosmological mysteries in his music, and there’s a meaningful acknowledgement of the Lenape people and their land—the composer specifies the music was made in Lenapehoking, or the Mid-Atlantic region of the United States—and touches of field recordings offer an intriguing look into Lenape cosmology, which connects the immediate experience of the land and nature to non-material higher universal plains, mediated through the soul.

Space is, finally, out there: it is everything beyond this planet, the universe itself. We may never reach it, but it reaches us, with waves and shudders and bursts that travel across the entire duration of the cosmos. The tracks on Pulse Emitter’s Voids evoke those celestial experiences near to Earth—”Lunar Orbit/Lunar Surface”—and also that of distant, haunting objects like pulsars and quasars. The former is a pulsating star nearing the end of its billions-of-years life cycle, the latter a quasi-stellar radio source—theoretically the massive, hot, compressed energy at the core of a galaxy throbbing with radio wave radiation. Pulse Emitter’s sensual waves flow out of the speakers and spread out into the atmosphere and maybe out into space itself; eventually passing through the mindless waves of these cosmic phenomena, lasting until the heat death or compression of the universe, whichever may come first.