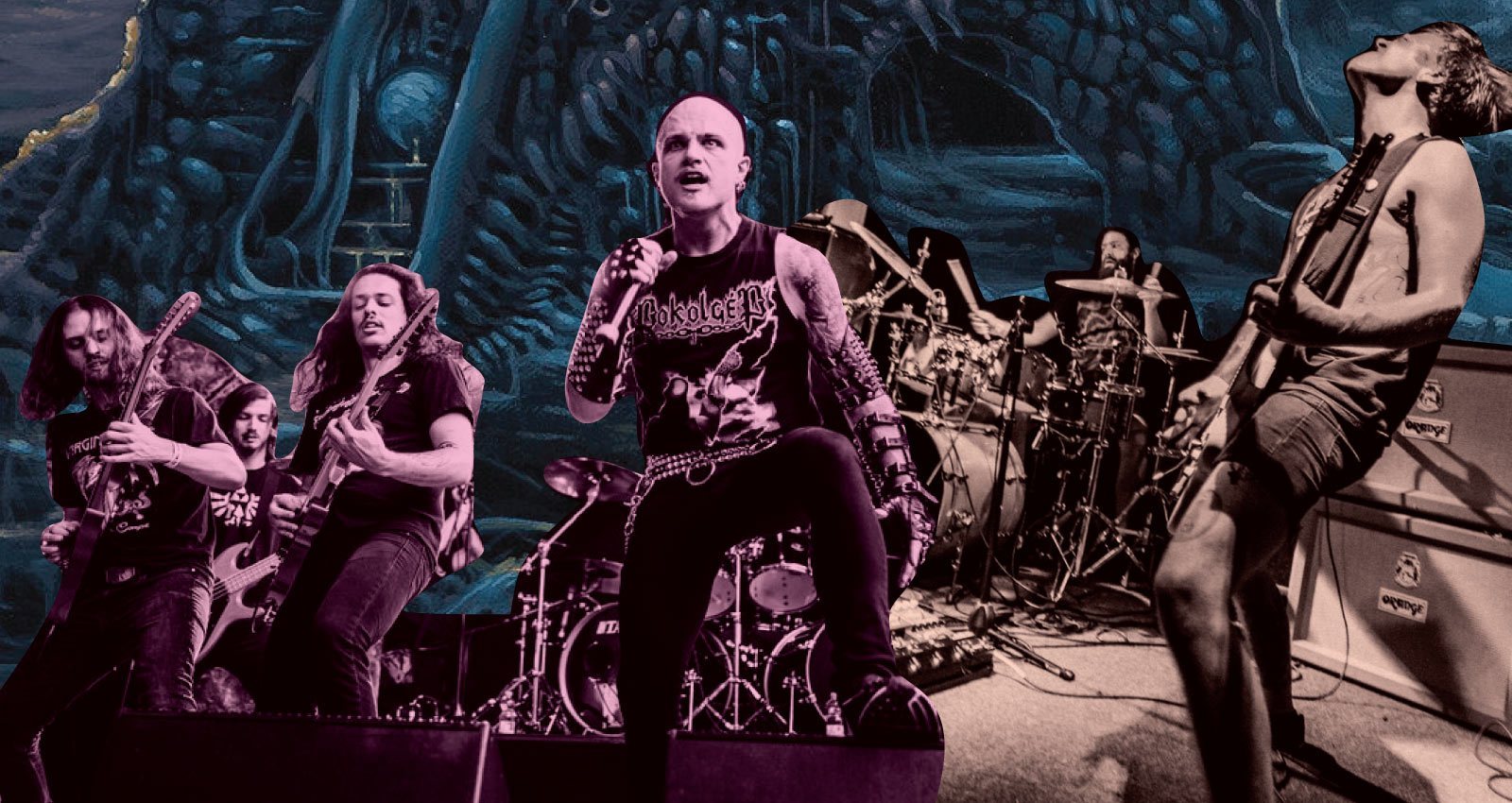 The “Soulsborne” video game series—the dark-fantasy Demon’s Souls; Dark Souls 1, 2 and 3; and the Lovecraft-inspired Bloodborne—are infamous for their difficulty and bloody-minded unwillingness to explain themselves to the player. You die hundreds of times, barely knowing why, or what you are fighting, always suspecting that the world might not be worth saving. Behind it all is a system of barely comprehensible stats and arbitrary, inscrutable game mechanics. And yet, they might be one of gaming’s modern classics. Their influence is showing in Souls-like games from independent developers and, increasingly, major studios.

Technical complexity, unapologetic elitism, a tone that veers from austere darkness to goofy humor: you can see why metal bands are putting down Tolkien and LaVey and picking up their controllers. There has been a rising tide of bands across the entire blackened spectrum of extreme music that have turned to the Souls games for inspiration, creating everything from epic power metal to hideous, twisting death metal. Bloodborne seems to be a particular favorite—its themes of cosmic pessimism, body horror, and reproductive trauma seem to have a special resonance.

We’ve gathered a few of the standouts below.

Let’s start with the big name on this list. Tomb Mold are true giants in contemporary death metal. Alongside Blood Incantation and Venom Prison, they’re one of the few new bands who can stand alongside legends like Death, Cannibal Corpse and Morbid Angel.

They take their name from an item from Bloodborne, a formless something used to create a doorway into a literally infinite warren of dungeons that players can explore forever without ever truly understanding it. Their music, which takes cues from Demilich and Cynic without ever exactly being tech-death, is similarly expansive, and they have long ago graduated beyond using the Souls series for source material. Their latest, Planetary Clairvoyance, deals with both interstellar space and the inevitability of death, but they threw a bone to Souls fans by naming the first track on the album “Beg for Life,” titled after a gesture that you can learn from one of the game’s most memorable characters: a duplicitous spider with a human head hiding in a haunted college.

Aside from the universal theme that power corrupts, the Souls series is largely devoid of politics. This San Diego death metal act took the title of their EP from The One Reborn, one of Bloodborne’s many hideous, disturbing boss creatures. They don’t need to look to the stars for horror though: the album opens with a song about anti-vaxxers called “Child Size Coffins,” and their politics are avowedly antifascist.

Putriscene themselves are upfront about how the series influences them, saying, “The Soulsborne series seemed like the perfect subject matter for our music because of its dense and obscure lore. Thematically, I’ve been able to draw connections to political themes in our music, as much of the lore centers around the insanity and corruption of those who wield power. The series will be returning in a big way in our future work, likely a whole side-A concept on our full length debut.”

Bloodborne’s melding of Poe, Lovecraft, and Cronenberg lends itself easily to death metal, but in the medieval-fantasy Dark Souls series, players can at least attempt to be the sword-wielding champion from a Frank Frazetta painting. They’ll be torn apart by giant rats and possibly doom the universe—but they can attempt it all the same. Heavy metal act Visigoth paid tribute to Dark Souls on their 2019 EP Bells of Awakening, which takes its title from the two bells that need to be rung in the first game in the series before the player can find new ways to die in Sen’s Fortress.

They may be playing in the heavy metal genre, where morality tends to be black and white, but with Dark Souls as lyrical subject matter they have to go dark. And so Visigoth take on the story of the cursed knight Artorias from the first Souls installation. If you’re not familiar with the source material, the EP has two soaring tracks, replete with dueling lead guitars and sing-along choruses; if you know just how dark Dark Souls can get, and you’re still hurt from putting down Artorias and his pet wolf Sif, then there’s a sting in the tail.

“Grogus references a lot of pulp fantasy and horror, but Soulsborne games have definitely drawn our attention in a special way,” says band member Boone Epstein. “This is mostly because we feel that Soulsborne and extreme metal approach their mediums similarly. Both are intentionally abrasive and inaccessible. They leave you wondering why it’s too loud, or why it’s so frustratingly difficult. Why you can’t understand the lyrics, or why the game won’t just tell you what the story is. But if you work to try and piece things together you can sometimes find a joy in interpreting it for yourself and connecting with it on an almost inexplicable, kinetic level. The best metal and the best moments from Soulsborne games both leave you feeling like you’re rewarded for paying close attention and learning how to play or listen to something weird and new instead of approaching it in a conventional way. By spitballing about Soulsborne lore in our lyrics I think we’re hoping to tap into that feeling somehow.”

Before there were humans, there were dragons, and the most hated of all these colossal serpents was Seath the Scaleless. Born deformed and shunned by his own kind, he betrayed them to the humans and was forever damned. The misanthrope behind one-man depressive black metal band Lothric took Seath’s name for his nom-de-tremolo-picking, his act itself named after the location of the third Dark Souls game, a once-beautiful kingdom devolved to ruin.

Black metal is such a natural fit for Soulsborne content that you’d expect a lot more of it, and perhaps it’s coming, or already out there on some obscure tape label. Lothric’s take on it is resolutely old-school, with a focus on riffs and hooks that aligns it more with sketchy second wave and sadly forgotten first-wave black metal than the more experimental, shoegaze-inflected sound of today’s big names.

Since the games pride themselves on obscurity to the point that you’d half expect them to be released on 666 individually numbered tapes instead of blu-ray, let’s finish with a truly esoteric Soulsbourne-inspired band. British Columbia’s Orphanofkos released one demo of ugly blackened death metal in 2018 and receded into the dark, never to be heard of again.

If, as one critic observed, the genius of From Software’s monsters is in their mastery of shape, movement, and texture (much like Jim Henson’s) then the Bloodborne boss the Orphan of Kos might be their crowning achievement. It looks wet and slippery, befitting something that just crawled out of a sea monster’s womb, with exaggerated movements and long, slender limbs.

Orphanofkos pull off a similar trick musically, creating texture from a miasma of guitars and a tom drum that sounds like it’s being played on a plastic bucket, deftly moving from riff to riff, switching gears entirely within one song. Perhaps they are submerged beneath the ink-black water of the North Pacific, but it would be interesting to see them surface again.