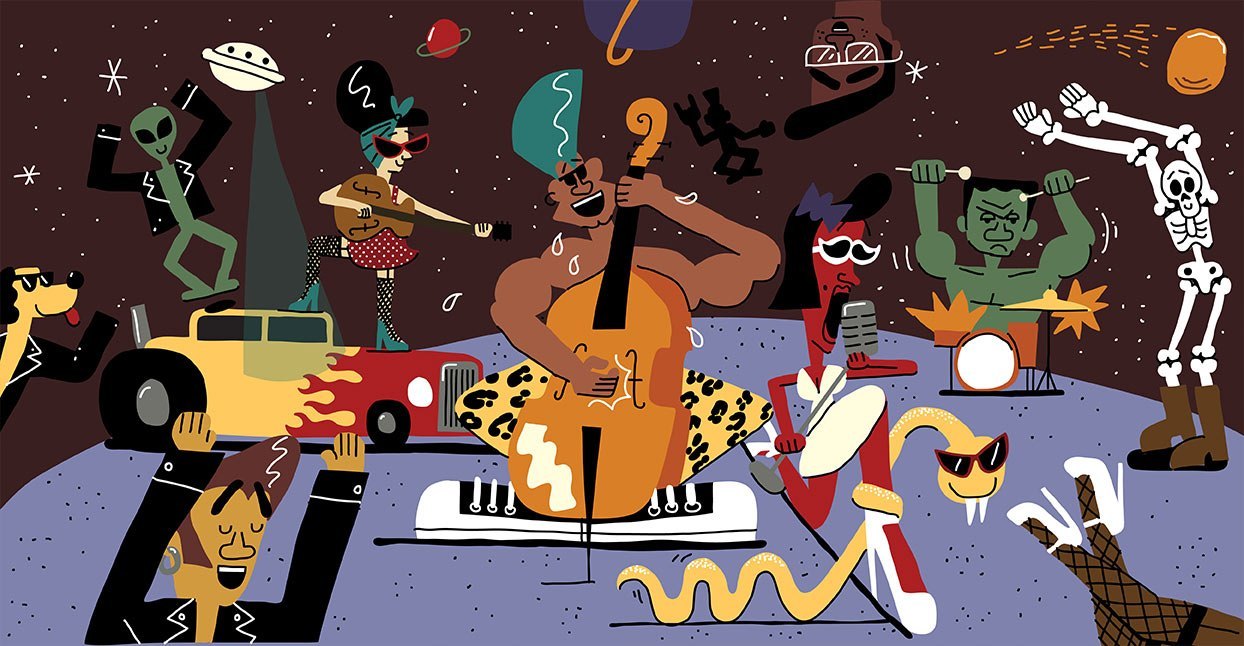 The world of psychobilly is as macabre as it is over-the-top. The genre—although it’s probably more accurate to call it a subculture—fuses rockabilly, surf, early rock ’n’ roll, punk, and hardcore. The lyrics, as well as the general aesthetics, draw on ‘50s sci-fi, fast cars, pinup models, and old slasher films. All of these spring from the genres earliest days: Influenced by bands like the Cramps, psychobilly became something of a movement in early ‘80s London. It was, on some level, a contrarian reaction to the hyper-political ethos of Thatcher-era punk. “London was incredibly tense,” Nate Katz wrote for Perfect Sound Forever in 2012. “Fans of psychobilly wanted none of this … By establishing an unwritten rule that the music was to be apolitical, psychobilly music became a method of escape from the real world.”

“When I was young, around 17 or 18, I discovered the Meteors and Guana Batz,” says Philip Doyle, an Irish-born guitarist, sound engineer, and owner of the psychobilly label, Diablo Records. “There was a big scene in London, and it was centered at a place called the Klub Foot, which was in the Clarendon Hotel Ballroom in Hammersmith. Once a month, there was a big gathering of psychobilly bands. I heard about that through some friends when I was living in Dublin. That got me hooked, so I decided to move to London because of that scene.”

But the most important thing about psychobilly, beyond escapism, is the fact that it’s propelled by a sense of fun.

“In my old band, the Klingonz, we had different styles of dressing up,” Doyle continues. “Sometimes we wore nappies on stage. Sometimes we dressed up as clowns. We had a completely different wardrobe for each show that we did. That was our hook to get people to go to the shows.”

The name “psychobilly” probably comes from the Cramps, who took it from Johnny Cash’s 1976 hit, “One Piece At A Time”—“Yeah Red Rider, this is the Cottonmouth in the psychobilly Cadillac, come on…”—and used it in fliers and advertisements for shows. And while the style at first generated the biggest waves in the UK and US, it gradually spread out to other parts of the world.

“Growing up in Russia, psychobilly is not as widely known as it is in the US, or in other parts of Europe,” says Zombierella (Svetlana Nagaeva), of the St. Petersburg-based band, Messer Chups. “But little by little we learned about it. There are many things to be attracted to—the cool look, leather jackets, denim, and boots. But the main things we dig are the bright and crunchy guitars, the groovy slap bass, the stylish drums, and the wild vocals. It brings an atmosphere of something behind an ordinary reality.”

Psychobilly is also refreshingly egalitarian—women play a prominent role as band leaders and instrumentalists—and multicultural. There are psychobilly bands in places as disparate as the Basque Country, Japan, Northern Europe, and the U.K. There’s also a major psychobilly gathering, the Psychobilly Meeting, each year in Pineda de Mar, in northern Spain.

Below are just a few of the horror-obsessed, leather clad rock ’n’ rollers who have a flair for the dramatic, and a taste for good times.

Messer Chups is a Russian band that started in Hamburg, Germany in 1999. “The band was always a mixture of elements of different genres of rock ’n’ roll,” says Zombierella, the band’s bassist. “That includes surf, spaghetti western, lounge, rockabilly, psychobilly, and others, spiced with a good amount of horror, sci-fi, erotica, exotica, and humor.”

Taste The Blood of Guitaracula incorporates many of those elements—especially surf. The guitar tones are awash in reverb and tremolo, and on songs like, “Magneto,” guitarist Oleg Gitaracula (Oleg Fomchenkov) uses unconventional techniques, like kicking his amp to create a crashing reverb effect. “We use vintage gear from the 1960s,” Zombierella adds. “Like Fender reverb tanks, basses, and guitars, as well as recording on vintage tape machines.”

Messer Chups pushes the campy, B-movie vibe to the hilt—which they consider central to the genre’s aesthetic, and its appeal. “Rock ’n’ roll, when it first appeared, was about danger, something forbidden,” Zombierella says. “It was something that appealed to our low instincts, or a ‘bad taste’ we can call it. These visualizations are thrilling, like good horror movies: fast muscle cars, strange night-into-day adventures, beautiful girl dancers—we think that’s a thrilling mix.”

Screamers & Sinners are from the Basque Country, an autonomous community in northern Spain. Their music is fast paced—the songs on Hypnosia offer one barnburner after another—and the guitar tones, as evidenced on tracks like “Jimboren Abenturak” and “Ratman,” are raunchier than psychobilly’s usual twang. The band also features tenor saxophone and an amplified, overdriven harmonica—which for psychobilly, is unusual.

“Not too many psychobilly bands have sax these days,” Philip Doyle says. Doyle produced Hypnosia for Diablo Records, and traveled to the Basque Country to record the album. He also encouraged them to translate some of their lyrics into English. “I went over to record them and helped them convert some songs into English. I needed something like that to sell it, because most fans of psychobilly speak English.” Now, the band has songs in English—as on the title track and “Go Fuck Yourself”—as well as songs in their own language, like “Arkakuso Stomp.”

The Creepshow
Death At My Door

The Creepshow, from Montreal, describe themselves as a cross between Elvis and punk rock, although their more recent output has less of those ‘50s roots and a more contemporary pop-punk feel. Their lyrical content, once rooted in brain-eating and horror, has evolved as well, focusing on more introspective, personal themes. Tracks like the title track and “Tomorrow May Never Come” are uptempo headbangers—and probably still inspire stage diving and mayhem in their live set—but they’re balanced by somber, quieter cuts like “My Soul To Keep” and the acoustic, “Blood Blood Blood.”

The Ricochets, from the UK, belong to the original wave of early ‘80s psychobilly. Members of the band have also done stints in the Guana Batz, Meteors, and other legendary psychobilly groups. According to their one-time label, the UK-based Nervous Records, the Ricochets started life as the backing band for rockabilly singer Marney Webb, and also did time as a cover band before embracing psychobilly during the genre’s formative years.

Devil’s Highway EP consists of four tracks taken from their 2014 release Chain Dog. The sound is classic psychobilly: clean, twangy guitars, and the lead singer sounds like Elvis. The songs are fast, and despite the clean tones, owe an obvious debt to late ‘70s English punk.

Wild Karma, a trio based in Octon, in southern France started as a grunge band in the mid ‘00s. But after discovering artists like the Stray Cats and rockabilly icon Charlie Feathers, they embraced the twangy sounds and kitschy imagery of psychobilly.

“I watched two films in a loop, Cry-Baby from John Waters with Johnny Depp and Roadracers from Robert Rodriguez with David Arquette,” says Renaud, the band’s guitarist and lead vocalist. The members of Wild Karma use their first names only, similar to “Elvis” and “Elvira” (the Mistress of the Dark). “Thanks to these films, I discovered the real king of rockabilly, Charlie Feathers. [Outsider and solo artist] Hasil Adkins was also on the Roadroacers’ soundtrack. Seeing Reverend Horton Heat in Montpellier was also a great memory.”

Like the Stray Cats, Ronan, Wild Karma’s drummer, plays standing up. The band also uses an upright bass and hollowbody guitars. But finding authentic vintage gear, especially in France, is beyond their means. “The sound is very important for every musician, and the ideal would be to buy vintage gear,” Renaud adds. “Unfortunately, prices are very expensive, and I think spending a fortune on old instruments is not very rock ’n’ roll. But we try to get as close to the sound we love as best we can.”

Bobby’s Bar, from Tokyo, Japan, has an affinity for the campy, horror-movie aspects of psychobilly. The album art is edgier than the band’s actual music, and the sound effects, guitar tones, and arrangements would sound at home on 1960’s TV shows like the Addam’s Family and The Munsters—it’s family-friendly “scary” as opposed to, say, a Rob Zombie-style gorefest. The band is a standard psychobilly lineup, featuring an upright bass in addition to drums and guitar, although some songs, like “Mr. Death Is Coming,” and “Gate of the Terror,” also include instruments like violin, banjo, and saxophone.

Doyley & The Twanglords is a project of Diablo Records label head Philip Doyle. “I started to write surfy-psycho instrumentals,” he says. “I am a big fan of [surf guitar legend] Dick Dale and I love the Tarantino soundtracks. It got me hooked on Link Wray and that kind of stuff. It’s a project I did myself, and I played all the instruments on it. Most of the material was demos that I wrote for my other projects, but I ended up using them as surf tracks instead.”

True to form, many of the tracks on Twang Wars Return… start with ‘50s-era sci-fi sounds, or incorporate dialogue from old films and TV. But despite the kitsch, the music owes an obvious debt to punk. Check out tracks like “Prime Detective,” “Cybermen,” and “Skuzzed Out,” the guitars may be twangy, but the snare hits and drum fills owe a lot more to ‘80s hardcore than early ‘60s instrumental guitar bands. “Psychobilly is a mix of punk and rockabilly,” Doyle says. “Rockabilly, obviously, has that American connection. But psychobilly is more B-movies, ‘50s, horror, and it’s more related to punk.”

Opossum Holler is best described as psychobilly crossover—part rockabilly, part doom, but with lyrics and artwork from B-level horror, they live on the genre’s periphery. Lamb of God guitarist Willie Adler was an early fan of the band, and appears in the video for “Hex,” from their 2015 release, The Devil Made Me Do It.

Like many of the selections in this roundup, Pine and Stone has songs that rip at breakneck speeds, like “Water Witch” and “Stranger To No One.” But Opossum Holler is a complex band with deep chops, and they are also comfortable with more subtle, moodier pieces like the album’s opening and closing tracks, “Pine” and “Stone.”

Hailing from Bowling Green, Kentucky, the band is also the only American act on this list, which is ironic, given the genre’s obvious debt to a specific period of Americana. “I am not sure about that connection to Americana music—I am not sure if I make that connection at all,” Philip Doyle says. “It started off around ’79 or ’80 with the Cramps—who are obviously American—[but then you have] the Meteors, and they are an English band. But psychobilly has got a mix of a lot different genres these days. Ska is put in there now, plus surf, you can mix psychobilly with any type of music to make it a little bit different.”