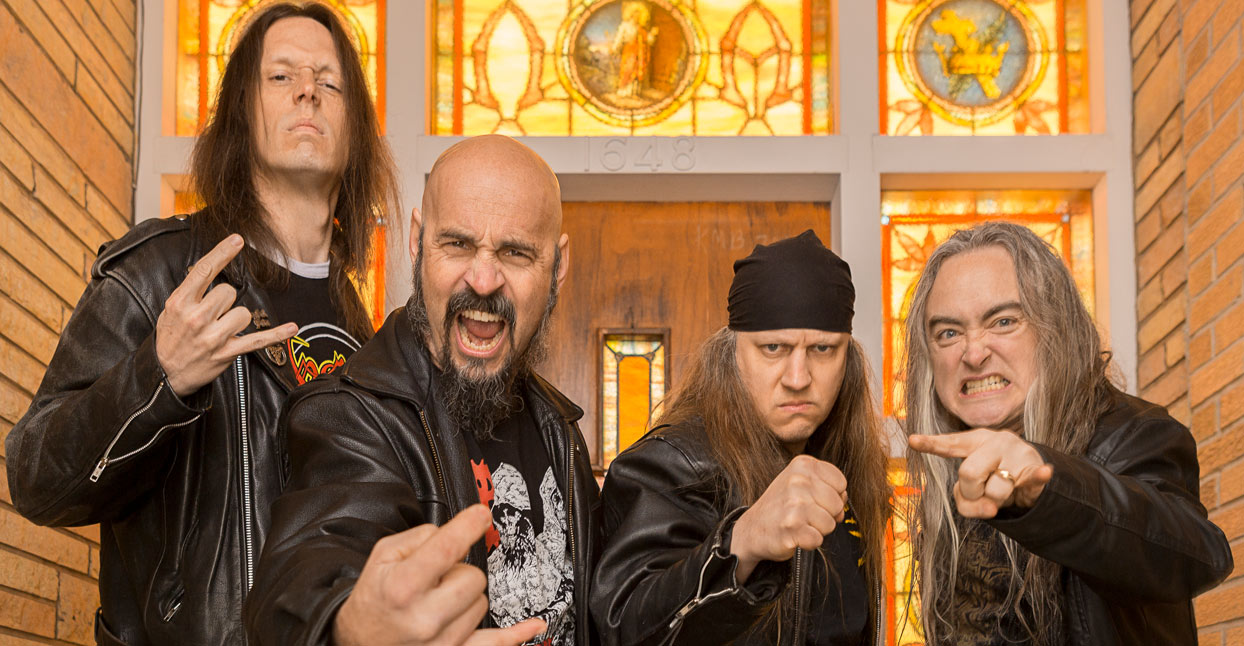 By 1992, just about every major band from American death metal’s first wave had released at least one legendary album. Death, Morbid Angel, Cannibal Corpse, Autopsy, Immolation, Atheist, Suffocation, and Deicide all had future classics on record store shelves when Incantation unleashed Onward to Golgotha on May 5th of that year. Despite being late to the party—and far from the biggest name on the guest list—guitarist and vocalist John McEntee’s band ended up having a delayed Velvet Underground effect; everyone who bought Golgotha seems to have started a band in the last decade.

Onward to Golgotha’s chief innovation was pushing death metal’s sound beyond the cartoonish, splatter-flick realm favored by much of the first wave, and into the genuinely unsettling. By cross-pollinating early USDM’s punishing low end and pinch-harmonic riffing with the atmospheric lurch of funeral doom and black metal’s dead-serious sense of evil, Incantation made death metal darker and more decrepit than it had been up to that point. They’ve been doubling down on that sound ever since, on masterpieces like Diabolical Conquest and the upcoming Profane Nexus, another vital entry in the catalogue of a band who has steadfastly refused to rest on its laurels for 25 years.

It’s remarkable to have Incantation themselves making great music in the midst of a creatively fertile old-school death metal revival that has given the genre some all-time great records over the past five years or so. Onward to Golgotha, Mortal Throne of Nazarene, and Diabolical Conquest are the biggest influences on this scene, but bands all over the world have found ways to corrupt and recombine the Incantation genotype to create almost unimaginable permutations.

Atlanta’s Father Befouled is among the most orthodox bands of the Incantation-worshipping new guard. The songs on their excellent new album Desolate Gods are reverential to the formula laid down by Onward to Golgotha, but the band rips through them with a fury that ensures they never sound like a mere retread. The band’s most potent weapon? They’ve utterly perfected the art of deploying a squealing pinch harmonic as a punctuation mark on a menacing, half-speed riff.

Funeral doom’s glacial crawl is the aspect of Incantation’s sound that has been subject to the most unfortunate mutilation, so it’s refreshing to hear Encoffination make it the focal point of their sound. Where most straight-up funeral doom carries itself with a certain measure of somber regality, Encoffination’s III – Hear Me, O’ Death is an ugly experience, keeping it inextricably tied to the hellish death metal that forms the baseline of its sound. Incantation has always deployed its slow, creeping passages sparingly. Encoffination’s boldness in building whole albums around them is an innovation that has paid off.

In a scene with no shortage of competition, Greece’s Dead Congregation is perhaps the heaviest old-school death metal band of the current wave. The beer-and-shot combo of 2014’s Promulgation of the Fall and last year’s two-song Sombre Doom EP sounds like Diabolical Conquest boiled down to its constituent parts—punishing, doom-inflected death metal without a single unnecessary flourish. The guitar tones conjured by founding members A.V. and T.K. are the perfect vehicle for their sledgehammer riffs, at once caked in grime yet clear enough that you can make out every note.

The Londoners in Grave Miasma might be the best songwriters of this whole malodorous bunch. For all the merits of the rest of these artists, not many of them are in the business of writing songs that stick in your head. But “Purgative Circumvolution,” from last year’s Endless Pilgrimage EP, on the other hand, has legitimate hooks (let’s sing together now: “To the crescent moon of Shiva I crawl”), in addition to its suitably dank riffs.

Despite literally having “Incantation” in their name, Blood Incantation are probably the least beholden to the godfathers’ blueprint of any band on this list. Their progged-out, melodic ambitions are grander—more like late-period Death or Gorguts than Incantation—but it’s their execution that ties them back to the sound of Onward to Golgotha and Diabolical Conquest. Starspawn gets out-there at times, but it always comes back to Earth, rooting itself in some of the best bludgeoning riffs and guttural, McEntee-esque vocals in death metal.

The production on Grave Upheaval’s untitled full-length is deliberately designed to obscure its instrumental and vocal performances. The anonymous duo pioneered “caverncore,” the microgenre that refers to death metal that sounds like it was recorded deep in a subterranean cave. Incantation never went quite this lo-fi, but the intense claustrophobia generated by the songs on their nameless LP shares a clear lineage with Onward to Golgotha. That album’s distorted otherworldliness took death metal to a shadowy plane where it hadn’t yet been taken, and Grave Upheaval pushed its deliberate sonic obfuscation to its logical extreme, a place where bleak, inscrutable texture supersedes the shape of the songs.

Portal doesn’t channel Incantation so much as blow them up and scavenge for pieces of the shrapnel to pulverize in a blender. The Aussies’ improvisation-driven sound is abstract enough to draw frequent comparisons to free jazz, but albums like Outré and their most recent LP, Vexovoid, are death metal through and through. The band’s greatest strength is the stomach-churning, Lovecraftian horror they evoke. In a crowded genre where thousands of artists purport to sound scary, Portal are among the few who actually are.