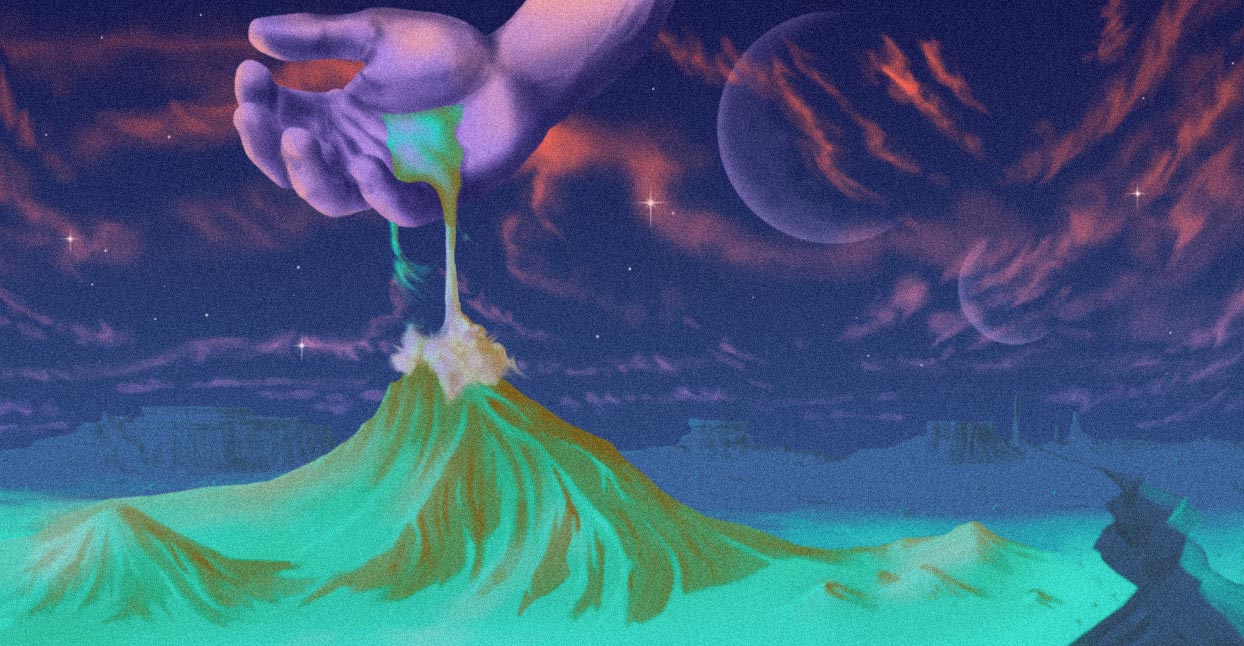 During the boom in science fiction and fantasy literature that hit during the middle of the 20th century, writers began exploring in greater depth and detail the worlds in which their stories took place. From the exotic interstellar cultures of Frank Herbert and Ursula K. Le Guin to the high lore of J.R.R. Tolkien’s Middle Earth and the swords-and-sorcery epics of Robert E. Howard’s Conan The Barbarian novels, these meticulously mapped worlds were more than literary backdrops—they were living, breathing characters in their own right.

This literary approach—known as “world-building”—found its musical analogue in the ‘70s idea of the concept album. Adventurous musicians sought to give their creations the richness and conceptual scope of an imaginary universe. Some groups dedicated themselves to to the work of one particular author—like Tolkien, or H.P. Lovecraft. Others set out to develop their own imagined worlds from the ground up. Christian Vander of the French progressive rock group Magma created an imaginary planet, Kobaïa, and a language, Kobaïan, in which the band’s serpentine space operas are sung. (Magma’s influence is so great that there exists an entire prog subgenre, Zeuhl, devoted to exploring Vander’s universe.) The trumpeter and composer Jon Hassell refined a style he termed “Fourth World”—a fusion of first-world and third-world musics that created something exotic-sounding, but from no particular time or place. Meanwhile, Afrofuturism has provided a rich seam of world-building, as musicians and other creatives sought to find new and radical ways to reframe the Black experience—from the cosmic mythos of Sun Ra and the comic book sci-fi of Parliament/Funkadelic and Janelle Monae’s Metropolis suite, a series of science fiction-inspired albums that draw on the works of Fritz Lang, Philip K. Dick, and The Twilight Zone to sketch out a near-future dystopia.

Matt Werth’s New York-based label RVNG International has a particular interest in the field, having released or reissued a number of visionary records like Craig Leon’s Anthology Of Interplanetary Folk Music and Ursula K. Le Guin and Todd Barton’s Music And Poetry Of The Kesh that experiment with world-building practice. “Beyond listening for a good sonic story, I am also listening for a good album narrative,” says Werth. “I realize the traditional concept album has a negative connotation, but the kind of storytelling that we’ve focused on involves more intimate world-building. So, while there may be entire planets being explored over the course of seven or eight tracks, the perspective is an individual’s and tends to relate the concept to an immediate, shared experience. I love some lofty sci-fi, too, but the more folkloric, homegrown stories relate more to our label’s concepts of community.”

At its best, music can have a transportive effect—to act as a portal to new sounds, new ideas and new cultures. Here are a few records, past and present, that have set out to create a new sonic world from the ground up.

A celebrated record producer who helped bring the debut albums by The Ramones, Suicide, and Blondie into being, Craig Leon has also led a parallel career as a musician, exploring a unique soundworld inspired by a real-life civilization—the Dogon people of Mali in West Africa. Leon witnessed an exhibition of Dogon artwork at the Brooklyn Museum in 1973 and began to dig further into their philosophy, which some believe demonstrates a history of contact with the “Nommo”—extraterrestrial visitors from the Sirius system. A fan of speculative science fiction, Leon set out to imagine how the folk or pop music of these ancient aliens might sound. The result was 1981’s Nommos, an endearingly odd blend of African-inspired rhythms and 1980s technology—LinnDrum drum machine, Eventide Harmonizer, Roland synth.

Following the rerelease of Nommos as Anthology Of Interplanetary Folk Music Vol. 1 on RVNG in 2014, Leon turned his attention to a sequel. The mythology of the Dogon is still an inspiration, but Leon also draws from another source: a 19th century book by William Stirling titled The Canon. “The differences between the thoughts the Dogon espouse and what’s contained in The Canon is that the Dogon philosophical structure is highly speculative,” explains Leon. “On the contrary, everything that’s in Stirling is quite real. You can build an ancient Greek temple from the formulas in the book or lay out the plan of a medieval church. You also find basic Kabbalah, astrology, alternative religion, and numerology. I didn’t really want to dwell on all of those aspects of the book—I’m not trying to give away the secrets of the Masons or anything—but if you’d like it to, The Canon does.”

Montreal producer Phoebé Guillemot’s work as RAMZi feels like a 21st century extension of Jon Hassell’s Fourth World concept: a vision of a sweltering tropical soundworld that smudges together Balearic and kwaito rhythms, animal cries, booming drum patterns, and the occasional snatches of voice, which are sometimes chained together to approximate unintelligible conversation—like eavesdropping on the chatter of interplanetary people. Guillemot has a name for this fantasy isle, “Phobiza”—which lent its name to a trilogy of releases on Mood Hut, Total Stasis, and her own FATi Records. She’s even talked about detailing this imagined land further, creating languages, mythologies, and topographical maps. Still, she contests, the music of RAMZi isn’t the product of any one real-world environment; it’s born out of fusion. “I don’t think I’m appropriating. It’s more integrating,” she told Resident Advisor. “It has to be cooked somehow, it’s not just copy-and-paste.”

Becker is best known for his day job as a mastering engineer at Berlin’s Dubplates & Mastering, and he has worked on some of the best electronic and avant-garde records of the day. On the sly, though, he’s also put his name on a couple of experimental albums that draw on the influence of folk, field recording, and musique concrète to create music that—while entirely synthesized—feels somehow biological and alive. As the name suggests, the two volumes of Traditional Music Of Notional Species explore a sort of speculative ethnography of alien chants and dances—what Alan Lomax might come back with, if he’d taken his tape recorder out to the far side of Alpha Centuri.

Storytelling is one of the fundamentals of hip-hop, although typically those stories are grounded in real-life events or artist biography. On Deltron 3030, Del the Funky Homosapien and Dan The Automator set out to buck the trend. A rap opera set in the 31st century, it follows the superhero Deltron Zero in his battles against a super wealthy capitalist oligarchy, whom he defeats through the medium of rap battle. Del’s rhymes hit new levels of complexity: “Enterprisin’ wise men look to the horizon / Thinkin’ more capitalism is the wisdom / And imprison, all citizens empowered with rhythm / We keep the funk alive by talking with idioms,” he raps on “3030.” But as fantastical as the concept, it’s hard not to read Deltron 3030 as a critique of real-world racism and inequality—a theme that feels more potent with every passing year.

Ursula K. Le Guin and Todd Barton
Music and Poetry Of The Kesh

When Ursula K. Le Guin set out to write her 1985 novel Always Coming Home, an imagined history of a peaceful future society living in California’s Napa Valley, she decided it would benefit from an unorthodox accompaniment. She teamed up with Todd Barton, an electronic composer from Oregon, and the result was an accompanying cassette titled The Music And Poetry Of The Kesh, which used synthesizers, Barton’s own homebrewed instruments, and Le Guin’s spoken word—pitch-shifted to make her sound like an old man, or a young girl—to imagine folk music of the future.

It was convincing. So convincing, in fact, that when Barton set out to claim the copyright on his music, the Library Of Congress were fooled. “They wrote me back to say I’d filled out the forms completely wrong,” he laughs. “They said: ‘You can’t copyright indigenous music, you can say you arranged it. And you can’t copyright the poetry, but you can copyright your translation.’ So I called them, and I said, ‘Wow, OK, I think you missed the boat here.’”

The early synthesizer music of Edgar Froese’s Tangerine Dream often felt like an attempt to capture an extraterrestrial quality through sonics—from the deep-space meditations of Zeit to the sonic terraforming of Hyperborea. On his debut solo album, Steve Moore—synth wizard and one half of Zombi—picks up where Tangerine Dream left off. Pangea Ultima sets out to imagine a new continent of the distant future, which geologists believe will form on earth in approximately three-quarters of a billion years. The muted synth-swirls of “Endless Caverns” and the melodic cascades of “Aphelion” feel like an attempt to capture the rhythms of deep time, even as they neatly excise any sense of humanity from the equation.

On Shelley’s On Zenn-La, the prodigious English cellist and composer Oliver Coates stretches world-building to the brink of credulity. Shelley’s Laserdome was a real-life nightclub in the industrial town of Stoke-on-Trent in Staffordshire, England in the early 1990s. On his third solo album, Coates transplants this nightspot to the fictional planet Zenn-La—a conceptual jump-off point for a suite of mutated rave and skewed sacred music that lands somewhere between Aphex Twin and Arthur Russell. The society Coates describes on Shelley’s On Zenn-La is presented in tantalising glimpses. Of the track “A Church,” Coates writes, “Near the entrance point of a large and ancient sacred space, there’s an oddball acid-funk group with cellist and bass players simultaneously vying for attention. At the far end, a girl chorister sings a floating psalm which speaks to the heart of the planet Zenn-La’s founding mythology.” But from the strange, scrawled hieroglyphs on the cover to the weirdly beautiful music within, this is an album that derives its beauty from its sheer otherworldliness.