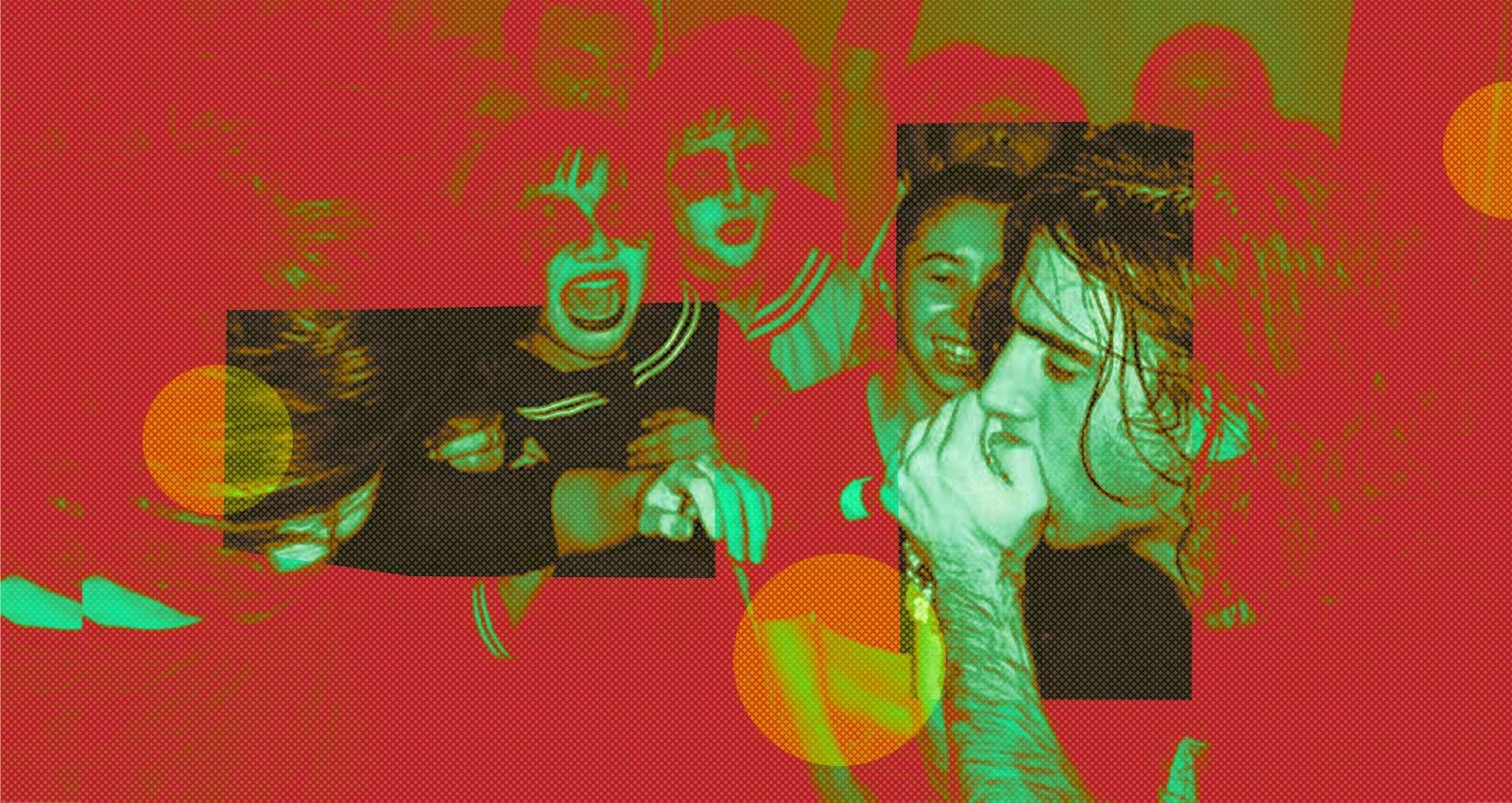 There are two kinds of music that tend to be colloquially referred to as “hardcore”—as a noun—by fans: the aggressive, unrestrained sound of hardcore punk and its offshoots, and the fast and furious breakbeats and bass of hardcore rave. The speed and weight of hardcore dance music has always had something in common with hardcore punk: both forms appeal to relatively niche audiences because of how physically overwhelming such speedy, intense music can be.

These separate strains of hardcore music collide in the work of New York-bred, Pittsburgh-based duo Machine Girl. As their name suggests, the group consists not just of humans and machines, but of hard rock and harder electronic beats. Describing the eardrum-defying work of Matt Stephenson and Sean Kelly is a difficult task; imagine, say, Lightning Bolt playing the blood rave at the beginning of Blade, except you’re watching it on fast-forward. It’s grimy and overwhelming, but there’s also something gleefully cartoonish about Machine Girl, whose sonic and visual mythology are equally pulled from video games and ultra-violent horror films. Each of their full-length albums is adorned with a different disturbing portrait of a dog: a snarling hound with huge fangs or a cyborg Boston Terrier.

For its first two albums, Machine Girl functioned as a solo project for producer and singer Stephenson, a fiber-optic cross-stitch of interrelated dance music subgenres: footwork and juke, jungle and drum & bass. With their third album, featuring the bold taunt of a title …BECAUSE I’M YOUNG ARROGANT AND HATE EVERYTHING YOU STAND FOR, Machine Girl became a duo, adding Stephenson’s long-time friend Sean Kelly on drums. There had always been plenty of intensity to Stephenson’s high-BPM electronic compositions, but Kelly’s unrestrained and almost inhuman drumming adds another dimension to the project, which has steadily grown closer to metal while still maintaining touch with its digital origins.

If there’s any existing analogue to Machine Girl, it’s probably the German “digital hardcore” outfit Atari Teenage Riot, but Machine Girl takes that group’s intense collision of hardcore rave and hardcore punk even further. Their synthesis of disparate genres isn’t the only thing the two groups share, though; like Atari Teenage Riot, who were ardently anti-fascist, Machine Girl’s music violently pushes back against the reactionary forces at work in our world, emboldened by a righteous and enthusiastic drive for collective vengeance. Machine Girl’s music is a fitting soundtrack to a world that’s collapsing—or maybe one that’s raging furiously against its own demise. Take the anger and pain of our world today, speed it up, and bass-boost it—that’s what listening to Machine Girl feels like. It’s a sound that’s just as contemporary as it is ultra-futuristic. Here are a few high points in the Machine Girl discography.

Stephenson’s first solo release feels considerably stripped-down compared to his collaborations with Kelly, providing just a base framework for the high-energy sound to come—the rapid-fire blasts of “Ionic Funk (20XX Battle Music),” for example, could be the soundtrack to a sci-fi shooter game. It’s only natural that Machine Girl would grow to include a drummer, because powerful drums are the basis of their sound, whether off-kilter footwork kicks or classic jungle loops. One of the track titles offers an apt distillation of that sound: “Post Rave Maximalist.” Even as a less dense solo project, Machine Girl is still unafraid to be over the top.

Machine Girl’s second album is its most purely electronic—Gemini plays like a high-speedy summary of the last decade of electronic music, an unstoppable rush of club breaks and stuttering vocal samples. “Out by 16 (ACiDPUNKMiX)” combines dubby breakbeats, acid squelches, and peculiar glitches, while tracks like “Crystalline Chute (Falling 1)” and “WEIGHTLESS>>NOVA>>BLOSSOM>>____” conjure up a feeling of pure, candy-coated ecstasy like only rave music can. Stephenson draws on a familiar palette of classic dance sounds, but the result doesn’t sound anything like the past: it’s what a voice on the album describes as a little bit of “cyberpunk flavor.”

…BECAUSE I’M YOUNG ARROGANT AND HATE EVERYTHING YOU STAND FOR

The addition of Kelly on drums makes Machine Girl sound even more like a cyborg, as his beats reach speeds only robots can play at. In keeping with the group’s evolution into a kind of digital metal, it’s also the first of Machine Girl’s albums to heavily feature Stephenson’s own voice, a jagged scream cloaked, in digital distortion. The delivery can make the exact words difficult to parse, but his fury at the sickness of our world is palpable. The album’s final track, “It Takes a Nation of Millenials to Destroy a Nation of Millions…”, outlines the necessity of youth-led revolution against our current neoliberal hellscape: “This is war, against a dying breed/ Kill their world, wipe the slate clean.”

The second track on The Ugly Art is entitled “A Song Called Clive Barker”—the Hellraiser creator and his tales of tortured flesh seem like a useful reference point for Machine Girl, whose songs are the sound of a body raging against itself—see the jangly, hyperfast synth loops of “Kill Screen,” for instance. As the name of the group always suggested, Machine Girl exists in a future that’s not just posthuman, but post-gender. “Fuck Your Guns” calls for the abolition of outmoded gender stereotypes: “Don’t be such a male, man! … Learn some fucking empathy.” Despite their relentlessness and pure kinetic energy, Stephenson’s productions are still intricate and detailed. On tracks like “Where Were You?,” the duo shifts entirely, slowing down to an ambient crawl, a glistening soundscape that feels like coming up for air.

Machine Girl’s latest record came before 2020 really hit the fan, but it’s a cathartic virtual moshpit perfectly fit for this hellhole of a year. The group’s politics are in-your-face, full of blunt lyrics and blast beats, all of it driving directly to the point; on “Kill All Borders (2020 Worldwide Fucker),” they call for an end to borders and empire. The group was slated to tour with Code Orange prior to the pandemic, which is fitting; on U-Void Synthesizer they’ve truly come into their own as a metal group, with shades of doom and thrash (Stephenson has even taken to wearing corpse paint on stage.) But not every Machine Girl song is punishing; “Scroll of Shadow” is a laser-blasted hyperpop song that wouldn’t sound out of place on the Matrix 4 soundtrack.