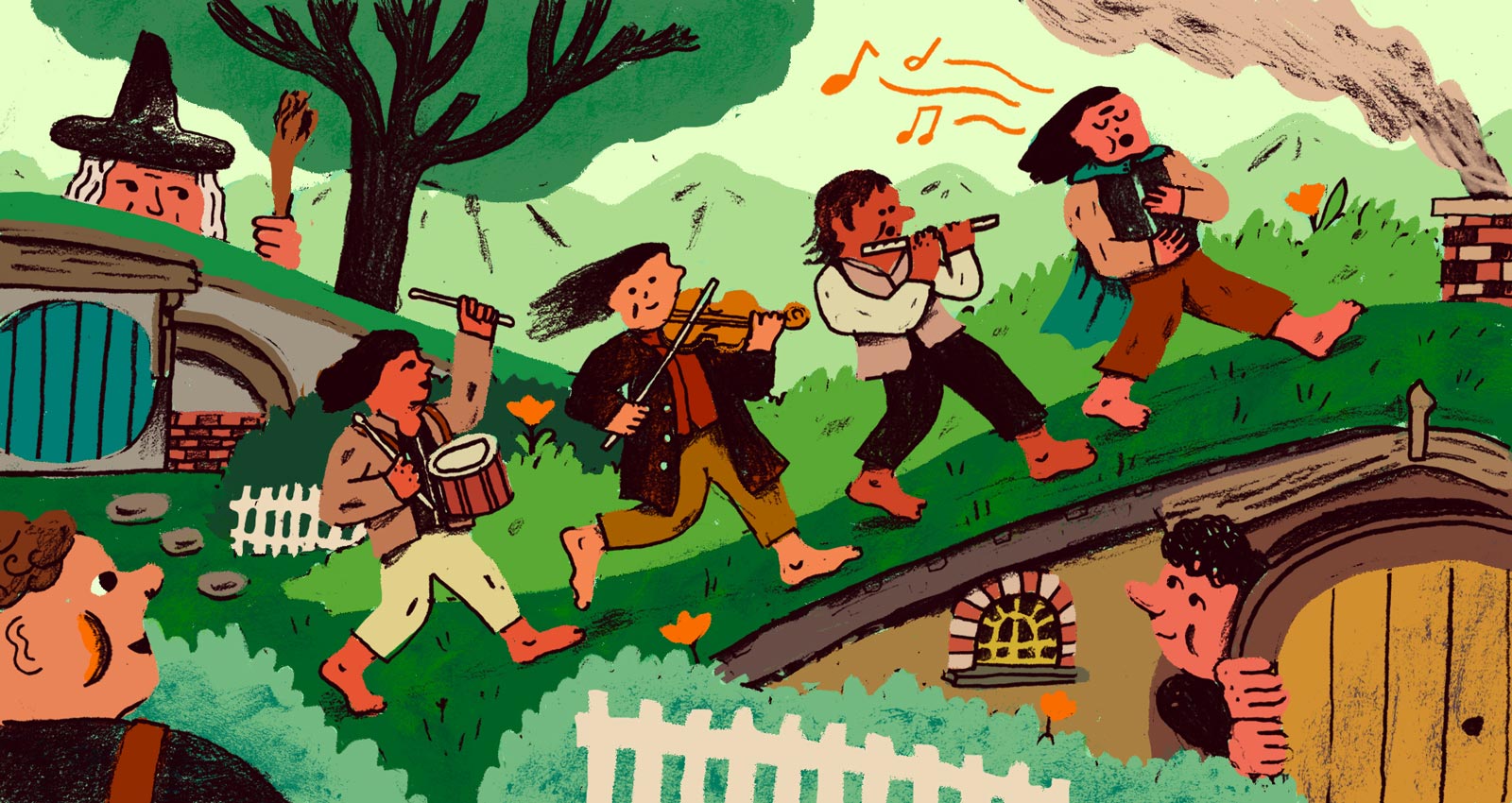 Peter Jackson’s The Lord of the Rings trilogy has only grown in esteem since its initial box office-smashing release at the turn of the millennium, a rare feat for any cultural object that was already incredibly popular. (Good luck trying to find someone who wants to talk about Avatar now.)

The films are already in semi-annual rotation for a lot of fans, a trend that was only accelerated by the emergence of the COVID-19 pandemic and the subsequent lockdowns that forced people indoors. A cottage industry of essays about binging the trilogy in quarantine emerged. Seemingly everyone with a Letterboxd account revisited them in December, resulting in another cycle of essays, this time with a seasonal time peg; Jackson’s films were also Christmas movies. The Lord of the Rings’s moment was extended—and it continues unabated in 2021.

This impressive (and somewhat confounding) buzz cycle overlooks the fact that, for millions of people, The Lord of the Rings’s “moment” began in 1954, when J.R.R. Tolkien first published The Fellowship of the Ring. The series resonated with readers of all backgrounds, but especially the artists. Indeed, before Bad Taste was a twinkle in Jackson’s eye, bands were springing up all over the globe who drew on Tolkien’s books for inspiration. By the ’70s, rockers like Led Zeppelin and Rush, jazz musicians like John Sangster, and folkies like Sally Oldfield had all composed music directly inspired by The Lord of the Rings. Ever since, bands have continued to spring up who root their iconography in Tolkien’s works, especially in heavy metal, where acts like Blind Guardian and Summoning have made long careers singing about the trials and tribulations of hobbits and dwarves.

A rigorous exploration of all those bands could fill the Book of Mazarbul, so this piece will have a slightly narrower—and less serious—focus. Consider this a Bandcamp Fellowship of the Bands, made up of artists who take their names from the nine members of the fellowship. How well do these projects line up with their namesakes, and can they complement each other as well as Tolkien’s nine did in ultimately destroying the One Ring in the fires of Mount Doom? Settle down in your hobbit hole with a nice cup of tea and find out.

In Tolkien’s books, Frodo’s political ambitions topped out when he was Deputy Mayor of the Shire, but this Peruvian post-rock band has the right idea—he should have been king! Their moody build-and-release sound is fitting for a character who went through more emotional ups and downs than any other member of the Fellowship in his role as Ring-bearer. Unfortunately, it doesn’t appear that King Frodo ever made it out of Hobbiton: this two-song demo from 2016 is their lone release to date.

Early in Jackson’s Fellowship, a nervous Samwise Gamgee has to be physically pushed by Frodo just to dance with Rosie, the hobbit who would eventually become his wife. This Samwise isn’t nearly as ambivalent about dancing. The Reykjavik-born, Amsterdam-honed techno DJ builds deceptively dense sonic worlds around insistent minimal beats. Sam might be the most beloved character in The Lord of the Rings, a loyal friend and steadfast companion to Frodo who ventures far outside of his comfort zone to do what must be done. His DJ counterpart pushes electronic dance music to similarly uncomfortable places.

New Zealand has become synonymous with Middle-Earth in the popular imagination since the release of Jackson’s films, but Tolkien’s books are fundamentally English, fixated on the struggle between good and evil and released into a postwar Britain that was looking hard in the mirror after a conflict that killed almost half a million of their countrymen. Like Tolkien, Merrym’n couldn’t be from anywhere else but England. His plain-spoken indie folk songs are rooted deep in the streets of his native Stoke-on-Trent and peppered with cutting observations about class in the UK. Though the Rings books situate Merry as a perpetually exasperated counterpart to his fellow hobbit Pippin, he’s not all cynicism; when given the opportunity, he rides into battle bravely alongside the Riders of Rohan, and ultimately strikes a critical blow against the Witch-king of Angmar. On defiant songs like “Forever Valiant,” Merrym’n sounds like he’s made of the same stock.

Fool of a Took

Pippin is Tolkien’s great tragicomic character: a fool who gets himself and his companions into trouble with his carelessness, only to finally redeem himself by saving Denethor’s son Faramir from a would-be filicide. L.A. singer-songwriter Hannah Moroz embraces Gandalf’s pet insult for this beloved underdog on her sole release under the moniker Fool of a Took, which borrows lyrics set in the universes of not just The Lord of the Rings, but Harry Potter and Game of Thrones as well. Moroz’s singing voice has the same unadorned clarity as actor Billy Boyd’s, and her songs are more than worthy of their association with Pippin.

Recorded in 1982 but not released until 2012, the sole album by cult New Wave of British Heavy Metal band, Aragorn, is a rough-and-tumble affair, played with swaggering looseness and pure rock ‘n’ roll abandon. Tolkien’s Aragorn is the heir of Isildur and the true King of Gondor, but when we first meet him in Fellowship, he’s not unlike the band who borrows his name—mysterious, unpredictable, and dangerous. Throughout the course of the trilogy, he emerges as the very picture of perfection, the noble warrior who never errs in judgment and holds fast to a strict code of ethics as he rises to inhabit the role of king. The NWOBHM Aragorn don’t measure up to that exactly, but they do have a cover of Golden Earring’s “Radar Love” that kicks ass.

There’s not a band named for Boromir on Bandcamp, but there is a band named for the location where his most pivotal scene in the trilogy occurs. It’s near the Falls of Rauros that Boromir tries to take the ring from Frodo, and it’s over the Falls of Rauros that his coffin ship is sent when he dies defending Merry and Pippin. The New England black metal band doesn’t sing about Tolkien, but in an interview with Mainer, frontman Aaron Charles explained, “Primarily the name is supposed to conjure up the image of nature as something powerful, intractable, and untamed. But on the other hand, the events that transpire near this location in Tolkien’s novel brilliantly depict both the virtue and vice that humankind is capable of.” That dichotomy lives at the heart of their songs.

This Greenleaf is probably not named for the obscure surname of the Elvish member of the Fellowship, Legolas, but for another green leaf that aids in the production and enjoyment of their hard-charging stoner rock. Nor does their music much resemble the elegant, precise movements of the master archer, or the delicate beauty of the young Orlando Bloom who plays him. Oh well! You can’t win ’em all. Fire up some Old Toby and let the riffs wash over you.

Perhaps no character in literature has been airbrushed on more vans than Gandalf, the laconic wizard who spurs the events of The Lord of the Rings—as well as Tolkien’s earlier novel, The Hobbit—into motion. Rock ‘n’ roll’s love affair with wizards, seers, and magic men is well-documented, and none stands taller than Gandalf. They’re far from the only musical project to use his name, but the ’60s NYC psych band Gandalf capture his spirit most brilliantly. There’s something mystical and just-out-of-reach about their spooky, folk-derived psych rock songs. Just as Gandalf the Grey passed into shadow after his battle with the Balrog only to return as Gandalf the White, the psych Gandalf only released one album in the ‘60s before disappearing, ultimately returning in 2007 with Gandalf 2, an album built out of lost recordings from singer and guitarist Peter Sando’s archives.

The final member of our Fellowship of the Bands is its only Dwarf, Gimli, Son of Glóin. The UK deathgrind duo who share his name do so unapologetically, going so far as to use samples of actor John Rhys-Davies’s dialogue from the films in place of vocals. Gimli’s style in combat and in conversation is brash, uncompromising, and brutal, and the band reflects that with songs stripped of everything but riffs and breakdowns. This is death metal boiled down to its most distilled form, punishing and unembellished. The Dwarf Lord wouldn’t want it any other way.