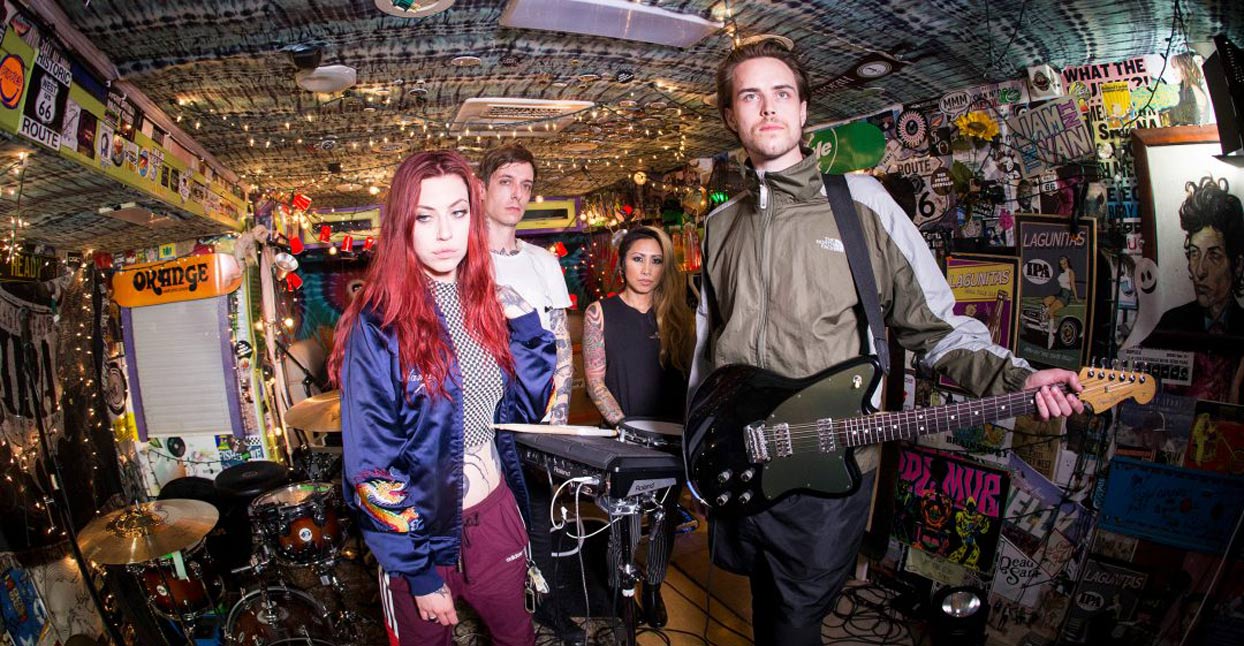 Metal and goth have always gone hand in hand. Whether it was the arena aspirations of goth titans like Sisters of Mercy and Fields of the Nephilim or gothic metal acts like Danzig, Type O Negative, and The Gathering, the two genres have long found common ground on the dark side. And while there is a long history of punk and goth intermingling, the last few years have seen a rise in the number of musicians with a specifically metal background applying their heavy aesthetics to goth and industrial.

Sal “Hellraiser” Yanez played in local metal bands for years without gaining traction. A longtime fan of the goth sound, he decided to explore it full-on and started Cursed Moon—and quickly found himself an audience. It wasn’t just a matter of career success, though. According to Yanez, it allowed him to get out of a self-made artistic cage. “It opens up more freedom on the music-writing process. I feel you can do pretty much anything without being restricted, and the listeners would be open to it all. Since ‘goth rock’ is such a broad style, you can play bits of deathrock, darkwave, post-punk, new wave, dark punk, etc., and it would still [fall under the loose category] ‘goth rock.’ You basically have the room to experiment,” he enthuses.

The last few records from metallic hardcore juggernauts Coliseum had similarly veered in a post-punk direction, and with former frontman Ryan Patterson’s new band, Fotocrime, it’s obvious who drove that change. For Patterson, it gave him an emotional satisfaction that noisier music no longer provided. “I find myself able to express tenderness and subtlety in the context of Fotocrime in a way that I find very fulfilling. Of course, every type of music can be multifaceted in its sound and expression—I’ve written blazingly fast, blisteringly loud love songs and quiet electronic songs full of vitriol and anger. I appreciate the coldness of post-punk and minimal synth and the ability to lose yourself in façade, while still being sincere and personal.”

Both artists have found receptive audiences in both the metal and goth scenes. According to Yanez, “For some people that listen to the band, it’s a style of music that they normally wouldn’t listen to, but it has some elements that they’re into that brings them into listening to it. It becomes something they get hooked on. For the other people, it’s a style of music they already listen to on the side when they want to switch things up. The band just combines things they like from both worlds to give them the perfect set of songs to blast at full volume.”

For Patterson, moving on to a different band from his former, well-respected outift has also paid off. “Many dedicated Coliseum fans seem to have embraced Fotocrime and followed me to this new band. We’ve been somewhat under the radar thus far—we’ve only released our own music in the States—so I’m not sure all of Coliseum’s fans are even aware of Fotocrime. Luckily, we also seem to have found a fanbase on our own merits. It’s great when someone knows your history, but it’s equally rewarding when you’re freshly discovered.”

Here are just a few of the metal bands currently embracing their inner vampire.

Sal “Hellraiser” Yanez was an old-school metalhead with a secret love: goth. He eventually pursued that passion, and the results are both brooding and brutal. Cursed Moon combines Venom worship (his hoarse bark is definitely in league with Satan) with his love of Fields of the Nephilim/Sisters of Mercy arena goth. Yanez devilishly summons huge drum machine beats and synthetic symphonies, lighting up the night with catchy lunar hexes.

As the sole spaceman in cosmic black metal vessel Midnight Odyssey, Dis Pater normally explores the stars. But apparently, even astronauts like to throw on an all-black ensemble and go clubbing. Death Comes Crawling has a lot of the same musical touchstones as Midnight Odyssey—particularly, the all-enveloping atmosphere Pater conjures with his synthesizers. Still, he uses them to channel the spirits of mid-period Xymox and Peter Murphy instead of Enslaved. This feels more intimate, more personal than his interstellar act. Even without shrieks or blast beats, it’s still of a piece with his previous work.

Former Tombs drummer Charlie Schmid goes American Gothic under his alter ego Del Judas, helping to show that goth is more than just an urban phenomenon—the night is darkest in the high desert, after all. Reminiscent of Chris Isaak if he overdosed on Black No. 1, or Fields of Nephilim without the operatics, Schmid brings an intimacy to his stories of regret and wrongdoing, his confessionals echoing off the walls of his Brooklyn apartment like a coyote howling in a desolate canyon.

Los Angeles may have a reputation for sun-soaked glitz, but when night falls, the vampires come out. Deth Crux were sired by L.A. death/doom acts like Buried at Sea and Lightning Swords of Death. The driving deathrock beats bring Fields of Nephilim and Christian Death to mind, but they approach horror stories like the title track and “Lycanthropic Prostitution” with an intensity born from years of making cynical metal fans bang their heads. It’s tough switching genres so completely; Deth Crux draw blood on the first attempt.

Fotocrime broadcast exactly what you can expect with the cover art for Principle of Pain, a clear homage to Ministry’s 1983 debut, the thoroughly mascaraed With Sympathy. A veteran of metallic hardcore act Coliseum, frontman Ryan Patterson fills his full-length debut with tuneful dark post-punk that’ll stick in your head—whether you have a photographic memory or not. Heartfelt and gloomy songs like “Nadia (Last Year’s Men)” and the Sisters of Mercy-esque “Love in a Dark Time” genuinely rank up there with Beggars Banquet’s best.

Glaare has two “a”s in their name, so you know that’s one intense stare—a kick in the eye, if you will. The L.A.-based combo pledge allegiance to the Siouxsie and the Banshees/Xmal Deutschland school of ethereal goth. Drummer Brandon Pierce helped found genre-agnostic heavy proggers Ancestors, but now he concentrates on this project with his wife Rachel (he also plays in Deth Crux and Black Mare; the L.A. scene is pretty insular). While they definitely fit into the darkwave sound, their songwriting stands out. Glaare spread their melancholy mood like how Dracula transforms into mist.

Guitarist Trevor Shelley de Brauw is best known for his work in “instrumetal” band Pelican and the noise-grind side project TUSK, but in 2012 he made a hard left and formed Let’s Pet from the ashes of his post-hardcore project, Teith. These songs take an introspective look at mortality. Vacillating between downer indie rock and synthy post-punk ragers, The Bluff may not be as heavy musically as some of the other bands on this list, but it packs an emotional punch where it counts.

When the Nameless Ghouls left Ghost, it seemed likely that they would shed their anonymity. Instead, two of them have replaced their devil faces and cloaks with bondage masks. Along with the change in look came a change of sound. The one constant? A love of putting a modern spin on retro sounds. Instead of proselytizing ‘70s hard rock, Priest preach the gospel of Depeche Mode and Skinny Puppy with their sinister take on EBM and synthpop. They bring arena rock flair to sadomasochistic hits like “Vaudeville” and “The Cross.”

With current and former members of Municipal Waste, Goes Cube, Revocation, and Freshkills, Publicist UK have unimpeachable metal cred. Of course, they sound like none of those acts. Instead, they indulge in their love of post-punk and even post-rock—the jangling guitar and progressive flourishes in “Blood Relative” would feel more at home on Hydra Head than Beggars Banquet. That helps Publicist UK stand out from other post-punk-come-lately acts—it’s about the nuanced way these pro musicians bring their experience to a familiar sound.